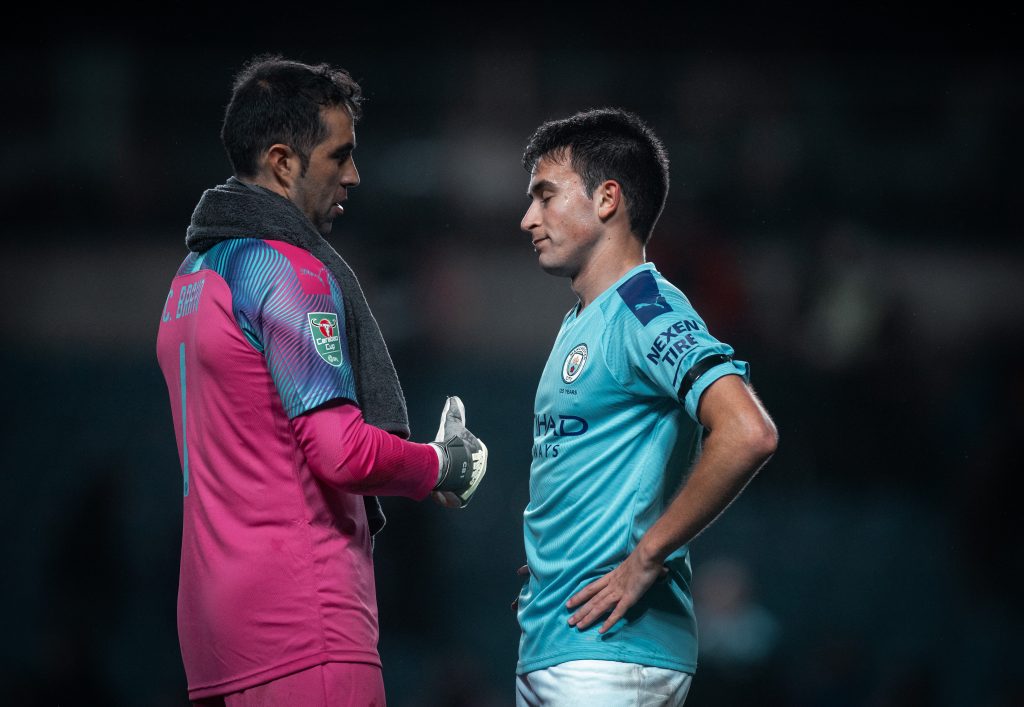 Over the years, Barcelona’s prestigious academy has produced several promising talents. One of them being Eric García, who has spent four years developing under Pep Guardiola. With the early signs showing immense prospect, could a return of Eric García be the permanent solution to the defensive requirements of Barcelona?

When you see a youngster massively respected and appreciated by one of the most decorated managers in the footballing world, then there’s something special there. Pep Guardiola, who is loved and revered by the Barcelona enthusiasts across the globe, has shown immense faith in 19-year-old centre-back Eric García. The teenager is said to have a prodigal understanding of the game. He has harnessed his abilities under Pep since 2017.

Although the opportunities have been slim, the development under the Spanish tactician is being monitored by Barcelona. The world is aware of how Guardiola deals with upcoming talents. He makes them understand the need to be patient while simultaneously providing insightful tidbits as and when required. His famous arm around the shoulder treatment has been received well by several youngsters who enjoy working with him.

“Eric is a guy who likes to know the reason why. He is a guy who, if he makes a mistake, he quickly understands why. Sergio Busquets was like that when he was young”

In addition to midfield gem Phil Foden, Guardiola has been closely paying attention to the growth of Eric García. He has been giving both youngsters more opportunities since the restart, as the Premier League is pretty much done and dusted with Liverpool already crowned champions. The fans have been showering immense praise on Foden and García for how they have seized the moment to showcase their talents. With Barcelona keen on signing Eric and bringing him back to the Camp Nou, the expectations over the teenager have skyrocketed.

For starters, excitement is the first thing that signing the Spanish Under–21 international would bring. Every single club’s fans enjoy watching a youngster flourishing in their first-team. The Catalans have seen the rise of Ansu Fati and Riqui Puig, which have risen the expectations on what the academy can provide. Bringing in Eric García would be another youthful addition to an ageing squad. With a majority of the first teamers in their thirties, adding a teenager to the mix would increase the youthfulness.

A youngblood like Eric would be fired up to impress the fans, and thereby give more energy to the team. Furthermore, there is a clear need for more options in the defensive department. As we all know, Gerard Piqué is 33 and isn’t getting any younger. He has already shown inconsistency in his form, despite still being the undisputed leader of the azulgranas‘ backline.

Even if Piqué has the legs to go on as Barcelona’s first-choice centre-back for a few more years, there’s a need to look at the reality. Gerard needs a replacement on the long run. Even if he can go on and play every game, he needs to have a backup who can take the mantle from him. The upbringing of Ronald Araújo is also a reason to be hopeful for the future. However, the more number of young centre-backs integrated into the first team, the merrier.

The defence, notably centre-back, is one of the most critical positions at any club. Teams always look to establish a defensive partnership between two players who are hardly ever changed. Any other position, including the goalkeeper, can be rotated without affecting the team. Nevertheless, the centre-backs form the foundation of the XI. Moreover, for Barcelona, these players are not only involved in regular defensive duties. They must also understand the nuances of build-up play.

It takes time for any player to fully comprehend the Barcelona way. And that is why it is more suitable to bring in Eric García when he is at a development phase. He has already been nurtured with the club’s philosophy at a very young age, and his growth under Pep would have only been a boost. Manchester City has a similar style of play to that of Barcelona. And so, García would not require more tailoring when compared to centre-backs bought from other clubs.

Is Eric as good as they say he is?

The hype around Eric García is bound to raise questions over whether he is actually good enough. But in his case, he has been praised for the right reasons. Irrespective of whether he’s playing or not, Eric reads the game fantastically. His ability to understand the game from numerous tactical standpoints has seen him grow a maturity beyond his age. At just 19, he has already begun to work on his coaching badges, indicating that he wants to become a manager in the future.

On numerous occasions, García had even shared his tactical insights and observations to Guardiola. The former Barcelona manager was surprised and awestruck with the depths of Eric’s understanding. And so, at such a tender age, the knowledge he has gained has seen him become a highly technical player. Whether it’s on or off the pitch, a player like him would do a huge favour to Quique Setién.

“Three years ago, four years ago, I started thinking that I would like to have the coaching badges for in the future. That’s why I started doing the first course, and then, once I finish this one, I will go for the second one”

Coaches love to work with players who emulate high levels of tactical understanding. They appreciate footballers who can read the games and provide a different perspective. Eric’s work ethic makes him an enjoyable talent to work with. Bringing him into Barcelona’s dressing room would be a huge statement to the existing youngsters. Even if the senior players may seem to show an amount of toxicity towards fresh faces, they would certainly encourage someone like Eric García.

In his eight games so far for Manchester City in the Premier League, Eric has an 80% success rate while facing dribblers. By making smart blocks, interceptions, and clearances, he has shown signs of his quality in whatever brief periods he has played. Playing alongside world-class and experienced footballer like Aymeric Laporte and Fernandinho has allowed him to gain insights from some of the best defenders.

In his four starts for Man City in the league, he has had over 100 touches on two occasions. As we know, Guardiola loves to involve his centre-backs a lot in the attacking phases, and for that, they must be confident with the ball. García is calm and composed when he receives the ball. Eric isn’t hot-headed despite being just 19 and weighs his options before making a pass. He has had a 100% pass receiving accuracy in four out of eight games, highlighting how relaxed he is while dealing with the opposition’s pressing.

Since he is only just entering into the highest level of football, there isn’t a lot of statistics to back his abilities. Notwithstanding, the numbers he’s putting up so far has indicated signs of massive promise. With six games left in the league, the youngster is likely to receive more starts. Having already played against the current champions Liverpool in their recent 4–0 drubbing, Pep is giving Eric opportunities even against the best sides. There is no reason why Guardiola won’t be aiming to tie him to a long-term contract at Man City.

Barcelona wanting Eric García back is a good sign. It’s an indication that the board has been paying attention to the development of the La Masía graduates. That said, there is a chance that Pep would block the Catalan outfit from signing him. As we have already seen how the regime treats the youth, the Spaniard might not want Eric to join them immediately. With Getafe’s recently-signed Marc Cucurella being the prime example of the board’s rough handling of promising talents, Guardiola wouldn’t want García to go through the same plight.

With Pep likely to stay for another season at the Etihad Stadium, he would definitely want to continue to oversee Eric’s development. With Fernandinho ageing, Nicolás Otamendi inconsistent, and John Stones non-existent, Eric might even break into the first-team. Guardiola has already rewarded players like Phil Foden for his patience by integrating him into the squad. With García being another youngster he rates highly, there is no reason why he won’t be featuring more alongside Laporte next season.

Either way, Barcelona should make an attempt to sign him. With an ageing squad, an introduction of youthfulness is mandatory. Be it in this window, or a couple of years later, they should look to acquire Eric’s services. Having already missed out on Matthijs de Ligt, they shouldn’t be letting go of the opportunity to sign yet another promising talent when the time comes.