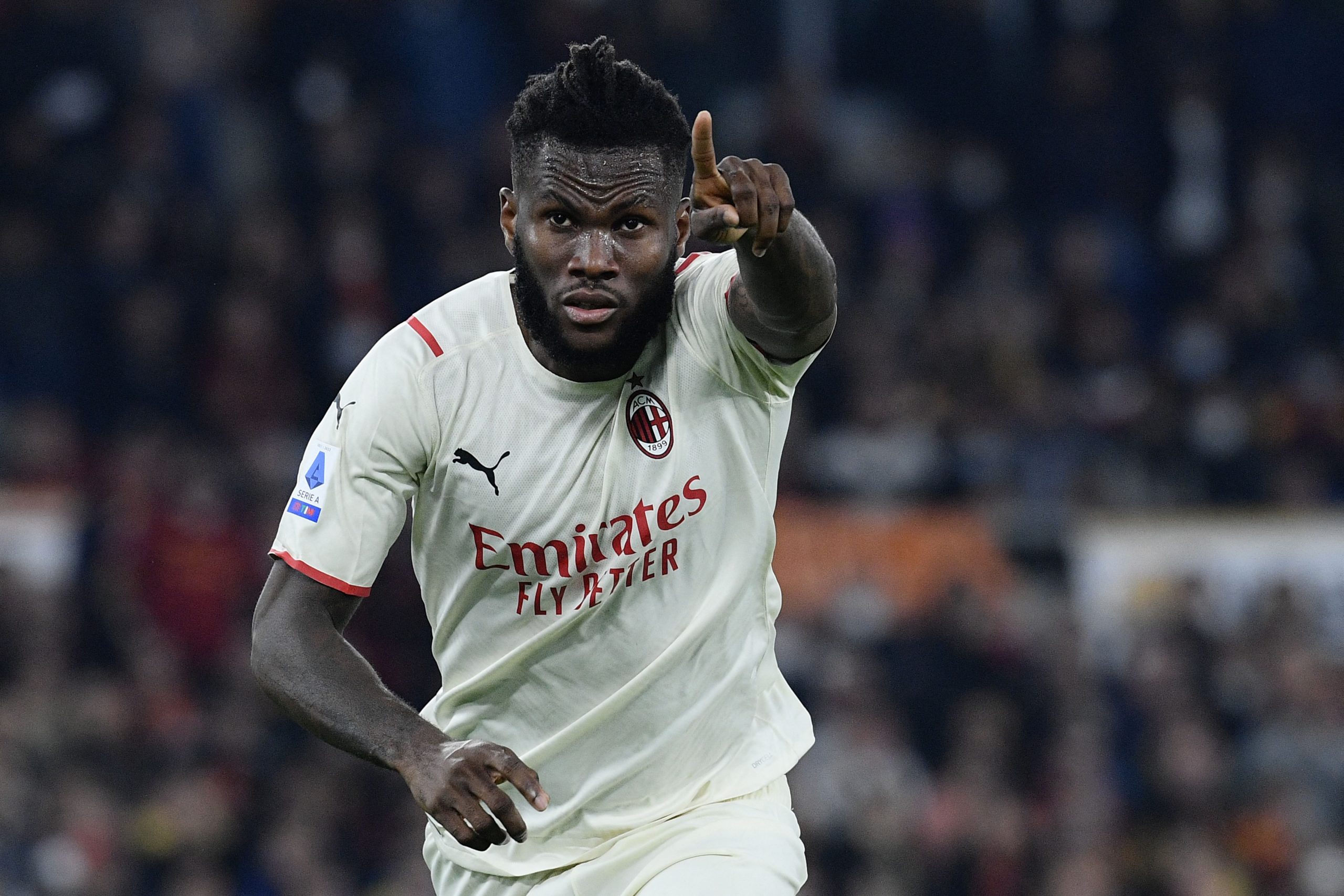 Barcelona have in recent years been synonymous with poor spending habits and comically poor decisions in the transfer market. Subsequent to Neymar Junior’s departure, for instance, the Blaugranes spent over €380 million on three players in an attempt to replace the Brazilian.

Neither of them has done so, with two already departed, and the last on his way out of the club.

Under Joan Laporta, Barcelona are making wiser decisions in the market. Rather than overspending on players that they had no use for, the Catalans are spending – next to – nothing on individuals that intricately fit into their style of play.

One such example is that of Franck Kessie, who has essentially been confirmed as a Barça player for next season.

The Ivorian midfielder has been a subject of interest for a number of European clubs in the top five leagues for several seasons.

Under Milan head coach Stefano Pioli, Kessie has become the best version of himself yet, with Xavi Hernadez keen on exploring the untapped potential he has to offer.

Owing to the fact that Kessie is essentially a Blaugrana, join Barça Universal as we explore three ways in which he can fit in Barcelona.

Barcelona have deployed the 4-3-3 for most of the current campaign, and their history as well. The formation is entrenched into the psyches of the players at the club, who know it like the back of their hands. This being the default setup that Xavi Hernandez is set to follow next season, it is worth exploring how well Franck Kessie would fit inside it.

In our line-up, the Ivorian is a right interior in a midfield trio of Sergio Busquets, and Pedri Gonzalez. His role will be to play akin to Frenkie de Jong, offering his technicality as a sort of box to box player.

At the start of plays, he likes to drop in between defenders in ways akin to a half-back in American football. He is an excellent ball carrier, and uses this ability to move the ball upfield.

Owing to his aptitude at short passing, replacing de Jong in this sense is far from a tall task. Kessie has a 92% passing accuracy from this range.

It is evident that Kessie is more than adept enough at playing various positions across the pitch. Much like de Jong, he can make dangerous runs into the box, though not as explosively as the Dutchman.

Notwithstanding, he can replicate and perhaps even surpass his passing into the penalty area.

As it stands the Ivorian is in the 75th percentile for passes into the penalty area, four places above the Dutchman in a less attack-minded team. At Barça this can be increased exponentially.

With regards to his defensive duties, Kessie is one of the best in the game. He offers a higher press than de Jong, at a higher volume, and with more efficiency.

Contrary to another right interior – at times – in Pablo Gavi, the Ivorian is composed in how he applies pressure, at times preferring not even to steal the ball back but rather deter attackers into moving back into their own halves. The productivity and composure that Barcelona will gain from him is heaven-sent.

Given said defensive proficiency, he can act as a buffer upon which the likes of Pedri and Busquets get a chance to be more attacking.

Kessie seemingly has an extra pair of lungs and can cover the extra distance if necessary, however, he possesses enough positional dexterity to know when and where best to position himself in order to avoid conceding attacks.

In doing this, given someone like Busquets is far from the most mobile player in the world, the Spaniard gets extra room to make his distinct passes and utilise his vision in more advanced areas.

The 4-2-3-1 is the role he currently plays for AC Milan. The Ivorian plays for the Italians on the left side of a double pivot, and that is where he should play if ever Barcelona under Xavi Hernandez opt for the same setup.

In this example, he has Frenkie de Jong beside him, with Pedri Gonzalez acting as an attacking midfielder.

As a pivot, he will be crucial to his team as an asset in possession. In his role for Stefano Pioli’s team, he initiates attacks by dropping into the defence to form a momentary back three.

Once this is done, he pushes the ball upfield either through a pass, or a carry into the middle third of the pitch.

Alternatively, if Milan want to preserve their back four defensive shape, then he can provide support too.

A tactic Xavi employed in his first few weeks as Barça manager was to form a box in between the midfield and the centre backs, which eventually transforms itself into a diamond, much like when Xavi used his 3-4-3.

Kessie offers defensive cover in multiple ways in this setup. He can either move narrow, to disrupt the play and force attacking players into looking for other options in wider areas on the pitch, or move a bit wider so as to provide additional buffer on the left flank.

Cutting off passing lanes has been an incredible asset in his play under Piolo, one which, in addition to his unique physicality, makes him all the more daunting a player to face in a defensive sense.

If at all Barcelona opt to make use of attacking fullbacks, those acting essentially as wingers, then Kessie expertly covers the spaces left behind so as to shield the defence.

This can be especially useful for Xavi when Jordi Alba treks upfield, as the Blaugrana can rest assured that his mobility does not compromise the defence.

Furthermore, Kessie is left-footed, an asset none of the midfielders Barça has can offer. In attacking moves, he acts as a transit between one flank and the other.

In this case, if Sergino Dest were to be making a switch from the right flank to the left side of the pitch, then the Ivorian can provide that passing ability. Being a left-footed player, such passing actions are much more fluid.

His positioning can again be of use when Barça find themselves in situations of immense pressure, as he can move into space to form a passing triangle and circulate possession. This can infinitely be of use to the Catalans, as proficiency at evading pressure is something the Blaugrana have always needed in their arsenal.

This is a less permanent solution to Barcelona’s problems than the previous two setups, however one that can be useful for the Catalans regardless. In this formation, Franck Kessie will play as the single pivot in a midfield trio of Frenkie de Jong and Pedri Gonzalez.

Despite being the holding midfielder in this setup, he will be nowhere near Sergio Busquets with regards to his role on the pitch.

Kessie is dextrous on the ball and in defence, however not at the level that Barcelona would ask for to be relied on solely as a pivot without defensive reassurance.

He will be very much akin to Miralem Pjanic when he played in a three-at-the-back system for Barcelona.

The defensive trio of Gerard Pique, Ronald Araujo and possibly Andreas Christensen should he make the trip to the Camp Nou, will be in charge of providing the defensive support that the team will enjoy less of without Sergio Busquets.

He provides a considerable degree of security for the likes of Pedri Gonzalez and Frenkie de Jong upfield in the absence of Busquets even though he’s not a natural no. 6.

Through tackles and interceptions, which he does at a moderately frequent rate, will be of use here, even though they might not necessarily be needed too much given the presence of the three at the back.

In an attacking sense, Barcelona will not have many games where they are blessed with a team possessing such technical proficiency. Pedri will be the primary creative source for the team, as he has demonstrated an uncanny sense of ingenuity, especially since Xavi Hernandez took over the team. De Jong meanwhile could offer his runs into the penalty area.

As for Kessie, he can be the distributor of the ball all across the pitch. There are options on his proprietary left half of the pitch through Jordi Alba and Pedri, as well as the right through Sergino Dest in the event of a switch taking place.

As a transit between the defence and attack, he will again be of use for Barça with himself sandwiched between Gerard Pique and the Golden Boy winner Pedri.

The possibilities are endless for Franck Kessie in Barcelona. The Ivorian has enough technical dexterity to operate as either one of the midfielders in a 4-3-3, 4-2-3-1 and even the 3-5-2.

Both from an attacking and defensive standpoint, he is more than adept enough to play for Barcelona if given the chance to do so.

Kessie will have to adapt to Xavi’s football, as knowledge on how to work in a 4-3-3 is imperative for one to succeed in his system of play. Regardless, if the Spaniard ever opts to change things up in the midfield, then he can rest assured that the Ivorian has enough dynamism to get the job done.