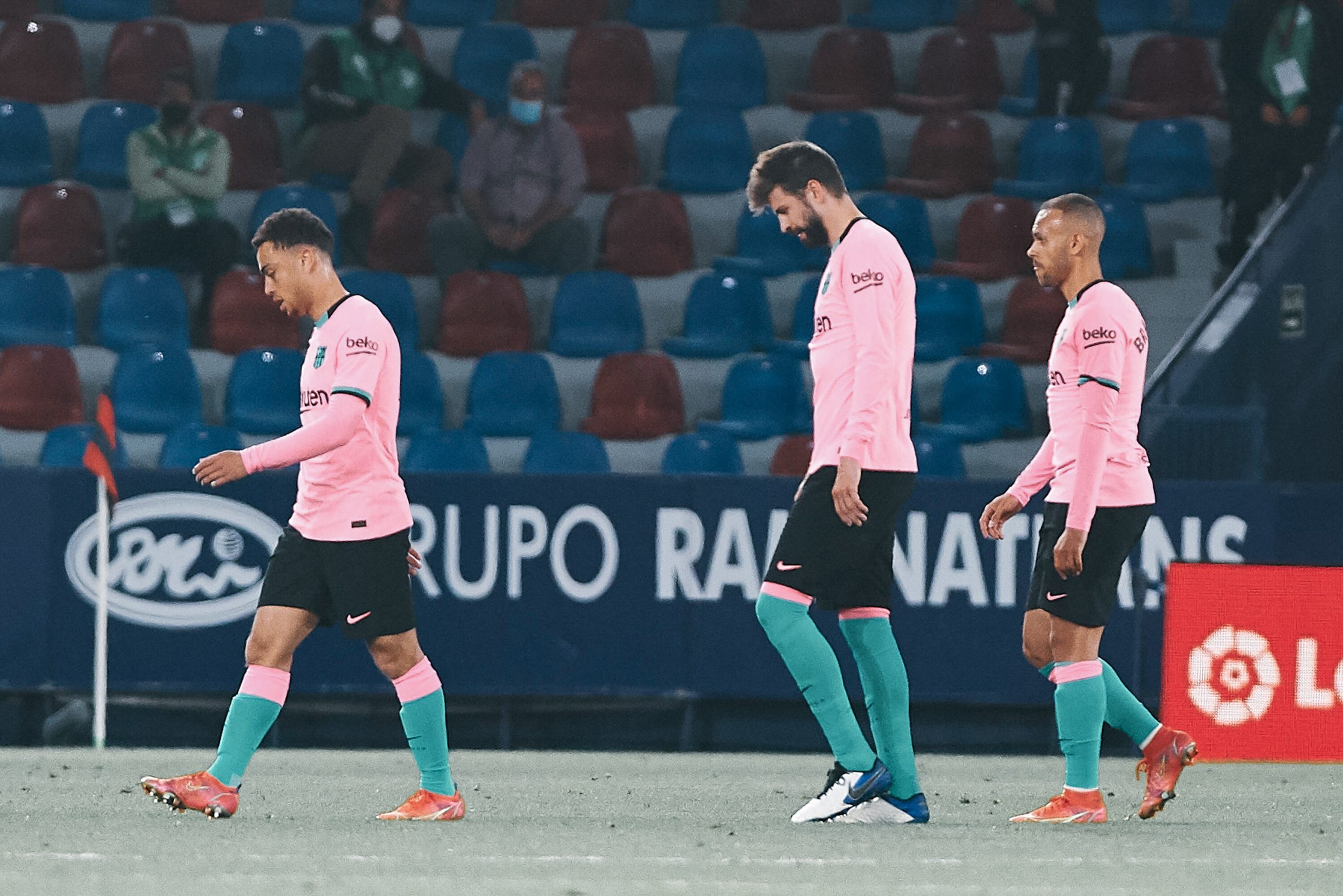 With Atletico Madrid crowned champions of Spain, Culés have been left to wonder just what went wrong in the home stretch of the season. Barcelona were without a shadow of a doubt La Liga’s best team from January to April, winning 50 points from 18 matches.

The final eight matches, which Pep Guardiola described as those where titles are won, are where Barcelona lost themselves. Everything that could go wrong, from the players and their manager in the dugout, did. In this article, Barca Universal explores three pivotal things that went wrong for the Catalans en route to losing La Liga.

A case of poor squad management

Ronald Koeman could pat himself on the back for playing youngsters, but he has to eat the humble pie and admit that even he could have done much better. Utilising youth is only one piece of the puzzle. It is imperative that there be meticulous planning from the manager on all fronts to ensure that game time is distributed adequately to foster an air of growth.

His first big mistake comes in his team selections. The final eight games of a season for any title chasing side must be proceeded with great caution. The team must use a consistent starting eleven, but with adjustments here and there to ensure that the playing style remains the same even with a few blocks being rotated from time to time. That wasn’t at all the case for Koeman and his men.

He constantly held onto the idea that one lineup, and one only, would suffice for the final eight games of the campaign. It was as foolish an error as he could ever make in his management. The obvious knock-on effect on his players was immense fatigue, which itself had a detrimental impact not only on results but also performance.

Bar exhaustion, the line ups themselves barely made sense at times. Against Eibar, for instance, what seemed initially to be a 4-3-3 was actually a 3-4-3/3-4-1-2 with Francisco Trincão and Ousmane Dembélé moving inside as…strikers. The team consistently lacked a coherent and cohesive shape. Players were scattered, confused and unable to truly make an impact wherever they played.

With players’ efficiency diminishing in every game, the ex-Oranje manager had the moral obligation to shake the team up with carefully crafted substitutions. Even there, he failed miserably. Constantly holding onto the unjustifiable belief that changes should be made only as late as the 70th minute in matches, where no impact, if any, can be done. Not only that, but even when subs were well-timed, they were never like for like. Swapping a centre-back for a winger and an interior for a fullback does nothing but distort the team’s shape.

Even with the substitutions, Koeman had his own agendas. “Anyone but Riqui Puig”, he must be saying in his head. Regardless of how visibly fatigued — and thus lethargic — Pedri Gonzales was, he would start every single game (52 in his first season). Riqui adds dynamism, flair and character to every game he plays in. That Ronald Koeman saw it fit to neglect him, for his own personal and petty agendas, and have that get in the way of results is truly baffling in itself.

An inability to hold a lead

Barcelona have only themselves to blame in the home stretch of the season. Their deplorable mentality and sheer inability to hold onto a lead, if not add to it, was one of the biggest reasons for their downfall.

The Catalans have dropped eight points from winning positions in their final eight games of the season. For context, these eight points would have been enough to clinch the title for the 27th time, but instead, it is Atlético de Madrid who had the last laugh.

Expected goals depict a scenario significantly different from that which Barcelona actually found themselves in. Against Granada, the Blaugranas‘ 1.47-0.88 expected scoreline ended in defeat with Barcelona conceding twice from two attempts on goal.

In the tie away at Levante, Barcelona did much better, amassing 3.08 expected goals while Levante had only 1.2. Barça’s inability to defend — both through the faults of Marc-André Ter Stegen and Sergi Roberto — meant that from just a handful of low-quality shots, Los Granotas had a share of the spoils. The home game against Celta Vigo was symbolically worse. Lionel Messi gave his side a lead in possibly his final game for the club, however, the hosts conceded a goal from the first shot against and a second from the two that came afterwards to lose 1-2, despite the expected victory of 2.11 to 0.6.

Ter Stegen has been his worst form this season, and probably ever when Barça needed him most. Truly, conceding seven goals from 2.79 expected goals is pathetic. Either he is completely bereft of confidence, and this is affecting his performances, or he just suddenly lost all his quality. Being rooted to the spot when an easy save can otherwise be made raises many questions about him.

Make no mistake, the goalkeeper isn’t the only one at fault here. The decision making of other key players in the squad in testing moments contributed to the team’s downfall. Against Celta, Jordi Alba had the option to take a shot on an acute angle, without pressure, but instead volleyed it out for a corner kick.

In the same game, Clément Lenglet conceded a quite senseless red card, and as fate would have it, the move that had the visitors score their winner came from just that flank. Martin Braithwaite himself had a glorious chance to retake the lead in the action preceding Los Celestes‘ winner but fumbled his shot, sending it agonizingly wide, brining Barcelona’s poor clinicality back in question.

With all these happening concurrently, is it any surprise that Barça lost a title they all so easily could have won?

Predictability in the face of adversity

Albert Einstein coined the phrase “insanity is doing the same thing over and over and expecting a different result.” Perfect summary of the reasons why Barcelona lost it all in the final few games.

Ronald Koeman’s 3-5-2 was a tactical revelation when it came out. It ensured a constant flux of positional and numerical superiorities in the pitch and from all lines. If French poet Charles Baudelaire metaphorically took mud and turned it into gold, then this Dutch alchemist did the exact opposite with his team.

Once the tactical flaws of the setup were brought to light, all and sundry lined their teams up accordingly to stop it. Eibar, for instance, had a starting eleven, a setup and a course of action so neatly arranged that they in 20th tactically outclassed a team in third. Barça could do nothing to progress into space, resist the press, or craft chances, symbolised by their null expected goals value at halftime. The 4-3-3, 4-2-3-1, 4-3-2-1, 4-3-1-2 were all on the cards, but he simply decided not to change anything about how the team was set up.

Koeman’s cluelessness also got in the way of performance. With his back against the wall, the Dutchman was simply incapable of conjuring anything up that would benefit the collective. Such tactical limitations have no place in a big club, but they showed their face far too often. As such, valuable points were lost because his ego couldn’t accept that he was wrong about his tactics, and his tactical scope could do nothing at all to improve the team when it needed a boost.

Losing the league was a collective effort. Koeman constantly let his agendas get in the way of performance, and the players themselves did a great deal to let him and the team down the best they could. The season could have had a much better ending, but a team like this should be the last one to clinch a league title. This team is not the best in Spain.