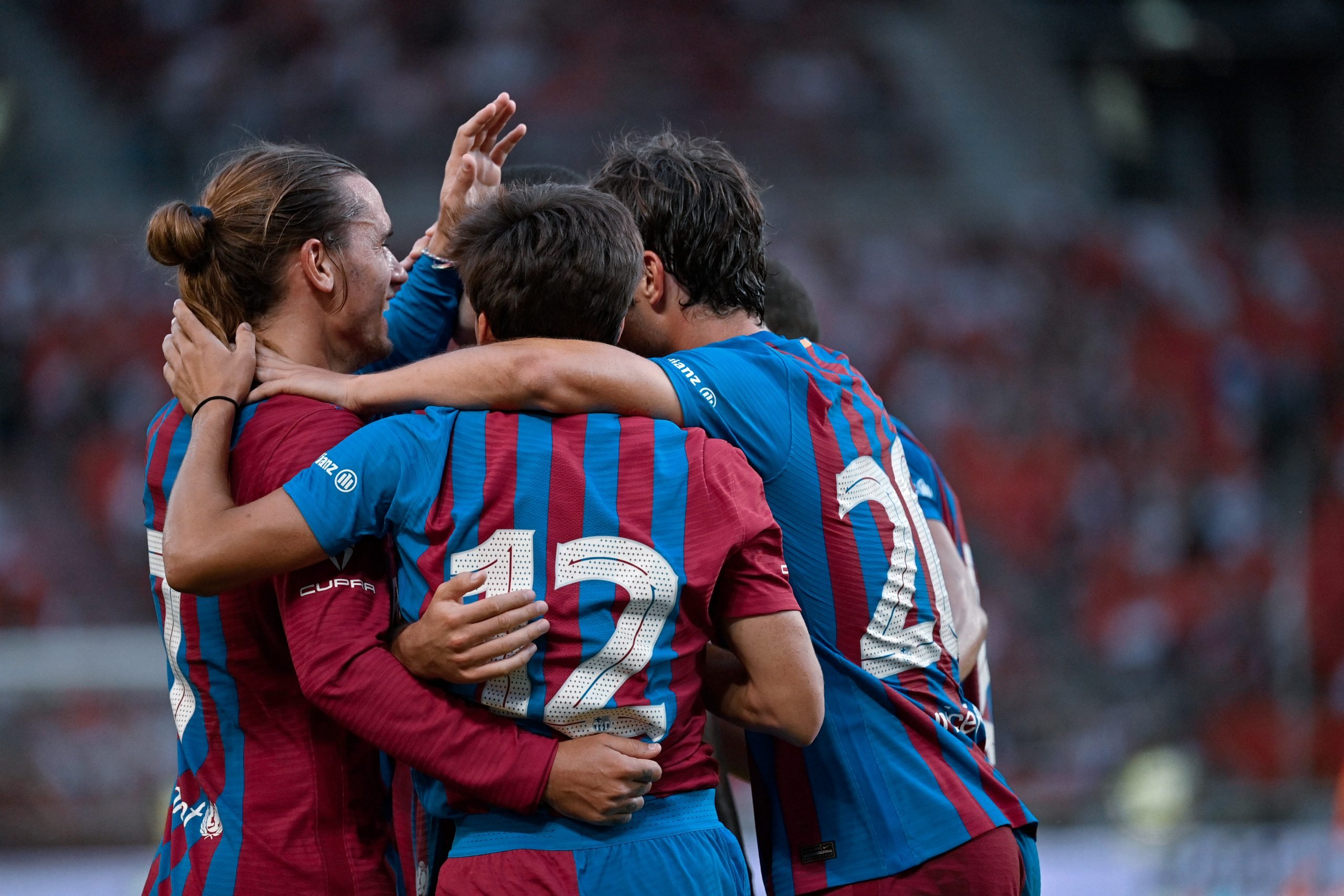 Following two consecutive victories in the Estadi Johan Cruyff, FC Barcelona followed up their good run of form with yet another convincing win, this time away from home in their third friendly game of the season.

Ronald Koeman made a host of notable changes to the starting eleven. Riqui Puig, Samuel Umtiti, Rey Manaj, Martimer Moreno, Inaki Pena and Alejandro Balde were taken off the team. The most important change came in the inclusion of Memphis Depay for his first start in the Garnet and Blue of Barça.

Against a quite lively and hostile crowd despite the unimportance of the tie, it was Depay who opened the scoring. Youngster Yusuf Demir doubled the lead before halftime, and substitute Riqui Puig closed the game off with just under 20 minutes of the game left to play. In this article, join us as we explore three lessons learnt from the clash at the Mercedes-Benz Arena.

In pre-season games, the result naturally matters considerably less than in a league or cup fixture. Nevertheless, Barcelona have been able to win three games in a row, and this too in a compelling fashion.

The Catalans calmly dispatched local rivals Nastic de Tarragona and Girona, scoring a combined total of seven goals, conceding just once. Against Stuttgart, the Blaugrana scored a further three, and this too while keeping a clean sheet.

So far, Ronald Koeman’s side has averaged no less than 66% of the ball in matches. In addition to this, the Catalans have taken an average of 15 shots per match, with another six on goal.

It should be noted that while Barcelona were not the most brilliant of sides defensively yesterday evening, they ensured that their opponents would never get a chance of respite.

Stuttgart failed to take a single shot on goal, while they themselves conceded six from nine shots aimed at theirs. Barça made the most of their offensive strengths by being as attack-minded as possible, and clearly, it paid dividends defensively.

More than the result, a very encouraging performance from Koeman’s side.

At a club like Barcelona, the midfield is at the heart of all operations, both offensively and defensively. While a pre-season game, neither the trio that started nor that which finished the game disappointed by any means.

Ronald Koeman opted for the exciting trio of Frenkie de Jong, Nico Gonzalez and Pablo Gavi in central midfield. As is usually the case, the Dutchman was a driving force going forward. He cut through the defence like a hot knife through butter, always making sure to create some form of superiority after he completed a ball-carrying move.

In addition to this, it was his sumptuous long ball quarter-way through the game which unlocked the opposition defence.

As for his midfield partners, they boasted the composure and dexterity in passing that has come to be known with the academy. From an offensive standpoint, Gavi was phenomenal. His distribution of the ball to the wider areas was reminiscent of Pedri, and so too was his defensive actions, as was the case in the final minute of first-half stoppage time.

As for Nico, he brought out his inner Sergio Busquets. His equanimity under pressure, fine positioning and eye for a pass would give off the impression that he had been a midfield veteran when in reality, he is just 19 years of age.

In the second half, while only in cameo roles, Riqui Puig, Sergio Busquets and Miralem Pjanic were sublime. In his attacking role, Puig did his best work to deliver the final ball and even found himself on the scoresheet after finding himself on the end of a crisp pass from Antoine Griezmann. Busquets made a few tactical fouls, but beyond that, he orchestrated play and maintained balance after coming on.

Pjanic did a fair job in central midfield, keeping a decent amount of possession and providing defensive reassurance as well.

Overall, a reassuring display from the midfield.

3. Depay to the rescue

On his first day as a starter for Barcelona, Memphis Depay did not fail to impress. After a rather silent first few minutes, he settled into the game and soon took control of it. The Dutch forward dropped deep into the pitch to collect and maintain the forward circulation of the ball.

In Ligue 1, he would receive an average of 11 progressive passes per match, the third-highest number in all of Europe. His forward runs into space attracted several long balls and crosses into the box. It was precisely in this fashion that he scored his goal.

Taking advantage of the lack of focus from his markers, as well as his off the ball skill, having seen Frenkie de Jong’s brilliant long ball, Depay quickly made a run into the box. He calmly and expertly controlled the ball, delicately made a skill move over the head of an on-rushing defender, and volleyed the ball into the back of the net to open the scoring.

With less than ten minutes until the end of the first half, Depay was once again at the start of a chance. This time having collected the ball inside the penalty area, he made a perfectly timed backheel pass in to Antoine Griezmann’s path, and he followed it up with a low cross into Yusuf Demir, who himself got his first Barça goal.

In addition to his goal contributions, his overall presence was heaven-sent. He took on defenders, went into pockets of space as well as created them, and was bold enough to take shots on goal, an issue Barça suffered with for a significant portion of last season.