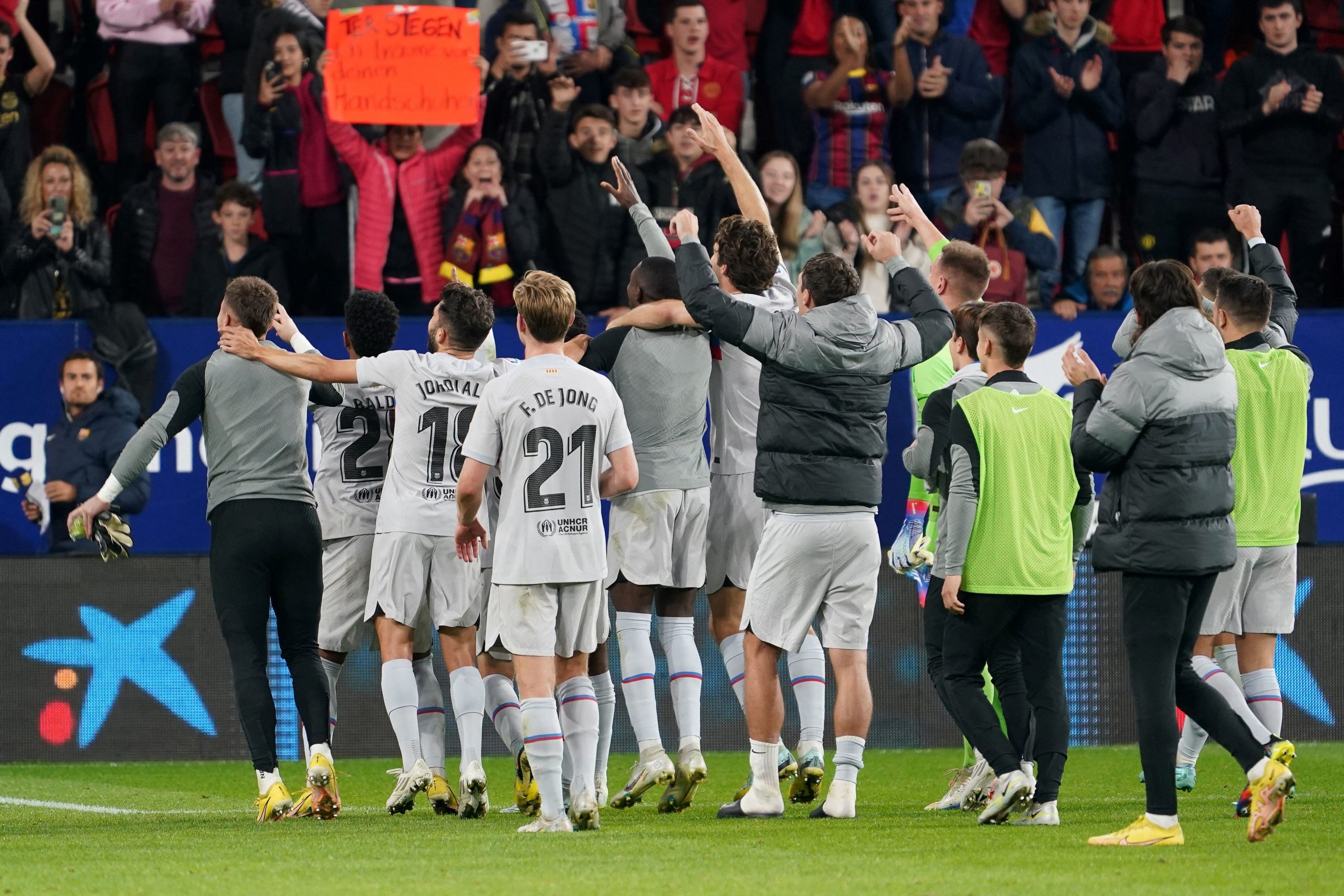 The world of football often brings with it exhilarating scripts that feature nail-biting finishes. However, the hard-fought games where a team has to squeeze out every ounce of its energy are equally as rewarding.

Barcelona’s clash against Osasuna last night was a combination of both. It was well-known that the fifth-placed team in the league would pose serious threats to Xavi’s men and their status of being table-toppers. What unfolded was nothing short of jaw-dropping.

Barcelona were put to their toughest challenge yet, having to play a man down for most of the game. Ultimately, they brought home all three points courtesy of goals from Raphinha and Pedri.

This was the Catalans’ final clash before the FIFA World Cup break, and the team could not have hoped for a better finish to the first phase of the hectic season.

Barça Universal brings you three talking points from the mind-boggling clash in Pamplona.

1. A catastrophic first half

Going just by the first-half performance, it is quite difficult to believe that Barcelona picked up three points at El Sadar. Nothing went as per plan as the hosts outclassed their opponents in every possible department.

Osasuna were strong in possession and created lovely sequences of play with relative ease while the visitors struggled to even string four passes together. The Pamplona-based side worked ferociously off the ball to win back possession every time they lost the ball and it broke the Catalans’ rhythm.

Osasuna’s early goal in the sixth minute did not help Barcelona’s cause and put them under instant pressure. However, things just got from bad to worse.

Robert Lewandowski quite unnecessarily had himself sent off in the 30th minute in what came as a massive blow to the visitors. Already on a yellow card, the striker’s decision to throw himself on David Garcia seemed foolish to say the least.

If Barcelona’s struggles up until the half-hour mark were not enough, being reduced to ten men completely threw them off. Osasuna recorded seven shots in the first period with four shots from inside the box, forcing Marc-Andre ter Stegen into a crucial save.

Having a man sent off is one of the biggest disadvantages a team can have during a game. To play a man down for 60 minutes is a task a huge challenge.

When Barcelona had Lewandowski sent off in the first half, all hopes of retaining the top spot in the league seemingly vanished. After all, they were a goal down at the moment against a team that worked relentlessly.

What transpired in the second half, however, forced one to drop their jaw. Three minutes after the restart, Jordi Alba’s cross into the area fell loose in front of goal and Pedri slammed it into the bottom corner to equalise.

Tight defending helped the Catalans hold onto the 1-1 scoreline until the final moments of the game when  Raphinha gave them the lead. The Brazilian made a perfectly timed run into the Osasuna box to get onto the end of Frenkie de Jong’s pass and headed it over the goalkeeper.

This result speaks volumes about Barcelona’s mental resilience in the league this season, for pulling off such a result is no mean feat.

The big talking point on Monday night was Real Madrid’s shocking loss to Rayo Vallecano which helped the Catalans move to first place in the La Liga standings. Given that Barcelona had just one game before the long international break, all they needed at El Sadar was a win to retain their two-point cushion until 2023.

The win last night not only serves as the perfect platform to kickstart the second half of the team’s season but also a great boost to every single player travelling to Qatar to represent their national teams.

Barcelona will only return to action on the last day of December 2022, when they take on RCD Espanyol in the Catalan derby. And they will do so as leaders of La Liga, with possibly even a five-point lead if Real Madrid end up losing to Cadiz later this week.