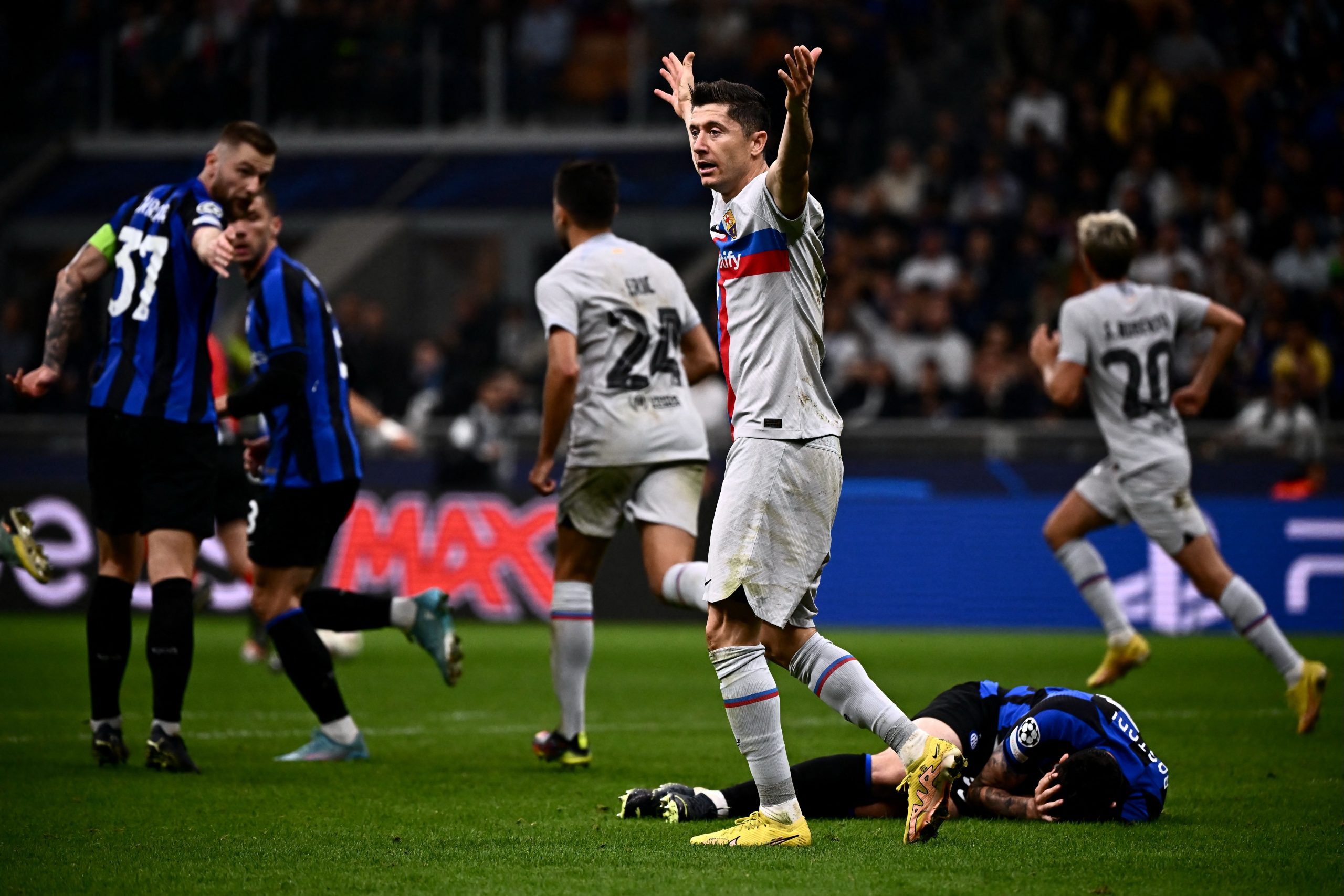 Barcelona were far from their best at San Siro on Tuesday night as they fell to a 1-0 loss to Inter Milan. While the Catalans had a poor outing, several other factors played a crucial role in their second consecutive Champions League loss.

Hakan Calhanoglu gave Inter the lead late in the first half before controversy stood tall in the second period. Barcelona had a goal disallowed and two penalties not given unfairly and could not salvage an equaliser.

In the end, the Blaugrana had to settle for zero points despite dominating the possession, xG, attempts on goal and other attacking statistics. Unlike the defeat to Bayern Munich, the team cannot walk away from yesterday’s result with any positives and will try to forget it at the earliest.

Barça Universal brings you three talking points from the shocker at Milan.

The world was stunned when Jose Mourinho’s Inter Milan beat Barcelona in 2010. What was more astonishing was how the Italian outfit completely nullified the Golden Generation’s rampant attack and parked the bus.

The recent clash between the two teams on Tuesday may not be remembered as well as the game in 2010, but the number of similarities between the two fixtures is astonishing.

At the Giuseppe Meazza, Inter Milan turned back the clock. The Italian defence did not leave an inch of space on the field, continuously cutting off Barcelona’s buildup and thus, breaking their rhythm. The Catalans never really got into the game, and their discomfort was quite conspicuous.

Much like how Mourinho man-marked and eliminated Lionel Messi in 2010, Simone Inzaghi’s side made Robert Lewandowski disappear on the field.

Ousmane Dembele’s crosses flew into the Italian defender’s body like magnets, while Raphinha always found himself jailed in between three players.

That Barcelona played poorly on the night is a fact that cannot be denied, and Xavi should be worried as to why his men were so clueless against Inter. Yet, credit must be given where it is due that the Serie A side put up a defensive masterclass.

Against Barcelona, the hosts recorded a whopping 22 tackles, 13 interceptions and 35 clearances in 90 minutes. That number boils down to a defensive action every 1.2 minutes.

The biggest talking point from the round three Champions League fixture in Milan had to be the scandalous refereeing. Xavi was openly critical of the match officials after the game, and for good reason.

To begin with, Barcelona’s equaliser in the second half was legal according to the FIFA rulebook. While the ball did mildly touch Ansu Fati’s hand in the buildup, the official rules clearly mention that such a goal should stand.

Things went from bad to worse during the episode of Denzel Dumfries’ handball. The ball clipped the Dutch international’s fingers in a very similar fashion that it did Fati’s. The VAR conducted a three-minute enquiry into the incident and the video replays clearly showed the ball strike the defender’s palm.

Yet, the referee was not even summoned to the pitch side monitor to use his judgement. The Video Assistant Referee directly overruled the claim and asked for play to be continued. For how long can such double standards persist?

The list of blatant refereeing errors goes on and on. Barcelona were denied another penalty when Robert Lewandowski was taken down in the box while Hakan Calhanoglu was not sent off for a frightening tackle on Sergio Busquets’ ankle.

3. A mountain to climb in the UCL

The last two UCL games have resulted in zero points for Barcelona, placing them in third place after Bayern Munich and Inter Milan. The Catalans cannot afford to move down to the UEFA Europa League for the second season in a row, but the path to qualification is far from easy.

The next three clashes for Xavi’s side become must-win encounters. Luckily enough, the Blaugrana play both Bayern Munich and Inter Milan at home and wins on both nights can help them reach the knockout. Yet, it is easier said than done.

The steep climb will begin next week when Barcelona face off against Inzaghi’s side once again, this time at Spotify Camp Nou. A win next week can see them jump past the Nerazzurri to second place but a loss would virtually end their hopes of a berth in the Round of 16.