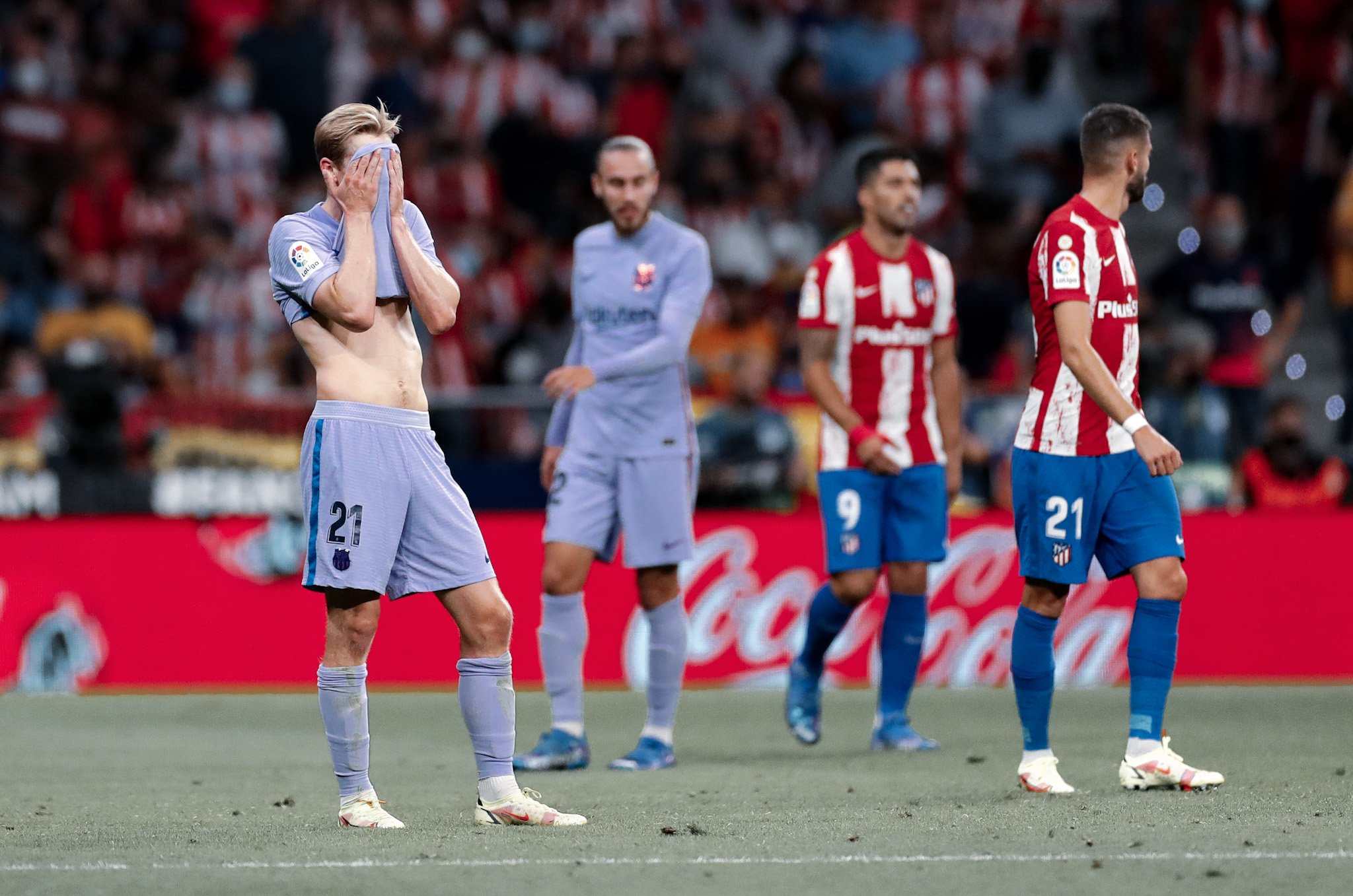 On the back of a 3-0 trouncing at the hands of Benfica in the UEFA Champions League, the onus was on Barcelona to make amends of what was quite a horrendous performance last night against Atletico Madrid. What ensued was anything but satisfactory.

The Catalans endured quite a horrendous ninety minutes under the Madrid sky. Quite clearly the inferior side, Barça could do next to nothing to remedy their situation, helpless as they lost 2-0 to Atleti.

1. Koeman shoots himself in the foot, again

The team selection against Benfica was anything but optimal. As such, given the volume of the defeat, Barcelona and Ronald Koeman had a chance to show their worth with a better selection, but as is becoming a habit, they failed yet again.

At the very least, a starting lineup should show some form of a game plan. Atletico quite recognizably set themselves up to limit the spaces out wide and force play central where they had a low block to stop it. They also clearly had the team set up to attack on the counter.

While Los Rojiblancos were easily identifiable from the get-go, the Blaugrana were as faceless as ever.

The team, completely bereft of wide players, was set up in a 4-2-3-1 instead of the more reasonable option in a 4-3-1-2. The double-pivot and the sheer volume of players out of position did nothing to justify the selection.

A manager’s primal objective is to maximize on the strengths of their players while also mitigating their weaknesses. The way Barcelona set themselves up, it is as though the plan was to do the exact opposite.

Frenkie De Jong in the wing for example, did nothing to take advantage of his ball playing abilities, or decisiveness in between the lines. Overall, the lack of a clear tactical blueprint to follow has been, and continues to be, an issue that plagues Koeman and his forces.

The team had no recognizable passing lanes, no pressing mechanism, and the overall positioning of the players, which itself was all over the place, only played into their rivals’ will.

This season, Atleti have struggled in matches more often than not, needing scrappy wins late on in games to get the three points. Despite this, Barcelona made them look far better than they have been at any point this season. It begs the question: Why is it that Joan Laporta, an admirer of positional play, would place his trust in a manager who has no intentions of playing it?

2. Araujo is brilliant but imperfect

The events of the 2021/22 season have, and continue to be a thorn in the eye of supporters worldwide, but out of the ashes, few individuals rose to the occasion better than Ronald Araujo.

The Uruguayan has so far had a phenomenal campaign with Barcelona, showing his defensive prowess against all sorts of opposition. As he is indeed a mortal, mistakes are to be expected from him, and unfortunately this was one of those days.

Often famed for his undying dedication to the team, his desire to win the ball back upfield opened up the team to a host of problems. His positioning was more than taken advantage of by Joao Felix in the right flank, as he wasted no time in harassing the Barça defence once he quite nimbly rid himself of his marker.

The same positional mistakes were at the heart of the second goal, where he was virtually nowhere to be seen. His adventurous attitude, especially when it was anything but needed, left Gerard Pique helpless against Luis Suarez on the counter.

One naturally expects him to make a return to his best, because he is one of the best in the current squad. Regardless, his performance highlighted the fact that even the best have their off days. Unfortunately for him, his off day was consequently at the heart of both conceded goals.

Against a Barcelona side as disjointed as this, the odds were always against Barcelona’s favour when it came to stopping Luis Suarez from having a field day. The Barça legend ended the night with a part to play in both his side’s goals. He brilliantly set up the first and slotted home the second past a lifeless Marc Andre Ter Stegen.

It was not just that he scored, but how he performed. Knowing Barcelona inside and out, there was nobody better to capitalize on the team’s weaknesses than him. While the likes of Gerard Pique and countryman Ronald Araujo would step out of position, he slotted neatly into the pockets of space carelessly left behind. Even at his age his instincts and effectiveness as a striker remain.

Once his goal eventually did come, he showed some respect to his former teammates and fans by not celebrating wildly. On his way out, however, he left with a message.

He made a telephone sign with his hand, perhaps mockingly signaling to Ronald Koeman, who told him to leave Barça via a telephone call at the start of the 2020/21 season. This is a decision Suarez on numerous occasions said hurt him profoundly, and it is fair to say he exacted his revenge.

Even in the red and white of Atletico, he continues to show just how instrumental he is to his team’s success. A quite decisive night for El Pistolero.