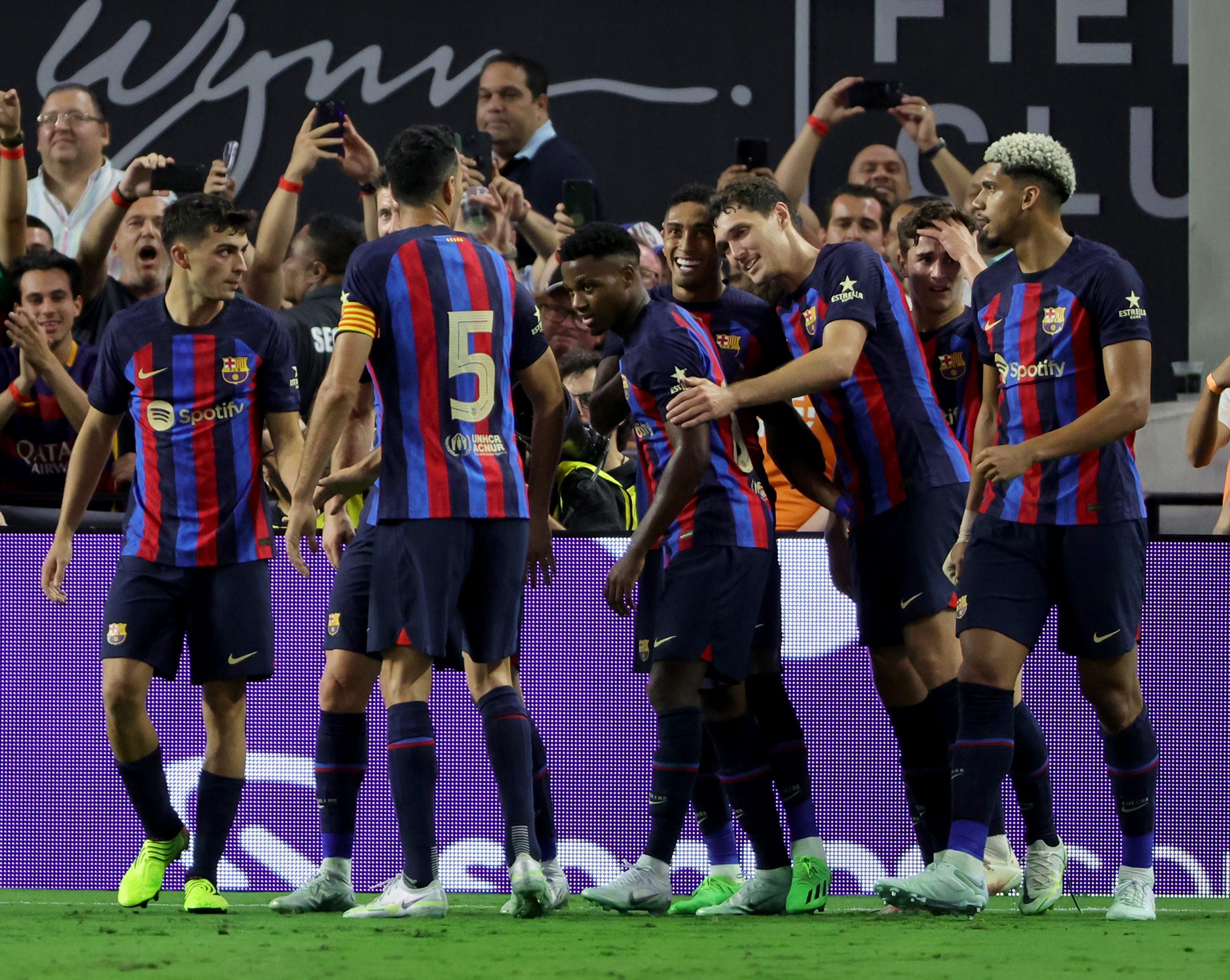 The third game of the USA leg of preseason is set in the Cotton Bowl stadium in Dallas. After memorable wins against both Inter Miami and Real Madrid, Barcelona will look to serve a similar fate to Juventus on Tuesday.

The Blaugranas looked the better team in El Clasico for the majority of the game and displayed why they could challenge on multiple fronts this season. More importantly, Xavi got a first direct look at the squad depth he has at his disposal.

Meanwhile, Juventus have only played one preseason game so far. They put away the Mexican side Guadalajara relatively easily but it is fair to say that the Bianconeri are yet to be tested.

Xavi’s men will look to continue their run of good form against the Italian side. Rotations will be in plenty, and it will be a test of finding chemistry over and over anything else. Here are three talking points ahead of Barcelona vs Juventus.

Last season, Dani Alves started most games for Barcelona at right-back despite being at the age of 38. It was Sergino Dest who played deputy for the Brazilian full-back, but the USMNT star struggled to find form with consistency.

The club decided against renewing Alves’ contract for this season, which leaves Dest as the only natural right-back in the team. Yet, the manager chose to deploy Ronald Araujo in that position for El Clasico earlier this week.

Xavi’s decision may have been inspired by the Uruguayan’s impressive display against Real Madrid last season but is also an indication that he does not trust Dest enough. That said, it remains to be seen who starts against Juventus.

The signing of Andreas Christensen and the potential arrival of Jules Kounde mean that Araujo is not tied down to start at centre-back. Further, Kounde is capable of playing at right-back too which further mounts the pressure on the American defender.

If Dest starts against Juventus, he will have to make a statement with his performance. While he showed brilliance in flashes last season, he must show that he can do it consistently.

The depth in Barcelona’s squad this season is scary, especially in the forward line. However, with great power comes great responsibility and Xavi is in a similar spot.

It is now up to the manager to keep all the players satisfied with their roles. Given that all six (and more) options in the forward line are potential starters, the rotation will not only be important in pre-season but also once the actual season begins.

Ferran Torres will be unavailable for the game on Tuesday, but Xavi could opt to start Ousmane Dembele on the left wing on the night. Needless to say, Raphinha deserves continuity after two promising starts on the right.

With two pacey and skilled wingers alongside him, Robert Lewandowski will look to get his account off the mark against Juventus. With perfect deliveries from both flanks, it seems almost inevitable.

Yet, the second half will probably see all three players subbed off. Pierre-Emerick Aubameyang and Ansu Fati will come on for Dembele and Lewandowski while Memphis Depay could replace the third spot in attack.

A similar story lies in midfield where six players compete for three spots. It will be up to the manager to ensure Pedri, Kessie, Gavi, Nico, Busquets and Frenkie de Jong get adequate playing time.

3. A start for Nico in defensive midfield?

For a long time now, the focus at Barcelona has been to find the next Sergio Busquets. It is not surprising, for the captain is in the final year of his contract and could well leave the club next summer.

Frenkie de Jong was initially thought to be the man for the job. However, it became increasingly clear last season that the Dutchman cannot play as a single pivot.

While Franck Kessie too is a valuable option as a DMF, the former AC Milan player provides more going forward. Xavi has preferred using him as an interior so far and that trend could continue.

As it stands, Nico is best placed to take Busquets’ spot. The manager has been trying to use the youngster as a pivot in recent games and the results are encouraging.

Nico has looked comfortable in the deep-lying role. His vision allows him to make the occasional defence-splitting pass, and his tenacious work rate contributes to defence.

He is certainly not Busquets, but probably the closes Barcelona can get to a replacement as of now. With his role for the season almost decided as the captain’s deputy, he could start against Juventus in that position.