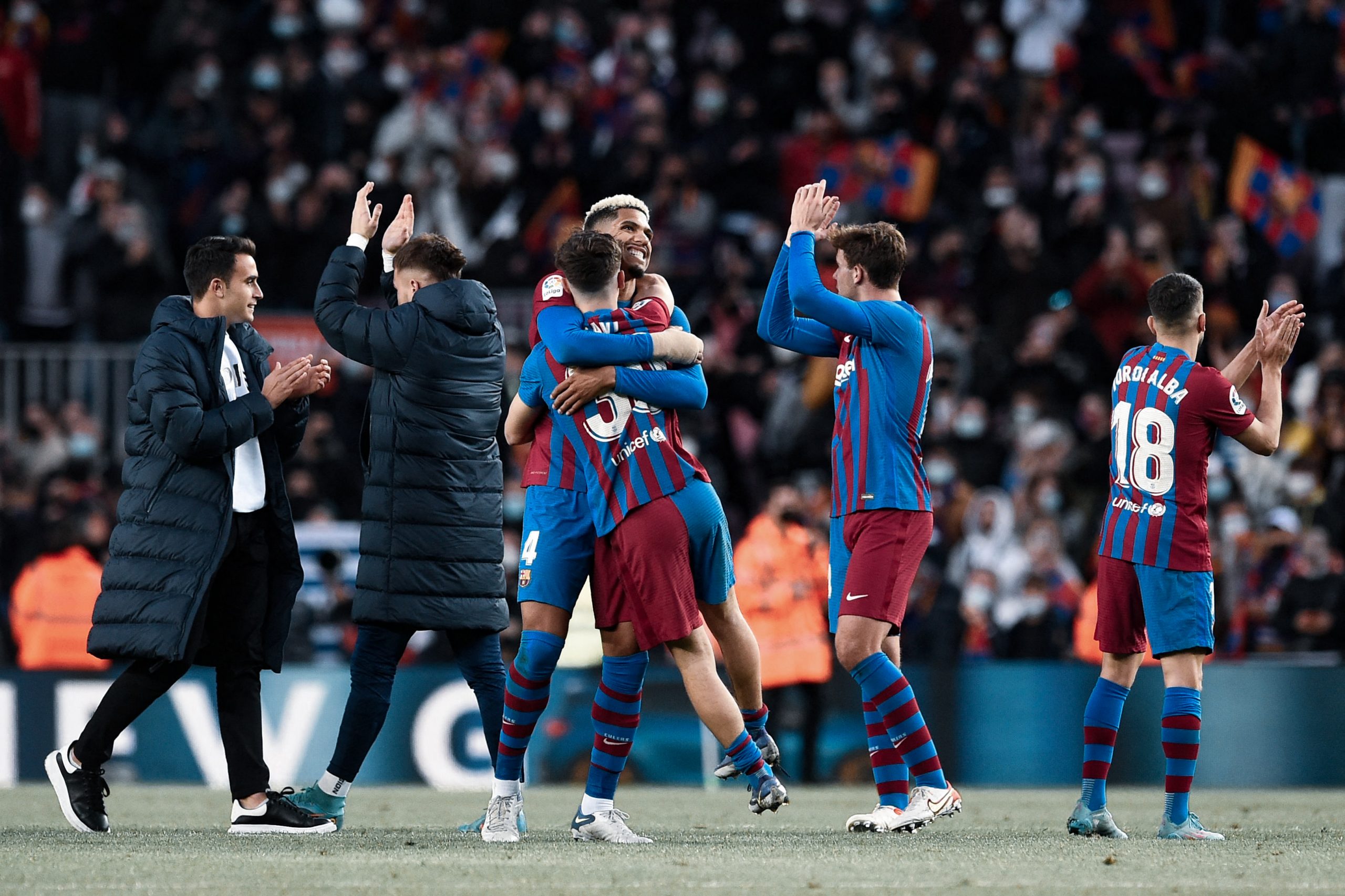 For seventy minutes on Sunday, Barcelona produced some of the most magical football the Camp Nou has witnessed over the past few years. In a dominating performance, Xavi’s men took down fourth-placed Atletico Madrid and leapfrogged them to enter the Champions League spots.

Though the scoreline reflects a landslide victory for the Catalan giants, that was far from the case. The final 20 minutes turned into a gruelling fight after Dani Alves’ red card and Luis Suarez’s goal. However, the Catalans held on and weathered the storm to secure all three points.

Though it is harsh to pick specific players on a night when the team played as a cohesive unit, Jordi Alba and Dani Alves showed their class when it was needed the most. Barcelona had not scored against Simeone’s side in over two years but were able to do so four times on Sunday thanks to the duo.

For Barcelona’s equaliser, the two full-backs combined exquisitely. At 1-0 down, Alves assisted Alba for a thunderous goal. However, that was just a glimpse of what was to come.

Needless to mention, it was Alves once again who took the freekick leading to Araujo’s goal. Minutes after the commencement of the second half, the Brazilian slotted a rocket past Jan Oblak to take Barcelona’s lead to four.

Four key passes, two goals, one assist, two interceptions and seven accurate long balls are what the duo managed collectively on the night. Sparing a moment of confusion from the right-back that led to his sending off, it would not be wrong to say that the duo were the decisive factors on the night.

2. Man of the match second debut for Adama

Over the past few months, Ousmane Dembele has been Xavi’s most potent weapon on the wings. The Frenchman not only provided the team with his electric pace but also decided games through his ability to take on defenders.

Adama Traore did all of that and more on his second debut for the club. When called upon by the manager, the winger repaid the trust in full.

On the right-wing, the former Wolves star turned into a significant asset for the team. His ability to take on defenders, coupled with his unreal physical strength, reduced the Atletico Madrid defence to look like rookies.

With his slick dribbles and positional awareness, he was able to link up with Dani Alves and Pedri to form a deadly triangle on the right flank.

The single most important attribute that Traore provided over Dembele was his cool-headed passing. Despite being heavily criticised for his poor passing accuracy in the Premier League, the Spaniard put all doubts over his integration at Barcelona to bed on the night.

Two successful dribbles out of five attempts, a key pass, an assist, and five duels won highlight the 26-year-old’s man of the match performance. His cross to Gavi for Barcelona’s second goal could not have been placed any better. If Sunday’s game is anything to go by, Dembele could have well seen his last game in the garnet and blue.

There is a long way to go before Barcelona can once again dominate the global charts. However, the game against Los Rojiblancos was yet another assurance that the team are headed in the right direction.

Xavi may not have had the cleanest start to his managerial career at Barcelona. Yet, one cannot deny the visible changes the squad has undergone under his stewardship.

On Sunday, the Blaugranas grabbed Simeone’s side by the neck and suffocated them. Throughout the first half, Atletico Madrid could hardly conjure any chances as Barcelona boasted 60% of the possession. The team’s high press helped recover the ball with ease within seconds of losing it.

Xavi has breathed life into a team that seemed dead not too long ago. The question will be around the sustenance of form, for the club have often fallen off after a strong performance in recent times. With a big clash against Napoli coming up in the Europa League, it remains to be seen if they can hold their own.