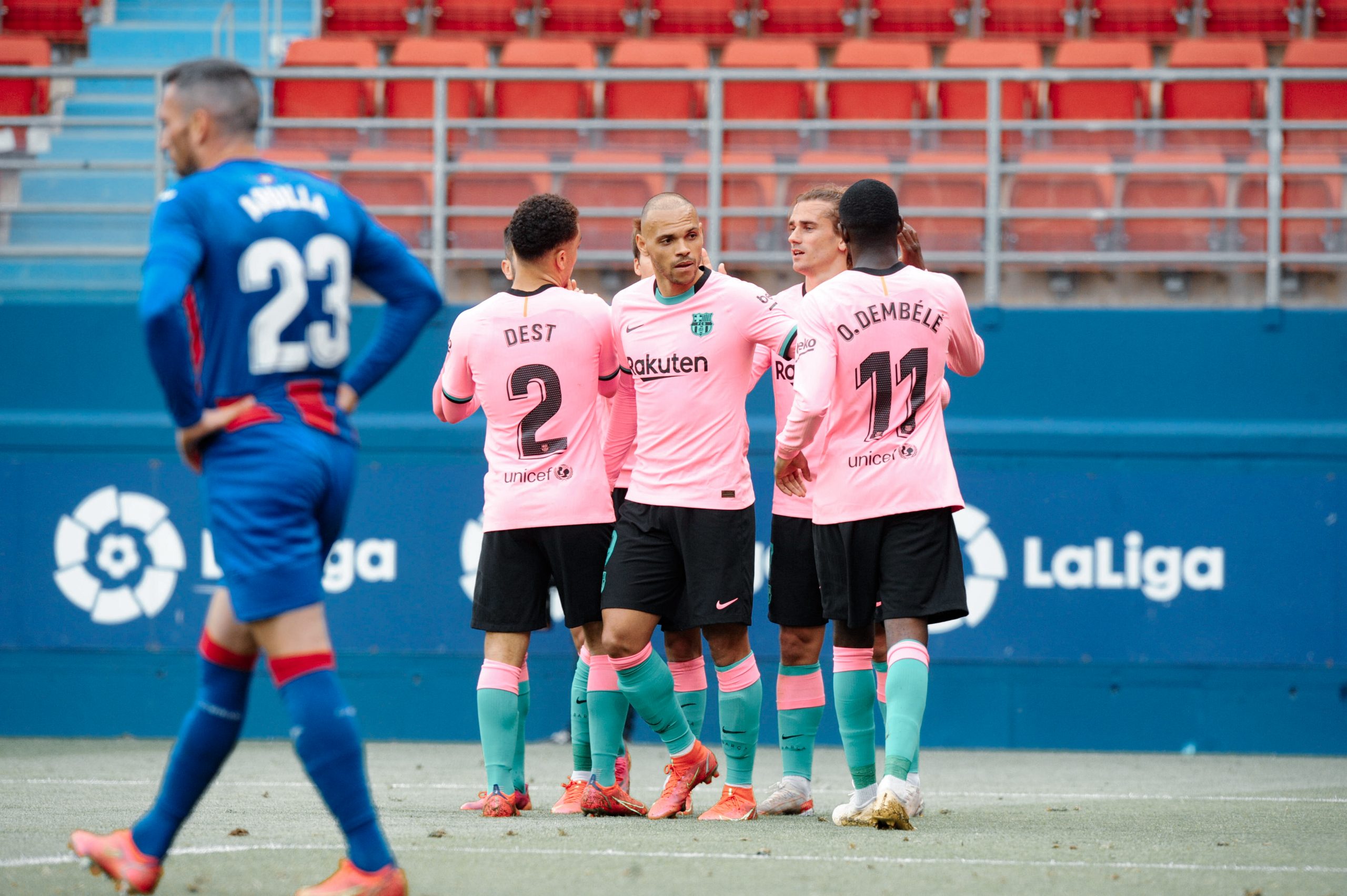 While the world had its eyes fixated upon Atletico Madrid and Real Madrid, Barcelona dragged themselves to a win against Eibar. As the other two games brimmed with quality, the clash at Ipurua was a dull affair. It was a continuation of Barcelona’s end-of-the-season slump with a few positives.

With Lionel Messi and Pedri granted early vacations, Ronald Koeman made wholesale changes. There was nothing but pride to play for and possibly a chance for a few players to cherish their last game in a Blaugrana shirt. Neto, Junior Firpo, Martin Braithwaite were a few in the latter category.

Barcelona barely threatened the relegated Eibar for most of the game. In the end, it was only an Antoine Griezmann stunner that separated the two sides. While the goalscorer’s future is in jeopardy, the future of Koeman at Barcelona looks even bleaker by the minute. Here are the takeaways from Barcelona’s dull display at Ipurua.

1. Barcelona look more toothless than ever

Playing against last-placed Eibar is a challenge one would expect Barcelona to cruise through. The statistics, however, are beyond embarrassing. Despite boasting of close to 70% possession, the Catalans had nothing to show. Santiago Latre’s side managed to get 17 shots away, while Barcelona could only get seven. Moreover, the first half display lacked read eleven to one in the same respect. The fact that Koeman’s men had an xG of 0.01 in the first half speaks volumes on the poor display.

One ponders where this side would be without Lionel Messi. In the Argentine’s absence, the visitors lacked creativity. Not only did they miss their captain’s clinical finishing, but also his spark in the buildup. On the night, Fransisco Trincao looked lost. Ousmane Dembele, for all his successful dribbles, couldn’t come up with any threat. Junior Firpo’s poor showing did not help the Catalans either. They could not work their way past a defence that has conceded 52 times this season. The only word to describe the side: Toothless.

The last thing one would expect Barcelona to require against Eibar would be a defensive masterclass. On another day, the hosts could have easily walked away with all three points. Bryan Gil’s neat footwork and the tenacity of Kike Garcia and Sergi Enrich kept the Barcelona defence on their toes.

Ronald Araujo put up a spotless performance, one he would be proud of. The Uruguayan racked up two clearances, two interceptions, two clearances and blocked three shots on the night. He also won five out of seven aerial duels and four ground duels. Araujo seemed to be everywhere, denying Eibar constantly.

Ronald Araujo for Barcelona vs Eibar:

He was assisted on the side by a clinical Oscar Mingueza. The young Spaniard was more silent but certainly not less influential to his partner. It was Mingueza’s brave block in the first half that denied the hosts their opener. As always, his distribution was almost flawless, sparing a lapse in confidence in the first half.

Nevertheless, four clearances, one blocked shot, and a tackle is a positive for Barcelona to take home. While the attack failed to conquer, the defence held the fort strong. Regardless of Laporta’s ideas of a mass exodus, the two La Masia centre-backs have been a ray of sunshine in this dark season. Their place in the first team of next season is guaranteed, and they justified it on Saturday.

Should he stay, should he leave — the debate continues to bother even the board. However, keeping his future aside, Griezmann was the difference between the two sides on Saturday. Quite literally.

Ousmane Dembele’s relentless run started the attack, and a mix up in the Eibar defence saw the ball head to the French striker at the far post. The finish was one of pure class, a strikers dream.

Time stood still for an instant. One knew it was going to be a special moment, and Griezmann did not disappoint. His acrobatic volley found the top corner of the goal in picture-perfect style.

Antoine Greizmann was never a player of the profile needed by the Blaugranas, however, one must admit how he has turned things around. For all the criticism he has come under, he finished the season with 13 goals and 7 assists in the league alone. What the future holds for him is uncertain. But if this was indeed his last game for Barcelona, it would be some style to cap off his chapter in Catalonia with a screamer like that.