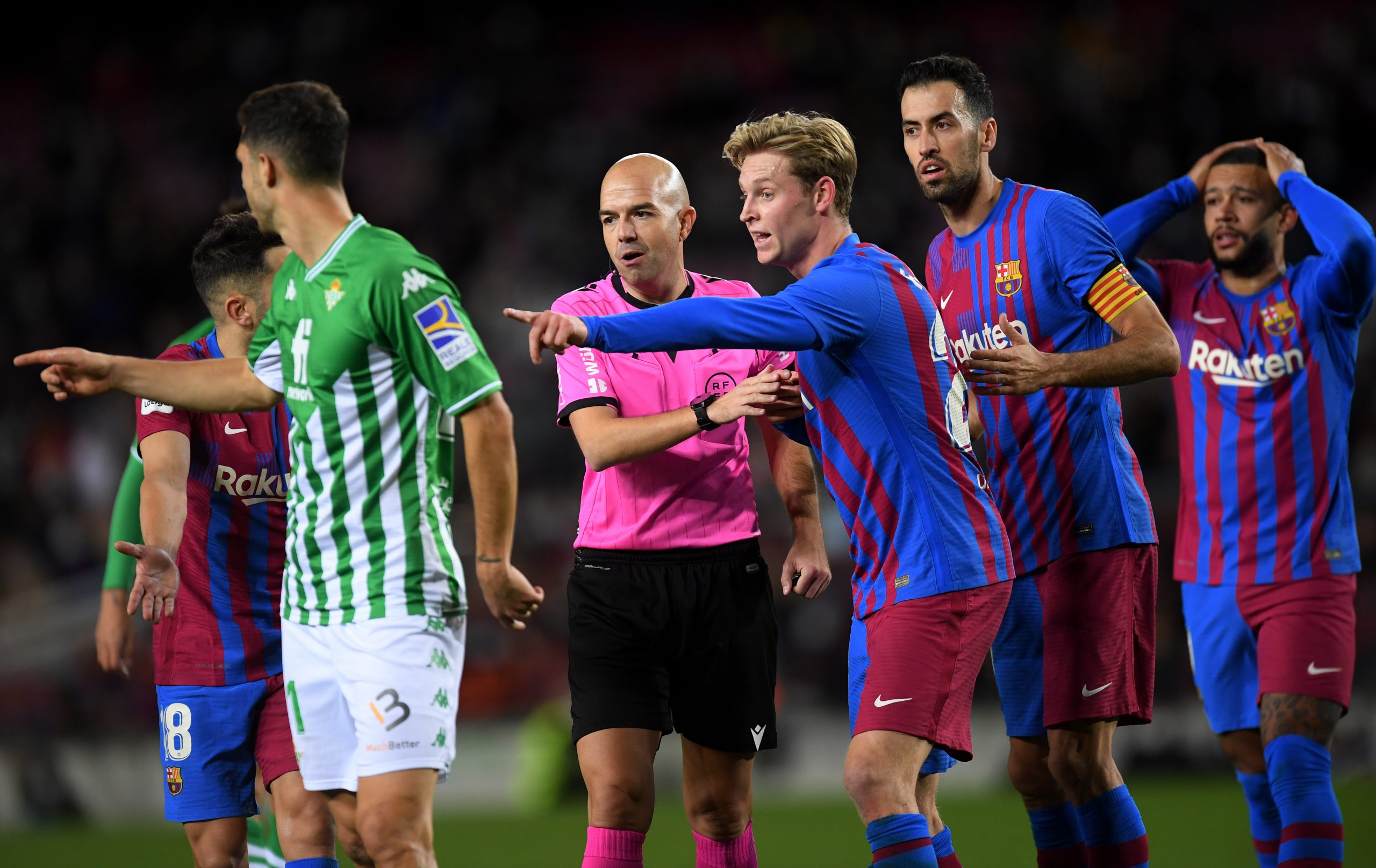 The warning bells that sounded during Barcelona’s match against Villareal hinted at something bad brewing. The Catalans won the game because of two late goals aided by a factor of luck. However, the first defeat under Xavi came soon enough, when the club faced Real Betis one week later.

The game came with surprising changes across departments. The manager decided to rest Gerard Pique and Frenkie de Jong on the night, with Clement Lenglet and Phillipe Coutinho replacing the duo.

Despite having moments of brilliance, Barcelona were once again largely outplayed and outpassed by a dynamic Betis side. The defeat at home meant that Xavi’s men further slip down the ladder. Here are three takeaways from Barcelona’s loss to Real Betis.

1. First defeat of a new era

Xavi’s tenure at Barcelona began with two draws and a win in three encounters. The new project, one for the long term, was seen as ideal for the student of Guardiola to lead.

The first two games brought in a sense of freshness. The circulation of the ball improved with drastic growth in the role of midfielders in the team. However, the cracks beneath the surface were visible, though they were well masked by a combination of effort and luck in the opening games.

The game against Real Betis showed exactly why Xavi has a monstrous task ahead of him. Despite visible progress while in possession, the side remains clueless in the final third. The only points of entry into the opposition box in the first half were Jordi Alba and Abde, with the former being too predictable and the latter, inexperienced.

In terms of pressing, the storyline seemed to be a repeat of the game at La Ceramica. After a relatively promising opening spell, the Catalans were out pressed and struggled to win the ball back.

On Saturday, Barcelona were the side with more chances. The hosts missed two big chances and forced three saves from Rui Silva. However, the visitors walked away with all three points after capitalising on their sole big chance. Football can be a cruel game, but this match was beyond the traditional concept of luck.

2. Active substitutions change the game, but not enough

Gavi’s concussion injury in the first period led to Riqui Puig’s introduction as early as the 30th minute. However, the midfielder could not live up to the role that Gavi played in the initial system.

The second half brought a dual change. Ousmane Dembele and Frenkie de Jong were introduced to bring a spark to the team’s dynamics, and they did not disappoint.

With the addition of the Dutchman to the midfield, the play seemed to progress a lot more vertical. The ball found its way more into the Betis area, and Barcelona finally started creating chances again.

Moreover, the introduction of Dembele on the wings was a dynamic-changing decision. The Frenchman brought in not just pace but also proactivity to Barcelona’s display. With him menacing the defences with his runs, Xavi’s side created openings with ease. However, the lack of a finisher came back to bite the hosts once again.

3. Walking disarmed into a lion’s cage

Barcelona’s next game is against Bayern Munich, and the team would have hoped for better momentum heading into a crucial game. Barcelona will need to win against the rampant Germans to keep Champions League qualification in their hands.

Yet, there is optimism to some degree. The team will have to focus on areas like pressing and finishing, but Saturday’s game provided an idea of what works and what doesn’t.

Gavi’s likely availability could come as a big boost for Xavi, while Frenkie de Jong and Nico once again proved their calibre in the second half against Betis. Ronald Araujo and a rested Gerard Pique could lead the defence.

Memphis Depay had a poor outing ahead of the clash at Allianz Arena. In a dysfunctional forward line, the striker could provide no respite. Depay did not register a single shot during the ninety minutes.

Philipe Coutinho started brightly, but once again faded soon later. Indeed, the forward line is a big concern heading into a must-win game. However, it remains to be seen if Xavi can formulate a masterstroke or whether the confident bookies will be proven right.