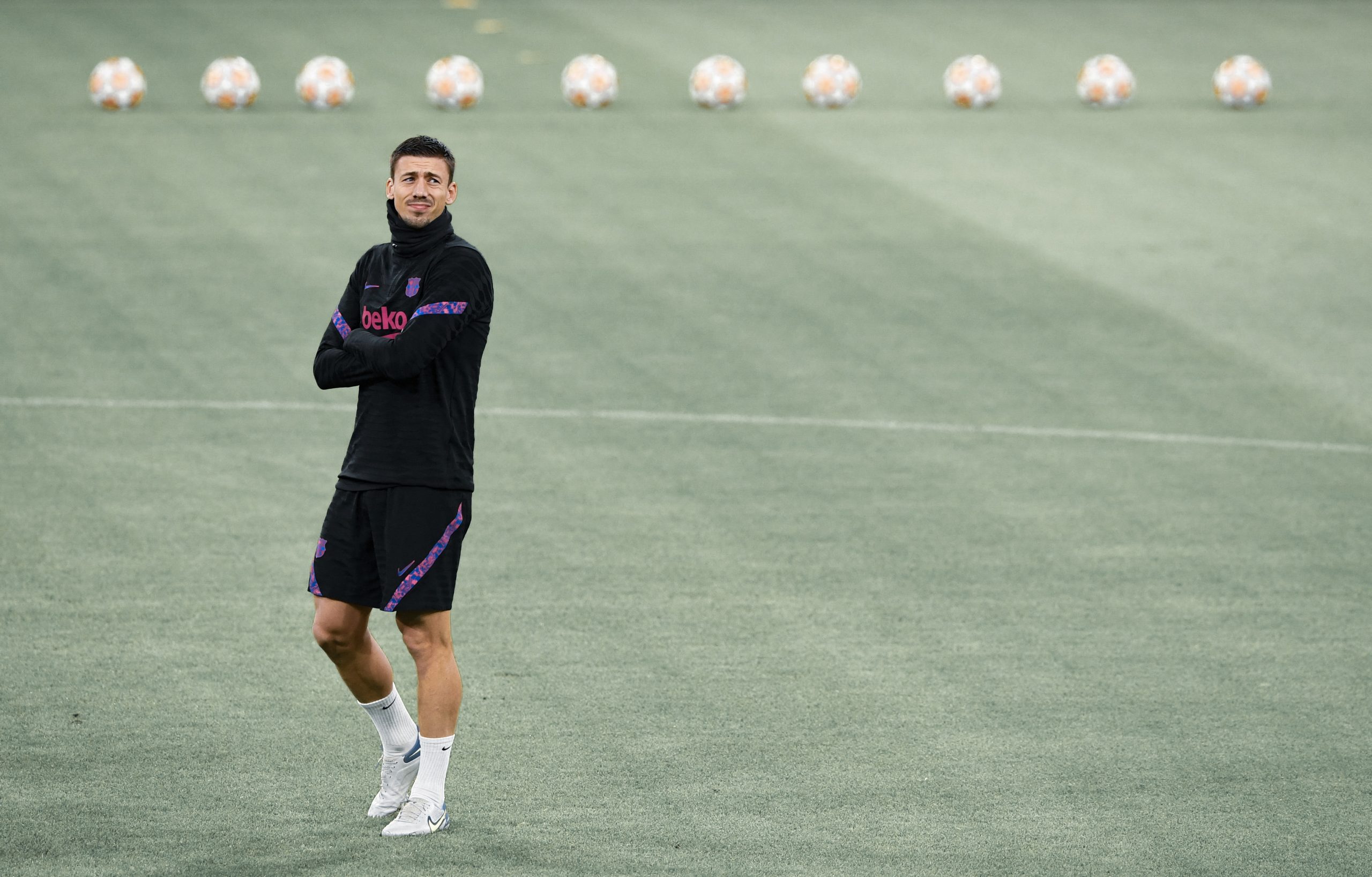 The 2021/22 season is gradually descending into a season to forget for a certain Clement Lenglet. The Frenchman has gradually fallen into obsolescence for Xavi Hernandez’s side. Despite his age and experience, the Barça number 15’s lacklustre 2020/21 campaign has come to punish him in the current day.

So far down has he fallen in the pecking order that he is behind newly signed Eric Garcia, and Oscar Mingueza, both of whom he was estimated to play over this season.

Given his passing ability and comfort on the ball, some would argue that he would be playing interchangeably with Ronald Araujo this season, especially under a manager like Xavi Hernandez who values on the ball attributes.

While Barcelona seem to have no use for Lenglet anymore and have other plans in the market, there are other clubs that can make better use of him than Barcelona. In this article, join Barça Universal as we explore three possible destinations for the Frenchman.

Borussia Dortmund are set to have a number of departures this summer. The German outfit will be losing several players for various reasons. The nature of the exits will make it such that Clement Lenglet will be an easy fit for the Black and Yellow.

One of the exits will be that of Manuel Akanji. According to several reports, Dortmund are ready to let the Swiss defender go this summer. This is due to the fact that the former Bundesliga champions are soon going to sign Niklas Sule, who they feel is an upgrade.

Die Borussen are also set to part ways with Dan-Axel Zagadou. The Frenchman can perform very well when given the chance, however, the problem comes in the fact that he is not available frequently enough because of injuries. As such Dortmund might end up releasing him this summer.

If Clement Lenglet stands out for anything, it’s his offensive nature on the ball. The Frenchman is extremely proficient in his ball-carrying abilities, as well as his passing.

Whether it is in a back four or three, the former Sevilla man is always one to prefer a lacerating ball into the two final thirds of the pitch.

Dortmund are soon going to make final the acquisitions of Niklas Sule and Nico Schlotterbeck. The current Bayern man is likely to be the main starter between the two. As for his German counterpart, he can compete with Lenglet for the second spot in the defence.

Their strengths match up in terms of their passing, as both are excellent distributors of the ball. In areas where the Frenchman is lacking, the statistical deficiencies could nimbly be explained by Barcelona’s own playing style.

Lenglet is currently unlikely to be one to make a host of tackles, whereas Schlotterbeck is.

The Barça number 15 would be perfect for a Bundesliga team in the sense that his distribution would be extremely useful in the case of counterattacks, something German teams are known extensively for.

Furthermore, Lenglet is more than ready to get his hands dirty for the sake of the team with a tackle when necessary.

Dortmund might lose three centre-backs this summer, and a profile such as that of Lenglet could be useful in ensuring that they have as much defensive cover as they need for the next campaign. He can offer competition to Schlotterbeck while partnering with Sule in defence.

If Clement Lenglet is familiar with any club, it is Sevilla. It was there that he gained prominence before making the switch to FC Barcelona.

The Frenchman has been rumoured previously with a return to the Ramon Sanchez Pizjuan, but now more than ever the prospect of his return is going to be beneficial for the Andalusians.

A summer of departures awaits the record Europa League winners, one which will force them into seeking defensive recruitments.

Sevilla are bound to lose Jules Kounde and Diego Carlos in the coming windows. The Andalusians have, through Julen Lopetegui, turned them into the most efficient centre-back pairing in Europe, conceding some of the fewest goals in Europe’s top five leagues.

Only Manchester City with 18 goals against have conceded less.

Lenglet has attributes from both players which make him a prospect that Sevilla should take a close look at.

Carlos stands out mostly for his ability to do the dirty work for his team. The Brazilian is never scared to make a last-ditch tackle and is in the 99th percentile when it comes to blocks made in Europe.

Furthermore, his passing has developed exponentially over the course of his years with Lopetegui, making him one of the best at playing out the back in all of La Liga.

As for Kounde, he shines for his ability to move with the ball, in addition to being an incredible asset in defence. The Frenchman is by no means scared to make a tackle, and on the ball, he has privileges that not many have.

These come in the fact that he gets to trek upfield with the ball at his feet, creating attacking opportunities for his side. This is something in his play that has pushed Didier Deschamps into using him even as a full-back at times.

These are both aspects of his play that can be taken advantage of by Lopetegui. Lenglet after all darts upfield when requested to.

This was a facet that was put to great use by Ronald Koeman, especially when Barcelona played a back three. His distribution of the ball through his passing was elite, and so too his dribbling or ball-carrying ability. That is no longer utilized by Xavi though.

He can take advantage of the aforementioned privileges that Kounde has on the ball. With regards to his tackles, the Frenchman does not make as many as Carlos, of course, but this is something which can increase if ever the manager demanded it of him.

Lenglet isn’t going to be expected to replace both players, of course. He can, however, be used as a replacement for one of them, in the short or even long term. Sevilla could make the acquisition of someone who possesses the no-nonsense defending that Carlos possesses to complement his on-the-ball qualities.

Having made the move from the Eredivisie to the Ligue One, Sven Botman was not expected to perform at the same brilliant levels he has demonstrated in the French first division. It was quite a significant step up in his career, and one that was crucial to Lille’s title charge last season.

The Dutchman is a force to reckon with primarily out of possession. Up against a rival, he has no fears whatsoever with regards to winning duels. Botman is a robust defender, with an incredible physique and impeccable timing in his ball-winning.

In addition to this, he is excellent at proactively defending. Botman is proficient at making tackles and interceptions, however, in his defensive tasks, he periodically forces his opponents into making errors in possession.

The best way to prevent goals is to prevent the very shots from which they originate from happening in the first place.

Botman snuffs out attacks from before they can begin, and through pressing, he wins the ball back in such a manner that he can then kick off another wave of attacks for the French side.

Quality such as this is bound to attract other clubs, and he seems to be headed to England, and in particular Newcastle United. The Magpies are planning on purchasing him for a club-record €47 million.

The French champions will need reinforcement, and for the short term, they could seek a different profile in Lenglet.

Lenglet would not be a picture-perfect replacement for Botman, but he would in many ways surpass his ball-playing abilities given his technical profile.

Lille would also benefit from the Frenchman’s somewhat trigger-happy self. As mentioned previously, Lenglet has no queries with making tackles to aid his team either.

This aspect of his play, in addition to his diverse passing range, makes for quite the acquisition if Lille go for it.

Of the three clubs on this list, Lille are most likely to give him consistent game time. Sevilla themselves are on the hunt for Botman, and Lenglet could take advantage of the void in defence to grab a spot in it.