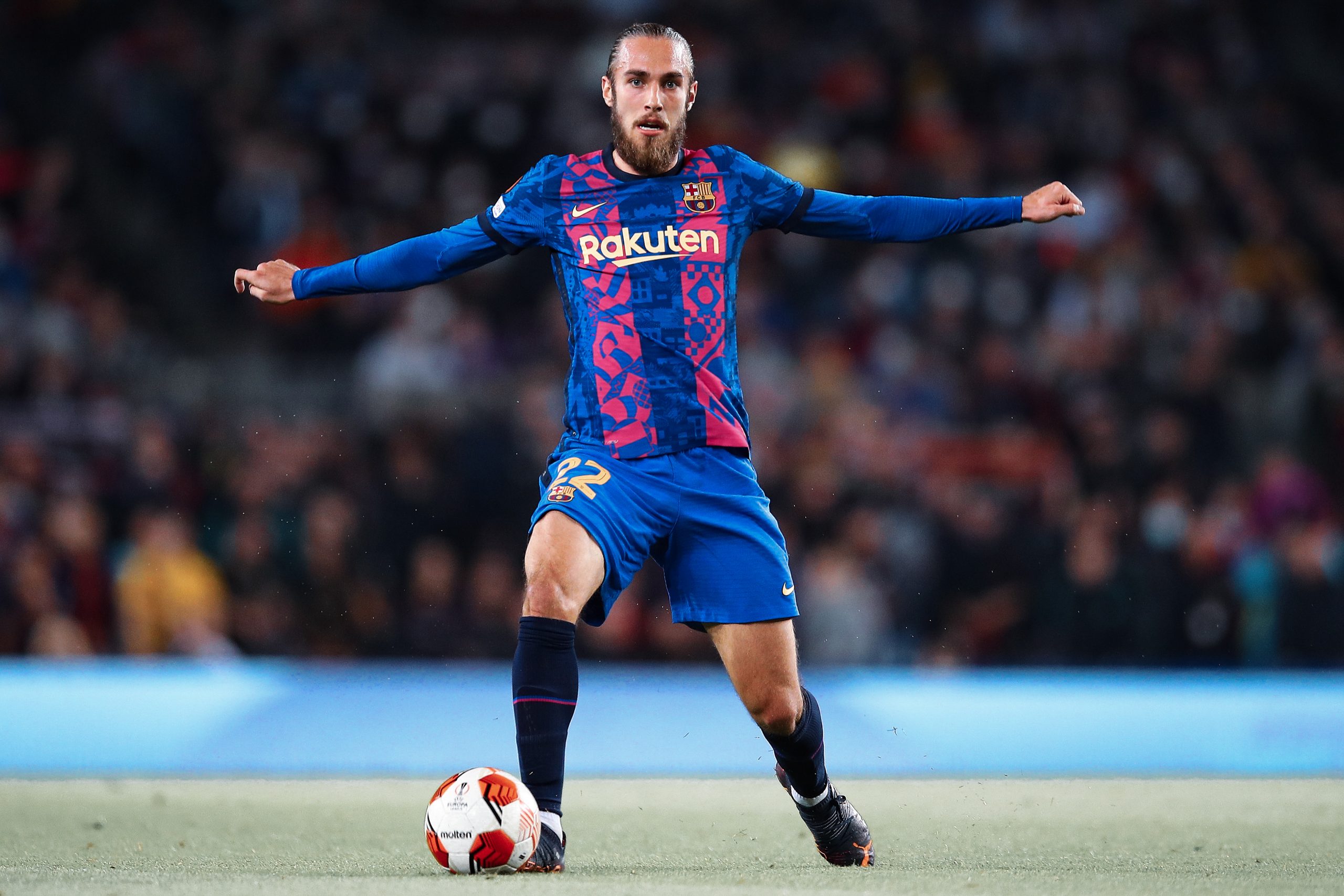 Like a square peg in a round hole, Oscar Mingueza is struggling to find a place in this new-look Barcelona squad. Since the turn of the new year, he has made only four appearances –and finished one complete match.

His ability to play both right-back and centre-back should invite more opportunities, but it’s his lack of mastery in either position that places him low in the pecking order.

The right-back position is becoming increasingly overstuffed at Barcelona; Dani Alves and Sergiño Dest are splitting duties with flying colours.

While it seems unlikely, if Ajax’s Noussair Mazraoui arrives in the summer, Mingueza’s role would be even further diminished – and this isn’t taking Sergi Roberto into account either. At centre-back, Xavi opts for Gerard Pique, Ronald Araujo, Eric Garcia, and even Clement Lenglet before the Spaniard.

Consequently, a summer departure for Mingueza is highly possible. The question is: what are potential destinations? To Mingueza’s delight, plenty of (attractive) teams could use a promising full-back and centre-back hybrid.

Versatility is always needed in football, but ideally, a player has one “preferred” position or something they are most comfortable in. Taking his traits into account, Mingueza is currently a better full-back than centre-back.

His defensive traits help him play right-back, although he falters in the attacking side of the game – other than a surprisingly decent crossing ability.

Nonetheless, his long-term future is probably at the heart of a backline. Mingueza’s defensive acumen, particularly his aggression and tackling, can easily be fine-tuned to help morph him into a full-time centre-back and part-time full-back.

In other words, he fits the centre-back mould more than a full-back. And it was pretty much proven against Eintracht Frankfurt at the Camp Nou.

When considering potential destinations, a multitude of clubs could use Mingueza’s services. Still, La Liga clubs were the main focus of this list due to the probability and likelihood of a move.

Foreign clubs such as Bordeaux and Hertha Berlin showed interest in the Spaniard over the last few months but seeing as they are both in the relegation zone of their respective leagues, they were excluded.

Another honourable mention is Benfica, who could acquire Mingueza in a player exchange for Barça-target Alex Grimaldo. The downside here is that they have an abundance of quality centre-backs and operate with wing-backs.

With that in mind, let’s explore three potential destinations for Oscar Mingueza.

The first destination on this list – and one of the most lucrative – is Valencia. In fact, Valencia reportedly pursued the Spaniard during the January transfer window, but to no avail.

To preface, lucrative here has nothing to do with the money, but rather the fact that Valencia are a “bigger” club that could entice Mingueza. That is, Valencia’s aspirations to play European football are within reach, and Mingueza would play alongside some of Spain’s top talent.

Valencia sit 10th in La Liga – 13 points off a European spot – but are in this season’s Copa del Rey final. In manager Jose Bordalas’ first season, they have morphed into his idealized side, doing whatever is necessary to win, including racking up the most yellow and red cards in the league.

Bordalas prefers a 4-4-2 but has toyed with three-at-the-back formations too. Mingueza could slot in as a classic full-back, a centre-back, or perhaps his best position: a right-centre-back in a back-three.

To Mingueza’s advantage, Valencia’s backline is not entirely set in stone. In other words, there is space to fit the 22-year old in, particularly as a high-end rotation piece.

Starting right-back Dimitri Foulquier is a solid, albeit unflashy option, while current backup Thierry Correira remains a long-term project. The main centre-back rotation consists of Gabriel Paulista, Mouctar Diakhaby, and Hugo Guillamon. Mingueza could seamlessly fit in, although he likely wouldn’t be a starter.

From one perspective, a developing centre-back is not necessarily what Valencia need right now. However, Mingueza’s potential can not be overlooked and he is already capable of fitting into their rotation.

The club is also notoriously financially-drained, thus Mingueza appears as a viable option. Hypothesizing a potential deal, Valencia could offer around €10 million for the defender. Alternatively, he could be included in a potential swap deal for Jose Gayá, who the Catalans are reportedly fawning over.

At Valencia, Mingueza would continue his development into a formidable centre-back capable of playing at full-back. Playing under Bordalas would demand a different type of discipline from the youngster, but that can only help his career.

The likelihood of this deal coming to fruition is fairly high, especially given the club’s interest in January. Bordalas looks for players aggressive players not afraid to get into tackles; what better describes Mingueza than this?

More than the other two teams on this list, Real Betis are far and away the most attractive destination footballing-wise. Should such a move take place, Mingueza could join a team on the rise.

Ambitiously led by Manuel Pelligrini, Betis sit fifth in La Liga, they are in the Copa del Rey final (against Valencia), and they can advance to the Europa League quarter-finals if they overcome a 1-2 deficit against Eintracht Frankfurt.

This success is not unfounded, though, as the club finished sixth in La Liga last season. Valencia trump the Betis option by (arguably) reputation alone, but taking all other factors into account, this is the place to go.

Pellegrini has turned Betis into an all-out attacking side, one that Mingueza could seamlessly adapt to from Barcelona. The Spaniard is a decent outlet when building out from the back, but can still improve on his distribution.

Almost exclusively fielding a 4-2-3-1, Betis’ backline morphs into various shapes and sizes throughout a match, from three “centre-backs” in the buildup to having both full-backs keep the width in the opposition third.

Without the ball, they look to win the ball back high up the pitch. Here, Mingueza’s experience in such a setup with Barca could be vital. Also, due to Mingueza’s versatility, Pellegrini could tinker with his lineups and test out different setups.

Should he play mostly at centre-back, Mingueza would compete with Marc Bartra, Edgar Gonzalez, and German Pezzella. Suffice to say neither are world-beaters, therefore the 22-year-old could earn sufficient playing time.

The main setback, however, revolves around Hector Bellerin. The starting right-back is currently on loan from Arsenal, and his departure from the North London club this summer is reportedly imminent. If Bellerin extends his time at Betis, Mingueza may be surplus to requirements.

Mingueza is also the antithesis of Bellerin, with the better part of his attributes being on the defensive end. This begs the question, would Pellegrini want a different type of full-back? Again, with Mingueza comes versatility and his alternative profile could help the team.

If Betis are looking for a low-cost, high-reward defender, Mingueza is the perfect fit. The club also have a long history of buying ex-Barcelona players, many of who (currently) serve them well.

This laundry list includes Marc Bartra, Martin Montoya, Cristian Tello, and Juan Miranda. One could even add Hector Bellerin, who is technically a La Masia product.

At Betis, Mingueza could play at a club with a philosophy similar to Barcelona’s and help propel them into the higher-end of Spanish football.

The last destination on this list is Rayo Vallecano, another club that presents an attractive option for Mingueza. Vallecano have taken Spain by storm this campaign. They started off the La Liga campaign with fiery intent and made it to the Copa del Rey semi-finals.

Unfortunately, they have lost six of their last eight matches and spiralled down to 13th in the table. Vallecano are full of jovial characters like Radamel Falcao and are led by Andoni Iraola, one of the most exciting managers in the division. Despite their recent lag in form, few clubs are as enticing as this.

Iraola, not unlike Manuel Pellegrini, plays an attacking brand of football, looking to play with pace, width, and verticality. Full-backs play crucial roles in attacking phases while centre-backs are relied on for distribution and outlets for recycling possession.

In such a setup, Mingueza would admittedly need to add more to his offensive game, particularly in regards to making supporting runs, improving his dribbling, and polishing his final ball. Nevertheless, he is comfortable with a possession-oriented side, clearly.

Right-back Ivan Baillu (an ex-Barcelona B player as a matter of fact) has an expiring contract in the summer of 2023, and he is 30-years old. Mingueza could serve as his replacement, not to mention simultaneously play at centre-back too.

Vallecano’s main draw is Iraola, but arguably, that is more than enough.

Should Mingueza depart the club this summer, he would likely have a few options. Each club in this list presents its own set of pros and cons, but most of all, they are each led by a mystifying figure.

At only 22, developing under the right manager will be key in defining Mingueza’s career. Furthermore, that will help bring the best out of his wide array of talents. At the end of the day, hopefully, Mingueza finds the right place to succeed, even if that means staying at home in Barcelona.