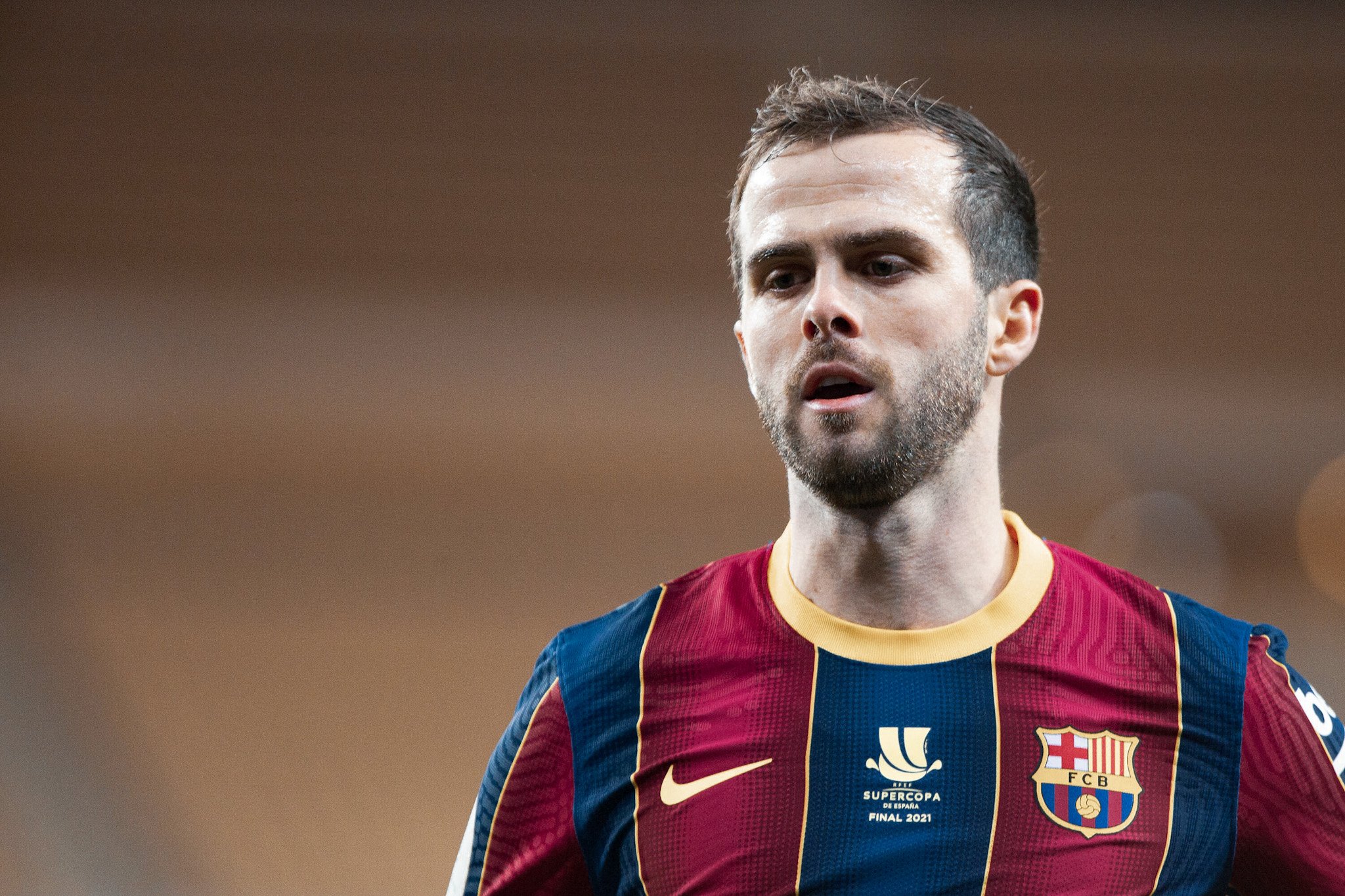 With the 2021 summer transfer window well and truly open, questions are lingering regarding the future of a certain Miralem Pjanic. The Bosnian had a season to forget with Futbol Club Barcelona, as he saw himself viciously outperformed by Pedri Gonzalez, Frenkie de Jong and Sergio Busquets, only to fall behind 18-year-old Ilaix Moriba in the pecking order as the season drew to a close.

While at some point it seemed as though Ronald Koeman and the Barcelona number 8 had found common ground about where and how he should play, a handful of disastrous performances saw the manager quickly fall out of love with him. Pjanic made vocal his dejection on plenty of occasions. “This season leaves me with a bitter taste and questions that still need answers… A hug to all the Cules, see you soon,” the Bosnian wrote on social media.

His arrival at the club was nothing short of bizarre. In one of Josep Maria Bartomeu’s most incomprehensible transfer decisions ever, the Blaugrana let go of Arthur Melo for Pjanic in a swap deal that truly had only one beneficiary; Juventus. In the Brazilian’s place came a seasoned footballer, but one well past his prime. Bartomeu, a man infamous for his short term thinking, saw only balancing the books, rather than an actual sporting project, as the way to go.

At 31, there is little left for him as he approaches the twilight of his career. While Barcelona may indeed have better options than the midfielder, a handful of clubs might be able to make better use of him. In this article, Barça Universal looks at three such clubs, their needs and what utility Pjanic could be to them.

Reunited with manager Maximiliano Allegri, Juventus are well on their way to recovering lost glory. The 2020/21 campaign was quite a calamitous one for Bianconeri. The former kings of Italy were victims of a steep fall from grace, one that saw them make it to the Champions League by the skin of the tooth.

One of the major reasons for the Turin-based club’s almighty descent was the inability to churn out good performances from their midfielders consistently. Having lost the Scudetto to arch-rivals Internazionale, Andrea Agnelli, and the rest of the Juve hierarchy now know that the club is in desperate need of midfield investments. With Allegri supposedly set to play a 4-2-3-1 on his return, Pjanic seems the perfect player for the club and is even rumoured on and off with a possible return.

In the double pivot role, Pjanic has had some memorable performances, for the Garnet and Blue, most notably against Juve themselves in the Allianz stadium. While he pales in comparison to his former self, the Bosnian still has some of the differential quality that the Old Lady are looking for.

A deal such as this would benefit all parties involved. La Vecchia Signora would acquire a brilliant player, be it as a starter or for rotational purposes. Pjanic would be back at his old club and could easily rediscover his form under a manager who consistently brought the best out of him. Barça, meanwhile, would relieve themselves of his wages and declutter their already jam-packed midfield.

On the back of one of their greatest seasons in the past decade, Inter Milan’s supporters have had to watch helplessly as Steven Zhang and his house of cards came crumbling down. Despite having just won the Serie A for the first time since 2010, the financial situation at the club has made it such that club manager Antonio Conte along with a good number of first-team players, either have left or are on their way out.

Having scored twice and provided a whopping ten assists last season, one such name is Nicolo Barella. His performances for the Nerazzurri last season have consolidated him as one of the chief transfer targets for a host of European clubs. Real Madrid reportedly have an eye on him as a possible replacement for Luka Modric, while Liverpool are looking to fill the void left by Georginio Wijnaldum.

Make no mistake — Miralem Pjanic and Barella are not the same kind of footballer. Nevertheless, while separated by a staggering seven years, there are commonalities in their play that Inter could take advantage of should their Italian powerhouse depart from the club.

The Bosnian’s versatility makes him easily one of the best on his day. He can occupy a box-to-box role, play as an attacking midfielder, and be a dominant force in the central midfield. Furthermore, his positional intelligence, ability to hold onto the ball and link defence to attack makes him a viable option for the Italian outfit. In search of greener pastures, the Milan bases club will be open to a move elsewhere, and given Inter’s calamitous financial situation,

Fresh from winning the UEFA Champions League, Chelsea are in the race to sign a midfielder. Following the departure of Billy Gilmour to Norwich, The Blues have just three options left at the heart of their midfield. Given their ownership and the fact they won European club football’s greatest prize means that they will be more than willing to splurge some cash in the transfer market.

Miralem Pjanic would be an excellent addition in this regard. With Thomas Tuchel’s side, the go-to formation is the 3-4-2-1. While Pjanic has, for the most part, been rather underwhelming during his time in the Garnet and Blue, he has on numerous occasions excelled when deployed ahead of a back three. He would also have the luxury of playing alongside the likes of Jorginho, N’Golo Kante and Mateo Kovacic.

A setup such as this would mitigate his weaknesses and accentuate his strengths — the odd long ball. Defence splitting passes and shots from outside the area, complemented with his astute understanding of the dynamics of positional play, make him the perfect candidate for the London club. His age might seem like an issue; however, Chelsea’s policy regarding players his age make it such that he would not be a nuisance over the long term.