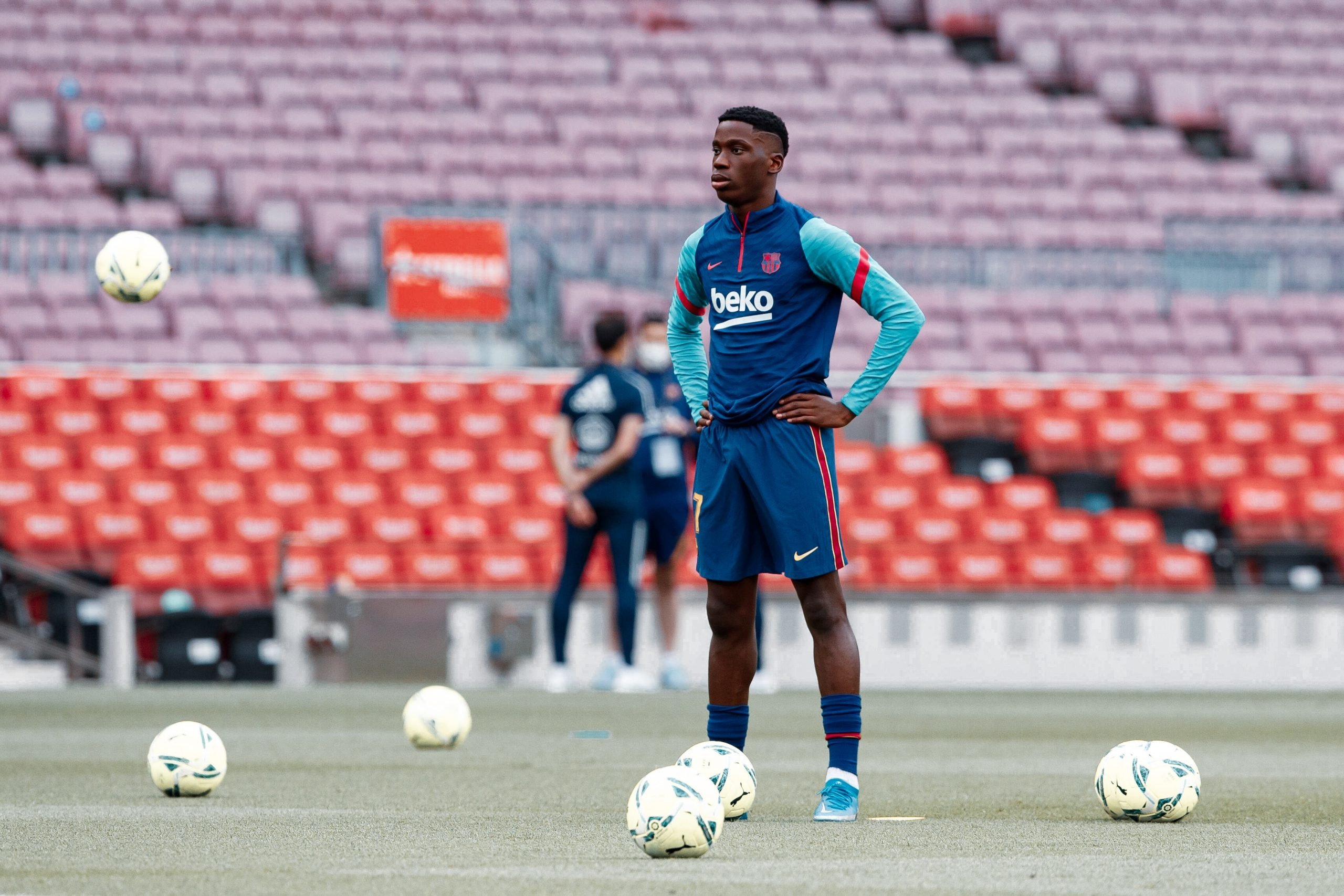 If Barcelona wanted a future with Ilaix Moriba, then the possibilities of this happening are dwindling by the minute. As he spoke during the presentation of Emerson Royal, Joan Laporta seemed anything but pleased with the behaviour of the 18-year-old and his representatives in regards to his contract renewal.

“If Ilaix doesn’t want to renew his contract, he has other options. We don’t want players that have grown up here and don’t want to renew their contracts. We’re sorry, but the club comes before anything else and we can’t have this kind of thing happening. I want them to think again because we want to reach an agreement,” Laporta said.

Moriba now has just a year left on his current deal with Barcelona, and slowing down his contract extension has meant that a host of European clubs are now knocking on his door. The Spaniard doesn’t seem interested in accepting the club’s terms, as Laporta pointed out.

Barça seeks to make a lesson out of this whole ordeal to the rest of La Masia. “We won’t accept that either and we have to send a message out to the youth players. We can’t have players that grew up here that don’t want to renew, and we can’t be promoting players and then having them leave without Barça getting any benefit,” he concluded.

In light of the possibility of Ilaix not representing Barcelona anymore, Barça Universal takes a look at three possible destinations for the youngster.

Liverpool have had one of their most disastrous seasons since the arrival of Jurgen Klopp in 2016. The Merseyside club suffered an entire season without Virgil Van Dijk, leading to a host of complications defensively. Adding insult to injury, the reds lost the services of Georginio Wijnaldum this summer, and are yet to adequately replace him.

The Dutchman had attracted Barcelona’s interest not too long ago, and slipped from the Catalans’ grasp at the last second to sign for Paris Saint Germain on a free deal.

In their midfield, the reds are rather thin. The departure of their number five has meant that one of their hardest and most versatile workers is nowhere to be seen. In addition to this, the alternatives to Wijnaldum are nothing to write home about.

Naby Keita has suffered through extensive bouts of injuries and inconsistency which have naturally led to him not being as important as his potential suggested. Alex Oxlade Chamberlain has similar issues with form and injuries. James Milner is 35 years of age and despite more or less maintaining a good level, this is not something he can do much longer.

You also have names such as Xherdan Shaqiri, Neco Williams and Harry Wilson, who easily could depart Anfield this summer. This is where Moriba comes into play.

His youth is something the Reds should be factoring into any deal. At 18, he is more than capable of leading Liverpool into the next decade. His profile also makes him a perfect fit for them. The Spaniard’s robust physique as well as technical ability add to the list of criteria that would surely grab the attention of the former Premier League champions.

Liverpool are in the market for a midfielder, and their transfer policy might suggest that they will be looking for one at a relatively low cost. At €25 million, Moriba is certainly not the cheapest, but in comparison to his alternatives, he is an absolute steal. Renato Sanches costs €35 Million, Youri Tielemans a whopping €75.2 million and another target Saul Niguez for over €50 million, 47 of which Atletico rejected the last time Liverpool knocked on their door.

From a sporting and financial standpoint, Moriba is a worthwhile investment, especially for a club like Liverpool.

On the back of a phenomenal domestic season, RB Leipzig are set to embark on a whole new journey with Jesse Marsch. Losing Julian Nagelsmann to rivals Bayern Munchen for around 20 million this summer was a hard blow to incur, but as is always the case with the world of football, there are always more to come.

The Bundesliga runners-up are set to lose one of their star midfield players before the start of the next season: Marcel Sabitzer. The Austrian midfielder grabbed the attention of a host of European heavyweights following his performances for Die Roten Bullen last season.

Sabitzer ended the 2020/21 campaign on eight goals and three assists, the third highest goal contributions tally in his side. In the six years since his debut for the club he racked up 52 goals and 46 assists, evidence of his sheer offensive importance for Leipzig.

Given the likes of AC Milan, Bayern Munich, Borussia Dortmund and Liverpool are all hot on his tail, the DFB Pokal finalists will have to think outside the box to find a solution to an impending midfield disaster. Ilaix Moriba slots in perfectly, both into the team and the dynamics of the Bundesliga itself.

With the sheer volume of pressures per game, passes in the final third per game and the intensity of Leipzig, Moriba would fit like a glove. His press resistance, while not perfect, is commendable and very much still in development.

At his tender age of 18, this is something that can be quite nimbly polished. He demonstrated a fair bit of this in the Barcelona first team, and this is easily applied elsewhere.

The Bundesliga itself is a hotbed for box to box and attacking midfielders such as Moriba. He would be the direct replacement for Sabitzer foe the German side. His sheer versatility as well as malleability, both immense because of his age, indicate that he could have quite the career ahead of him should he make the switch.

His pace, physicality and drive make it such that in the context of the German first division, he would thrive. With Barcelona looking for extra cash in the transfer window, the potential €25 million sale would go a long way in helping both clubs in the immediate and long term.

Few would picture a European champion to be in need of reinforcements. Regardless of their status as Champions League winners, Chelsea are far from perfect in the midfield region. They do undeniably have a brilliant team, but are painfully short of numbers in the midfield.

The Blues boast insane talents in the center of the park. With Euro winner Jorginho, N’Golo Kante and Mateo Kovacic, the Lions have a set trio should the manager desire it, but the waning number of substitutes make the task all the more difficult over a long season.

Billy Gilmour massively impressed in a number of cameo performances, but ended up being loaned out to Norwich. Ruben Loftus-Cheek has also long been linked to a loan move this summer, and reports state that an unnamed Bundesliga club could be interested in him.

As a positional play specialist, Thomas Tuchel would need someone resistant to pressure, as well as one capable of initiating it, while also being positionally astute. It is because of this that the signing of Ilaix Moriba could be of such importance. The Spaniard offers a wide array of skills and versatility in the midfield role all of which are at the backbone of positional play.

Their limited options also make the prospect of signing him all the more alluring. As was the case with Barcelona today, following the injuries of Frenkie de Jong and Gavi, on any given day one or even two of Chelsea’s midfielders could suffer an injury. The style of play, the footballer’s sheer potential, and the limited resources in the midfield make it such that the Blues might need to acquire his services.

The defending European champions have attempted to acquire Declan Rice from West Ham United, but the Hammers have made it difficult to sign him. His €100 Million fee is set to ward anyone off. With this in mind, Chelsea, who are already interested in acquiring Ilaix, could just go along with their plan.

Over the long term, they are certainly going to benefit from the deal, as this is a midfielder who can take them well into the next decade. In the immediate sense, he could be used as a rotational figure, amassing minutes every once in a while to hone his skills.

Barcelona would gain €25 Million from the deal, Chelsea would gain a prospect for the future, and Ilaix would get the salary increment he so desires. Everyone wins.