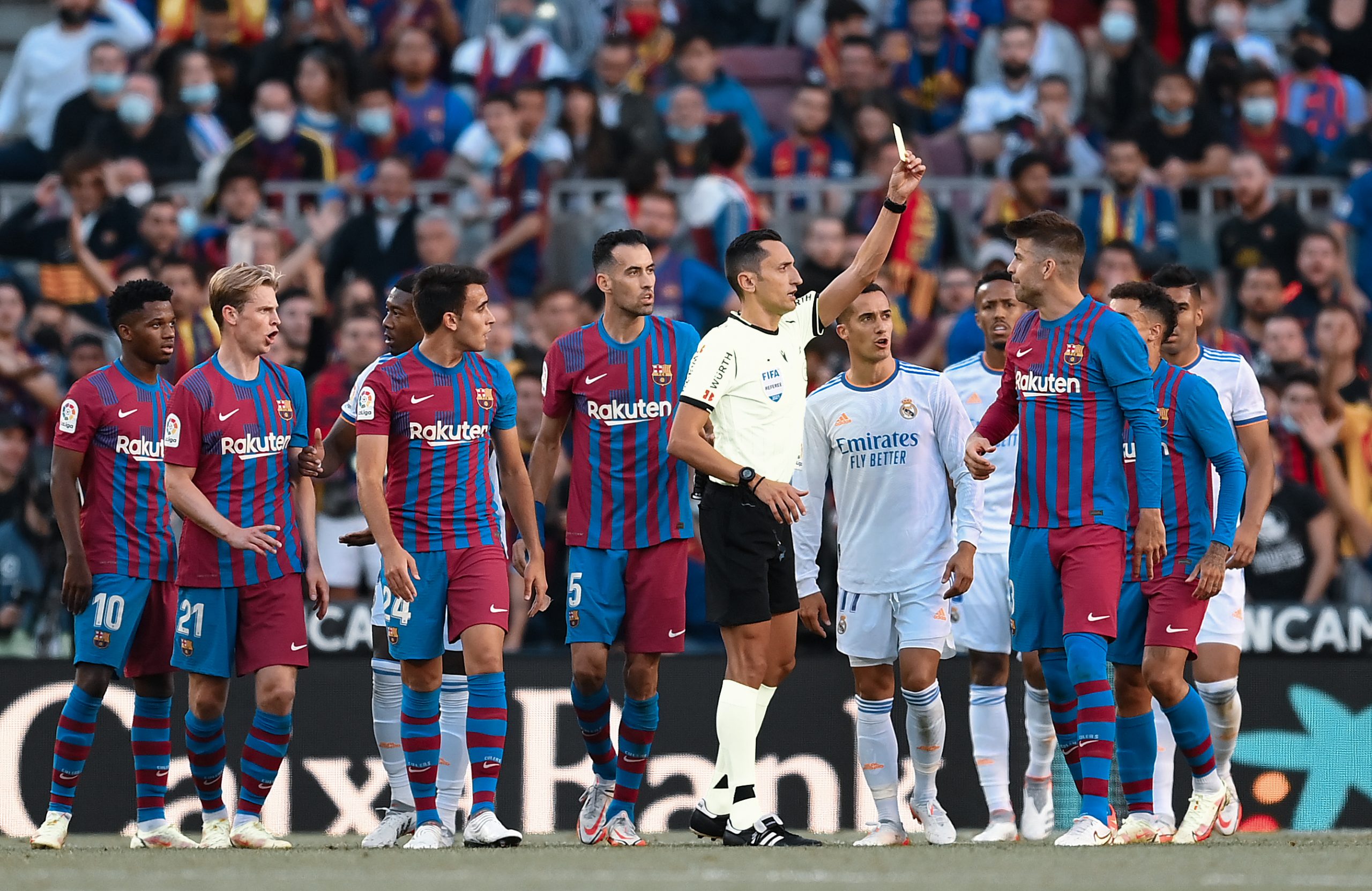 Barcelona vs Real Madrid has and will forever continue to be the world’s biggest football match. In recent years the tie between the two has been very one-sided, tilting largely in favour of Los Blancos. The Madrid giants have won a staggering four Clásicos in a row and are very much tipped to get their fifth victory against their Catalan counterparts.

In and of itself, Barça vs Madrid is not just a game but a war. It is more than a match between two clubs. It is the garnet and blue marching on as the representatives of the Catalan people, up against the royal establishment in kits adorned in their arch rivals’ angelic white.

As is the case with all wars, before their inevitable culmination, a plethora of determining battles take place before one of the rivals eventually throws in the towel. In the same spirit, Barça Universal takes a look at three key battles that will decide the winner of El Clasico.

The unstoppable force versus the seemingly immovable object, Vinicius Jr., up against Gerard Pique is set to be one of the most intense standoffs in the Clasico. The pair have known each other for quite some time, four years to be exact. In that time, the Brazilian has had the upper hand over his Spanish counterpart, however, their brewing rivalry has never been this intense.

Starting with the Brazilian, few players in Europe’s top five leagues have been anywhere near as consistent as he is. Vini, this season has unearthed a version of himself that barely anyone thought existed.

Under Carlo Ancelotti, his previous inability to so much as take a proper shot on goal has now metamorphosed into unreal proficiency in front of it. Twelve goals to his name this season already speaks volumes of his drastically improved finishing ability.

When it comes to his skills on the ball, Vinicius is indubitably one of the world’s best dribblers. In stark contrast to his flashier self back in 2018/19, the Real Madrid number 20 is much more mature and reliable with regards to his ability to make decisions. Both in quantity and quality, there is not a single soul that can deny the Brazilian’s exquisite dribbling ability.

Pique, on the other hand has characteristically been underappreciated, yet at the same time incredibly brilliant across the campaign. With Lionel Messi gone, the World Cup winner has taken up a leadership role in ways never expected of him. He has been utterly phenomenal defensively, providing rigidity in ways barely anybody would have expected of him.

This campaign he has led by example. With Eric Garcia next to him and the presence of Messi no longer there to bail Barcelona out, he has had to be at his very best to hold down the fort.

With regards to his passing ability, Geri is as immaculate as always. Often taking the team out of precarious situations when pressed by his rivals, he starts off attacks with ice in his veins.

In the defensive phases of his game, he has been much more rigid, making game-saving interceptions, blocks, and tackles. It is as though his 27-year-old self came back to give the team a final goodbye before his soon approaching retirement.

Duels involving Pique and Vinicius end one of two ways: either with the former flat on the ground having been dribbled or with the latter losing the ball after yet another tackle. This battle determines the scoreline, as the Brazilian getting past his man can spell the end for Marc-Andre ter Stegen in goal. For Barça to finally get one over Madrid, this is one battle Pique cannot afford to lose.

The midfield used to be Barcelona’s terrain a little over six years ago. As a result of the Catalans’ own ineptitude at timing departures, as well as Real Madrid’s exceptional management of their players, Barça have found themselves on the losing end of every battle at the centre of the park in recent years.

There is a rebirth of sorts taking place in the Catalans’ midfield, and Nico Gonzalez is a crucial part of this. The Masia player, and soon graduate, has been one of the brightest spots in what has otherwise been a quite gloomy campaign. The Spaniard has provided a safe haven for the Blaugrana both with regards to performance and availability on the pitch.

Nico’s two goals and one assist are nothing phenomenal, however other facets in his play have been integral to the team’s success in recent months.

His ball carrying ability makes him the ideal replacement for Frenkie de Jong in midfield, who, as it stands, is out injured. Furthermore, his defensive ability will be crucial for Barcelona, as he will come up against the very best in Toni Kroos.

The German is having one of his best seasons with Real Madrid. His performances are barely reflective of his age, as regardless of the season, he seems to be ageing like fine wine. Be it in his passing, pressing or positioning, every action he makes on the pitch is perfectly calculated. Kroos’ exceptional abilities on the ball are to die for.

Nico silencing him will go a long way in edging Barcelona ever closer to that elusive Clasico victory. Overall, whoever wins this midfield battle essentially takes the other out of the game and effectively renders the other team a man down.

This season, Marc Andre ter Stegen and Thibaut Courtois have been diametrically opposed in terms of performance. The German, for instance, has been quite irregular, and over the course of the past two and a half seasons, he can be rightfully accused of being subpar.

Mistakes that he otherwise would not be making little over three years are now regular. Ter Stegen has regressed, making even the banalest of saves, his most important role in the team, seem unique.

The bar has been dropped so low that doing the bare minimum as a keeper is seen as something worth lauding. It would be fair to say that he is seeing somewhat of a revival under Xavi Hernandez, however, he will be competing against a top goalkeeper in the form of Courtois.

The Belgian had a phenomenal 2021. According to FBRef, he finished 11.6 goals above his Post Shot Expected Goals. This essentially means that he conceded almost twelve goals below what he should theoretically have conceded for Real Madrid both this and half of the last term.

Form like this has been vital to their title challenge. Despite Real Madrid’s defence performing better than Barça’s, conceding careless chances has meant that Courtois’ aptitude in goal is what is keeping them far from Barça.

It is unsure how long this can last, as eventually, goalkeepers do revert to normal. What matters most to him and his club in the now is that he is performing better than the vast majority.

Up until now, the battle for the goal seems to have been won by Courtois. Can ter Stegen write a new chapter in this exciting tale, or will history repeat itself, providing even more dejection for an already broken goalkeeper?