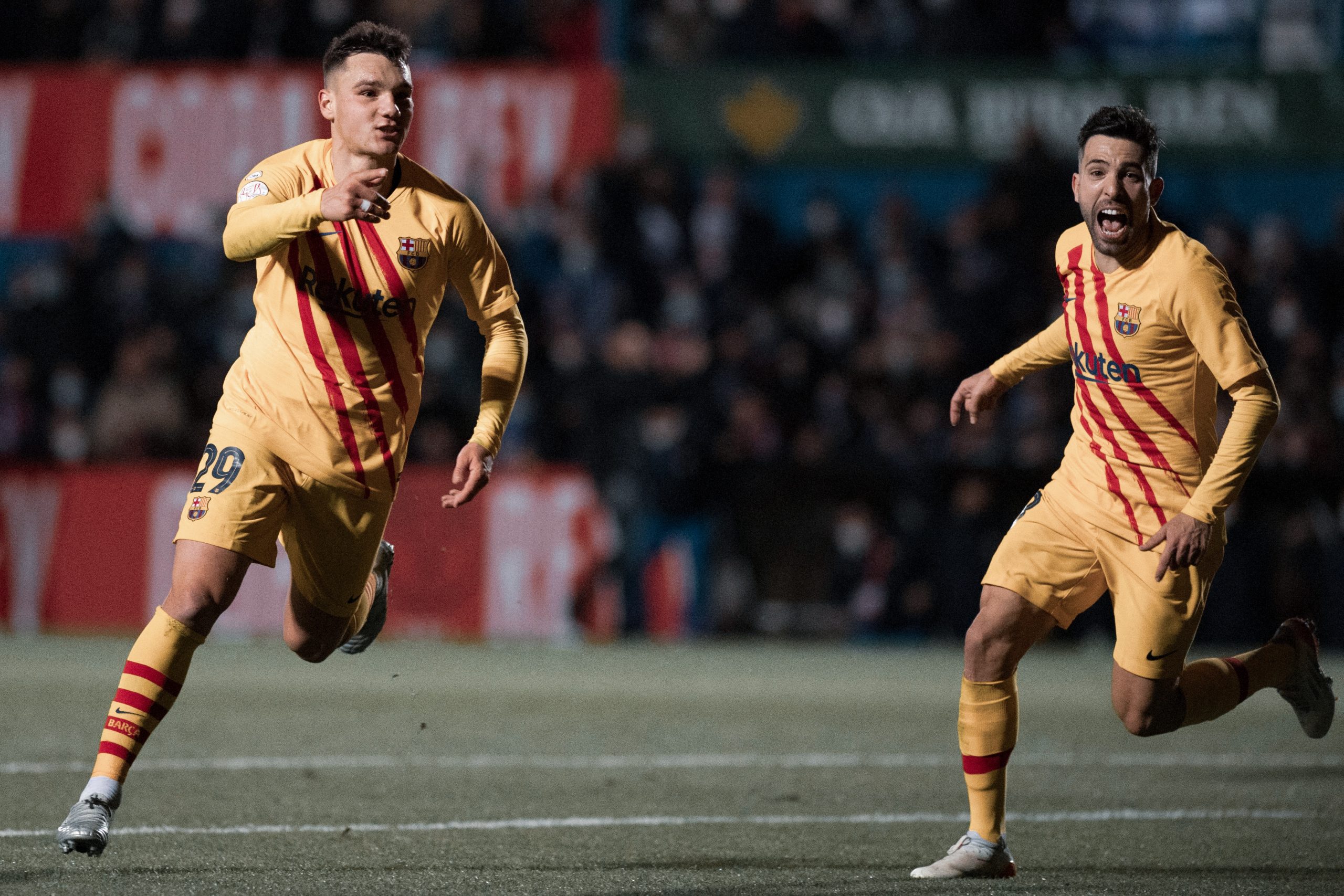 Barcelona played out quite the match away at Linares. The Catalans went a goal down in the first half. Thanks to some tactical adjustments by Xavi Hernandez, were quickly able to recover lost ground in the second period. The victory took the Garnet and Blue to the round of 16.

In this article, join Barça Universal as we explore three lessons learnt from Barça’s 1-2 win on away soil.

1. Dani Alves has still got it

Having been re-signed by Barcelona midway through November last year, many doubts were set around the possibility of Dani Alves performing. After all, the Brazilian is 38 years old, and had spent three years outside Europe’s top five leagues.

Expecting him to perform brilliantly was not all that realistic. Understandably, many believed him to be more of a tutor to Sergino Dest than a playing prospect.

Against Linares, he proved quite the opposite. Granted this is just a third division team, Alves was so tremendous all across the 90 minutes one would not even think he had left the club.

On the right flank, partnered by wingers in Ilias Akhomach in the first half and especially with Ousmane Dembele in the second, the Copa America winner was simply sensational.

At his age, nobody is expecting the Brazilian to trek upfield as he did in his late twenties. Despite the abject lack of expectation, he combined seamlessly with all those around him. Be it via a cross, a one-two, a tackle, or even a pass out of pressure, Alves did it all.

To make seven key passes, two of which were big chances, play seven accurate crosses and five long balls, at this age, is quite phenomenal in itself.

In several points in the match he played almost like a midfielder, with Dembele preserving width while he took advantage of the gaps subsequently created.

If this performance, like the one against Boca Juniors is anything to go by, it is that Dani Alves’ class, unlike mere form, is permanent. The world’s greatest ever right-back might have quite the role to play this season for Barça.

2. Barcelona prove yet again why they need a striker

Barcelona have, over the course of the past few months, been searching high and low for a proper presence to take up the striking role. The Catalan giants scoured Europe for someone who could arrive at low wages, and provide perhaps a rotational presence in the team.

Barça have, after all, criminally underperformed in the final third in La Liga and the Champions League. The chances they create proving they deserve better than the scorelines often reflect.

Today was no different, and if anything, much worse. A game against a third division side is logically meant to be a pushover. Four or five years ago, this was the type of game the Blaugrana would comfortably be winning 7-0. Last night, despite creating a whopping 24 chances, Barça could settle for nothing more than a twelfth of that in goals.

According to FotMob, Barcelona had five big chances created, 81% of the ball throughout the 90 minutes of play, a 90% passing success against the 57 of their hosts, nine accurate crosses, into the box, but settled for just two goals. The likes of Ferran Jutgla, Jordi Alba, Nico Gonzalez, Ousmane Dembele, among others, were culprits in this happening.

They cannot entirely be blamed, as they are not strikers. Nevertheless, games like this should push the board into searching for the necessary funds to improve their forward line. The first step has begun with the signing of Ferran Torres, but this should not be the end. A world beater, potential or proven, needs to make his way into this team.

Once this is done, games like this, where Barça were utterly dominant, will cease to be problematic. Since Xavi’s arrival, chance creation has not been the toughest thing in the world. The main issue is one of finishing.

One world class number nine, and we could be looking at Barcelona habitually finishing games like these by much larger scorelines, more representative of their efforts, than a 1-2 victory such as last night’s.

3. A wasted opportunity for Riqui Puig

Receiving adequate playing time has been a problem for Riqui Puig for quite some time. He has often been sidelined by his managers, only coming into prominence when there is no adversity.

Such was the case in 2020 when Arthur Melo was pushed aside. It is the same now with a plethora of injuries, suspensions and cases of illness riddled all throughout the Barcelona squad.

One of the talking points ahead of the game was that Riqui needed to perform at his utmost best. There is much more competition in the central midfield now than there has been in years, and he could simply not afford to play poorly in this game. Despite the sheer need for a solid performance, against a third division rival no less, he utterly failed.

A common problem the Spaniard suffers from pertains to his decision making ability. He perhaps underestimated the opposition, preferring to take many risks on the ball, but they were almost all uncalculated. He jeopardised certain attacks by being unnecessarily proactive on the ball.

An overcomplication of what should have been simple passes to a teammate was quite the motif in the tie against Linares. The Spaniard constantly looked for diagonal balls where and when there was no need to.

Defensively, Riqui was far from astute. His questionable positioning gave way for his rivals to run. Furthermore in the build up to the goal, he could have done far better to get to the ball first.

Riqui’s poor performance warranted a substitution, and he fell to the bench once more. This is precisely the kind of match he should not have had. Especially not as his direct rivals in Pedri and Gavi are soon returning. Perhaps Xavi will still maintain faith in him for a little while longer, however his days are numbered if he has more such games.