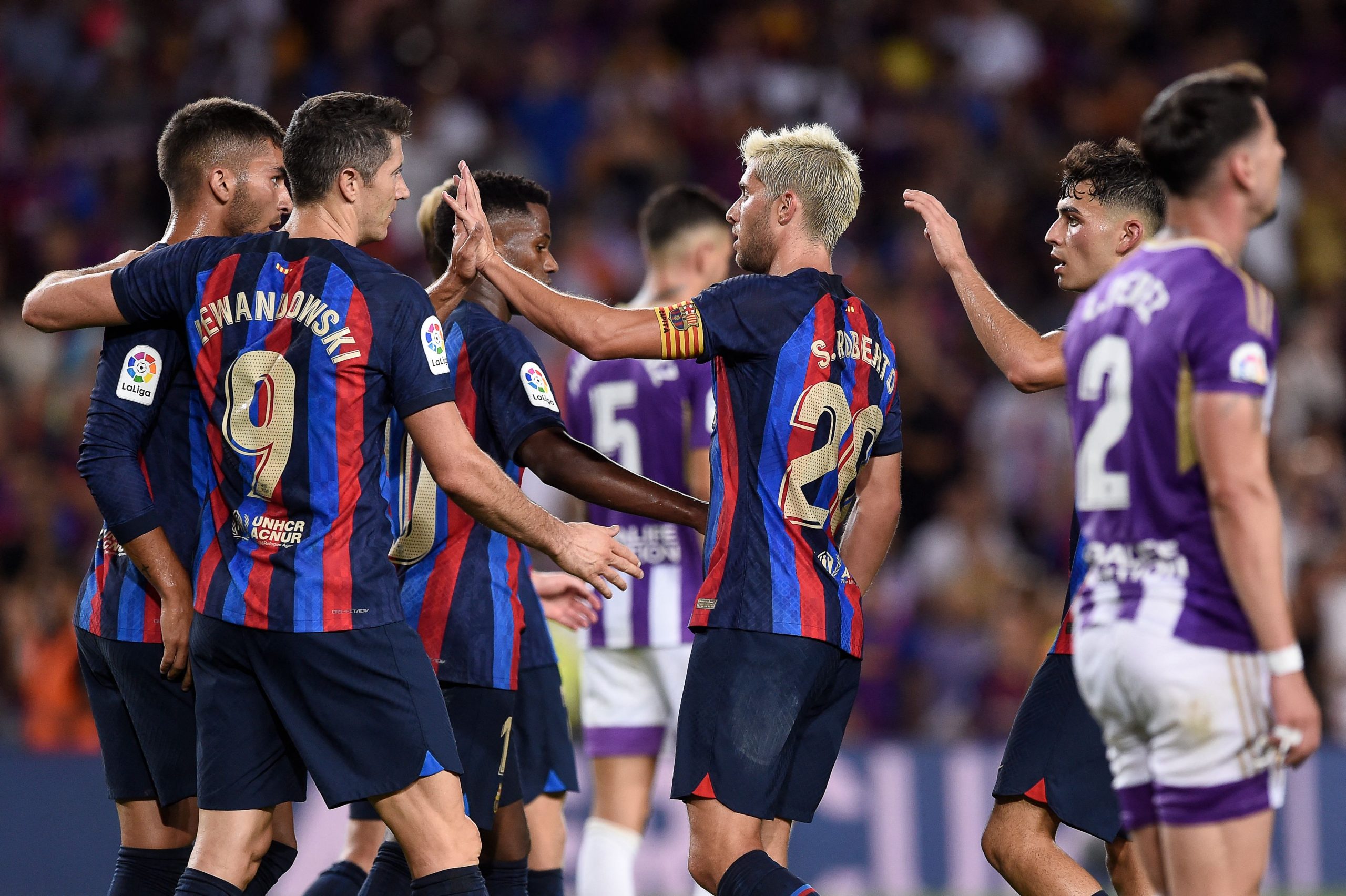 Barcelona played host to Real Valladolid aiming to get the blues from the game against Rayo Valleano behind them at home. This was predicted to be a tough tie, given the nature of the opposition to sit back and drop deep into their own half.

Notwithstanding the predicted difficulty, Barcelona overcame their opponents with utmost diligence.

Through a brace from Robert Lewandowski, and two goals from Pedri Gonzalez and Sergi Roberto, Barça steamrolled their opponents, beating them 4-0 on a memorable night at the Nou Camp.

In this piece, join Barça Universal as we explore three lessons that we learnt from the enthralling game.

Xavi Hernandez has made it abundantly clear that he does not trust Sergino Dest to represent the team, be it at right or left-back. The Spaniard would much prefer to start a centre-half than play the American.

Up until last night, the Puppet Master’s experiment was rather questionable. Ronald Araujo struggled to impose himself, making cheap mistakes in possession which often put Barça in peril.

With Jules Kounde, none of these problems persisted. The Frenchman did splendidly both on and off the ball despite the role not being his own. His distribution was always on point, facilitating phases of play for his midfielders and defensive partners.

Off the ball, Kounde was again reliable. Given his defensive acumen, whenever he needed to track back into the defence, he had both impeccable timing and commendable decision making. His goalline clearance sums up his defensive performance.

While in an optimal scenario, there would be no need to play somebody out of position, there is yet to be a replacement for Dest. Until then, it seems as though Kounde will be the man. Here is to hoping he takes the next game at right-back, against his former employers, in his stride too.

Little under two years ago, Barcelona’s wings were among their biggest issue. The Blaugrana had only Ousmane Dembele, who was regularly injured, and his replacement, Ansu Fati, soon after, developed the same issues.

Despite the torrid past, the garnet and blue now boast one of the best partnerships out wide of any club in Europe in Raphinha and Dembele. The pair lit up the Camp Nou, contributing to three of the four goals scored by Barça.

The Brazilian emasculated his rivals all throughout the match. Raphinha weaved his way through the purple and white defence, utilizing his mesmeric footwork to get past his opponents.

His assist itself was of quite some beauty. He played a perfectly weighted pass to Robert Lewandowski in the far post, giving him the best possible avenue to score on the volley.

Dembele meanwhile caused chaos within the Valladolid defence, and was rewarded with two assists.

The Frenchman confused his visitors’ defence with his relentless turns cutting in and out of the box. These movements gave him two assists, and a couple of efforts of his own at goal.

His mere presence was enough to instilll fear into his rivals, and this is exactly what one wants from their winger.

While for the most part, such a duo is not expected to work, Xavi Hernandez’ dynamic duo did a splendid job at threatening the rival goal. More of the same eccentric play will be expected against Sevilla next week.

Last season, a number of Barcelona’s players had far from their best seasons. Among these were Marc-Andre ter Stegen and Eric Garcia. Due to their performances they were often the subject of ridicule from the fanbase, but not anymore.

Ter Stegen has turned over a new leaf, and has proven, at least for these first few games, that he is back to his best. Those with keener eyes would have noticed glimpses of this rebirth earlier this year, as his form and saving ability came back under Xavi Hernandez.

When compiling statistics between FBRef and Fotmob, the German has conceded 3 post shot expected goals, and only has seen the ball go past him once. Form like this was missing in Barça’s worst times, and they will be glad to have ter Stegen back to his best self.

Eric Garcia, meanwhile, has begun to realise the potential that he had when he came from Manchester City.

Bar the obvious advantages that come from his splendid passing ability, the Spanish international was on hand to defend valiantly throughout the match. His performances now are reminiscent of Gerard Pique last season.

It is only early days, however with performances like these coming from the defensive cores of this team, then Barcelona have plenty to be hopeful for.

Ter Stegen and Eric Garcia’s redemption campaigns are well underway, and so too Barcelona’s quests for national dominance.