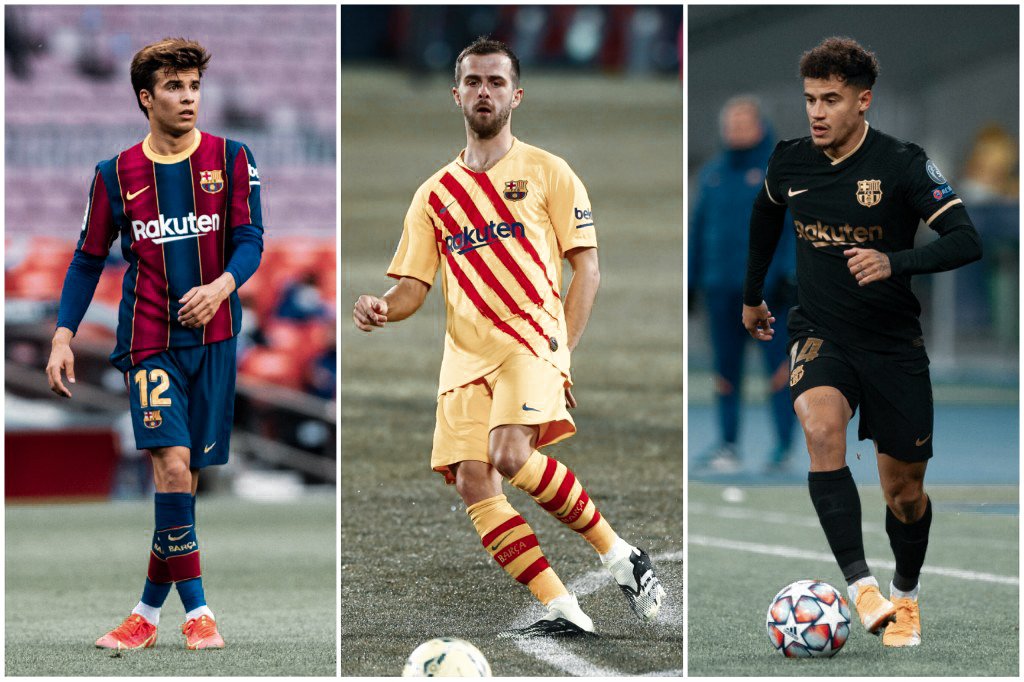 With Barcelona officially confirming Ronald Koeman’s continuity in a recent club statement, the team can fully focus on the upcoming season. 2020/21 was a campaign of mixed feelings throughout; a rollercoaster from start to finish, true to La Liga’s ultimately competitive nature.

Whether you believe Koeman staying is a good thing for the club or not is a different topic but the Dutchman has certainly warranted another year in the dugout.

After all, it was him who steadied a sinking ship and restored a mentally devastated fallen giant. Still, his strategies and ways were not to everyone’s taste and they will (likely) remain that way.

On one hand, Koeman was the one to give youngsters like Pedri and Ansu Fati a big role in the team but on the other, he was also the one to ostracise Riqui Puig completely.

Quite clearly, there will be players to profit from his extension as surely as there will be ones to suffer from it. At the end of the day, it’s difficult to please everyone, and not every profile or player will suit every coach’s philosophy.

So who are the players that might face another difficult season with Koeman at the helm again? Let’s take a closer look.

We can start with the obvious picks. Miralem Pjanić’s Barcelona career may very well be coming to an end but should he (somehow) opt to stay, he could be staring down the barrel of another long season. In 2020/21, as per Transfermarkt, the veteran midfielder has only played a total of 1295 minutes across all competitions.

Quite clearly, for a player of his calibre and reputation, this is a largely disappointing statistic. But his performances aside, it does feel like Koeman has no intention of giving him a larger role in the team.

There have already been reports of the Bosnian contemplating a transfer away from the Camp Nou before the summer is over and given the whole situation, it’s not exactly a stretch to think it will indeed happen.

Pjanić is a deep-lying midfielder by nature; a role Barcelona could use to a certain extent but one that is not an absolute necessity in their current system. Quite clearly, he’s not the Sergio Busquets replacement, and choosing one over the other is equivalent to choosing an entirely different approach altogether.

The 31-year-old offers an experience that a largely young midfield may need but if there’s no room for him in the no 8. role nor is he a suitable pivot option in Koeman’s structure, then how can one even justify his inclusion? This is especially true when considering the players that would potentially be ‘sacrificed’ to accommodate the Bosnian.

At the end of the day, unless something changes drastically, Pjanić will continue warming the bench (or the stands) more often than not. Should he decide to continue donning the Blue and Garnet, that is. How justified is Koeman’s clear (non) preference?

The upcoming season should provide us with more answers.

Another name on this list that doesn’t surprise many. Riqui Puig’s situation is a familiar topic or rather, a known mystery we’re yet to solve. Just like Pjanić before him, his performances haven’t exactly dictated his game time or lack thereof. Whenever we’ve seen him on the pitch, the 21-year-old was brilliant at what he does.

Puig is an incredible ball progressor and an exquisite passer at the same time. People are often tricked by his frail stature but that, in so many ways, is an advantage more so than a disadvantage. His technical ability and, even more importantly, understanding of what Barcelona need and want to do are what makes him a true La Masia prototype midfielder.

In that regard, 581 minutes across all competitions in 2020/21 is a crime, regardless of the reasoning behind it. As we’ve already stated, it’s not unusual for coaches to prefer certain profiles over others but to blatantly discard a player of Puig’s mould is to discard Barcelona’s philosophy in its essence and its purest form.

And sure, this sounds overly romanticised on our part and it very well may be but there is little argument to be had for turning the young midfielder into such an outcast. Especially for someone of Koeman’s ideology of nurturing the academy products. If someone was to give Puig a big(ger) role in the squad, it was supposed to be the Dutchman.

Past experience with youngsters, both Barcelona’s and others, have suggested so but alas, it was not to be. The up side is that there were some reports claiming Puig might get a bigger role come the upcoming season but those are just speculations until proven otherwise.

At this point, we can only hope it’s true because the young gem has what it takes to be a future superstar.

Probably the most surprising name on this shortlist of ostracised players. Philippe Coutinho’s campaign was cut short due to a serious injury he suffered at the end of last year, but is it too big of a stretch to say his game time would likely not have changed much anyway?

Of course, he would probably get more than just 792 minutes under his belt across all competitions but there are more things to be considered in this equation.

The biggest of which is surely the rise and development of Pedri. There are two scenarios that would’ve potentially unraveled had Coutinho stayed fit throughout the campaign. The first one is that Koeman would stick with him as his preferred option, therefore relegating Pedri to the bench — assuming Coutinho would’ve been used in the youngster’s current role.

There’s more to take into consideration here and there’s no telling whether his performances would’ve been enough to stifle Pedri’s involvement to a significant (and definitely detrimental) extent.

The other scenario is Koeman realising that Pedri is the present and the future, and despite having someone of Coutinho’s calibre to compete with, the youngster would still emerge victorious, therefore not altering the current circumstances too much but simply delaying them a bit.

It goes without saying that the second option is the more likely one given Pedri’s immense potential and quality. This is exactly what puts Coutinho on this list in the first place. In case the Brazilian stays at the club, which again is a big if, he’s likely to just be relegated to the bench anyway.

After all, it’s difficult to see Koeman drop Pedri, that much is certain with the whole 2020/21 serving as proof. By the end of the season, having accumulated 3526 minutes of relentless playtime, the 18-year-old was literally running on fumes from exhaustion. That’s how valued he was (and still is) by the coach.

Any player gunning for his spot in the squad next season is obviously going to have a rough time scraping for game time. Coutinho has been an outcast even before Pedri’s resurgence but with Koeman’s clear admiration for the youngster, chances are nothing much will change for the Brazilian once he’s fully recovered and ready to go in 2021/22.