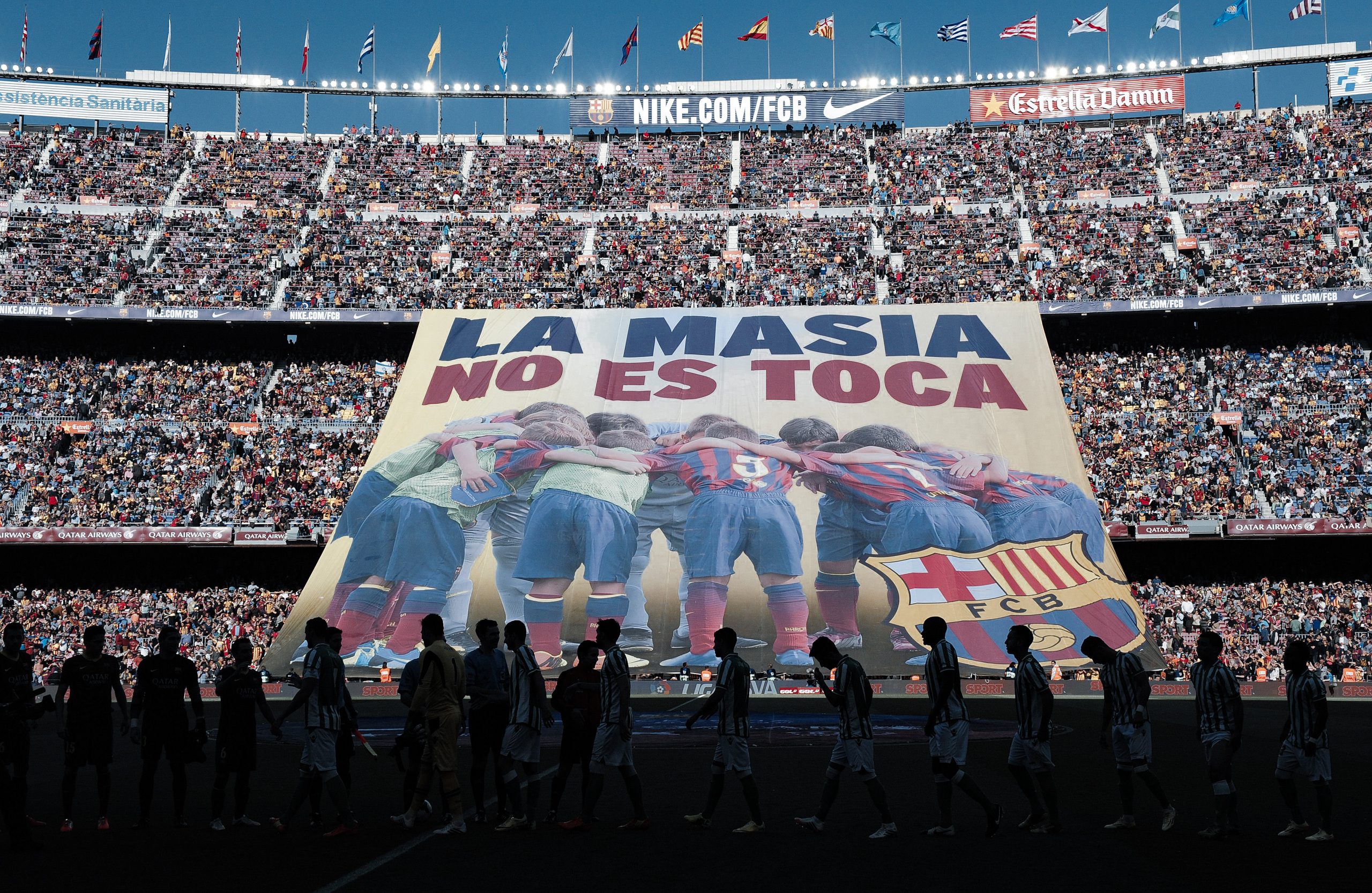 With a stacked season ahead, Barça Universal takes a look at three Barcelona B players who are most likely to break into the first team this season.

Barcelona have one of the best youth academies in world football in the form of La Masia. The club’s philosophy is to promote homegrown players from the academy and progress from within.

In recent years, due to administrative mismanagement, among other reasons, fewer and fewer players have made it to the first team. After Sergi Roberto, Ansu Fati is the only one to have completely established himself in the squad. However, there is never a lack of impressive players to pick from the academy.

Factors to be considered

Second, squad depth. Although there are some excellent players such as Ilaix Moriba, Nico Gonzales, and Jandro Orellana in midfield, the first-team midfield is just too stacked for any of them to get a whiff of being a first-team regular.

At 17, Balde can follow into Fati’s footsteps. (Photo via Imago)

Alejandro Balde is one of La Masia’s best prospects. He is a swift left-back, who is very unpredictable, great at 1v1s and technically sound. Born on 18 October 2003, he was initially great at athletics before starting football. Apparently, he used to be allowed to leave the starting line a second or two after the other kids, and he would still reach the finishing line first.

His pace has translated excellently into football, which was visible when he was at Espanyol. Initially playing at Sant Gabriel, he attracted interest from Barcelona but joined their rivals.

Balde was initially deployed as a striker, but the left-back position was later decided to be his best position. This is no surprise, as Balde is an impressive left-back, even without his speed. His positioning is incredible, but it’s his tackles which are even more so. Always measured and clean, the 17-year-old is well-versed in pressing as well.

In the case of Balde, it’s his attacking characteristics which are the highlight. The Spaniard is a very good dribbler, maintaining close-control while having pace as well. He often looks to cut inside in the final third, even driving into the penalty area at times.

Unpredictable and direct, his crossing is the cherry on top. For the Juvenil teams as well as for the Spanish youth sides, his whipped, pinpoint crosses are essentially a tap-in waiting for the striker.

Recently, Spanish media outlets reported that after Junior Firpo’s sale, the club will be counting on Alejandro Balde to be the second-choice left-back. This is great news as he is someone who has shown that the sky is the limit for him.

However, it’s also too much pressure for a 17-year-old who hasn’t even made his Barca B debut. Regardless of this, it seems he will be in the first-team plans this season, and should he be able to handle the pressure, the Blaugrana have a real diamond in their hands.

Konrad De la Fuente has already debuted, albeit unofficially, under Koeman and has been in the first-team squad-lists for a while now. He even made his US Men’s National Team debut as recently as on the 12th November 2020 and looked very comfortable playing at a higher level.

Konrad is a winger who has also been deployed through the middle. Though he is comfortable on both wings, he is right-footed and prefers to cut inside from the left. His 1v1s are visible as his strongest asset here. The American is explosive and spontaneous, and at times it seems as if even he is unsure what his next move is going to be an instant before he executes it.

If tames correctly, Konrad’s talent will skyrocket. (Photo via Imago)

When deployed down the right, Konrad proves that his crossing is often overlooked down the left. His crosses are very accurate, and he tends to cross from the byline, rather than from deep. He is a different type of player depending on the wing he is deployed on, as is to be expected. What’s impressive is how he has adapted both positions to make the most out of his skillset.

With Ansu Fati injured, Konrad is the player chosen to cover for him according to Spanish media outlets. That would be a great decision if it’s true. Konrad is someone for whom the talent and the opportunities are slowly coinciding into a player who knows how to make the most of every chance he is givens.

As Barcelona B’s season goes underway, there have been some early star performers as usual. Generally, the attackers or midfielders, or at most the full-backs are the ones who look the most influential. However, this season Arnau Comas has arguably been their best player.

Comes spent last season at Olot, but his loan proved to be different than the reputation they have received lately. It turned out to be a booster for Comas. Born in Cassa de la Selva on 11 April 2000, Comas was initially at Girona where he established himself as a very promising young central defender. He was recruited by Barcelona in 2010.

As expected, Comas is a Barcelona DNA defender. A very calm and composed player, he is positionally excellent as well.

Rather than always relying on tackles or strength, the 20-year-old is someone who prefers to position himself in a way that a tackle is always the secondary option. Always very calm under pressure, the Spaniard is a ball-playing-defender. As all Barcelona sides build-up from the back, the defenders have to be comfortable with the ball at their feet.

Arnau Comas is very capable of dribbling out of defence and driving forwards similar to the way Pique does. Though he can be conservative at times, and maybe too cautious, he does have this ability. Under Garcia Pimienta, Comas looks to be becoming a complete defender. He has looked solid against dribblers as well this season, demonstrating his adequate pace. At 180cm, his height is relatively average, but he still manages to perform very well aerially, even scoring the winner against Gimnastic de Tarragona.

The thrill of a match winner. (Photo via Imago)

The main issue with Comas’ progression to the first team is that he has the more experienced Oscar Mingueza ahead of him.

Even Santiago Ramos Mingo is a capable defender but out of those three, Comas is the most in-form and is showing his growing leadership, intelligence and defensive prowess. As Barcelona lack depth at center-back, Comas could very well make his debut this season, after which it is very possible that he could establish himself within the first team dynamics.

Alex Collado is someone who very likely could have been in the  three who could make their first-team breakthroughs. Especially since he would do very well in the mediapunta role Koeman deploys in his 4-2-3-1.

Collado is a very graceful attacking-midfielder who can also play on the wings. Still just 21 years of age, he has superb technique, good vision and awareness, and can launch an incredible shot as well. The main problem for him is the fact that he has Coutinho, Pedri and even Messi when paired up with Griezmann in that role, making his spot next to impossible right now.

Jandro Orellana is one of the personifications of everything La Masia strives for. A very humble, hardworking person and a very smart player with a lot of talent. He can play as a pivot or as an interior.

The Spaniard is a metronomic midfielder, and keeps things ticking for his team. His passing range and awareness are some of his strongest attributes. Always as calm as possible, Orellana has the talent, but it seems he won’t get the chance to display it this season given the overloaded midfield

When Barcelona played Celta in October, towards the end of the match a foul was given against a Barcelona player. Everyone saw it was clearly the wrong decision but since they were already comfortably leading nobody bothered to protest. Except the 19-year-old goalkeeper Tenas. And he wasn’t even on the pitch.

These examples of his passion for the club, his vocal nature and his leadership are plenty. To cap it off, he has been training with the first team for almost a year, is great with the ball at his feet and his reflexes are beyond impressive. Tenas is someone who can definitely make it in the first team, but this season it isn’t likely as he has two– even three if we include Inaki Pena – goalkeepers ahead of him.