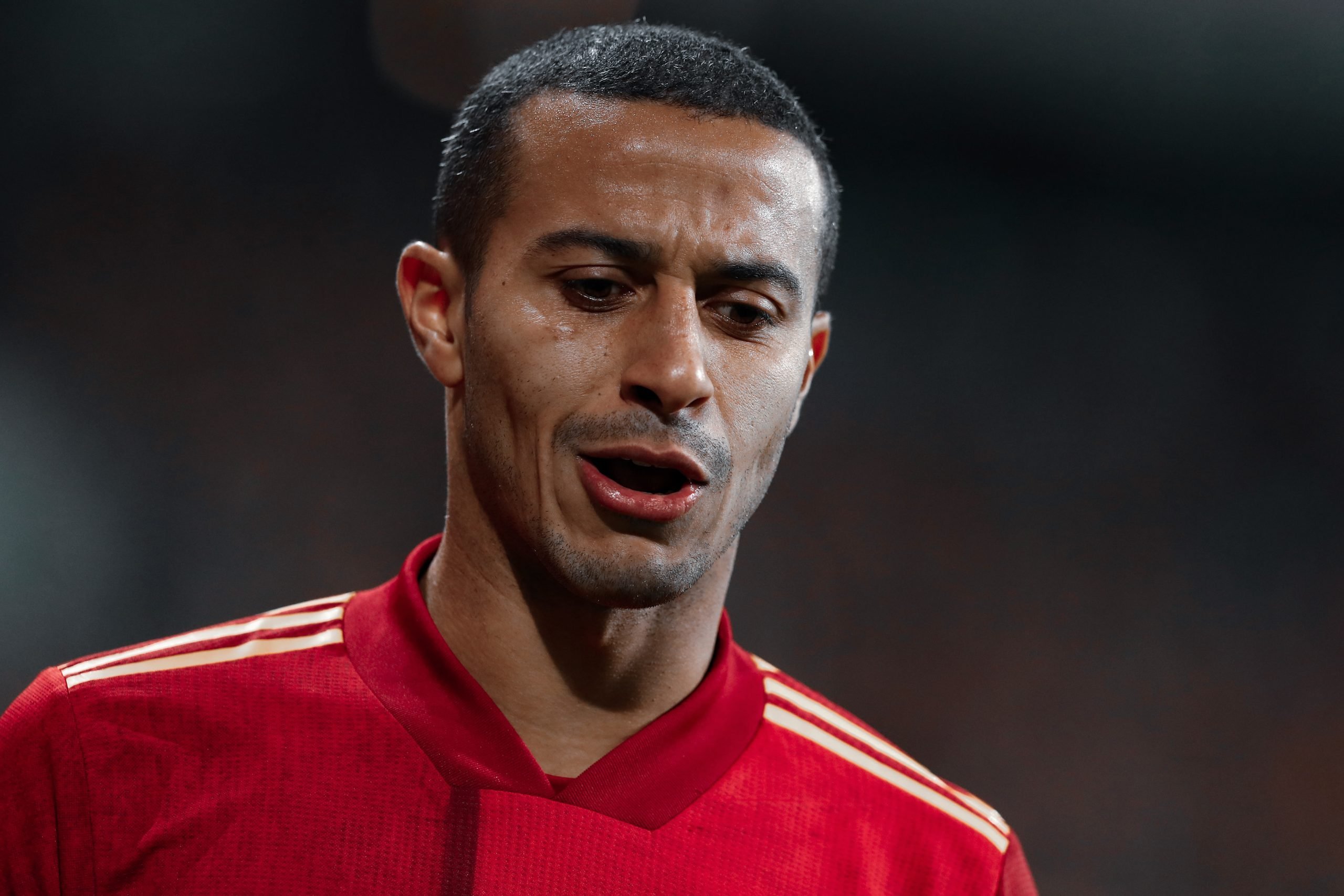 As Barcelona seem to debate between signing Bayern Munich’s Thiago Alcântara and Liverpool’s Georginio Wijnaldum, we analyse and discuss who would be a better option.

2020/21 will bring a very new life to Barcelona, under a new manager, a new coach, and then six months from now, a new board led by a new president. The previous seasons have not been kind on the team, and the squad will have to put behind multiple Champions League humiliations, foolish business, and to top it all off, the Lionel Messi saga, which ended no more than three days ago.

Prior to the start of every season, though, comes the transfer window accompanied with multiple links, rumours, ‘here we go’s, which would then trickle down to a handful official transfers and departures. As it stands, Barcelona have completed three transfers for the new season – all of which were made official mid-way during the last season – Francisco Trincão, Pedri and Matheus Fernandes.

And while president Josep Maria Bartomeu went on official record to state that nobody except seven players – Lionel Messi, Antoine Griezmann, Ousmane Dembélé, Frenkie de Jong, Marc-André ter Stegen, Clément Lenglet, Nélson Semedo – in the first team was indispensable, the sale of just one player, Ivan Rakitić, has been confirmed since the campaign ended. Shocker.

In recent weeks, however, Barcelona have been strongly linked to two players: Memphis Depay and Georginio Wijnaldum, after links to Donny van de Beek quickly died out. It does reek of Dutch agenda, but it is difficult to say so with certainty as all three players are excellent footballers and have done tremendous work under new Barça coach Ronald Koeman. According to reports, the club is confident that it can wrap up both deals for less than 60 million. 25 or 30 odd million for Depay could be too good to pass up on, but does the club really need the services of Wijnaldum?

Firstly, in the midfield department, Barcelona have Philippe Coutinho, Miralem Pjanić, Sergio Busquets, Frenkie de Jong, Carles Aleñá, Rafinha Alcântara, Pedri, Matheus Fernandes and Arturo Vidal on its payroll, with Riqui Puig expected to be given an official contract before the season begins. Preseason has just started, and Koeman will likely select his pick of the bunch, with the likes of Rafinha and Vidal suspected to be sold, while Matheus could be loaned.

But more importantly, Wijnaldum, while still one of the best in the Premier League, is a shadow of his former self. Moreover, he does not add anything to the team that is already missing from it, apart from attacking runs into the box which will be missing from the team after Vidal leaves.

Nevertheless, primarily, Wijnaldum’s role at Liverpool is to keep the midfield ticking at all times by moving into space to receive passes and then recycle them in the form of short passes – like Pjanić. He boasts of superb holdup play and can shield the ball during the transition. Gini Wijnalum is not particularly a creative presence in Liverpool but has often come up with the goods for the Netherlands under Koeman. His best quality, though, is his tremendous work rate and the willingness to contribute his 100% to the team in every game.

In theory, bringing in Wijnaldum could also halt the progress of promising youngster like Riqui Puig and Pedri, among others. Notwithstanding, if the club wants to invest in a midfielder, there is an alternative out there who can do what the Dutchman does, and so much more. If you have been following Barcelona on any social media platform (and if you read the title of the article), it is relatively easy to guess about whom we are talking. It is, of course, the La Masía graduate, and fellow 29-year-old, Thiago Alcântara.

“Thiago informed [sporting director] Hasan [Salihamidžić] that he would like to do something new again, and so it is. We will have to accept that. We have a contract that is still valid for one year and if he agrees with any club and that club should pay a transfer of a certain amount”

Thiago just completed a brilliant season at Bayern Munich, winning his second Champions League – this time as part of the treble –, but has spelt his time with the Bavarians and now wants to leave the club as confirmed by Bayern CEO Karl-Heinz Rummenigge. Quite naturally, there are quite a few clubs in for the Spaniard, with Liverpool leading the charge, as of two months ago. The Premier League winners need to raise money through player sales to complete the signing and have not received enough with the departure of Dejan Lovren.

For most of the 2019/20 term, Barcelona played with a three-man midfield consisting of Frenkie de Jong, Sergio Busquets and Arthur Melo. In theory, this midfield has very little range, with overlapping characteristics. As a solution, De Jong was given the role of carrying the ball into the final third and add creativity. Naturally, the Dutchman, who was only acting as a de facto attacking 8, looked uncomfortable more often than not but was the only creative outlet from the centre of the park. Arthur and Busquets failed to provide any innovation as well as Barcelona continued to recycle possession mindlessly from one side to another, hoping Lionel Messi to lose his markers. Meanwhile, the solution – Carles Aleñá – sat waiting in the pavilion.

There was a clear spike in creativity from the middle after the addition of Riqui Puig into the trifecta, and the fans will be hoping to see more of that. The other player that has already received the starting license from Koeman is De Jong, who was already heaping praises for the 23-year-old before joining Barcelona. But who is the third person that will complete this trio – if it is, in fact, a trio?

With the turn of the tide, reports linking Thiago to Barcelona have also arrived, as they do every year without fail. This time, though, they come in the form of an either/or scenario. As it stands, Ronald Koeman wants Wijnaldum to sign with the club, while the board wants to go after Thiago. The two parties are on crossroads, so we at Barça Universal analyse both players, and who could be a better fit in the team.

Since graduating from La Masía, Thiago has never shied away from talking about Sergio Busquets – the player he uses as a reference. Most recently, the 29-year-old spoke about Busquets while on international duty with him, saying that he was a reference for him because of the way he positions himself and how he leads the team. Much like Busquets, Thiago is incredibly press-resistant. There is not a possession he wastes and not a moment where he looks troubled.

“Busquets is a reference point. From Sergio Busquets you learn how to position yourself, as a leader of the team it’s amazing to watch him train and play. We all have games that aren’t so good, but you only have to see him on the pitch, the stats, he has the highest numbers in midfield in the world. Midfielders, to keep evolving, we have to look at Sergio Busquets”

To put this into context, Thiago completed 17 passes under press per 90 minutes, compared to Wijnaldum’s 8.53. This number is also higher than any Barcelona midfielder from last season, with Busquets the only one close with 14.5. Thiago is among the elite when it comes to shielding the ball, poorly controlling the ball only 0.66 times per 90, and being dispossessed 1.02 times per 90.

Fundamentally, both Wijnaldum and Thiago act as playmakers whose job is to keep the game in motion, and recycling possession. They both boast of similar passing accuracy as well – 90.7% vs 89.6 respectively –, despite the latter trying more risky passes. Last season, Thiago covered 445 yards through progressive passes per 90 minutes (passes played in the direction of the goal), compared to Wijnaldum’s mere 142.1 yards. Bayern Munich and Liverpool both operate mostly through the wing, but it is clear which of the two adds more creative depth to the team.

Again, Busquets is the only one who matches this statistic with 411 yards, but that is mostly because he is the deepest man in midfield and has many more passing options ahead of him.

This intricacy has continually come to light at the club since the departure of Luis Enrique. It slows down the game, giving the opposition more time to regroup in defence. It is also the reason Messi has to drop as deep as the halfway line to collect the ball sometimes because otherwise, it might never reach him.

All of the above adds to Thiago’s, and consequently, the team’s ability to create shot-creating actions and goal-scoring actions, a stat that measures the offensive actions that result in a shot, such as passes, fouls won, and dribbles. The Bayern midfielder trumps Wijnaldum by quite a margin here, as well, creating 2.85 opportunities to shoot, and 0.41 opportunities to score, juxtaposed to the Dutchman’s 1.38 and 0.09 respectively.

Thiago is often thought of as an aesthetically pleasing midfielder, one who turns, adds poise to his passes, and does some showboating every now and then. But at this point, it would be fair to mention that apart from all that, he is not afraid to do the dirty work. He adds defensive strength that trickles down to his excellent reading of the game, allowing him to predict the opposition’s offence. Last term, he made 2.34 interceptions and won 1.93 tackles per 90 minutes. Unsurprisingly, it is yet again, more than Wijnaldum’s 0.55 interceptions and 0.89 tackles per 90.

To be fair, though, his work rate is quite commendable, and the fact that he operates in midfield triumvirate and has more people to share his load of work. Thiago, on the other hand, usually plays as a part of a double pivot and has to play more of a hand in aiding the backline.

But, playing in a duo also meant Thiago had less space and fewer people to come to rescue him in case he committed himself as part of the attack. At Barcelona, he will have the chance to play with more men in the core of the pitch and become the beating heart of the team, much like Xavi Hernández before his departure. He is not only the clear winner from these stats; we think Wijnaldum’s inclusion to the dressing room could cause some unrest with the rest of the team who would have a clear memory of Anfield.

Thiago’s addition to the team would also mean a more liberated Messi – something the club has not seen in nearly three years. With that extra bit of air in his lungs and more stamina in his muscles, the Argentine could push the club towards greatness once again.