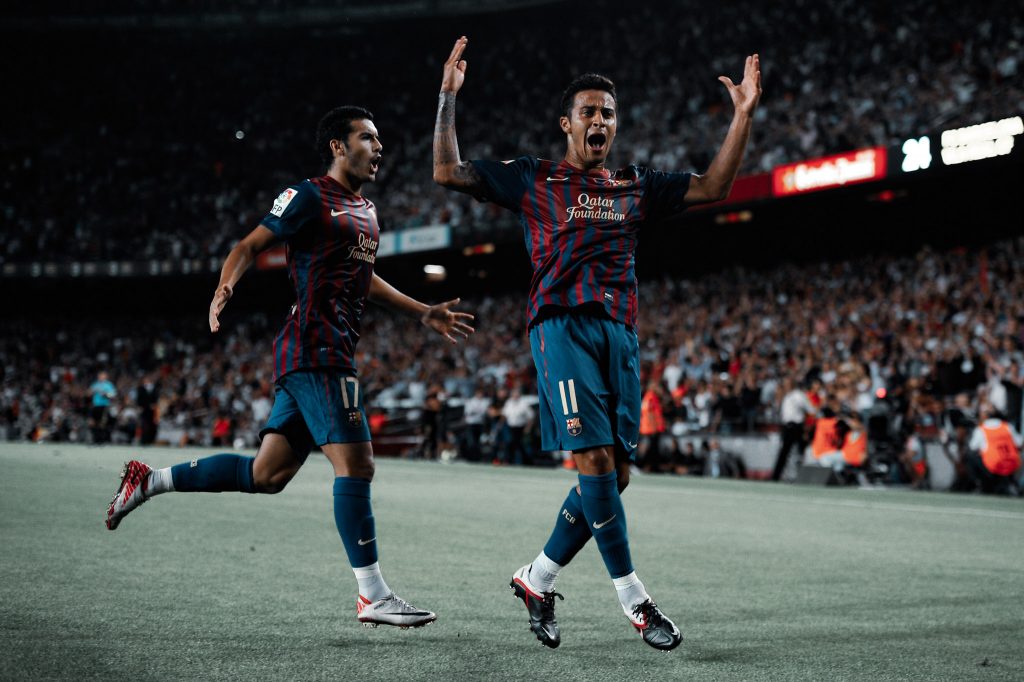 On Friday night, Barcelona will be facing Bayern Munich in the quarter finals of the Champions League. Thiago Alcântara, one of La Masía’s former graduates, will be facing his former team Barça. The Spaniard has been sensational for Die Roten. This raises the question of should Barcelona have let such a talent leave?

In 2013, Thiago Alcântara left Catalonia and moved to Bayern Munich. At the time, the blaugranas were blessed with incredible talent in midfield with Andrés Iniesta, Xavi Hernández and Sergio Busquets almost irreplaceable. However, the young Thiago was still getting game time in a strong Barcelona side. He had great mentors to learn from and understood the principles of the club.

Everything seemed to be going well and many saw him as the ideal replacement for the ageing Xavi. In the end, the board sold one of the brightest talents at the club for £22.50 million. Many culés will see this as a mistake as Thiago has developed into one of the best midfielders in the world.

The current one has been one of, if not the, best seasons in Thiago’s career | Photo by Sebastian Widmann / Bongarts via Getty Image

Around the time that Thiago left Barcelona, a new era was beginning at the club. Pep Guardiola had brought about one of the greatest dynasties in footballing history, playing Johan Cruyff football to near perfection. Under Pep, many youth team players were promoted such as Busquets, Pedro Rodríguez and Thiago. Guardiola was perfect for developing youth and put a big emphasis on this. He trusted the Barça B youngsters and gave them game time to help them grow. Joan Laporta, the president of Barcelona until 2010, was a big supported of this and supported youth development and Cruyff football. It was the perfect time for a young Thiago Alcântara to come through the ranks at the club.

However, when the new president was appointed in 2010, it saw this decade change drastically for Barcelona. Sandro Rosell marked the end of successful Cruyff football and La Masía became less important. The world-famous academy has been sadly neglected and youth players have suffered because of this. When Pep left in 2012, it was rumoured to be due to bad relations with the board. Rosell was the beginning of a decade for Barcelona that has been driven by money and not by football. Josep Maria Bartomeu, his successor, has carried on this pattern with questionable transfers, overpaying players and neglecting youth.

In 2013, when Guardiola was announced as the new Bayern Munich manger, it was no surprise that one of the first signings he made was one of his Barça protégées Thiago Alcântara. Rosell being too blind to see what a talent he was and Thiago having the option to link up with his former manager, it was a good move for the Spaniard. Since then, he has gone on to win many trophies with the German side and establish himself as a world class player. The now 29-year-old is a complete midfielder, both in defending and creating. He has an intelligent footballing brain and an incredible dribbling ability. His range of passing is sensational, and he is a joy to watch. Thiago Alcântara is a perfect fit for Barça.

“Thiago is the only player I want, that’s what I told them. It’ll be him or no one”

When you consider how much money Barcelona has spent trying to build a midfield since Alcantara left, it is staggering. Players such as Iván Rakitić, André Gomes, Denis Suárez, Arthur Melo, Frenkie de Jong, Paulinho and Arturo Vidal have all joined to varying degrees of success. Alex Song and Cesc Fàbregas were also bought in 2012 and 2011 respectively, a year or two before Thiago left. It is difficult to argue that any of them have reached the heights of the Bayern player, so far. If Barcelona had trusted their La Masía player then half of these signings would not have been made.

This transfer window it looks like the midfield maestro is set to leave the Bavarian club for a reduced price as his contract has one year remaining. Though 29 and being injury prone in the past, it would have been a smart signing for the azulgranas to make. Instead, due to the financial problems through years of reckless spending, Barça were forced into transfers to balance the books. They could have signed a midfielder that understands the Barcelona style and way of playing.

So many players that have signed over the last decade have failed to adapt to the club. Thiago is a prime example of why La Masía players should be trusted more. In the end, the Catalana lost one of the best academy graduates and have failed to replace his talents since. It is one of many poor transfers this decade which the board still has not learned from. When considering talents like Riqui Puig, the club cannot make the same mistake again. Buying midfielders that take away vital game time from the young prospect is damaging. He needs to play regularly and develop his game knowing he has the support of the club.