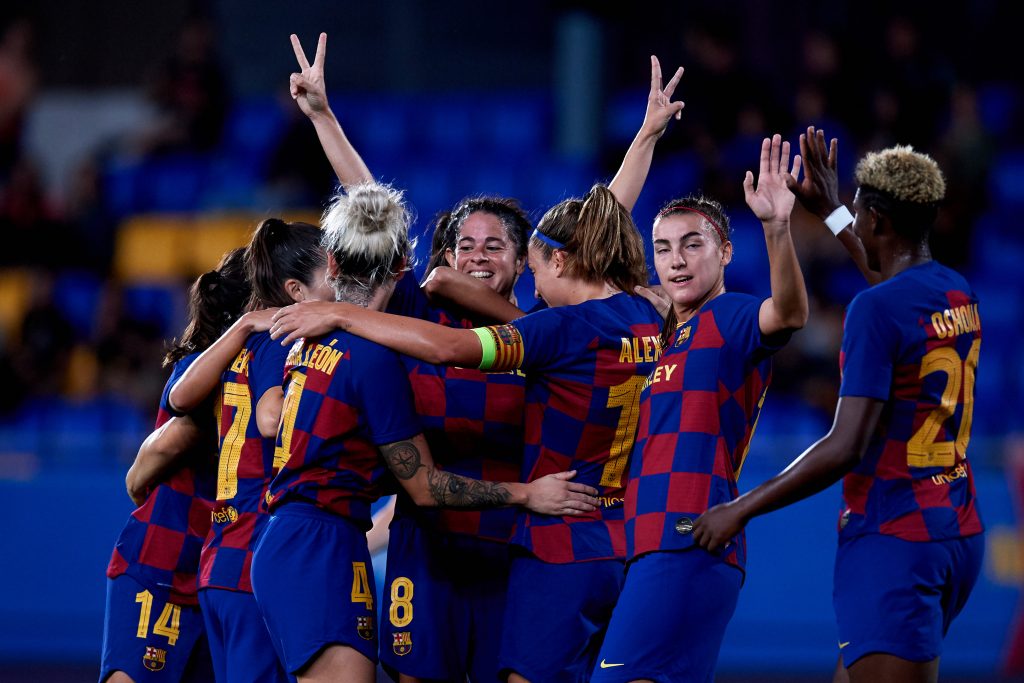 International Women’s Day it’s not a day to celebrate, but to raise awareness of all the difficulties and inequities that women experience nowadays. These difficulties also exist in women football. Despite the breakthrough in the feminine category in recent years, it was not always the case. It was a long road, which to date continue to fight.

International Women’s Day is a day that is commemorated around the world to raise awareness about the importance of empowering women in all settings, protecting their rights and ensuring that they can reach their full potential. This day serves to make visible the inequality and discrimination that women still live throughout the world, as well as the urgency of realizing their rights. As well as in everyday activities, in football, there is also discrimination and gender inequality towards women.

A couple of decades ago, football has stopped being a world exclusively for men. The women took the step to dispute the sport they were passionate about. However, there is still a way to go to increase gender equality in football. At the moment the process is being very fast, hopefully, follow this pace. However, there are still obstacles that don’t allow women to have the same privileges as men in this sport. Barriers must be removed as soon as possible to make this sport better.

The huge progress of women’s football

Although today a decent part of the population enjoys the quality of women’s football, it wasn’t always the case. It was until 1980 that FIFA made it official for women to play football in a professional environment and be able to live on it as a job. Even so, before it became official, there were already teams like the Barça Femení that had already played since 1970 without having the FIFA’s “permission”.

The women have played only 8 Women’s World Cup, the same amount of championship if we combine those with countries like Italy and Germany in the male’s football. However, with their short time since it became official, they have generated great growth.

The Women’s World Cup has undergone a great change since its first edition back in 1991 in China. That competition had 12 participants and only 45 teams disputed the qualification phase. The stats of the last World Cup in France in 2019 showed a lot of progress: 24 countries competed to win the title and another 110 didn’t get the ticket after being eliminated in the qualifying phase. Breaking all the records of TV viewers and attendance during the tournament.

According to official FIFA stats, around 26 million women play soccer regularly in 180 countries around the world. For its part, the 2014-2015 UEFA balance sheet on women’s football in Europe shows more interesting data that emphasize the rapid growth of women’s competition in the old continent: the number of women who play football is has multiplied fivefold since 1985, there are more than 7,000 female referees and 21,000 coaches; 53 European countries have a national women’s team and 51 countries organize their own women’s league.

The difficulties of women in this sport

There are currently very few women’s teams that have their own stadium. Just in August of last year the Barnsley WFC in England announced the construction of the first exclusive stadium for a women’s team in England with an approximate capacity of 2 million people. Most female professional teams share the stadium with the minor categories of male teams, such as the Barça Femení, or play in the stadium of their male first team. Other teams have their own, non-exclusive, coliseum that doesn’t reach 500,000 people.

The good news is that last season there were two important women’s matches in a week. In 2019 Juventus v Fiorentina broke the record of attendance in Italy with 39,000 people at Allianz Stadium and that same week, Atlético v Barça Femení broke the world record in a club game with 60,000 people at the Wanda Metropolitano. Even so, many women’s teams need their exclusive stadium in this sport with a decent capacity.

In everyday life, the salary of women is significantly lower than that of men. Football, it’s not the exception. In the Women’s professional league of Spain, Primera Iberdrola, players charge the amount that male clubs offer as a minimum wage. The most charged is Lieke Martens of Barça Femení, whose salary is around 120,000 euros gross per year. His salary is equivalent and even lower than that of some youths of Barça and Real Madrid.

However, the minimum wage, and the one that most women earn for playing football, is only 8,000 euros per year. Other players earn around 15,000 euros and less than 2% of players earn more than 40,000 euros. Barça Femení was runner-up in the Champions League last season with a budget of 3.5 million euros. That’s less than the salary of Jeison Murillo last year, center-back that left the Camp Nou having played only 2 games (tie in Huesca and defeat in Balaidos).

La Liga set a minimum salary for the men’s First Division players of 155,000 euros and 77,500 in Second. That’s, the women’s best player in the world in 2017 doesn’t reach the minimum salary of La Liga and 90% of the players earn less than any of the second division league. In fact, in Second B, and some in Third, the players receive higher amounts than those many women’s players.

Discrimination and lack of opportunities

There are also problems that statistics cannot show as discrimination is. In the world, there are millions of women with the desire and dream of playing the beautiful game. Women who have the talent to dominate football but aren’t allowed to play. We live in a society where a person who is born a man already has more advantages than another who is born a woman. In football, the same thing happens, if you are a man you have more opportunities to excel, but if you are a woman, you will have more obstacles than solutions.

Another obstacle facing women’s football is television rights. The world record for attendance in a women’s match (Atletico v Barça Femení) wasn’t broadcasted on TV. To watch it, people had to enter on the official YouTube channel of Los Azulgranas.

“Clearly, those of us women who play football wish that there was more coverage.”

There are numerous clubs that have signed contracts with companies to broadcast the games but at such a low price that big teams like Barça Femeni rejected. In Spain, a great advance has been achieved by increasing the average of spectators with an average of 100,000 in the season, according to the reports of Canal GOL, who has the rights to broadcast most of the women’s matches. It’s a large number but for them but the number could get even higher.

Barça Femení: one of the pioneers in women’s football clubs

The Barça Femení were among the first pioneers in promoting women’s football around the world. 10 years before FIFA formalized football in this category there was already a team that did everything to promote football in this genre.

On December 25, 1970, thanks to an initiative of the player Imma Cabecerán, the first match of the women’s club was played at the Camp Nou, with the EU Centelles as a rival. The coach was the legendary former culé goalkeeper Antoni Ramallets, who would hold the position for more than a year. However, that team of Barcelona girls, who wasn’t officially recognized by the Club, couldn’t wear the Barça shirt or use the name of FC Barcelona. The XI that played that Christmas day was called Selección Ciudad de Barcelona and worn a white shirt, blue pants, and Barça socks.

This inspired most European and Spanish teams to do the same. This is how with the support of 8 other clubs they created the first professional League in Spain in the 1988-89 season. From there the rest is history. There have been bad and good moments in which the Blaugranas have been able to dominate Spain and be one of the strongest teams in Europe. We are in this era. Scoring 86 goals and only conceding 6 goals in 21 games is proof of that. They are currently leaders with 59 points, have just won the Women’s Super Cup 10-1 against Real Sociedad and are still alive in the Copa de la Reina and the Champions League.

“Before, we used to spend at least 500 euros each season on two pairs of rubber boots. And 750 if we wanted to also have a pair with aluminum boots. Now, they send me four pairs and a lot of clothes every two months “

What is expected on women’s day?

Today is not a celebration. In football, it is clear that there has been a great and rapid progress over the years but there is still a long way to go. Wages, TV rights, poor attendance at stadiums and discrimination. These factors are experienced day by day by women. These are signs that much remains to be done and that, unfortunately, gender inequality still exists.

Today we must realize that women’s football has to be as important as men’s. That women’s football is entertaining. People should start watching more games in this category and promote equality. I hope to see in the following years that these more spectators, fans, women coaches, women presidents in football every day. That there be the same number of fans in the male as the female.

What can Braithwaite add to the Barça of Setién?
What did you think of this article?