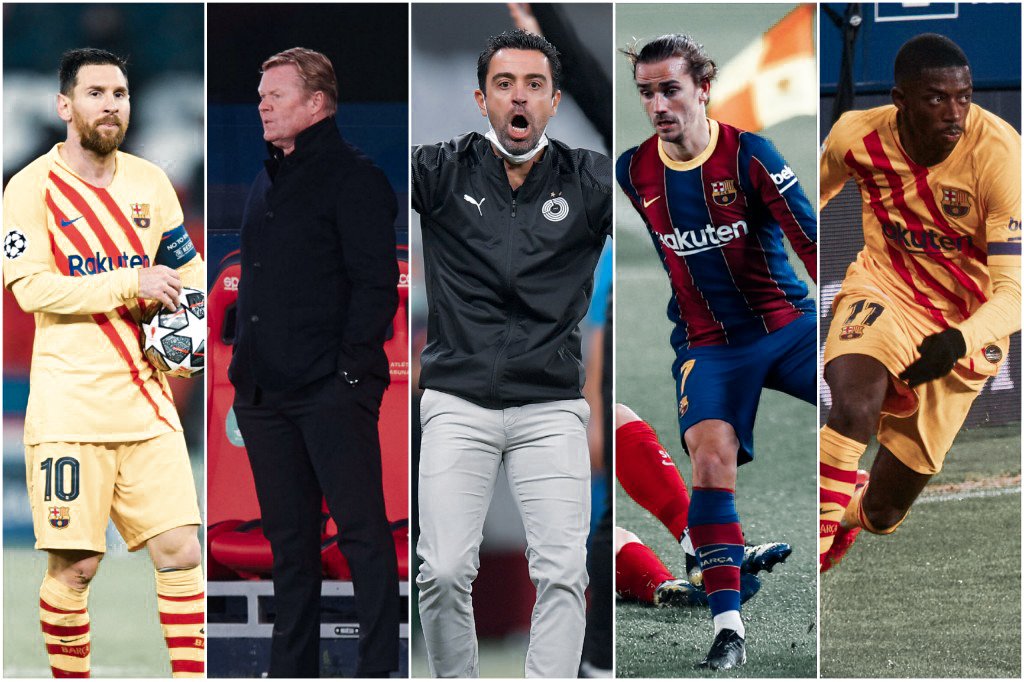 The new era is dawning at Barcelona and, with it, a brand new beginning. Of course, new beginnings are all about change and without change, there can also be no improvement. We know as much by judging the years gone by in which the Catalan giants were far from successful, signalling something different was going to be necessary to get them out of the slump.

And now, Joan Laporta is back. The president who oversaw the creation of the Pep Guardiola squad that went on to define a whole style of football is here to make things right. However, while we finally have a new leader, there are still plenty of things left in the dark.

Laporta may be a charismatic leader, and his sporting project hopefully solid, but we’re yet to get answers to most of our questions. For that reason, Barça Universal tries and address five different unknowns at Barcelona and decipher what the future holds for them.

It would be best to get the most obvious one out of the way first. The future of Lionel Messi is still in the dark. The Argentine’s contract is going to expire in June, and we are yet to receive a definite decision on what comes next in the illustrious career of Leo Messi.

That, needless to say, is quite troubling and is keeping everyone at Barcelona on the edge of their seat. However, with the election of Laporta as the new president, Messi’s chances of staying have risen immensely. Now, if some of the reports are to be believed, he and his entourage are ready to listen to Barcelona and their proposal.

Of course, let’s not forget the likes of Paris Saint-Germain and Manchester City are still lurking in the shadows. Should Leo decide it’s time to go, they will be ready to pounce, especially the French titans who have the financial power to make such a move happen.

But the decision is ultimately Leo’s and all Barcelona – and Laporta – can do is present him with an excellent sporting project. With Messi, it’s never really been about the money. He wants to win and wants to do it with Barcelona. Moreover, who will replace him?

It sounds simple, of course, and yet, that’s the only thing the club hasn’t been able to give him for the last five years or so.

For that reason, decisive months are ahead.

Another very ‘controversial’ figure at Barcelona is their gaffer himself, Ronald Koeman. The Dutchman is a club legend but that is often not enough to get the necessary results as a coach. We’ve seen as much in Frank Lampard at Chelsea or Andrea Pirlo at Juventus but Koeman is – so far- doing quite well.

Yes, the start to his tenure was challenging and everything seemed to be going the wrong way. However, fast forward towards the latter stages of the season and Barcelona are finally improving. Of course, some may argue we’re still far from our goal, citing the 5-2 defeat at the hands of Paris Saint-Germain in the Champions League as ultimate proof.

That cannot be ignored and it tells you just how difficult life is in Catalonia when a 5-2 result with a good second leg is considered an improvement. But there is an improvement and no one can deny it. Koeman is making the squad happy by getting the best out of them.

The young players are also being groomed and trusted, which is the key to a healthy future. As far as results are concerned, Barcelona will have another shot at the Copa del Rey title and are still in the race for La Liga.

All of that signals that their 2020/21 season, which is largely being considered as ‘transitional’, could still end on a high note. Of course, it could still end in the gutters too but Koeman has also instilled belief, optimism and happiness into this squad.

Will he remain as the coach of Barcelona come next season? That much we do not know but it does seem like the fair thing to do.

Xavi Hernández’s future is closely tied to Koeman’s. One’s fortune may mean the other’s misfortune, unfortunately. The only way for Xavi to get instilled as the new head coach is for Barcelona to fire Koeman and if they decide Koeman should stay, that means Xavi won’t be appointed just yet. It’s as simple as that.

Of course, there are other variables in play. Xavi could first make his grand return as an assistant or maybe a general manager. There is always a way for those that try but there is also a feeling Xavi will indeed take over the first team once he comes back to Barcelona. After all, that’s the dream of so many fans, players and the socis.

He is seen as the second coming of Guardiola and the one to continue the late Johan Cruyff’s legacy in Catalonia. However, as much as he is needed and will eventually coach Barcelona, we have to consider when is the right time to make that move.

After all, Koeman is doing a fine job, as we’ve alluded to earlier. Getting rid of him, even if it’s in favour of Xavi, could unsettle a team that’s finally starting to click. The squad is happy, they’re playing some nice football and there’s finally optimism and hope in their ranks.

Maybe it wouldn’t be such a bad idea to first finish Koeman’s chapter before diving into Xavi’s.

His time will inevitably come but let’s not rush it.

It really does feel like we’re constantly coming back to Antoine Griezmann, week after week. Even though the Frenchman sometimes gives us reason to be optimistic, at other times it’s really frustrating to watch him in Blaugrana colours.

Griezmann is an elite player but one that doesn’t really have a well-defined role in the team. He is not the striker Barcelona so desperately need, nor the most creative presence. Or rather, the role that he wants to have either doesn’t exactly exist or is already taken. This, along with the simple fact he has a lucrative contract at the Camp Nou, makes his case quite a mystery.

And while Xavi’s fate is closely tied with Koeman’s, Griezmann’s is to Messi’s. It does feel like he could indeed find his place beneath the Catalans stars if Leo really decides to leave the club. That way, Griezmann could potentially be the star of the show and the main protagonist.

However, with Barcelona actively looking to convince Messi to stay, it also feels they’ll have to be actively looking to sell Griezmann as well. Of course, let’s not jump the gun here. The Frenchman, as we’ve said, is an elite forward and so we have to hope he can turn things around.

But if that doesn’t happen soon, it may be time to say goodbye, especially with the likes of Erling Braut Haaland on Barcelona’s radar.

The final person our list is none other than Ousmane Dembélé. The young winger has been outstanding for the last couple of weeks and is finally starting to break out of his shell at Barcelona. Still, despite obvious good signs, Dembélé is far from a finished product.

At the age of just 23, there’s still a way to go before he can proudly say he’s among the best players in the world, which, let’s make it clear, he has the potential to achieve. The Frenchman is consistently among the most dangerous Barcelona squad members whenever he’s on the pitch and that’s saying a lot.

However, there are still some flaws in his overall game. Dembélé’s finishing needs to improve drastically even though most of his goals have been outrageously good. That makes his player profile so incredibly exciting and yet, so frustrating at the same time.

But we also shouldn’t forget that unless your name is Haaland or Kylian Mbappé, you still have a way to go before you grow into an elite player at such a young age. Dembélé can certainly get there but in modern football, big talents are often not given enough time and patience to reach their potential.

It doesn’t help that his contract is slowly but surely expiring and Laporta and Koeman have a big decision to make in the coming weeks and months. If he is to be sold, that needs to happen this summer and the same goes for the altenative.

Should Barcelona decide to keep him and put some trust in the youngster, a new contract is the way to go.

Either way, his future is still in the dark.