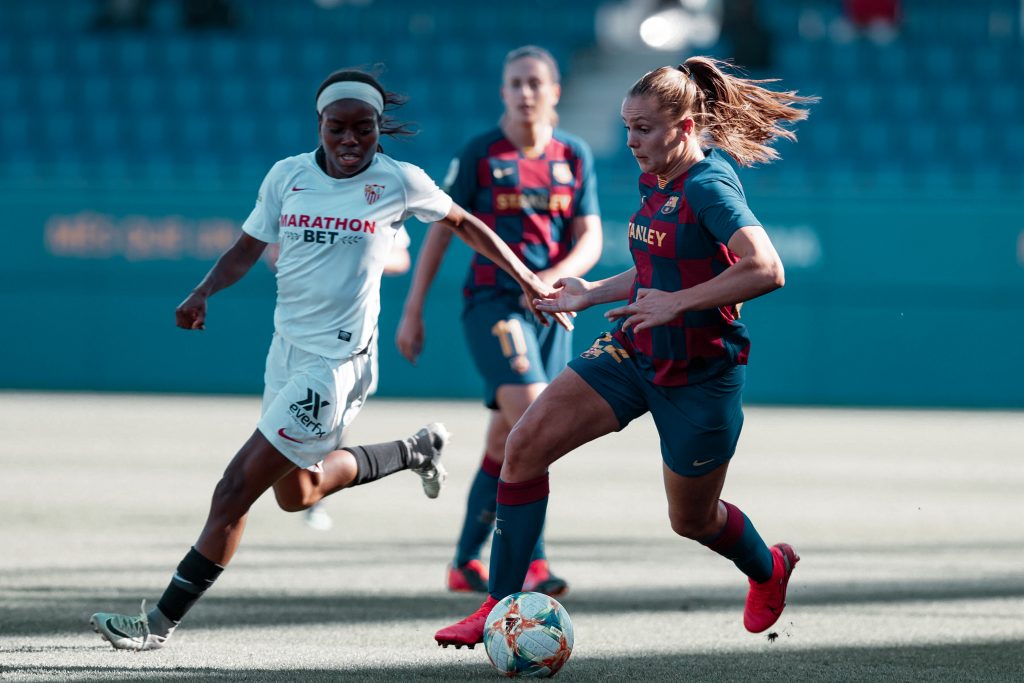 While Lieke Martens is many times seen as an overpublicised figure off the pitch, her contribution to FC Barcelona is actually undervalued.

Whether you follow women’s football or not, you have most likely come across the name Lieke Martens, one of the biggest female figures at FC Barcelona and the Netherlands national football team. Her claim to fame came three years ago when she became one of FCB Femení’s most highly-publicised signings as the team started to professionalise after a long period of domestic success.

The month after signing for Barça Femení, she was named the best player at the 2017 Women’s Euro for being a pivotal part of the Dutch side that won their first international trophy by defeating Denmark 4–2 in the final. Since officially joining the club, she earned the Best Women’s Player of the Year Award in 2017, helped Barcelona reach their first Champions League final, and was a major factor in the Netherlands reaching their first World Cup final last year.

Lieke has been at the forefront of all of her team’s accomplishments for the majority of her career, and yet she faces endless criticism regarding her productivity, output, and overall ability as a player. Some argue that Lieke Martens is an overrated player and that it is her marketability that makes her so highly-rated, but that couldn’t be farther from the truth. Lieke is a player whose skill, talent and success is considered first when she is rightfully and often deemed one of the best players in the world.

This constant criticism towards her is not something that started recently. Some of the best women’s footballers have had a hard time facing similar situations in the past. Lieke, specifically, is often given the label of “overrated”. This clearly isn’t true – she has accomplished enough in her career to prove otherwise. Aside from her team performances, she’s one of the best forwards on the planet who can score and assist and dribble and create chances better and more beautifully than almost anyone else.

Of course, any player thrust into the spotlight as abruptly and massively as Lieke was in 2017 is going to be subject to widespread criticism and be picked apart at every angle. However, in cases like her’s and Alex Morgan, for example, there’s a strange theme behind this criticism. Women in football who are more feminine presenting and highly marketed are taken less seriously.

Even in sports environments deemed more progressive than others, there’s still an aching tone of sexism that comes from overrated shouts that are so often directed towards conventionally attractive, feminine-presenting players. No matter how talented or how accomplished a player like Lieke may be, her ability will always be put into question because of the way she presents herself.

It plays into the pervasive idea that feminine women can’t be as talented or skilled at “masculine” activities unless they behave and dress in a masculine way. It perpetuates the same sexism that so many female footballers and fans speak out against daily. Instead of advocating for acceptance for all types of self-expression, some fans and players would rather make negative, belittling comments about how these players are trying to compensate for lack of talent by wearing makeup on the pitch or modeling for magazine covers.

These types of sentiments distract from the quality of so many players and instead focuses the conversation on their looks, the exact opposite of what needs to happen in women’s football.

Aside from the bouts of sexist comments that come from a lot of her critics, her role and her full career at Barcelona is often misunderstood as well. When Lieke arrived at Barca, she was a part of a small group of prolific players who knew signing up that they’d be a part of a major transitional phase at the club. The decision by the club to professionalize meant that they were going to focus on UWCL success equally or even more than domestic success.

Martens joined when many players were coming in and out, being moved around and being experimented with to see what stuck. At points, her support in front was below-par and at others she was injured or played out of position. It is worth asking what Lieke’s numbers would have been in terms of goal contribution if Jennifer Hermoso didn’t leave in 2017, or if Barcelona had better depth in forward positions. For her first two seasons, Barça weren’t nearly the same Barça they are today in terms of quality and stability.

Martens was an impactful signing for Barça Femení | Photo by Imago

Comparing Lieke’s productivity to that of the Norwegian international Carlione Graham Hansen from this season seems unfair too. Graham Hansen has better strikers and players around her with Jennifer Hermoso, Asisat Oshoala, and the full-back Marta Torrejón, who had her best season at the club to date. Particularly, Jenni and Asisat were the top scorers in Spanish Iberdrola this season.

Adding to this, Lieke partnered with left-back Leila, who isn’t much creative and supportive in the final third in the same way that Marta Torrejón is. Lieke didn’t have the chance to play more with the attack-minded Andrea Falcón as one of them was injured while the other was fit during this season. Despite all of these challenges and comparisons, Lieke has shined in many different team setups and positions, and her numbers at the club reflect that.

Martens has the best dribbling success rate ( 63% ) among players in all competitions including the Spanish top-flight, the UEFA Women’s Champions League, and the Copa de la Reina. She attempts 12.67 dribbles every 90 minutes and successfully completes 7.9 dribbles out of them according to FutFem stats. These numbers validate how good and important she is to this Barcelona side.

Lieke Martens is one of the most complete technical wingers in women’s football. Having Lieke in the team gives a tactical superiority in the final third. She stays wide on the left side pulling defenders out of position thus giving the much-needed width for Barca’s attack and she has the ability to drift inside and go for the goal.

Lieke loses possession only 12.9% in the final third and has one of the best recoveries in the opposite half at 4.47 every 90 minutes ( almost 76% success ) according to the Wyscout stats engine. Her successful crosses stand at 37.7% and long passes at 61%, which is good when considering she plays mostly in the attacking third of the pitch.

The most important factor among all these stats, is how they translate to her success in important matches. She was one of the key players in deciding the outcome against Bayern Munich in the Champions League return leg which Barça won 1–0. She was brought down in the penalty area giving the much-needed penalty to settle down the nerves in the dugout. Her playmaking skills and technical astuteness played an important role in Barcelona reaching the final of the UEFA Champions League for the first time.

Despite being injured for most of the 2019/20 season, Lieke Martens was only behind Alexia Putellas and Caroline Graham Hansen when it comes to the number of assists. She amassed a total of 2 goals and 8 assists in all competitions for Barcelona this season after only being at full strength for one or two months. She was getting better and better after each game until the COVID–19 break.

Specifically, her recent performance against Atlético de Madrid in the Spanish Super Cup semi-final is an example of what she has to offer when she’s linking up with her teammates in the right position at full strength. She still has time to deliver the goods in the UWCL knock-stages which restarts on August 21 and prove why she is the vital cog of this team.

Yes, Lieke Martens has her own clothing brand and she is the female face of most Barcelona advertisements and kit drops, but her marketing power shouldn’t take away from her performances and her ability as a player. These criticisms aren’t going to stop Lieke from performing at her best. With a much-improved front three, healthy legs, and better finishers in front of her, this coming UWCL campaign and domestic season are going to see the best version of Lieke Martens to date. If everything goes as expected, Lieke Martens is soon going to prove to her doubters and naysayers that she is still the best in business.