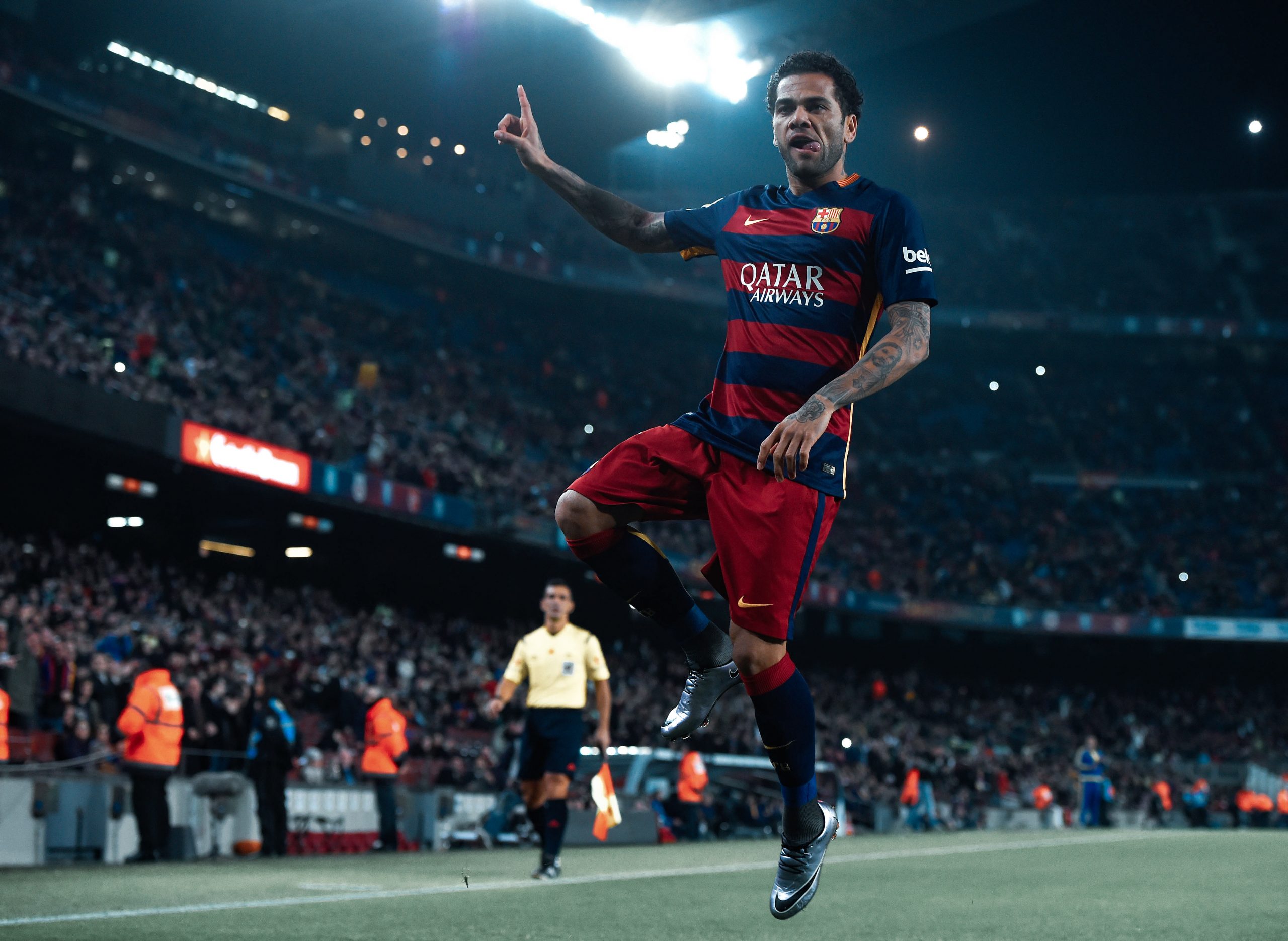 It’s been a week of reunions for Barcelona – welcomed ones, to be exact. First, Xavi Hernandez took over the managerial reins, bringing back with him nostalgia and new hope. Now, another legend comes home.

It was hard to believe, in the best way possible, of course, to see Barcelona announce the return of Dani Alves. It’s like hearing your favourite artist is releasing a new album or that your favourite movie is getting a sequel.

His departure in 2016 was tough to swallow, the team has failed to replace him ever since, and it felt like there was unfinished business. Now, it seems like the footballing gods are ready to finish that script.

The legacy lives on

Dani Alves first moved to Barcelona in the summer of 2008. His transfer fee of approximately €30 million made him the world’s third-most expensive defender at the time. He arrived at a Blaugrana side undergoing drastic changes, both with a new manager and a transformed squad. 13 years later, the now 38-year old returns to a similar situation.

Alves’ time at Barcelona was nothing short of sensational. From 2008 to 2016, he made 391 appearances, scored 21 goals and set up 101, and won 23 titles, notably two trebles and six La Ligas. He was a crucial piece to some of the most dominant teams in world football; the tale of Barcelona is incomplete without his inclusion.

Alongside talented midfielders like Xavi Hernandez, Andres Iniesta, or magisterial forwards like Lionel Messi and David Villa, Dani Alves was a force to be reckoned with on his own.

He had the flair and pace of a winger matched by a tenacious and energetic presence of a midfielder. He was a nightmare to defend and score against. Whether the explosive runs at the heart of the opposition, his pin-point crosses, his powerful tackles, or the 43 assists to Messi that created the most devastating right-hand side imaginable, one could list his highlights for days.

When it comes to the modern full-back, the Brazilian represents the summit everyone seeks to reach. His legacy is cemented as inarguably the greatest right-back of all time, but his story isn’t over yet.

When Dani Alves makes his first – actually 392nd – Blaugrana appearance in January (La Liga rules prevent him from playing until then), he will be the club’s oldest ever player at 38. Still, the dust has not settled on his career at the highest level.

When club legends leave Barcelona, it’s often for a more low-key environment, one that is in a relatively less-demanding situation. Think Xavi at Al Sadd or Iniesta with Vissel Kobe.

Not to disparage those choices, however, that was not the route Alves took when he departed Barcelona for Juventus in the summer of 2016. In fact, ever since 2016, he has been competing at the highest level, despite being in his middle-to-late thirties.

During his one season at Juventus, Alves made 33 appearances, finished with 13 goal contributions, won the Serie A and Italian Cup, and helped guide them to the Champions League final.

On the way to the final, Culés will remember Juventus eliminated Barcelona in the quarter-finals. He was flawless in both legs, coming up against an in-form Neymar who had spearheaded Barça’s comeback against PSG.

In some of the biggest matches of that season, Alves put up tremendous performances. He notched a goal and assist in the Champions League semi-finals, as well as scored the opener in the Italian Cup final.

Alves went on to join Paris Saint-Germain from 2017 to 2019. With the French giants, he won a further six trophies and tallied an impressive 25 goals plus assists in 73 matches.

In what felt like the final chapter of his career, Alves returned to Brazil, specifically Sao Paulo FC. While no longer in Europe’s big leagues, Alves triumphed with the Brazilian national team, showing he was still top of his game.

In the summer of 2019, at the age of 36, the legendary fullback helped Brazil to the Copa America title, winning Most Valuable Player along the way. Earlier this summer, he led Brazil to the Olympic Gold. Looking ahead, he has his eyes set on playing in next year’s World Cup.

While no longer in his prime, Alves’ footballing abilities have aged gracefully. He may have the body of an elder statesman, but the spirit of a youngster, and the silverware of an immortal.

What does he add to this Barcelona side?

Hopefully, Alves can have a substantial impact on the pitch. No one is expecting jaw-dropping performances day in and day out or double-digit assists, rather someone to offer much-needed depth across the backline and act as a surprise X-factor in attack as well.

Of course, Alves is known as a right-back, one of the most influential and most remarkable as we explored. Consequently, he will rotate between Sergiño Dest, Oscar Mingueza, and Sergi Roberto for game time.

Dest will remain the first choice, and rightly so. But the presence of Alves allows Roberto and Mingueza to be deployed in their preferred midfield and centre-back roles, respectively. With his arrival also comes less pressure on the youngsters in particular to perform.

In his last few years with Sao Paulo (and on occasion in Paris), Alves played the majority of his minutes as an attacking or central midfielder. With that in mind, he could offer Xavi another weapon in the middle of the park.

Additionally, if the new manager wants to experiment tactically, he could employ the Brazilian as an inverted full-back. Instead of providing width and staying on the wings, Alves would be instructed to tuck inside, acting as an extra midfielder, adding numerical superiority.

He may be 38, but he won’t be expected to play in the biggest of games, nor every single week. With his tactical profile, there’s plenty Alves can offer to the Catalans.

At this point in his career, the most valuable thing Alves will bring to Barcelona are his intangibles. It comes in his competitive spirit, his accountability, his leadership, and his experience. Arguably, all of this will impact more than anything he can do on the pitch.

If there’s one thing Barça have desperately needed over the last few years, it’s leadership and a will to win. This is especially the case with the young team they have become, filled with inexperience. Alves will be a rock and an example to follow, not only benefiting the players but also Xavi.

For the new manager, the Brazilian will help keep the locker-room (and pitch) in check. He will also be a constant source of morale and confidence – something to rejuvenate a squad that can easily lose focus and determination.

One can only imagine the invaluable lessons young full-backs like Sergiño Dest and Alejandro Balde will learn from Alves, not to mention the guidance he can give the entire team.

As journalist Sid Lowe put it, “I can’t possibly know how good Dani Alves is any more to be honest but one thing I will say is this: contrary to popular impression and lazy assumption, he is brilliant for a dressing room and supremely, supremely competitive and very serious about football.”

Martin Montoya, Douglas, Sergi Roberto, Nelson Semedo, Oscar Mingueza, Sergiño Dest. Ever since his departure in 2016, Barcelona have tried hopelessly to replace Dani Alves properly. Players have come and gone, but none have been able to fill that void. Perhaps, all they needed was Alves to teach his replacement.

The most decorated footballer of all time is back home. Time to win more.