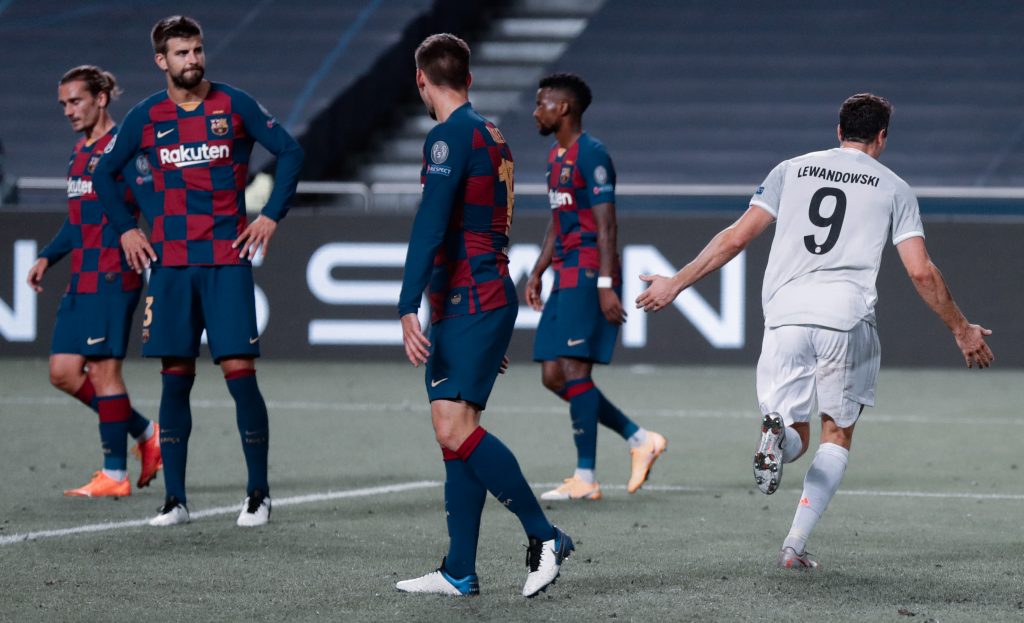 The debacle of Lisbon and humiliation against Bayern Munich has opened up many wounds, but the changes were long needed at Barça and it is about time such are implemented.

Everybody who had been predicting Barça smashing Bayern didn’t sleep on Friday night. What chaos it was. What misery those 90 minutes were. As somebody rightfully said, the longest 90 minutes in the history of Barcelona fans. It took only twenty-two minutes for Hansi Flick’s electrically charged Bayern Munich to take the game away from the fellow European giants. The energy of Lewandowski and Co. was on a whole different level. And their determination, well, made history ruthlessly.

Those empty eyes –– looking in the void knowing that the magic won’t come now. Yet, trying hard to get out of the denial, who else it would have been than the man whose sheer silence since Friday is breaking so many hearts: Lionel Messi. Gerard Piqué came up saying that embarrassment is the right word to define what happened in Lisbon. The scoreline, however, says humiliation fits best.

Many post-match analyses are commenting on the probable sacking of Quique Setién. However, does sacking him as an act of atonement would make any difference? The answer to this question is rather diplomatic, but somehow deep down everybody knows that, on paper, it seems very unlikely that a huge change in performance happens. Still, let’s see why he should be sacked and why others need to be gone with him.

What went wrong and why Setién should be sacked

The decisions the 61-year-old Barça manager has made in his last six months have raised many questions on his credibility and personality. The line-up on Friday already displeased many fans, and many already predicted that Bayern Munich would eat this team and not even burp. On the other hand, nobody thought that it would end at 2–8. Setién made a record, a record which will haunt the Spanish club and its fans for years to come. He managed it by playing a weak team with strangling tactics.

There are uncountable questions every frustrated fan wants to ask. Why did he not rely on Antoine Griezmann in the first place and brought him at half-time when the Barça defence had already been open and players were looking for a miracle? What made him think that Griezmann would bring a miracle at this stage? All culés were calling for the charm and young blood of Riqui Puig too. Why he was not included in any important game is a question one should ponder upon.

Ever since the Spanish coach’s arrival, his choice of late substitutions has raised many eyebrows as well. Everybody knows that Luis Suárez isn’t bringing much to the game and that he should be benched for some time, so why did the manager fail to do so? Is it because of the monopoly? If it is, then Quique Setien must leave and somebody who has a say over players should join. Someone who has the convincing power to make the squad go around his ideas which he miserably failed to do.

According to a realistic approach, the club and the board were expecting a drastic improvement from the newly-appointed coach in very little time. There wasn’t any room for a mistake and this alone made Quique make rushed mistakes repeatedly. He has been experimenting with tactics and line-ups ever since he came. Working under pressure during crunch time is one thing, but having this huge pressure on your shoulders that one single error will show you the doors outside is another form of mental stress and torture.

The Cantabrian has been reminded repeatedly that if he failed to bring the titles, he would be gone. This is exactly what happened. He failed and he will probably be gone very soon –– good riddance.

Will Setién’s sacking make any difference?

Setién’s imperfections were the reasons why the Catalans need a new coach. Unfortunately, what the club was lacking found missing in Setién and what he had to offer was already there. Nonetheless, the question is: will it be enough to save Lionel Messi’s last years at Barça and save the club from more disgrace? Possibly no. The problem isn’t the manager alone.

While it has been discussed a lot how the board is adding to the miseries of the club, it would be malicious to call for the Spanish giants to be left with the same president. To save the culés‘ sinking ship and see it sailing once again on old patterns, if not on the forms of Johan Cruyff then at least nearer to it, a complete rebuild from top to bottom is required. Otherwise, there will be another coach, another night and yet another firing in no time.

What needs to be done?

Friday night was full of ire for the blaugrana faithful. The fans, seemingly, are exasperated over the club’s long-term plans. Calls for Xavi Hernández to join the club and Víctor Font being the leading candidate for the presidential elections were all over the media. Nonetheless, nobody can help the club’s current predicament until and unless a drastic change from head to toes happens.

A president having integrity and trust of the members should take over to implement a think smarter approach. A manager having full faith from every single person of the club needs to come now. And the Argentine, he needs to be saved. This is about the time that the Catalans realise that the over-dependence on Lionel Messi won’t help them
anymore.

The unstoppable German champions rampage and everything that came along hurt like an open wound. But there’s one question which is taking the breaths away of the Messi loyalists: what is hidden behind this silence? What has he been thinking since last night? As frustrating as it sounds, the fans don’t want to think that again after another disgraceful defeat.