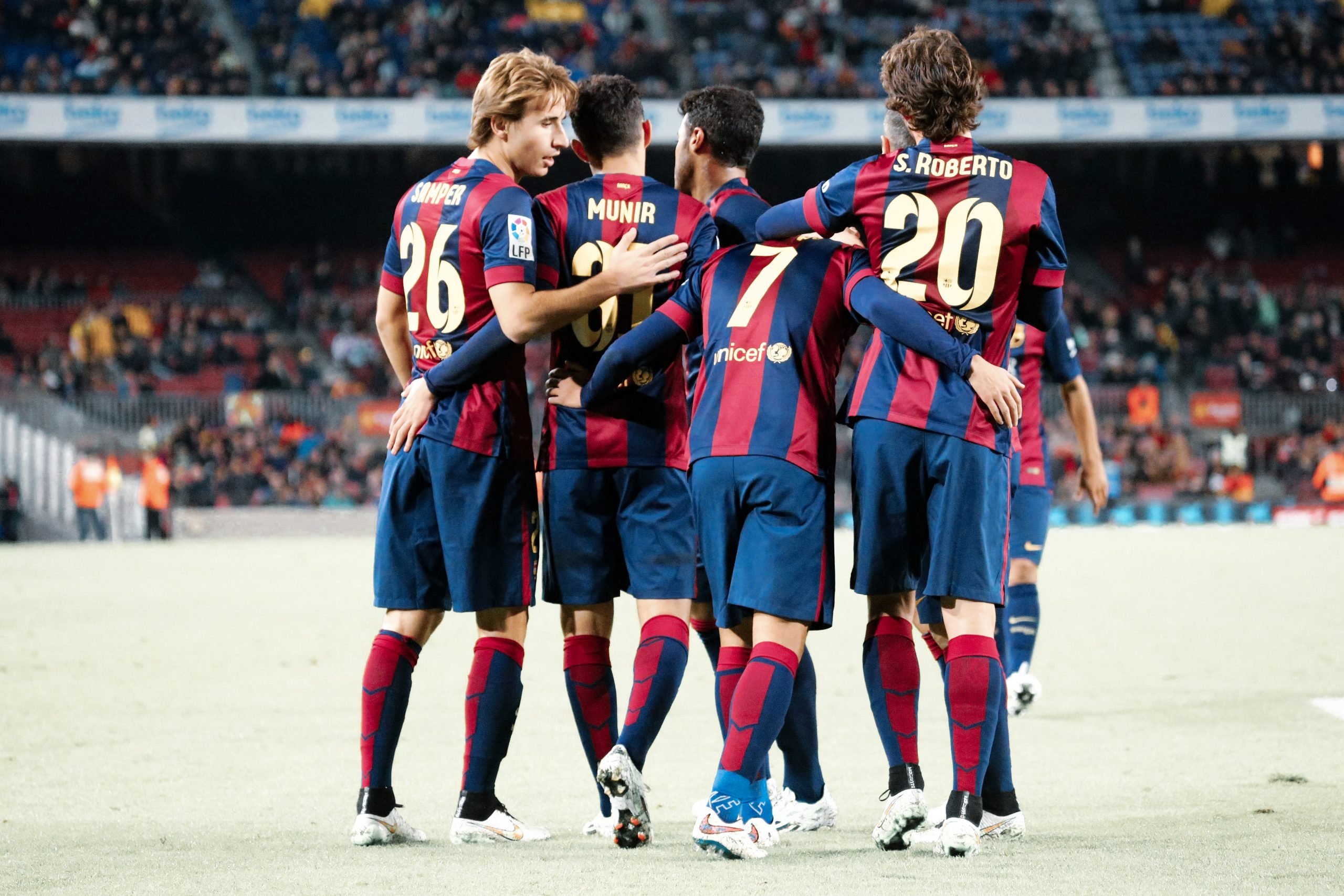 As Barcelona kicks off the new year, join us in our trip back in time as we reminisce the 8-1 victory over Huesca in the Copa Del Rey from the 2014/15 season in this episode of The Rewind.

While the 8-2 victory from the 2018/19 season is fresher within the minds of Barça’s supporters, the Catalans obtained an equally memorable result in the second leg of their last 32 Copa Del Rey tie. The Garnet and Blue had already ripped the Aragonés in stunning style away from home in the reverse fixture, a game that saw them win 4-0, and were looking to complete the demolition derby at home in a half-packed Camp Nou.

The second tier Azulgranas endured one of the worst halves to a game in their history, as their defence, porous as a sponge, conceded a “manita” by halftime. Pedro, filling in for Neymar in his favoured left-wing scored a first-half hat trick, as goals from Andres Iniesta, Adriano Correia, Adama Traoré, Sergi Roberto, Sandro Ramirez led Huesca to a damning 8-1 loss on away soil.

Despite the flabbergasting scoreline, Barcelona nearly found themselves on the back-foot early on in the game. As soon as the fifth minute, Chus Sosa played in a sumptuous cross from the touchline into Juan Esnaider’s path. The Spaniard directed the subsequent header towards Jordi Masip’s goal, however to his utter discontent, his effort bounced off the frame of the post and out for a goal-kick.

Having awoken the beast, Barça wreaked havoc on Huesca’s brittle defence, with Pedro opening the scoring. Munir el Haddadi beat his opponent’s offside trap with a perfectly timed run into the half-empty pitch. Once at the edge of the box, he played an outswinger with the outside of his left foot, finding Pedro in the 18-yard area, who scored the subsequent header.

He doubled his tally soon after, as following yet another botched attempt at keeping Barça at bay, the men in white let Pedro of the hook for a fraction of a second, and he punished them accordingly with a smashing effort past Dani Jiménez.

Deputising for Dani Alves, Martin Montoya played one of the Brazilian’s trademark crosses, finding Sergi Roberto right near the penalty spot. The La Masia graduate made the most delicate touch as his chipped effort proved too good a strike for the Huesca shot-stopper even to fathom touching.

Barça were fully in their stride as with a 7-0 aggregate lead, the tie was well and truly finished. With this in mind, they delicately carved Huesca open with pristine passing synonymous with the Barcelona of old. Come the end of the move, Roberto found Iniesta who, with the most fluid of controls for rid of his marker and subsequently tapped the ball past the advancing Jiménez and into the net to make it 4-0.

Barça’s job was just halfway complete, and Pedro added the icing to what was turning out to be a cake adorned with goals of all kinds. Pedro completed his hat trick with a goal almost identical to that of Mohamed Salah’s Puskas winning goal from 2018. It was the perfect strike to cap off what had been a perfect evening.

As the momentum was still on, Barcelona kept up the onslaught and ridiculed Huesca even further. Sandro unlocked their defence with the most delicate of through balls, finding Adriano positioned in the opposite flank. With the keeper completely out of his favoured position, the Brazilian took a strike from outside the penalty area, scoring splendidly to take the lead to a whopping ten on aggregate.

With 13 minutes left to play, substitute Adama Traoré, a man of much different physicality then, added further gloss to the scoreline. Just as he does now, he used his quick feet and instinctive reactions to skip post his markers till he ultimately found himself one on one with Dani Jiménez, who was truly helpless to stop the goal going in.

Towards the end of the tie, Javier Mascherano chipped the ball over the entirety of the Huesca backline, finding an on-rushing Sandro in the penalty box. With all the time in the world, he controlled the ball, picked his spot and let out a fierce strike past the keeper to finish the scoring for the Blaugrana.

Huesca got a consolation goal via a Carlos David header, however, it was worth next to nothing, as they were ruthlessly eliminated from the king’s cup by 12 goals to two.