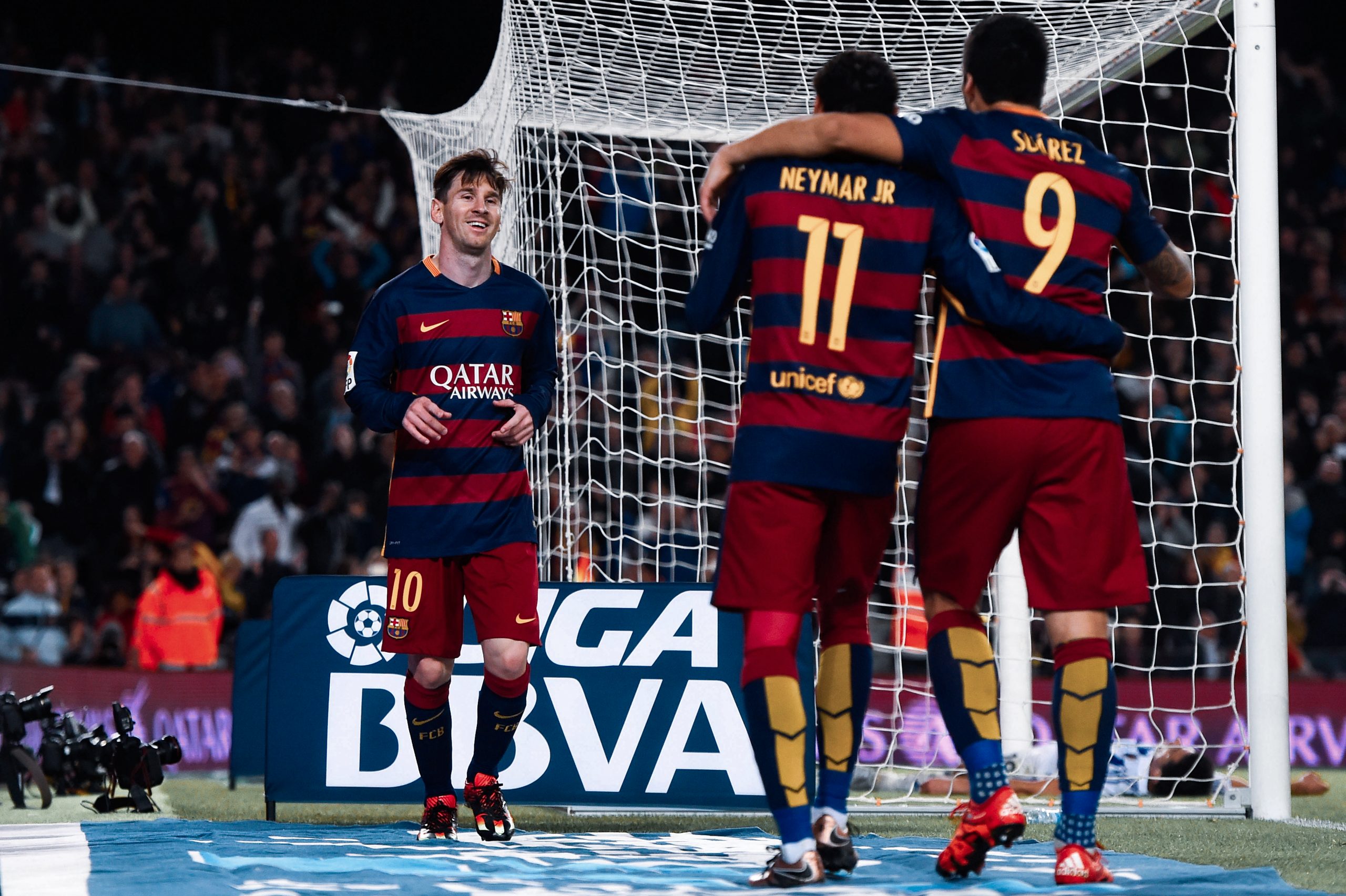 As Barcelona prepare to take on Imanol Alguacil’s Real Sociedad, join us as we reminisce the Catalans’ 4-0 win over La Real back from the 2015-16 season in this episode of The Rewind.

Having made a mockery out of their eternal rival in enemy territory just a week earlier, Barcelona locked horns with another one of La Liga’s royals in a clash the locals won by 4-0. In the three matches preceding this tie, the Blaugrana had scored 13 goals without reply to seal top spot in the Primera División, four points ahead of nearest challengers Atlético and six from Real Madrid.

This game marked Lionel Messi’s first start since sustaining an injury against Las Palmas that kept him out of action for the better part of two months. On his return to action in the Clásico, the Argentine set Suárez up for the fourth of the tie, and in this game, goals from the iconic trio of Messi himself, Neymar Jr and Luis Suárez were enough to bag the three points for the defending European champions.

In similar fashion to how they started the game against Real Madrid in the Bernabeu, Barcelona began the game on the front foot. Having lacerated the defence with a through ball, Neymar found Suárez’ forward run into the box. The Uruguayan attempted to divert the trajectory of the ball into the net, however, Geronimo Rulli was adequately positioned to salvage the situation for his side.

After a poetic sequence of passes that left Real Sociedad at sixes and sevens, Iván Rakitić’s pass met Suárez at the edge of the box. With the outside of his foot, he played a magnificent cross into Andres Iniesta’s path, however, his headed effort at goal struck the frame of the bar and was subsequently cleared.

In and of itself, the match was rather stale, as the visitors’ low block and congested defence worked as the antithesis to Barcelona’s proactive style of play. By merit, Barça deserved to get into the lead and halfway into the match, they did. Lionel Messi found his partner in crime Dani Alves as he made a darting run into the space left vacated by the Basque side’s defence. He then played a trademark cross into Neymar’s path, and he then followed up the pass with a ruthless strike into the back of the net.

Chances came few and far between, and to Barça’s advantage, they doubled their lead through a sumptuous volley from none other than Luis Suárez, or more colloquially, El Pistolero.

Having spotted yet another run from the Brazilian, Iniesta played a crossfield pass right towards Dani Alves. From the byline, given the nature of the pass, he chipped the ball into the box. Like a true number nine, Suárez sliced the ball right down the middle and such was the force behind the shot, that even the keeper’s quick reactions could do nothing to stop it going in.

If the first half was enthralling, then the second period was a far cry from the sort of entertainment the fans bore witness to, despite the two goals scored.

In spite of the fact Messi had neither a goal nor an assist, he had been heavily involved throughout the match, and his otherworldly vision was an absolute treat for the Barcelona faithful. His dexterity in this field was once again on show as he set up the Blaugranas’ third goal of the afternoon.

From the centre of La Real’s half, the Argentine lacerated the Txuri-Urdin‘s defence with a pinpoint pass to Jeremy Mathieu. Without hesitation, the Frenchman centred the ball towards Neymar in the penalty area, and the Brazilian finished off the move, hammering the ball into the back of the net to seal his brace and essentially, all three points for the Blaugrana.

Having already served as the architect for two of his side’s three goals, the then four-time Ballon D’Or winner had a go from barely inside the box, however, his audacious chip was a tad bit too high as he saw it crash onto the crossbar and erratically cleared by La Erreala’s defence.

His goal did come though, and the mastermind this time was man of the match Neymar Jr. On the right-wing, the Brazilian dragged Aritz Elustondo and subsequently did away with him with a cheeky piece of skill. He then played a quick one-two with Iniesta on the edge of the box. Having received the ball on the touchline, the Brazilian then laid the ball on a plate for Messi for an easy tap in.

Barcelona more than made amends for the defeat they had suffered at the start of the year, however to their dismay, the infamous “Anoeta Curse” rolled its ugly face once again.