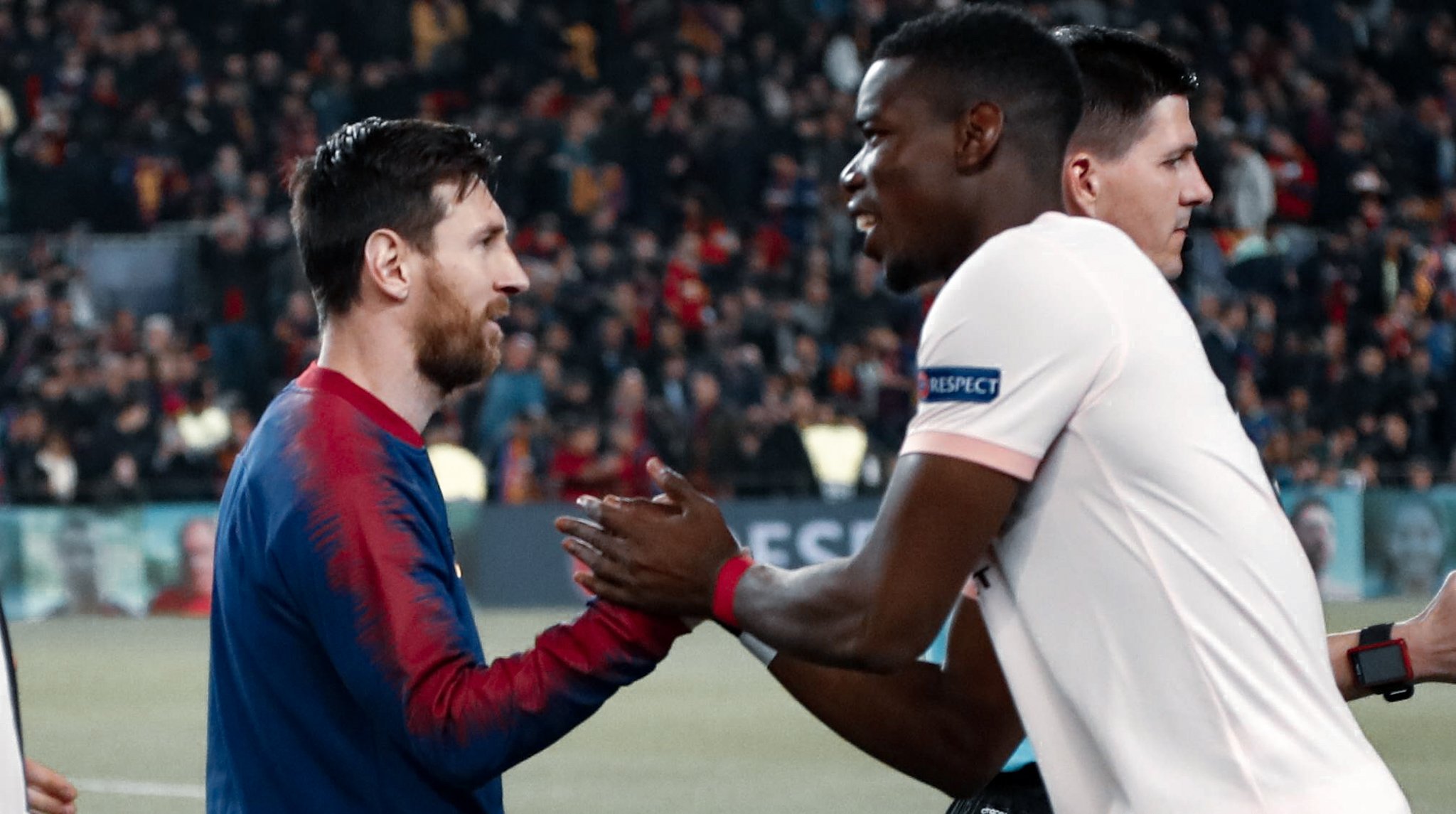 It was the biggest game in Manchester United’s season so far — a do or die in the Champions League. Facing a contest against RB Leipzig that could end up in a triumph or disaster, United’s manager projected a picture of unity inside the dressing room. Ole Gunnar Solskjaer said positive things in a press conference ahead of the game.

Solskjaer expressed his belief that the players will “show the reason” they deserve to be at the club, and how “the character of the group is getting better and better “.

But, Mino Raiola, it seems, didn’t get the memo. Uninvited, and arriving late to the party, Raiola changed the music and killed the mood.

“I can say that it’s over for Paul Pogba at Manchester United.”

He went further, “It’s pointless beating around the bush. Better to be straight up about it. Paul is unhappy at Manchester United. He isn’t performing as he’d like and as we expect. He has to move, he has to change scenery. He has a contract that expires in 18 months, in summer 2022. But I think the best thing for all parties is a sale.“

With a transfer nearly inevitable now, Barça Universal analyses the different aspects of bringing Paul Pogba to Camp Nou, and if Barcelona should go ahead with the deal in the first place.

Selling Pogba would free up around £15-18 million per year in wages for Manchester United. Juventus could be his preferred route, but for that to work out, he will practically have to half his salary to fit into the €9 million yearly wage cap they have in action. Moreover, if he is given an exemption like Cristiano Roanldo, it could take a huge toll on their finances.

The Pogba-Juventus saga seems far from over. (Photo by Marco Luzzani/Getty Images)

The destination in case for Pogba, however, is Barcelona, who, to be fair, are in an economical muddle of their own. As the situation stands, several players were let off for nothing, or for a lot less than their market value in an attempt to reduce the wage bill.

With Barcelona already in the next stage of Champions League, they have secured €8.5 million already. A quarter-final place in Champions League is worth €9.5 million, a semi-final spot a further €11 million. Teams also share a market pool of television rights worth an estimate of €263 million.

In short, going ahead in the Champions League is significant for the club’s revenue streams.

On top of that, if the Lionel Messi transfer comes to a close, the club likely digs itself a huge pit for more players. However, with the Presidential elections soon, that deal is stuck in quicksand as it stands.

The management and tactical angle

The 2020-21 campaign is the fifth season of “Unlocking Paul Pogba” show at Old Trafford — but it seems that it will not be renewed further after experiencing inconsistent TRP through the years. Juventus and PSG seem to be the frontrunners for his signature, but the rumours suggesting he is on his way to Spain have become difficult to ignore.

However, he tags along the burden of handling the rumours of Mino Raiola with him. The Italian player agent is one of the best in the business and prioritises his client’s needs above the club, and does not shy away from the media either. That said, if Joan Laporta becomes president of Barcelona, one can expect his good relationship with Raiola to be of help in an attempt to lure Pogba.

Mino Raiola is a headache, but has the best of clients. (Photo by Alexander Hassenstein/Getty Images)

While Pogba has flattered to deceive for much of his time in the Premier League, could a move to Blaugranas be the perfect remedy to revive what has become his fledgeling stardom? On the surface, it seems like he would fit quite well at the club.

After spending the last four seasons hearing analysts say Pogba was continually played out of position at United, he should finally be allowed to play in a role that suits him at Barcelona.

While Barcelona have fielded a 4-2-3-1 this season, which has not worked, for the most part, a change to a 4-3-3 is becoming largely inevitable, especially if Ronald Koeman is relieved off his duties soon.

This starting lineup is quite flexible, on paper at least. Jordi Alba will not be easily ousted from the left-back spot, although his form over the last two seasons has been dire at times.

The questions surrounding the midfield are rather interesting. Sergio Busquets will turn 33-years old next year, and displaying serious signs of decline over the past 2 seasons, he will likely see his playing time cut in the upcoming campaign. Moreover, Riqui Puig’s unwavering attitude and progress mean that he is likely to get a spot in the midfield triumvirate, albeit under a different manager.

That leaves the left midfield position open for Pogba, the same role where he thrived in for both Juventus and his national team France. At United, he has not been asked to play at his strengths — those being the ability to dictate play from deep, and start attacks from deep by carrying the ball.

When in possession, Barcelona’s fullbacks will provide much of the width in the team. Ansu Fati and Lionel Messi will drift infield to leave them plenty of space to operate, while Griezmann will drop slightly deeper to accommodate the inside forwards.

When the ball is on his side of the pitch, Pogba will drift out to offer support to the left-back, as shown in the graphic below. Frenkie de Jong will remain too deep to guard against the counter-attack, with the centre back pairing holding a high line. In periods of sustained possession, the Barcelona team will be laid out something like the graphic below. It is in such scenarios that Pogba could well thrive in the team.

Despite their poor form since last season, the Catalan giants still averaged the highest possession rate in La Liga. They attempted to pass around the opposition to death by continually shifting them out of position with short passing. With the addition of a player like Pogba, they could have a much more direct approach, which they are certainly lacking.

Barcelona averaged ten crosses per game last season, mostly through fullbacks. With the wingers drifting infield, the responsibility falls elsewhere to deliver the ball into the penalty area. Lionel Messi, did the lion’s share of the work, operating deeper than his position on paper. Further, we can see the weightage of Barcelona’s tracking zones and shot direction zones in the graphic below.

This clearly indicates that Barcelona tend to spray the ball from the centre of the field towards the run’s of fullbacks, mainly towards the left flank, meaning the midfielder is often the best positioned to do so.

The below graphic showcase the stats of Barcelona’s current season so far.  This makes up a good idea of how Barcelona plays through the middle third a lot having 43% weightage and 35% of the shots for the team comes outside of the box, with the lack of conversion rate lately. Pogba, with his decisive runs, could increase the 18 and 6-yard box activity rate and outside the box conversion rates through his trademark long-range efforts.

The Frenchman uses long passes to switch the play can also become a key tactic. This shits the defence out of position and provides more space to get those crosses in. Again, it was Messi who averaged the second-most long passes in the team — 62. And, leading the tally was, of-course, Jordi Alba with 79 crosses in. In the graphic below, we can see the Messi-Alba connection clearly in two different scenarios.

Pogba would certainly thrive in this role and take the load off Barcelona’s #10. If there is one thing he does well, it’s hitting raking passes across the pitch. Playing in that advanced role, much of Pogba’s responsibility on the ball would be to play two types of passes, those being the outer and inner passes covering the left flank with it as shown in the graphic below.

Just as Pogba did in Euros in 2016, which can be seen in the graphic below, he will also be asked to be available to play decisive passes and shoot from the edge of the penalty area.

For a player who, on average, took almost twice as many shots per game as any of his teammates in previous seasons, he should have no problem playing in a team that, currently is lacking its shooting boots altogether.

Multiple opportunities will be created for the World Cup winner, when the ball is on the right flank, to get into the penalty area and attack the ball. His athleticism and height make him a major threat in the air, and he has shown the ability to capitalize on such scenarios in the past.

Lately, we can see how Sergino Dest crosses into the box is looking for a poacher. If Pogba does make the move, you can expect to see him make decisive runs into the box getting on the end of the crosses.

Pogba can launch rockets with his right foot, and Barcelona should take advantage of it. (Photo by Pakawich Damrongkiattisak/Getty Images)

Of course, all of this is conjecture. Pogba may not move to Barcelona and chose his old club or even Los Blancos given the Zinedine Zidane connection. Looking at it from a tactical point of view, however, the Frenchman might provide some balance to this unbalanced Barcelona team.

For the first summer in a while, Barcelona would have a clear plan for their squad and ideas of how to improve it, with the election of the new president. They may be jogging at a snail’s pace as compared to the spirits of other big five European league clubs, but the current Blaugranas side is going through a lot, politically and bubbling along at a decent rate. That said, bringing Pogba to Barcelona should not be question of if it should be done, but how it should be done.