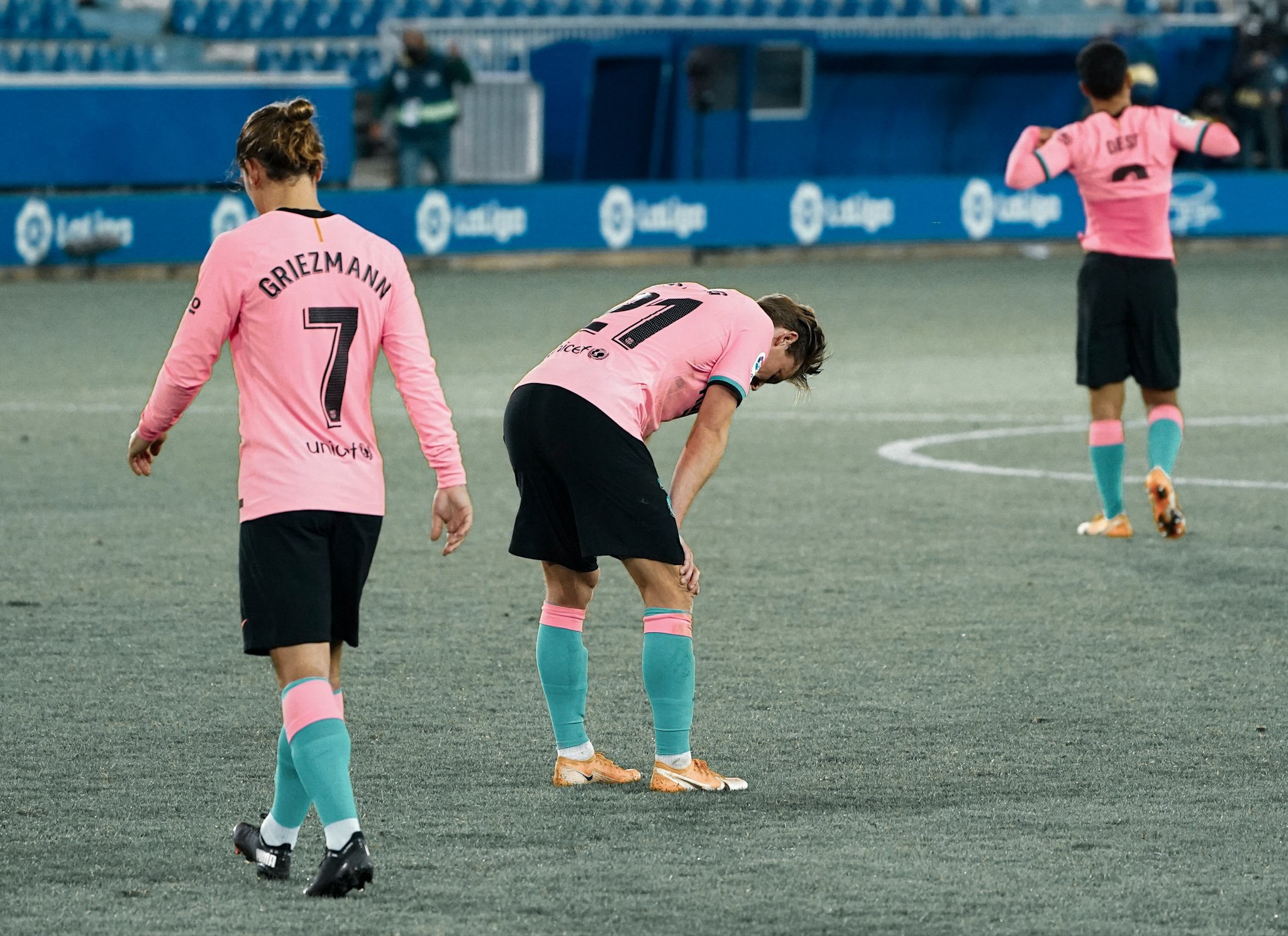 When it rains, it pours.

Following their weekend defeat to Atlético Madrid, Barcelona find themselves sitting 12th in the La Liga table and in the midst of their worst league start in 29 years. The match also saw mainstays Gerard Piqué and Sergi Roberto carted off with injuries, both of whom will be out for a few months.

Unfortunately for the Blaugrana, the problems don’t stop there. They are facing an institutional crisis, financial problems, plenty of media controversy, and poor performances. Nonetheless, there is a glimmer of hope as with each issue comes key takeaways and lessons to be learned from this club in disarray.

Barcelona currently find themselves in a state of limbo. On January 24th, the club is in line for new leadership that will hopefully steer the ship that’s been off-course for the past half-decade. In lieu of a private owner, Barça are run by a president and board who are elected every six years by official club members, called socios.

The most recent president, Josep Maria Bartomeu, oversaw a period filled with strife and controversy. Consequently, he resigned after a motion of no confidence was on the verge of ousting him and his board last month.

Bartomeu’s reign of terror was halted in between, but maybe little too late. (Photo via Imago)

In the meantime, an incumbent team led by Carles Tusquets is in charge; however, this just means that real change can not be implemented for at least another two months. It also means the new board will not have the month of January — the winter transfer window — to bring in any players they want.

Naturally, there are big questions about who will win the presidency. Some gravitate towards the exciting Victor Font whilst others prefer the tried and tested Joan Laporta, who was President during Barça’s peak years in the late 2000s to early 2010s. Interestingly, this deadlock could make way for a less-popular candidate like Jordi Farre to win.

It’s hard to isolate a key lesson from this institutional crisis, but at least fans can be reassured that an unsuccessful president and board can be properly removed by loyal fans. The successful motion of no confidence is a testament to Barcelona’s ownership structure, and the incoming board must provide stability and optimism for the future of the club.

One of the legacies of the aforementioned Bartomeu’s presidency was the financial hole it put the club in. The devastating effects of COVID-19 were exacerbated by a poor wage structure that resulted in salaries being nearly 80% of total club income.

Rakitic and Vidal leaving resolved a lot of financial issues at Barça, especially with the wage structure. (Photo via Imago)

The club has tried negotiating deals with players to limit the impacts, but finding solutions have been difficult. Barcelona now finds themselves facing bankruptcy, which affects all aspects of the club, including the livelihoods of employees, players, and even Barcelona’s attempts to buy new players to inject some new blood into the squad.

The financial situation is a clear warning sign for new leadership to make better decisions in terms of wage structuring and spending large transfer. Barça cannot afford to make anymore signings concerned with “flash over substance”. Once again, permanent changes can not be made until the end of January, so Barça will have to find temporary solutions, hopefully through the youth ranks.

In late August, Lionel Messi sent shockwaves across the world by announcing his desire to leave FC Barcelona. The decision was supported by most, except for President Bartomeu, who controversially decided not to accommodate the Argentine’s wishes.

There was hope that the story would simmer until next summer, but it is increasingly taking over the headlines and not going away anytime soon. It’s clear that the six-time Ballon d’Or winner is doing his best to prevent these issues from impacting him on the pitch, but even he is ultimately human.

Lionel Messi looks like a shadow of his former self right now. (Photo by Gonzalo Arroyo Moreno/Getty Images)

The idea of preventing a club icon from making his own decisions is still absurd and speaks to the many problems of the Bartomeu presidency. The transfer saga will stay with the club until Messi either re-signs or moves to another club and with that goes any semblance of tranquillity and order in the club.

Barcelona must learn from this mistake, and the new leadership that arrives in January must support whatever decision Messi makes. No club legend, let alone the greatest player of all time, deserves to be treated as such.

In addition to the Messi transfer saga, it feels like a new story undermining Barça players comes out every week. Naturally, every large club attracts media attention and controversy, but Barça players, in particular, have been put through the wringer. For example, just last week, Antoine Griezmann’s uncle came out with damaging remarks against Messi, but that is not an isolated incident.

Messi soon hit back at these statements, saying, “The truth is that I’m a little tired of always being the problem for everything at the club” after being swarmed with reporters post returning from International Duty.

No love lost between Messi and Griezmann? (Photo by GABRIEL BOUYS / AFP)

These issues are going nowhere, as is the nature of controversial and catchy headlines, but a takeaway here is the fortitude of the Barcelona players who deal with these issues with such grace and composure.

Initially, it was hard to get a grip on the identity of this Ronald Koeman-led Barça team. Were poor performances merely a result of a mismatched squad needing time to gel, or was it a sign that this team was never going to find their footing? Unfortunately, the latter seems to be true.

The results speak for themselves, but this squad is clearly lacking character and unity, and watching them often feels like watching 11 individuals running around a field instead of one cohesive unit. To add, their weaknesses are easy to read and effortlessly exploited by opponents.

The only takeaway is that it’s clearly time for a change. The upcoming match against Dynamo Kyiv feels like the perfect opportunity for the team to try out something new; perhaps a different formation overlooked players and a fresh tactical approach.

It is also the time for individuals like Antoine Griezmann and Clement Lenglet to prove that they can lead the team in absence of team leaders Messi and Pique. The question is, will there be any changes, or will Barça continue to perform the way that’s gotten them sitting 12th in the table?

Adding to the laundry list of Barça’s enigmas is the injury crisis they have on their hands. Defenders Piqué and Roberto are out for a few months, but the Blaugrana don’t have many backup options. Ronald Araújo and Samuel Umtiti are both injured as well, and the latter has yet to earn trust from Koeman. Frenkie De Jong looks set to fill in at centre back for the next few games, but that leaves more questions about who will play in the double pivot.

For tomorrow, however, everything indicates towards an official debut for Oscar Mingueza, who is the only other centre-back in the travelling squad apart from Clement Lenglet.

Gerard Pique’s injury is a massive blow to the team. (Photo via Imago)

Injuries come out of nowhere, and a team can never fully be prepared, but there is a clear lesson here for the Catalans in terms of squad building. In the future, Barça should have a more well-rounded squad in case things like this do happen.

Fans and followers alike will hope that this rough patch is merely momentary, but it could very well last the entire season, or at least until new leadership is brought into the fray at the beginning of 2021. Nevertheless, given the severity of these issues, patience is paramount. Things may feel like they’re getting worse, but in every problem the club is facing, there are key lessons they must learn from so they can be better in the future.

Although things are looking grim, the darkest hour is just before the dawn.