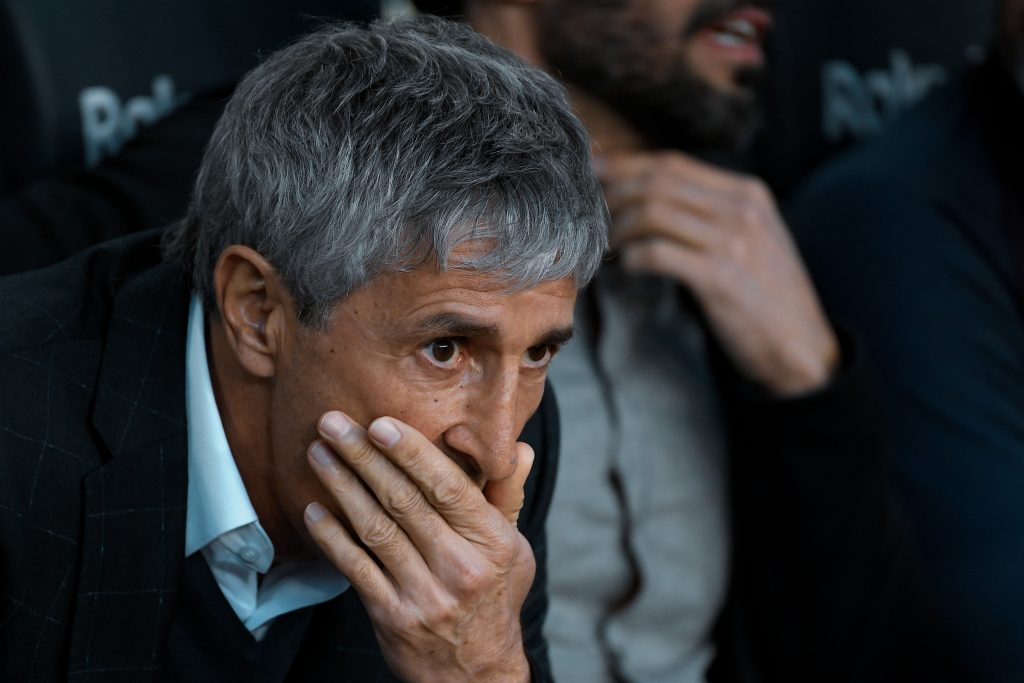 The Barça dressing room has been too powerful and difficult to deal with, as it has ended up exposing a certain lack of personality from Quique Setién in choosing the veterans over the deserving youngsters in Ansu Fati and Riqui Puig.

In his first pre-match press conference as Barcelona manager, Quique Setién admitted that some players are “higher up in the hierarchy because of what they have been proving”. Perhaps that would prove to be the statement which would ring truest of those he made, in a world where there was still room for optimism at the Ciutat Esportiva. “Everyone will have opportunities”, Setién promised. Mixed in amongst his own wide-eyed enthusiasm was a nod towards La Masía, an ever-present point of contention under Valverde. A manager turned pantomime villain on social media, his successor would send the Riqui Puig hype train into a frenzy in Setién’s first game against Granada, substituting the youngster on for the final stages of the match.

“This club has an extraordinary academy. From the bottom up, if they are given a chance it’s because they deserve it. I absolutely have a willingness to take care of the kids because they bring positive energy and, aside from that, they make sure those above them don’t get too comfortable”

Yet it would be a global pandemic later before Puig saw any meaningful minutes again. When he finally got them, he was brilliant. Constantly in motion, his vision and navigation of space gave a boring midfield access to a different dimension. Even when faced with Simeone’s Atlético de Madrid, one of the meaner defences in Europe, he was a constant headache for Saúl Ñíguez and Thomas Partey –– a partnership 587 games his senior.

So when Barcelona finally stumbled their way to the end of the La Liga season, Riqui Puig and Ansu Fati were the solitary rays of light amongst a gloomy atmosphere, the most pessimistic years. Their cameos in a team that so often played without imagination were an injection of life. A glimpse, a reminder, of what it should look like.

“In my previous teams, I have always said the same message to the kids and followed it up: if you have earnt it, you can play in the first team and be another member of the squad”

With Sergio Busquets and Arturo Vidal absent through suspension, it appeared not just a Twitter fantasy but a logical solution that Puig would start against Napoli in the second leg of the Champions League last 16. Antoine Griezmann was recovering from a muscle injury, and with both him and Luis Suárez yet to recover much form, it seemed almost unthinkable that neither Puig nor Fati would start. The stars had aligned in the stands, centre stage was for the youngsters.

Yet they saw not even a minute. Consigned to the bench while Barça B captain Monchu Rodríguez made his debut and Barcelona clung on to a two-goal lead. Not a single second of the game they missed the B-team play-off for, of the match they had earned. Frenkie de Jong, Sergi Roberto and Iván Rakitić played with Griezmann ahead as a mediapunta, behind Suárez and Lionel Messi. A first for the Frenchman, the performance was equally novice. Once again, his attacking output so scarce that people praised the star forward’s defensive efforts.

Riqui Puig didn’t get his debut in the Champions League, and Ansu Fati was subbed on against Bayern were the humiliation was already confirmed | Photo by Lluís Gené / AFP via Getty Images

Of course there is a certain logic to playing the big names. However much Bartomeu and associates have inflated their wages, their reputations were earned on the pitch. Experience does count. For all of Barcelona’s flaws, technical quality is not one of them; the usual scapegoats for the team’s wider failings –– Rakitić, Griezmann, Suárez –– have all proven themselves over their careers. Each has at one point or another had a reasonable claim to being the best in the world at their position. The former two were
crucial parts of their world-cup-finalist sides.

But it’s starting to feel like a long time since these reputations were reinforced by our eyes rather than our memories. Poor form stretching so far it feels increasingly like decline. When Barcelona last beat a top-level side, it was a far from vintage Atlético de Madrid, with a far from vintage performance. Before that, a forgotten 3–0 victory over Liverpool. Now fifteen months behind us.

In stark contrast, Ansu Fati and Riqui Puig have defied their inexperience at almost every opportunity. It is hard to argue that Barcelona have not looked visibly better, visibly more like Barcelona, with them in the side. Only Suárez and Messi have scored or assisted more regularly than Ansu. He would play just twenty meaningless minutes against Bayern, while Puig never even got on the pitch.

At the beginning Quique Setién affirmed that the opportunities given to youngsters will “ensure that those ahead of them don’t relax”. The degree to which he foreshadowed his own frailties, betrayed his own supposed dogmatism, is fitting of the tragedy Barça find themselves living in. Sour-faced on the touchline, he became a hostage to Valverde’s line-up.

And the canteranos must be amongst the most disenchanted by recent events. For all the reverence they may have for their heroes, they are not naïve enough to ignore such a clear gap in performance. Regardless of how it hurts the side on the pitch, no manager can hope to maintain the respect of their employees when displaying such deliberate prejudice.

Beyond a humiliation against Bayern or scraping past other teams, the consequences are more poisonous. This habit of trusting the older players come what may goes against basic human psychology. The natural paradigm dictates that good performance is rewarded with more opportunities, without which performing well loses all meaning.

“We are not good enough to control the whole match”, remarked Setién after the Napoli victory. Yet that was exactly what he did while at Betis and Las Palmas. Symbolic of a discourse that has appeared increasingly separated from reality with every passing match. He sold his beliefs in order to wander amongst the so-called Vacas Sagradas –– the dressing room heavyweights. Their competitiveness on the pitch cannot be doubted, as it has probably prevented Barcelona from falling far earlier.

Without the threat of losing their place, though, the incentive to compete in training is just as absent as the one to perform. The outcome is not just demotivated, sellable youngsters, but an unavoidable slide in standards. Regardless of how much they strain and struggle on matchday, even talent is powerless to resist the effects of mental rust. The disregard for the day-to-day work is at the heart the poor performances and
the simple mistakes.

A team’s edge is sharpened every day in training and Barça look like they are permanently in preseason. It is hardly surprising that the answers are nowhere to be found on matchdays when there are no questions asked the rest of the week. For so long Barcelona have had the key in Messi. Stuck in a maze of blind alleys, with no help from others, not even he can find the door now.

Until this culture changes, the azulgranas are doomed to wither and die a never-ending death with their ageing side. Quique Setién’s meek submission to the sacred cows in Barcelona is the source of his imminent reunion with the cows in his native Cantabria. Sport is the ultimate meritocracy, no matter your background, those deserving are rewarded. Barça, meanwhile, has become an aristocrat’s paradise. The rich are untouchable, unassailable for the rest of the squad, regardless of whether they deserve it or not.