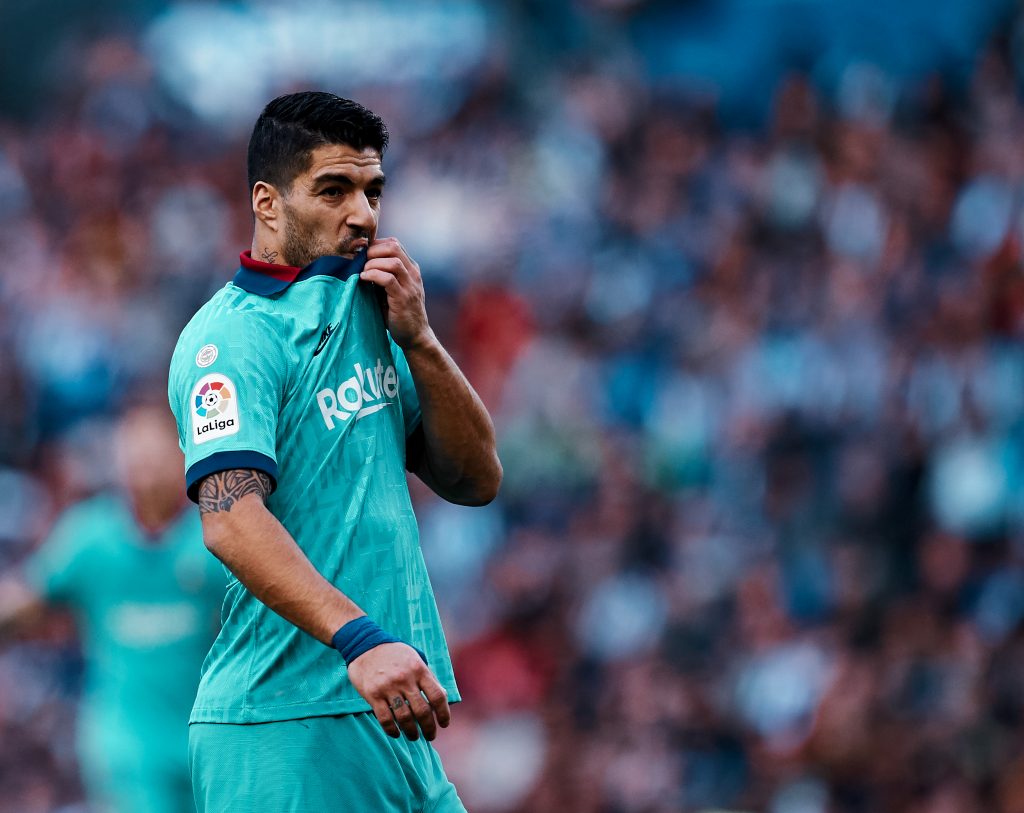 The game of Barcelona striker Luis Suárez hasn’t been good enough for some time, and his decline seems obvious. Let’s delve into what’s wrong for the Uruguayan.

Being a striker is the easiest yet the most demanding job in the world. This type of players needs to have many physical attributes, like blistering pace, outstanding jumping reach or fantastic dribbling. However, they are always the focal point of teams, fed through relentlessly by their teammates, and they get most of the recognition for their team’s successes.

At Barcelona, the strikers should be mobile, smart and lethal in front of goal, primarily when the play is so much focused on a striker’s ability. The strikers that have worked in the culés‘ system have fit like a glove because they all possessed the attributes needed to play in such a demanding system. The likes of Samuel Eto’o, Lionel Messi or Luis Suárez have all played centrally at some point for Barça, and have all tasted success as the focal point of the squad in their illustrious careers.

Luis Suárez was one of the best strikers ever to stick the ball in the back of the net for the Catalans, with his clinical finishing, intelligent movement and some mesmerising dribbling. The Uruguayan striker from 2015 was one of the best, and the foraminous fee the blaugranas spent on him proved judicious. That striker scored left, right and centre for Barça, in the league, the Cup and the Champions League, with some iconic moments like scoring the winning goal in El Clásico, nutmegging David Luiz against Paris Saint-Germain, making Medhi Benatia spin in a European semi-final, or scoring four and assisting three against Deportivo de la Coruña, winning the Pichichi award in the process.

From 2015 to 2018, nothing could stop Suárez, and his numbers didn’t really take a hit after that. Of course, he got 21 goals in the 2018/19 term and currently is Barcelona’s second top scorer in the league having missed two to three months of the season. These stats are impressive enough to think that, even at 33, Suárez is still one of the best strikers in the world. But Suárez is not the same, and he will never be the same again.

It seems like he has lost most of what made him special in the past: his movement, his footballing skills and his finishing. Against Atlético de Madrid on Tuesday, his game was disappointing, not to say abysmal. A far cry from his 2015 days, Luis had one shot on goal, lost possession eight times and did no create anything. His movement was also below-par for any centre-forward, not even a world-class one.

Luis Suárez seems to have lost his sharpness, his ruthlessness, his fitness | Photo by David Ramos via Getty Images

When Suárez ever played in 2015, defences hated facing a pace demon who was clinical and terrorised them to death. When he plays now, though, it is like seeing the shadow of the old Uruguayan killer. No movement, no dribbles, no nothing. Against Atleti, he showed nothing. He did nothing. It was sad to see this decline. What was more disturbing was that Quique Setién kept him on the pitch for the full game.

Now, his league numbers have been decent enough, but his Champions League stats have been extremely poor. As a starter for Barça, the former Liverpool star scored one goal in the 2018/19 Champions League, not deserving his place in the team whatsoever. This season he was decent enough in the early stages. Scoring a screamer against Inter Milan and another goal against Borussia Dortmund made it look like he had found his mojo back. But generally, his contributions have only lied in his goals, adding little more outside them.

His primary purpose should be to drag the defence away and create space for others, just like he used to do. But lately Suárez has done nothing to bother the opposition backlines whatsoever. This has been the story in recent matches, and even his performance against Celta de Vigo wasn’t good enough. While his two goals were splendid, there was no movement again. When he did some proper off-ball movement, he scored the second goal of the game, but then still nothing else.

“Often I’m hard on myself for not doing things well. Not just when not scoring goals, I hate doing things which damage the team, like losing possession of the ball in a way I’d never normally do. When that happens, it’s what worries me the most. Also when I make bad decisions, the kind of mistake that when you’re confident, you don’t make”

Suárez’s decline is sad, and arguably he doesn’t deserve to be a starter for Barcelona right now. He isn’t playing like a number 9 who has earned his chances, especially when he does not contribute to crunch times and essential fixtures. The current Barcelona attack is toothless and will always be toothless when two players are passive in defensive phases and when one still doesn’t move in offensive stages.

Suárez walks for the large majority of the game, and the pressing this team does gets cancelled out by the little work from the two main stars upfront. One is Lionel Messi, the greatest, and his offensive outcome is not negligible. But Suárez’s numbers and attacking performances are not good enough to warrant him walking, and it is clear he cannot sustain running like a madman anymore.

The Uruguayan’s decline in recent years is tragic for all parties. The fans hate it, the club suffers from it, and the player just keeps receiving criticism after nearly every clash. Luis Suárez’s legacy should not be tarnished this way, and possibly he shouldn’t be a regular starter for Barcelona anymore.

• Iván Rakitić: Why is he always so valued by managers?