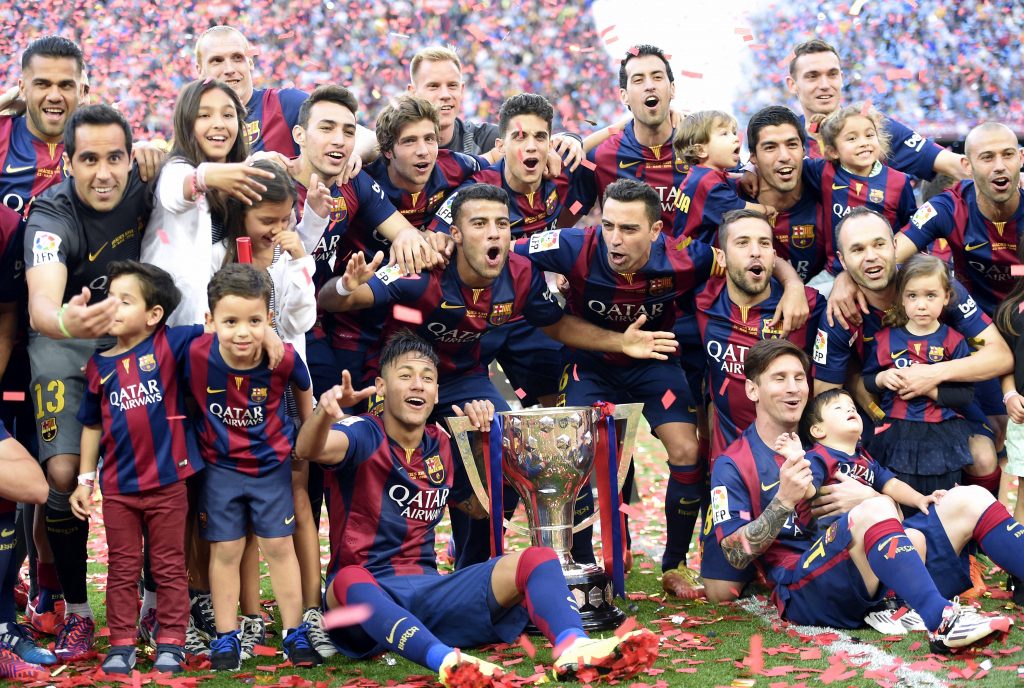 The 2014/15 season was one to remember for Barcelona. The blaugranas became the only European club in modern history to win two trebles, as Luis Enrique’s team combined individual magic with collective brilliance.

The 2014/15 season, a season where haters became fans, where everything that could go right, went right. A season built on individual genius, tactical masterclasses and clutch moments. The 14/15 Barcelona side was the last side to win a Treble, a feat accomplished only 6 times in modern football. Given the current absence of football, and the uninspiring state of today’s Barcelona, let’s take a look back at happier times.

The greatest attacking trio of all time. Period. The 14/15 season was the birth of a terrifying attack, of the most terrifying attack. The crux of the season; the success of the 14/15 season was largely based on MSN doing things never done before in football. They didn’t just raise the bar, they launched it deep into outer space. When one of the players wasn’t feeling it, the other two took charge, if two of them weren’t feeling it, one of them took the mantle on themselves, and if all three of them were feeling it, well, the game was over before it ever started.

Charisma. Brilliance. Magic. In spite of this being the first season where all three of them were playing together, the understanding they shared was telepathic, it was not normal. It was like the three of them were in a completely different dimension, where they could communicate in a supernatural way.

Extraordinary numbers. Extraterrestrial numbers. The three of them scored a combined 122 goals in the season. Such statistics were unheard of. The most impressive fact was that the goals were in the games that mattered. Neymar made history in becoming the first, and only person to date, to score in every single game of the Champions League knock-out stages. Messi and Neymar ended the season as the top scorers in the Champions League, with each of them netting an impressive 10 goals in the European competition.

Suárez and Neymar both scored in the Champions League final versus Juventus, with Messi dropping a clinical performance as a playmaker. That campaign wasn’t short of individual awards either, with Leo picking up his record (no longer) 5th Ballon d’Or on the back of the season, and he was also named as the UEFA Player of the Year, with Luis Suárez finishing in the top 3. Another impressive feat was a 23-year-old Neymar Jr placing third in the Ballon d’Or ranking.

The midfield is the heart of a team, and Iniesta was the heart of the midfield. It was Barcelona’s first season without Xavi as a starting midfield, and even without Xavi, Iniesta delivered. A magician, a natural talent. Bar Messi, the best dribbler in the world, nobody could move the ball like Don Andrés. It was so easy for him. Running rings around some of the best midfielders in the world, singlehandedly winning games, making unfathomable passes and runs, it was all too easy for Iniesta.

More than anything, Iniesta turned up for all the big games in 2014/15, and his Man of the Match winning performance against Juventus in the Champions League final is one for the history books, an absolute and instant classic.

Things are different now, they don’t make them like Iniesta anymore. The first of his kind, and the last of his kind.

Iván Rakitić is a name that stirs up a lot of angry emotions in the hearts of many culés. Many have grown to loathe him. While the criticism he gets is valid, the hate is beyond unnecessary. However, Rakitć’s reputation wasn’t always so low.

In Xavi’s last season at Barcelona, Iván Rakitić had to take up the responsibilities of completing the midfield trio alongside Busquets and Iniesta

Rakitić in 2014/15 was a different beast. As a matter of fact, it can be argued that he took up Xavi’s role better than anyone could have. Many times in the season, the team didn’t even miss Xavi. The Croatian was great defensively, made line-breaking passes, had unparalleled stamina, assisted Messi’s iconic goal versus Boateng, and also opened the scoring in the Champions League final.

Rakitić did everything he was told to do, and he did it brilliantly.

The 14/15 season had a bumpy start. Coming off the trophyless 13/14 season where rivals Real Madrid won the Champions League, the morale in the dressing room wasn’t really high. The newly signed Luis Suárez was banned from playing due to his biting incident in the 2014 World Cup. The scariest part, however, was the Messi sega. Messi didn’t get along with Luis Enrique, every day there were absurd reports in the Spanish press, but things really got crazy when Messi started following Chelsea FC on Instagram, and rumours of the Argentinian leaving Catalunya started surfacing, and it seemed like these rumors had basis. Messi and his father’s ongoing tax case in Spain also seemed to be a reason behind the maestro’s potential exit.

As a matter of fact, it was revealed later on that Xavi managed to stop Messi from leaving. Just try to imagine how things would be today if Messi left Barcelona back in 2014. It just doesn’t seem right, and even the thought of it is disturbing.

The start of the season wasn’t great either, the results were inconsistent and Barcelona’s 3–1 loss to Real Madrid in El Clásico hurt the team’s spirit. So how did the season end with such unprecedented success?

They persisted through everything, the results, the drama, everything. Everything slowly became about football and only football. The team started connecting, Suárez was back, Xavi and Pedro were coming in to finish games as substitutes, everything was getting better. It got better to a point where the Barcelona team was this monumental spinning wheel that simply couldn’t be stopped. The teams the blaugranas faced didn’t lack quality. The 14/15 RO16 was versus Manchester City, the reigning Premier League champions, the quarter-finals were versus PSG, the reigning French champions, the semi-finals were versus Bayern Munich, the reigning Bundesliga champions and the final was versus Juventus, the reigning Serie A champions. Barcelona wasn’t the clear cut favorite in any of the games. As a matter of fact, Barcelona were heavy underdogs versus Guardiola’s Bayern. But Barcelona triumphed, how? Because for that team, losing wasn’t an option.

After the 2014/15 season, probably nobody could have predicted Barcelona’s horrifying nights in Rome and at Anfield. Everything that could have gone wrong, went wrong. The quality remained. Messi, Suárez, Coutinho, Dembélé, all extraordinary players, and a squad consisting of them should be head and shoulders above the rest, and quality-wise it was. However, the mentality was lacking. Jordi Alba was in tears at half-time, versus Liverpool when the game wasn’t even lost. Coutinho looked like he was battling depression. Dembélé was regularly injured, and Suárez put up way too many bounds.

All of the responsibility lay on the same man, every time: Lionel Messi. To the point where it got too much.

Football works in funny ways, numbers, probabilities, odds, all go out of the window when it comes to the game. Things can change in an instant, players come, players go, managers come, managers go. Sometimes the players are in the mood, sometimes they are not. No one can predict what happens in football. Barcelona’s current side is uninspiring. It’s tedious to watch. People long for the games to finish. It didn’t use to be like this, not back in 14/15 at least. The immediate future of the team and the results are uncertain. But what is certain is that one day, someday, Barcelona will be back.

Barça: a decade shaping football
What did you think of this article?