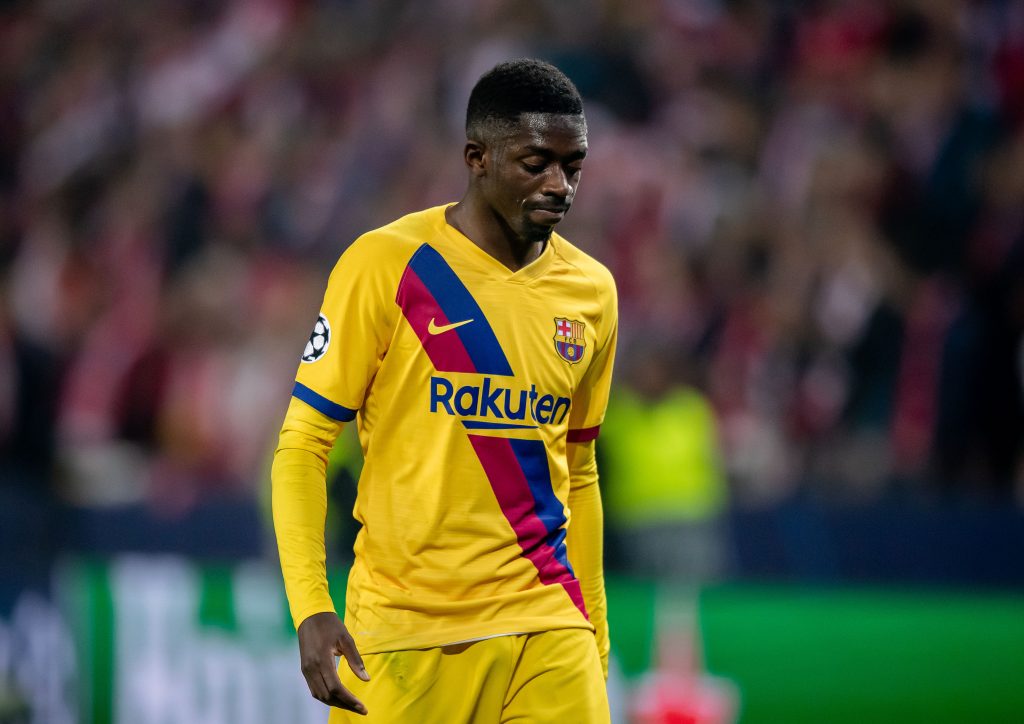 Ousmane has got injured 9 times wearing the Blaugrana shirt, missing 49 games out of the 137 that Barcelona has played since his arrival to the Camp Nou. Many problems and little patience with Dembélé, who, with his physical problems, puts something very valuable at risk: his future.

The last game FC Barcelona played in the Champions League against Borussia Dortmund was one in which all culés were nervous because the ticket to the knockout stages of the most important European club tournament was at stake. The first half ended with a perfect result for Barcelona, ​​2–0 and with good feelings to score more goals for a Borussia sides that continued to make unforgivable mistakes. Despite the ideal scoreline, it wasn’t all good news, because, in the 26th minute, Ousmane Dembélé suffered his ninth injury wearing the Azulgrana shirt. According to the club’s doctors, the 22-year-old will miss at least 10 weeks and, if everything goes well, he would return in mid-February. But this injury is different. More than an important absence for the team, it is a decisive point for the future of Dembélé.

To discuss his future, let’s first take a look at the past of Ousmane Dembélé. Before FC Barcelona, ​​the French international played for Stade Rennais and Borussia Dortmund. In his beginnings as a professional footballer, at Rennais, he didn’t miss a single match due to injury and he was able to play the last 26 Ligue 1 games in a row. In Germany, he had a couple of very minor injuries, being absent for only 1 match of the 34 Bundesliga fixtures with fitness-related issues. A player who was very healthy in his physical appearance – it was rare to see him injured. His romance with injuries began when he arrived to Spain, and they ​​preventing him from reaching his true potential and stopped the growth of the youngster.

“Dembélé is affected by the situation. He is upset. I don’t know if his injury is in the same location as the other times. He was training fine. We will take care of him.”

Currently, Dembélé has missed 49 of the 137 games that his actual club has played, and, if we include all the clashes that he’ll lose from here until he recovers, that will add up to approximately 60 matches in total. Abysmal. At this point, looking for a guilty would be a waste of time. We don’t have enough information about his therapies, routines or habits, and it would be disrespectful to blame the medical staff, the board or the player himself without knowing what’s behind all this. Now, what will happen to Ousmane? Will he be sold? Will he leave on loan? The future of Dembélé is a great mystery with injuries that not even Sherlock Holmes would be able solve. However, with all the background, we could predict some possible scenarios:

I. Dembélé stays for one more season

For me the best and most likely scenario, and the one every Dembélé fan wants to see. One more chance for the young Frenchman who came here to make his mark in this club, but who has been stuck in his own potential. The explosive winger, after recovering from his injury, will arrive on time for the UCL qualifying stages. Not only that, but when coming back he’ll also encounter a tough schedule, probably with Barça fighting very tightly for La Liga, and a plan that may not include Dembélé. Ideally, at the end of the campaign he will have adapted to the system and competition again and will have prevented costs any type of injury, gradually recovering his level and preparing for the next season. New year, new beginning. The past would have been forgotten. That’s when Dembele would exploit his entire quality and progressively become what people like me know he can become. Happy ending, but for this to happen injuries would have to respect him.

II. He goes on a loan in the winter or summer market

An outcome that has its advantages and disadvantages. Dembélé could try his luck in a short stretch of time to play in the Premier League or in Ligue 1, as plenty of teams would be interested in getting the forward on loan. On the upside, he could regain his confidence and be in an environment not as toxic as in which he is living with the Spanish media. He would have less pressure and this short exit could help him escape from the Barça bubble. If he goes out on loan, we still have good options to replace him in Ansu Fati and Carles Pérez. The only thing that could go wrong is that Dembélé feels rejected by Barcelona or suffers another injury during that period.

A sale would be a scenario that I personally wouldn’t like. Unless we signed him again, it would imply getting rid of him permanently. Offers won’t be missing. PSG, Chelsea, Manchester United…The French player have several favourable destinations, as anyone would bet on such a young high-quality footballer. Here the main loser would be FC Barcelona, ​​who paid more than €100 million for him and would find it very hard to recover the amount invested in what was supposed to be Neymar’s replacement back in 2017. However, I’m sure that Dembele would adapt quickly to any club.

Analysing these 3 viable alternatives, I would say he’s expected to stay. The board and technical staff have declared their support to Dembélé with this new injury, as they all made huge efforts for him in the past. Many decisions will have to be made by manager and directive, but for now, new opportunities open up with Ousmane’s unavailability. Firstly, more minutes for Ansu Fati, who recently signed a millionaire contract extension and will be a fundamental piece in Valverde’s rotation policy as he continues to gain experience and mature. We’ll also see Carles Pérez more. He has played next to nothing in the last encounters, but his quality is there. A different type of winger, one that would be favoured by Pep Guardiola as he did with Pedro in his time at Barcelona. Carles knows how to open spaces and control his own speed, an addition of luxury for the Catalans’ bench. Dembélé’s absence is in good hands.

“As a player, Dembélé is impressive. Hopefully this year he doesn’t have bad luck with injuries as he did last year. When he needed him most, he was injured. However, he is a very good player that can give us a lot for the present and the future”

Finally, what the number 11 should focus on at present is on his recovery, on complying with his therapies and building his confidence. In a situation that makes me feel helpless and sad, he needs more than ever the support of all fans and teammates. Whatever happens, we have to be patient, as the moment for Dembélé will arrive. Probably many of you have already lost patience and faith in the 22-year-old, but everything comes. You have to wait wisely. He has everything to be a superstar. A specialist with both feet, dribbling, explosive speed, good finishing, vision, and the ability to change the pace of Barcelona’s game. We only have one option. Trust Ousmane.

It’s not easy being Rakitić
What did you think of this article?