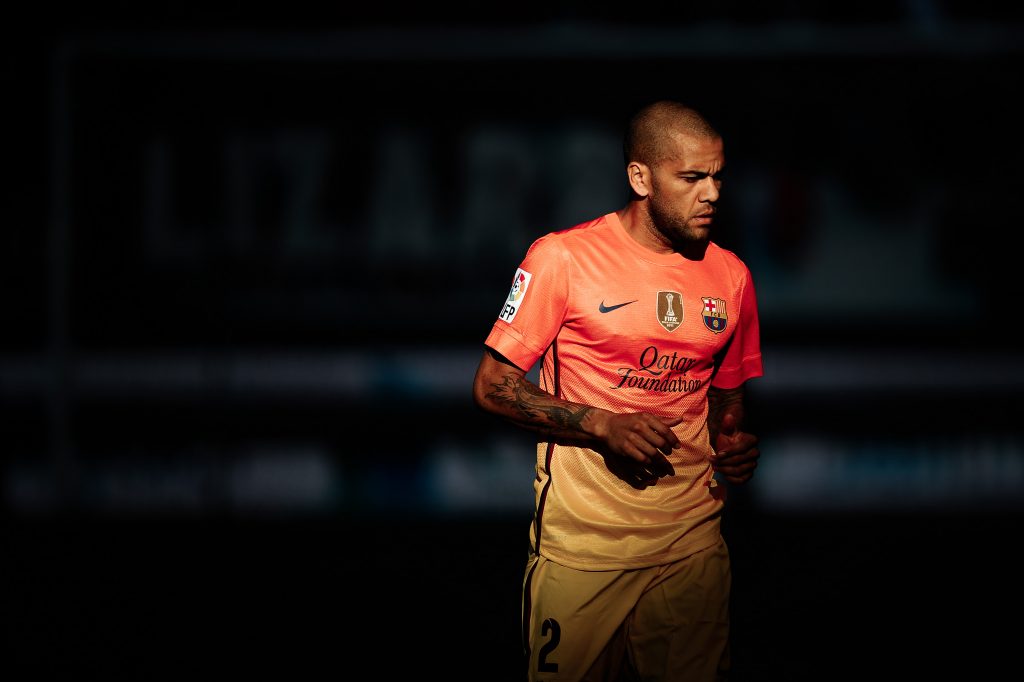 Teams that dominate football nowadays have a frightening full-back partnership, but that’s not the case for Barcelona anymore.

Often confined to an afterthought, only playing in goal can claim to be as unfashionable. But even goalkeepers are kingmakers on occasion. Perhaps this is part of the reason behind the trend of converting your winger into a full-back – the least glamorous position of all.

Most grow up wanting to be Cristiano Ronaldo, Lionel Messi or Neymar Jr, not have them flying towards you. Dani Alves, however, is glamorous, eccentric – a star. He too transitioned into the role but it was no less peculiar when Sevilla’s best player, glitzy and brilliant, was a right-back. Dressed like Prince – the singer, not the Boateng variety –, the Brazilian has had a comparable impact on his own genre.

Only when Alves began gliding around midfield in Paris, with disconcerting lack of effort, was his technique properly recognised. For all his extravagance off the field and talent on it, he was never appreciated like other integral pieces of Barcelona’s pièce de résistance. Xavi Hernández and Andrés Iniesta received a marching parade of events and simpering tributes; Alves was left to leave on a free. The club happy to save paying a premium salary for what, after all, was just a right-back.

In fitting with karma’s sense of satire, it would be the man playing in his position whose corner would consign a creaking Barcelona to total collapse. The quick thinking that now belonged to Trent Alexander-Arnold, which sealed Barcelona’s plunge from grace, was the sort of intelligence and invention which has been missing at Camp Nou since Alves’ departure. Before that match there were cracks, now there are gaping holes.

And yet at the height of the global game now, the footballing benchmark, is a team defined by its full-backs. Jürgen Klopp’s flanks at Liverpool both symbolise its attributes and act as a functioning litmus test for the manager. They are cause and effect. Quick, incisive and full of flare, Alexander-Arnold is a technical marvel. On the alternate side, Andrew Robertson is steely, forged from a gritty competitiveness. Honed by his master and commander, he carries out every order with maximum intensity and commitment.

Klopp’s most fierce adversary, who got the better of him, also set his stall out to dominate the Bundesliga with his full backs. Pep Guardiola’s Bayern set records in Germany, destroying everything put in their way. Suffocating opponents with possession. A domination made partly possible because he had two extra midfielders than everyone else – his full-backs playing inside not out. Like Liverpool, David Alaba and Philipp Lahm were probably the best around at Bayern’s zenith.

The stick they beat Bayern (and Pep) with was their failure to win a Champions League. Crucially, the team that won it more than anyone else had difference-makers at full back too. No doubt the Bavarians feel Real Madrid have stolen one or two from their grasp in recent years. But they too were powerless to stop the creativity and attacking prowess of Marcelo, irresistible on his day.

Expert game management was a hallmark of European trophies 10, 11, 12 and 13 for Los Blancos, but behind Sergio Ramos, Dani Carvajal has few rivals in this particular art form. Neither shy of claiming non-existent contact or making his own very real connections, what Carvajal lacked in poetry he usually made up for in efficacy.

So if full-backs are the measure of a good side, the proof of a quality outfit, Barcelona’s current options paint all too accurate a picture. At one time the best in the world, an ageing Jordi Alba is struggling to replicate his old self. Just five assists this season pales in comparison to the thirteen from last year, for one half of what was once the deadliest one-two in football. Nowadays Alba’s own gamesmanship borders on the absurd at times. In the past it was a tool against the opponent, for their benefit. Now it feels all too often like a cringeworthy attempt to distract from his own deficiencies.

Under Ernesto Valverde, Jordi Alba was one-dimensional – but extremely effective. Much like the side itself. Similarly both had their weaknesses cruelly exposed at Anfield in May 2019. Once so excellent at finding Messi on the return, laying it on for the finishing touch, the same move now looks laboured this season. Relinquishing all responsibility to Messi even in the event of teammate offering an objectively better option.

There is still the odd flash of Alba’s ability, the faint suggestion that if all the conditions were there he could reach the required level. But the average culé is left with the overwhelming sense that if not a replacement, a young pretender to at least challenge if not succeed Alba, is necessary. Only there is none forthcoming. The product of an incoherent transfer strategy, Junior Firpo lacks the confidence and the competence for this role. Favoured ahead of seemingly readymade youth products in Álex Grimaldo, Marc Cucurella and Juan Miranda – sold for a quick buck or lacking the trust they were never allowed to earn.

Barcelona have problems in both full-back positions | Photo by Imago

On the other side, the situation is less clear, a right-back spot that is not sure what or who it is. Nélson Semedo has shown instances of brilliance, exceptional footwork and lightning speed; yet there is inescapably something missing. Confidence, understanding of his role, cohesion with his teammates; after three years in Catalunya, the Portuguese still looks like a guest in his own home. Like many of Barcelona’s recent recruits, there is little doubt he is a good player, but he has never been at ease in this team.

His alternative is almost the polar opposite. With the ball, Sergi Roberto’s grasp of the game and. maybe more importantly, his relationship with Messi is often without fault. Yet all the smarts that he brings to the position are undermined by the small matter that he is not a right-back. It looked good for two seasons, intelligent even, but even those who adore him can admit the makeshift nature of this solution. So many of the key attributes required of the modern-day full-back do not come naturally to him. To his credit, his own success allowed the club to forget that it was a temporary option in the first place. Within the context of a dysfunctional unit though, it is hard not to remember.

In their own ways, just as with the excellent teams of past and present, Barcelona’s full-backs are a metaphor for the entire side. The days of supremacy seem increasingly distant, the heavyweights of a team never properly replaced or left to grow stale. Many of the players are not necessarily bad themselves, but are badly utilised. Without a defined system, their weaknesses are magnified. Simultaneously symptomatic of and contributing to the misshapen and floundering Barcelona we have become used to. You really don’t know what you’ve got until Dani Alves is gone.