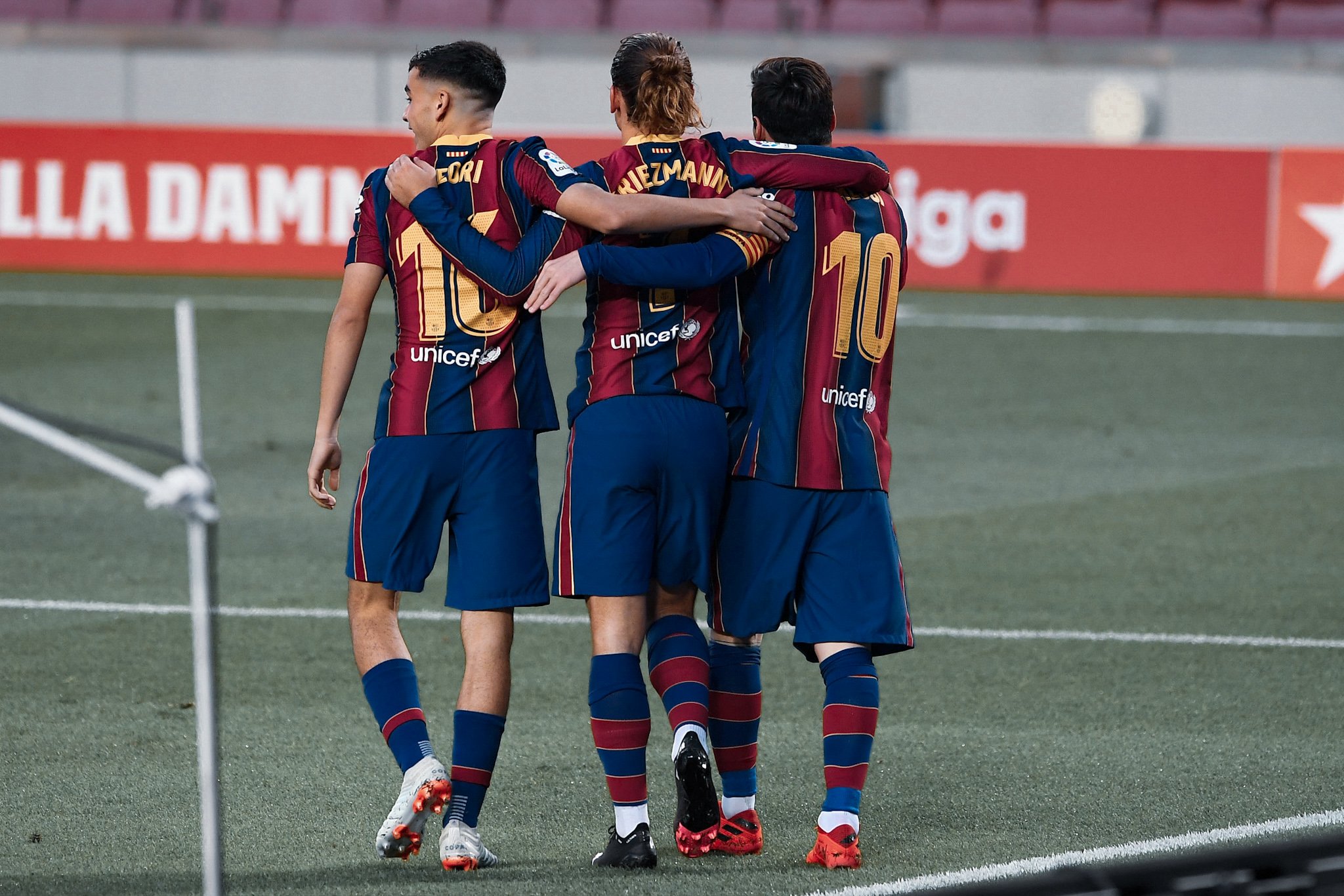 Ronald Koeman will have to find the perfect pieces in the attack for Barcelona as they face an unbeaten Atletico Madrid at the Wanda Metropolitano this weekend.

Matches against Atletico Madrid are never ordinary games for any team visiting or hosting them. No less when it is Barcelona, who have had their fair share of iconic moments against them. The Blaugrana will travel to Madrid to take on Diego Simeone’s men for the first time this season, hoping to build on their pre-international break victory against Real Betis. The hosts are one of the only six teams across the top five leagues that are have registered no losses so far. It is far from surprising, however.

The capital outfit often start the season in blistering form but soon start falling down the ladder as the campaign wears on. More often than now this is a result of the lack of the number of chances they create more than defensive intricacies.

Led by Luis Suarez and a Joao Felix finding his footing in the La Liga, Atletico have not shown signs of stopping this season, though. Even though El Pistolero will miss the outing against Barça, they seem to have found the perfect balance on both ends of the pitch for the first time since 2013/14 when David Villa and Diego Costa starred for Los Rojiblancos. And Culés of everyone, do not need reminding how that season ended for them.

There seems to be little stopping the sensationally talented Joao Felix this season. (Photo by PIERRE-PHILIPPE MARCOU / AFP)

By this point in the season, it is clear that Barcelona, as rapid and creative as they are in attack, show a less than adequate level of defending. Covering the gaping holes at the back will take time, and the results will become clear over the course of the season.

Right now, what Ronald Koeman can control, however, is selecting the perfect attacking quadrant for the game as his team attempts to outscore them. There is little to no chance that the Dutchman will stray away from his 4-2-3-1, which has been used in every single game this season.

Obviously, the ideal Barcelona attack would constitute of Ansu Fati. The Spaniard suffered a torn internal meniscus against Betis and is out for four months at the bare minimum. The rest of the attackers, while fit, will face the selection wrath of Koeman.

Barça Universal runs the rule over Koeman’s squad, taking a look at the possible options for the manager in each position in order to see which front-four could work – in theory.

Koeman has constantly been rotating his options across the attack, either to cater to the needs of what is going to be an exhausting season or in an endeavour to seek his best lineup. One of the major areas of the experiment is the attacking midfield where has used Lionel Messi, Philippe Coutinho, Antoine Griezmann, Pedri, and even Frenkie de Jong in the dying minutes against Deportivo Alaves.

When the season started, Coutinho was his go-to option for this role, but an injury to the Brazilian after the El Clasico forced Koeman into making some fundamental changes. This included shifting Antoine Griezmann in the centre along with Lionel Messi.

Neither of the two players are natural strikers, but have a history as prominent goalscorers. This stems from their immaculate reading of the game and the ability to read each other’s movements. In practice, it works better than having one of Pedri/Coutinho in the AM role with one of Messi and Griezmann uptop, as the former pair is unable to switch positions with one of the latter, often leaving the team with two deep lying forwards in one attack and nobody to play off of.

The Messi-Griezmann connection is the most important one in the Barcelona attack. (Photo by Josep LAGO / AFP)

Moreover, it looks evident that the World Cup winner looks more lively when playing with his captain. Maybe it helps him take some pressure off his back, or maybe the involvement of another experienced player near him aids his attacking prowess.

All said and done; even though Coutinho is back from injury, it would be best if Koeman sticks to the pairing of Lionel Messi and Antoine Griezmann and let them feed off each other’s genius like they have, multiple times this season. Not to mention, a big performance against his former team may help Griezmann find his long lost confidence.

Starting Griezmann and Messi together will be of little to no surprise, but it is the wings where the former Everton manager needs to earn his bread.

With Fati out for the rest of the year, Ousmane Dembele has earned a pretty straightforward spot into the starting lineup, which can be either on the left or the right. His inclusion in the starting XI against Atletico seems rather predictable, as well.

The Frenchman is remarkably quick, and if he uses that to his advantage, can help catch Atletico on the counter after a turnover. Kieran Trippier, for all his defensive improvements under Cholo, is still their weakest link at the back and is far from immune to positional mess-ups. The same goes for Renan Lodi, who looks far from comfortable against swift-footed wingers and often gives away an easy path on the flank, or several set pieces.

For the opposite side, Koeman has the options of Coutinho and Pedri in the form of first-team options. Despite being natural attacking midfielders, Koeman has used them at least once each out wide, but only Pedri’s performance aginst Juventus while on the LW earned plaudits.

In fact, Coutinho has a rather harrowing history with the left-wing after being deployed their persistently by Ernesto Valverde in the 2018/19 season, which eventually led to a dip in form. It has become increasingly clear that Coutinho is part of the midfield.

While Coutinho is returning from a month-long injury, Pedri picked up a knock against Faroe Island while playing for the U21 Spanish side. It would be unwise to field either of the two in a physically demanding game as more injuries would be another axe to Barça’s trunk.

❗Pedri received a knock in Spain U21s’ first game against Faroe Islands. Barcelona contacted the RFEF, and it was agreed that he wouldn’t participate against Israel to avoid any risks before the Atlético match. [sport] pic.twitter.com/KzdysmGq71

As a matter of course, Konrad de la Fuente may come up as the option in this position given his experience in it. Konrad will help to stretch an otherwise compact Los Colchoneros defence, and can also help give Mario Hermoso a run for his money thanks to his electric pace.

On the contrary, it might not be the best game to give the American his debut. Simeone’s men go hard on attackers, allowing only one of the ball or defender through. A disappointing performance followed by some harsh words by Koeman in the press-conference will go a long way, hurting the youngster’s morale.

Our pick as Dembele’s partner is Fransisco Trincao. Since arriving from Sporting Braga, Trincao has failed to make a name for himself in Koeman’s team, and his role at the moment looks to be reduced to just cameos. A start against arguably the best team in the league will serve him mentally, eventually, and hopefully en route a successful campaign for both him and the team.

Trincao will round up the Barcelona attack on the right. (Photo via Imago)

It will require Dembele to shift to the left, which he does not prefer, but we can expect him to keep his twinkling form alive solely due to the raging momentum he is carrying, if not anything else.

From a tactical standpoint, placing the 20-year-old on the right means, there will be four players in the attack for Barcelona with expertise in long-range shooting. This skill often comes in handy against Atleti as their low-block allows little to no gaps for attackers to pass through.