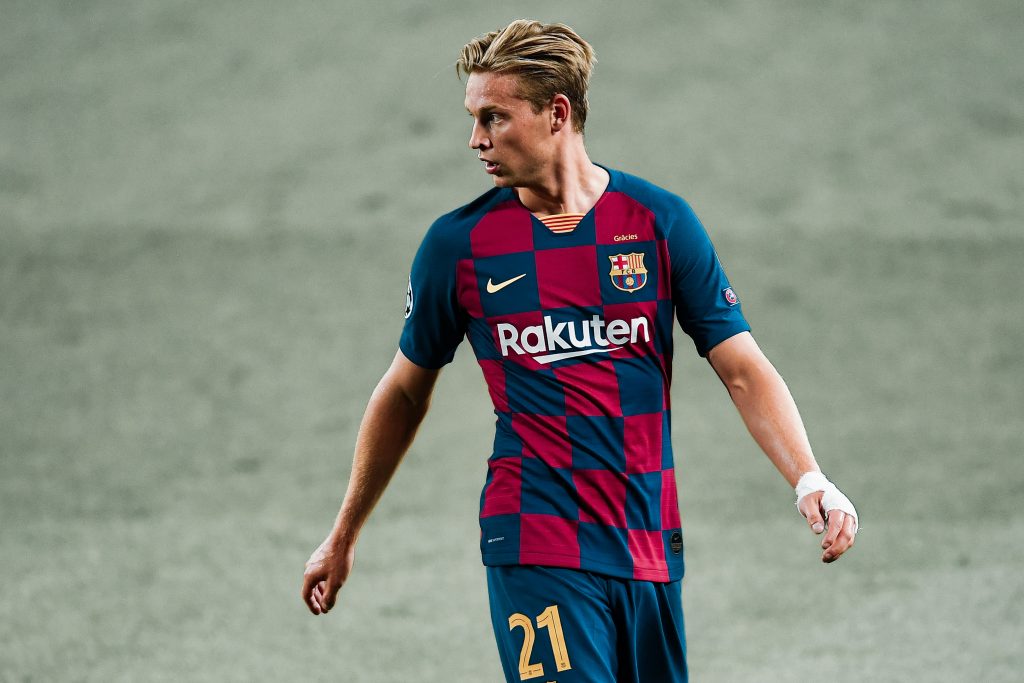 As Barcelona clinched a crucial win over Napoli in the Champions League round of 16, Frenkie de Jong stole the show with an immense performance at the Camp Nou.

Despite Barcelona being overly dependent on Lionel Messi’s miraculous efforts in midfield, against Napoli, there seemed to be a lack of strain on the Argentine as a fiery Frenkie de Jong took matters in his own hands, asserting the midfield area throughout the 90 minutes. The Dutchman’s charismatic performance arguably proved to be his best, and most impactful of the year so far.

Without a shadow of a doubt, this was the game that elevated De Jong to the next level, the game that highlighted De Jong isn’t just another temporary solution to Barcelona’s catastrophic midfield, but instead a long-term investment, one that is already paying the club dividends. The blonde, beaming boy from Ajax is not captivated by the big stage, and it is players like him that are truly going to help the club seize some much needed silverware as well as strengthen their long lost philosophy.

A key aspect evident in Frenkie’s gameplay was the liberation and freedom he had at his disposal. Whether it was building out plays from the back or simply lending his services upfield, De Jong ensured he was a part of every move in midfield. The authority he had was put to excellent use with his quick feet and imaginative personality allowing him to always keep the Napoli players on their tip toes. The young midfielder controlled the pace of the game, dominating almost every part of the pitch and marking his territory wherever he went.

It was a joy seeing the De Jong fans were so used to watching at Ajax finally come to life as his participation on and off the ball was utterly unmatched. Due to his excellent anticipation of players, he was never fazed by pressure. Infact, he seemed to welcome it. As soon as Gli Azzurri would pounce on him, he would squirm his way through with the most delicate of touches. Witnessing the 23-year-old look so vibrant and effective in such a high-magnitude game was truly a relieving sight for the blaugranas, who, over the years, have been in desperate search for such expressive and elated midfielders.

Whilst it was an undeniably game-changing performance, the number 21 was unfortunate to have been robbed off a beautifully executed assist in the closing stages of the first half, where he sent a terrific long ball in the opposition box, spotting an open Lionel Messi, who managed to chest it down and beat David Ospina in goal. Woefully, a controversial call from VAR claimed that Leo had contact with his arm, which ruled out an incredibly well deserved goal contribution for De Jong. Nevertheless, his ability to pinpoint the number 10 in such a fruitful position exhibited that even in terms of his vision, he was a cut above everyone else, including his own teammates.

Although fans will be anxious to see Frenkie continue playing at such a high level, only time will tell if Sergio Busquets’ addition will seem to hinder the former Ajax man’s performances once he’s back from suspension. It’s a no brainer that, while he is more than capable of adjusting as an interior, Busquets’ involvement on the field often means that he is obliged to take unnatural roles on the field. It will be a huge test for Quique Setién to incorporate the two virtuosos in midfield, without hampering any of their performances. As long as De Jong doesn’t lose the jurisdiction to situate himself according to his own preference, Barcelona could become definite favorites in the Champions League.