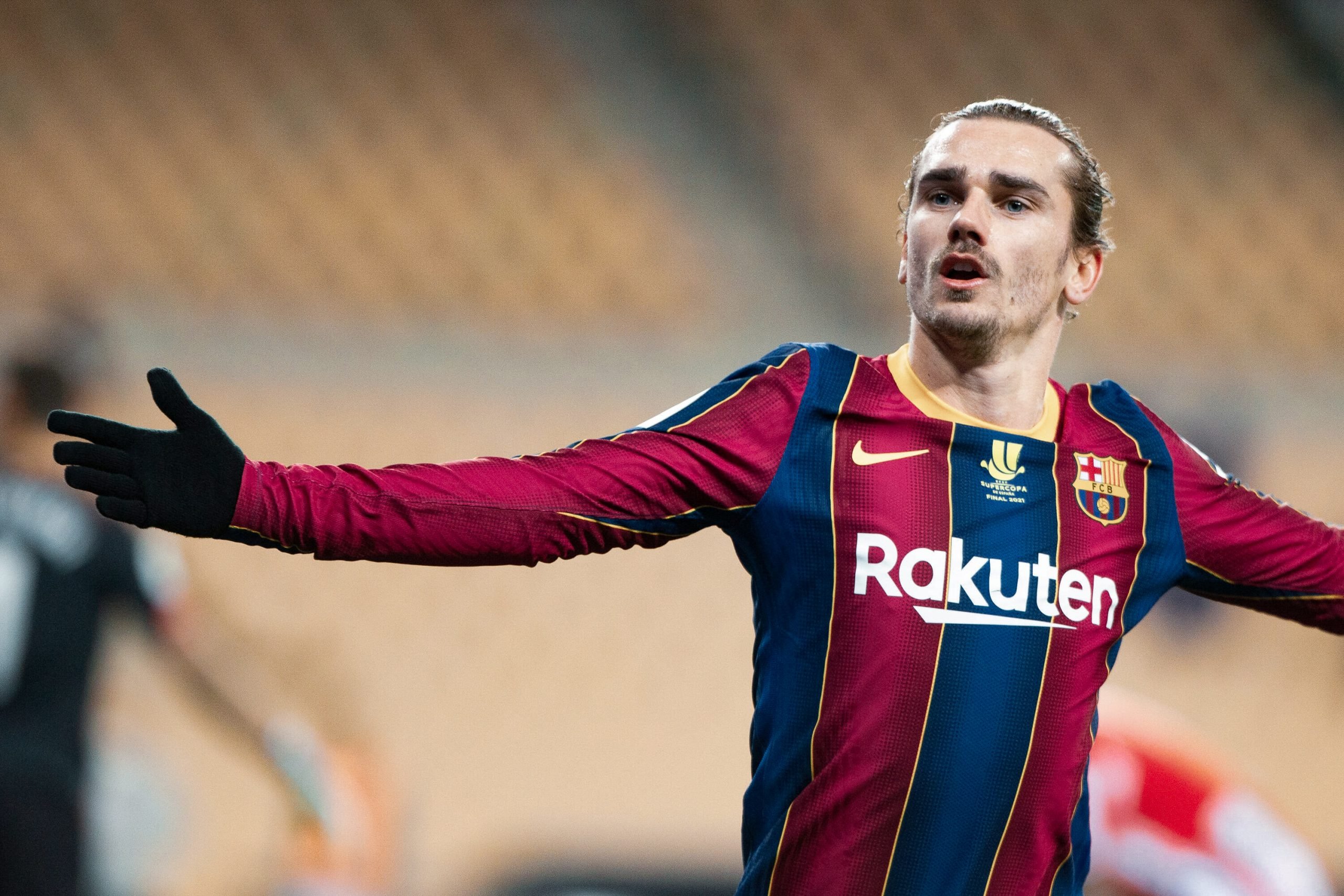 Players come, players go. They succeed, they fail. Some give up, some persevere. Antoine Griezmann’s tale at Barcelona so far seems to be just that — one of perseverance. Since he was signed in the summer of 2019, in-fact, since he has been linked to Barcelona, excitement about his arrival was scarce. Questions and doubts, however, have been plentiful, of course for many valid reasons. But he is here and has been for a while now. The biggest question, though, is he finally showing that he’s here to stay?

If you looked back to as early as December 2020, the answer would lean towards ‘no’. But of late, Griezmann seems to have encountered a purple patch. Since his signing, he did, of course, show signs of his quality. But for a player who was signed for €120 million, signs aren’t enough.

Especially when a forward is concerned, tangible output in terms of goals and assists is imperative. Sure, Antoine Griezmann is not your traditional striker; barely a striker, actually, but then his other outputs were rather limited as well. He was under extended pressure as well once Luis Suarez’s departure to Atletico Madrid came to the forum.

The Frenchman couldn’t have been too pleased after falling behind the pecking order to Martin Braithwaite for a brief period. He did not play a single minute against Real Valladolid and after failing to make a mark against Eibar, was taken off in the 66th minute. Following which he was again left on the bench against Huesca where he entered only for the final few moments. For someone of his quality, these are highly discouraging signs.

To make matters worse, he was on a nine-game goal drought heading into the match against Granada in early January. But that game seemed to be a major turning point for the World Cup winner. With two wonderfully taken goals and an assist to boot, Griezmann snapped into life.

Coach Ronald Koeman has subjected his teamsheet to a fair bit of experiments since he arrived at Barça. Initially, he constantly kept returning to a 4-2-3-1 setup, which he seemed to favour the most. The insistence on a double pivot, however, did not yield great results. Barcelona’s season has been on a bumpy trajectory, and the lack of tactical stability is one of the key reasons on the pitch.

Koeman’s decision to shake things up again however and revert to a 4-3-3 come January. And it is fair to say it has reaped wonderful results. Despite currently being 10 points behind league leaders Atletico Madrid, Barça have taken massive steps on the road to shaping up their turbulent season. With some adjustments to the attack and a few alterations to the interior players, the Dutch manager has managed to improve the collective performance and provide a breath of fresh air for Griezmann.

The 29-year-old has struggled consistently to establish himself in one position for Barcelona. The constant changes have no doubt hampered his reading of his teammates’ game and adapting his own. Now with Lionel Messi utilised in a false-nine role, although Griezmann starts on the previously unnatural left flank, he is able to occupy much more favourable zones of influence.

With Griezmann occupying the zones that Messi leaves free, he is helped on by the creativity of Frenkie De Jong and Pedri from midfield. Ousmane Dembele’s inclusion has also helped his compatriot massively. The winger’s pace and trickery opens up plenty of avenues offensively which allows Griezmann to occupy more dangerous positions.

The pair of superstars possess enough firepower to light up any pitch in the world. One of the doubts surrounding Griezmann’s signing was about how his profile is so similar to Messi. In terms of the spaces they occupy, the way they drop deep to receive the ball, the Frenchman is rather similar to the Argentine. How they would fit together was an imposing question.

However, Koeman seems to have found a viable solution, at least for the time being. Griezmann and Messi are finally beginning to click. And as is the case with any partnership in football, the increase in output is a two-way street. Lionel Messi himself has had moments where he has faltered this season, but come January, the talismanic captain has steadily returned to his dangerous self. And when you have a firing Lionel Messi at the helm, things always become much easier as a teammate.

Since the turn of the new year, Messi has already scored six goals. And now that he is beginning to strike up a fluid partnership with Griezmann, Barcelona have looked very dangerous on the attack. The Frenchman’s runs in behind are finally being found, and with Messi’s knack of being just at the right place, the pair have managed a lot more direct output. Griezmann has eight assists so far this season for Barça, and three of those have been for Leo.

This was visible against Granada as well as Griezmann’s off the ball movement coupled with Messi’s finessed passes helped Barcelona record a comeback win in the Copa del Rey.

Their relationship off the pitch seems to have improved as well. The rumour mill is always operating and ever since Griezmann’s arrival it has been churning out reports that the two have a strained bond. However, even Messi stated in a recent interview that the two drink yerba mate together. And amid all the controversy surrounding Messi’s leaked contract, Griezmann was very vocal in support of his teammate.

Aside from proving his pedigree on the pitch, he seems to have also instilled a sense of camaraderie in a very fragmented squad. There is no doubt that he possesses the mentality of a true winner. He is not one to roll over and take a loss easily. A prime example of this was his reaction following the bitter defeat to Athletic Bilbao in the Supercopa where he did not shy away from heavily criticizing the team’s performance:

“We are fu*ked, annoyed, angry. Someone has to shout during these actions. We don’t communicate, we concede goals due to small things like giving directions to each other when the opposition cross the ball in. We need to improve.” said the Frenchman.

He was easily Barcelona’s best player on the night, and scored two goals against the Lions, but lapses in concentration led to a defeat in extra time for the Catalans. Even now, when asked about Messi’s salary in a presser, he snapped back saying that none of this matters. A clear indication of a focused individual who does not want to tolerate nonsense.

Griezmann is also seemingly becoming a well-liked figure within the dressing room. During Christmas, he gifted all his teammates custom Louis Vuitton backpacks with their initials. A small, but telling gesture, one that was no doubt well received by his colleagues. He of course, shares a great relationship with his French compatriots Ousmane Dembele, Clement Lenglet and Samuel Umtiti, which is probably helping all of them get a deeper sense of belonging.

After his crucial winning goal against Athletic Club in La Liga over the weekend, he led the celebrations with the entire team huddled around him on the touchline. And now, he’s backed it up with a blinding performance against Granada in the Copa del Rey. Two vital goals and two crucial assists against Granada have sent Barcelona through to the semi-finals when they were mere seconds away from elimination. If that isn’t telling of a player’s character, nothing is. When it mattered most Griezmann arrived at the party.

All in all, the former Atleti star has definitely begun taking positive steps towards turning his rocky start at Barcelona around. Following his heroics against Granada, he now has 29 goals for the claret and blue outfit. He has surpassed Ludovic Giuly and now is only behind Thierry Henry (49) as the club’s highest-scoring Frenchmen.

His purple patch of form has seen him score seven goals and grab six assists in his last nine games for Barcelona. His form has been key for the club, who have managed a perfect start to La Liga since January. In fact, their only loss across all competitions has been in the Supercopa final. But even then, Griezmann showed really positive sensations. And he knows he’s on the right track as well. Following his stellar performance in last night’s quarter-final, he was quoted saying:

“I have been playing well since January and I want to continue like this until the end of the season. I have the confidence of the coach and my teammates and that’s easier. The most important thing is teamwork.”

There has been non-stop speculation about Griezmann’s future at the club. More often than not, he has been labelled as expendable, and there have been constant rumours about him being offloaded. But in this kind of mood, he is a precious asset to any football club in the world. With his newfound sense of confidence and a steely resolve, the forward is out to prove that he, and for what it is worth, he is certainly the Mann of the Hour at Barcelona right now.