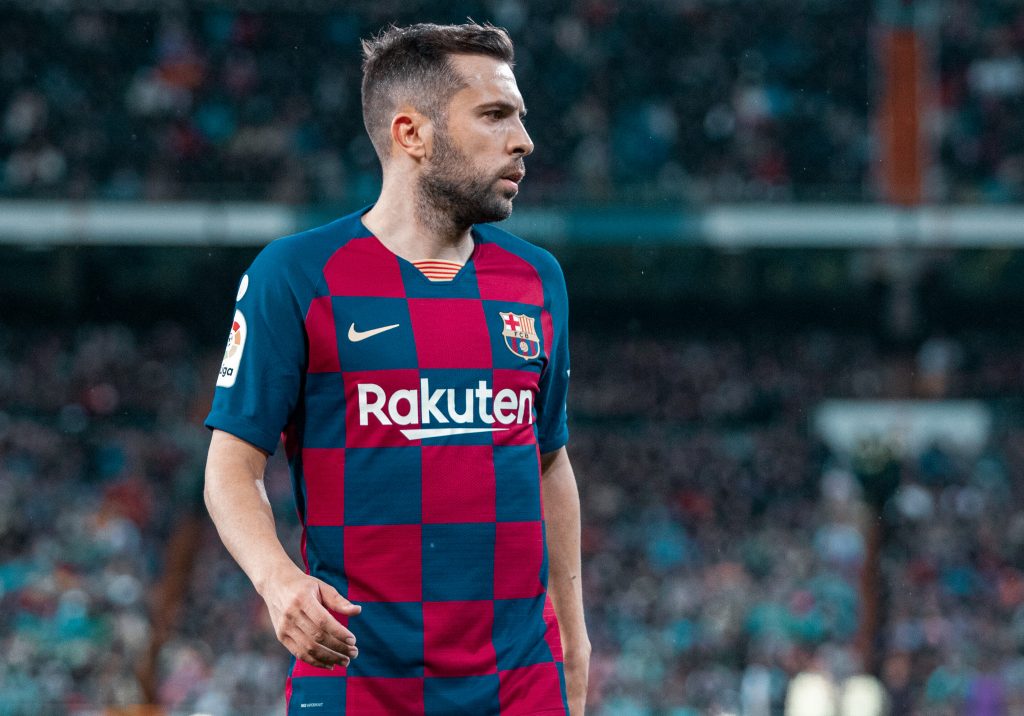 The form of Jordi Alba since the restart has been stellar. The Spaniard, seemingly, has really benefited from the break in terms of form and fitness.

Jordi Alba has been an integral part of Barcelona’s attacking prowess for quite a while. Nevertheless, this season he had his low points. With Junior Firpo struggling with injuries and not enjoying the best of starts to his time at Barça, Alba has not had much respite. Despite playing week in, week out, the diminutive left-back has consistently been one of the club’s most important players.

The handful of bad games he has had, though, can perhaps largely be attributed to lack of rest. Jordi Alba has also suffered from a fair share of injuries as a result. He picked up a hamstring injury in September 2019, which recurred in November. After more than a month on the sidelines, he was slowly starting to pick up form. Yet in February, he picked up yet another injury which left him out for around two weeks.

Once he recovered, just two games later, the pandemic forced football to a halt. Now, after three months of time to rest and recover, the form of Jordi Alba has been immense. Since the restart, he looks like a player reborn. He has returned sharper, smarter and faster than ever. The Catalan has gone through such a turnaround that he even got his driver’s license. About time, right? But, of course, his football is what’s most important.

Pivotal figure in both attack and defence

Jordi Alba’s attacking contributions and his telepathic partnership with Lionel Messi are always talking points. So many of Barça’s goals have come from that left channel, utilising Alba’s speed and great positional awareness. However, his defensive contributions are thus largely overlooked. Especially since the restart, he seems to be running more than ever. His tracking back has been exceptional and on more than one occasion has he managed to make goal saving blocks and interceptions.

Here’s a brief look at his finest performances since La Liga’s resumption with data:

*All stats from FotMob via OPTA

In the very first game since the restart, Jordi Alba seemed really fresh. The break had done him a world of good. Alba notched a goal as well as an assist as Barça cruised to a 0–4 victory over RCD Mallorca. He had a total of 90 touches and completed 66 out of the 69 passes he attempted. A success rate of 96%. He also made three interceptions and had a dribbling success rate of 100%. An immense performance that would also be a major confidence booster for him after his injury woes.

While a largely unfavourable result for the blaugranas, Alba and his full-back partner Nélson Semedo were key figures in trying to make something happen offensively as well as containing Sevilla at the back. After returning from suspension against Leganés, at the Sánchez Pizjuán Alba was tasked with dealing with the highly dangerous Lucas Ocampos. He managed to keep him very quiet. Jordi was instrumental in dealing with the crosses and the overloads coming from Sevilla’s right flank. The Spaniard also made two key passes and two vital clearances.

In what was an all-round defensive masterclass from Barcelona against Athletic Club de Bilbo, Jordi Alba continued with his excellent form as he was once again key while tracking back. He made two crucial clearances and interceptions once more. He was constantly able to wriggle free down the left to put in dangerous crosses and stretch the Athletic Club backline. He was heavily involved in the build-up with 116 touches and 80 completed passes with an 89% success rate.

In spite of another poor result away against Celta de Vigo, Jordi Alba’s contributions largely saved the Barcelona’s blushes from further embarrassment. If it weren’t for a couple of vital blocks and particularly a heroic interception from a left flank cutback, Barça could have dropped all three points. Jordi had a 100% tackling success rate before his substitution. Celta tried to target the right flank a lot more once he was off, which made his absence even more noticeable.

In what was perhaps Barcelona’s finest performance of the campaign, Jordi Alba was once again in peak form. The match against Villarreal on Sunday was a sensational team display with fluid interplay and relentless chance creation, in which the 31-year-old was instrumental. He won two out of his three duels and created two great chances as well. His distribution was top notch once more with 80 successful passes with a completion rate of 90%. And to cap it off, he even notched his third assist of the season with a fabulous pass to Ansu Fati for the fourth and final goal. He made the pass to the opener too, even if that wasn’t registered as an assist as it was a Pau Torres own goal.

Overall, the level exhibited by the veteran left-back since the restart has been impeccable. And if Barça are to fight till the end in this La Liga title race and the remainder of the UEFA Champions League, Jordi Alba will have to continue his rich vein of form. He has shown once again, why he has been such a pivotal part of this Barcelona side in recent years and that life after him, is going to be tricky.