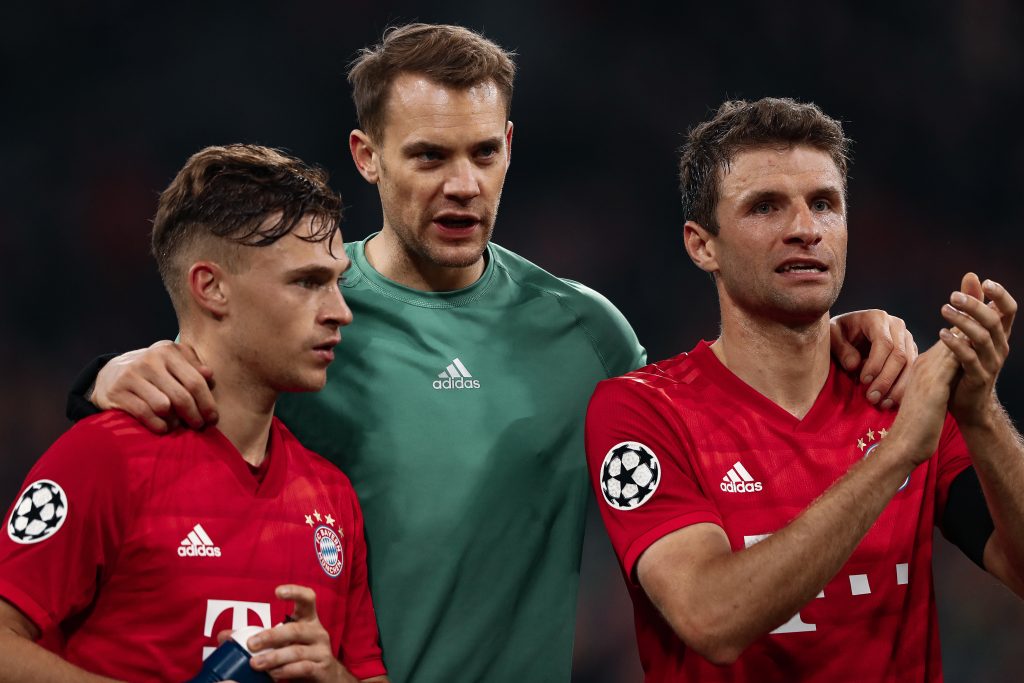 La Liga returns this weekend, and it will surely be a lot of fun to see our footballing icons running again. However, the Champions League is set to relaunch after the leagues, and these are the five favourites to win the coveted title.

The Champions League is a festival of football many are eager to see in action again. The hundreds of actors that are going to participate in it could not wait more for the competition to resume. After the first legs of the last 16 were played, some teams came out as clear favourites, and others showed glimpses of their talents. From those teams, five are clear favourites for the Champions League title.

Diego Simeone’s Atlético de Madrid is the clear favourite for the title, and there are three reasons for it. The first one is that Real Madrid lost at home against Manchester City in the first leg. So the team that knocked out Atleti the most in recent Champions League history is on the verge of elimination and the Rojiblancos have already booked their ticket for the quarter-finals after beating last year’s champions Liverpool.

Secondly, Cristiano Ronaldo’s Juventus are also in an uncomfortable position to qualify after losing 1–0 to Olympique Lyonnais at the Groupama Stadium. A little reminder that Atleti have always failed to qualify for the next round after playing a Cristiano-led side. If Juve gets eliminated before playing Simeone’s squad, the Colchoneros‘ chances could increase.

The third reason is that Atlético look like fierce rivals this season, especially in the Champions League. Of course, their superb win against Liverpool showed the world that they had everything to win the cup. Atleti fans would be excused if they fancied their chances a little more this year.

Bayern Munich are the best team in Germany, and their form suggests that they are the best in the world. The Bavarians have a team that could win it all come the end of the campaign. With a 3–0 advantage over Chelsea, they are inevitably going to advance to the next round, and they have got the most in-form striker in the world. Robert Lewandowski is having the best season of his Bayern career, and the team around him doesn’t look too bad either.

❛ He’s having the best year of his career. Everything goes in. He’s an animal – the best number 9 in the world ❜

Manuel Neuer is back to his best, Jérôme Boateng is finding his feet again, David Alaba is proving to be a superb centre-back as 19-year-old Alphonso Davies is shocking everyone at left-back, Joshua Kimmich and Thiago Alcântara are pulling all the strings in midfield, Thomas Müller is reaching his peak form as Der Raumdeuter or space explorer, and Serge Gnabry is playing at the top of his game.

Hans-Dieter Flick’s side has recovered from Niko Kovač’s underwhelming stint and is now feared all over Europe. The return of the Bundesliga has shown no slowing down from Bayern, and the confidence they had displayed against Borussia Dortmund two weeks ago and Bayer Leverkusen this weekend was frightening for any team in Europe. They will be a force on the next rounds of the continental tournament, and they are undoubtedly favourites.

Manchester City are also the best team in England left in the Champions League and one of the best in the world. This season in Europe and England, they have showcased their talents even if they are only second in the league. However, it is worth noting that Liverpool have obliterated the league this season and City still have had stellar games. Under Guardiola’s leadership, they have scored eight against Watford, three against Arsenal and have won against Real Madrid at the Santiago Bernabéu.

Now, with the Premier League surely out of reach, they can focus solely on their primary goal, the Champions League. Beating Madrid is a step forward in their bid for European success and City have one of the best elevens in the world on their day. The likes of Kevin de Bruyne, Sergio Agüero and Raheem Sterling have the experience of big matches and will want to avenge last year’s demons.

Barcelona haven’t shown the kind of football that was expected of them regularly this campaign but have demonstrated at times that they what it takes in big games. Being first in La Liga shows that the culés have been somewhat consistent and the returns of Luis Suárez, Ousmane Dembélé and Arthur Melo to full fitness in August the latest will boost the team as they looked physically and mentally drained in February.

Their performance against Napoli in the last of 16 first leg, which ended in a 1–1 draw, wasn’t that complete, but that’s partly because of Gennaro Gattuso’s style. More importantly, the away goal they got in Naples showed that players not called Lionel Messi could score away from home in the Champions League. In that case, it was Antoine Griezmann.

The quality the Catalans possess in their squad is frightening, and the rest could benefit them a whole lot now. With Quique Setién‘s tactics now instilled in the squad, good football might come back at the Camp Nou. The position in which Barça are in isn’t too bad, and the break will have a considerable benefit on the squad as they will look on to win a double this campaign.

Paris Saint-Germain is another team that advanced to the quarter-finals before football was halted. The Parisians finally have it easy in the Champions League. First, they topped their group after humbling Real Madrid in France. Then, they got a manageable tie in Dortmund, and they completed the comeback in Paris to advance to the next round, and now they find themselves in the best position.

Already crowned Ligue 1 champions, they can entirely focus on the Champions League to finally get to the final and ultimately win it. Also, this time Neymar Júnior is fully fit, and every player will be at its best physically. It’s up to them to own up to the status of one of the five favourites. Their main problem: with the Ligue 1 cancelled, they will have no official games of preparation until the Champions League resumes.

All in all, this year’s international content is more open than ever, especially with Liverpool being knocked out already. With the coronavirus break and the inconsistent form of many of the European giants, predicting a winner had never been harder. The next weeks of competition will determine how teams return to action, but it’s not one or two sides anymore who are the favourites to lift the big trophy in August.

Despite the 1–2 loss to Man City, Real Madrid are still alive, and if they come back against the Citizens their options will increase exponentially. Similarly, Juventus were defeated by Lyon in the first leg, but the 1–0 by no means is a definitive result. Other contenders like RB Leipzig or even Atalanta will put up a fight in the next stages. With the 2020 Champions League final expected to take place in Lisbon, instead of Istanbul, and with the remaining matches all being behind closed doors and one-legged, nothing truly is predictable anymore.