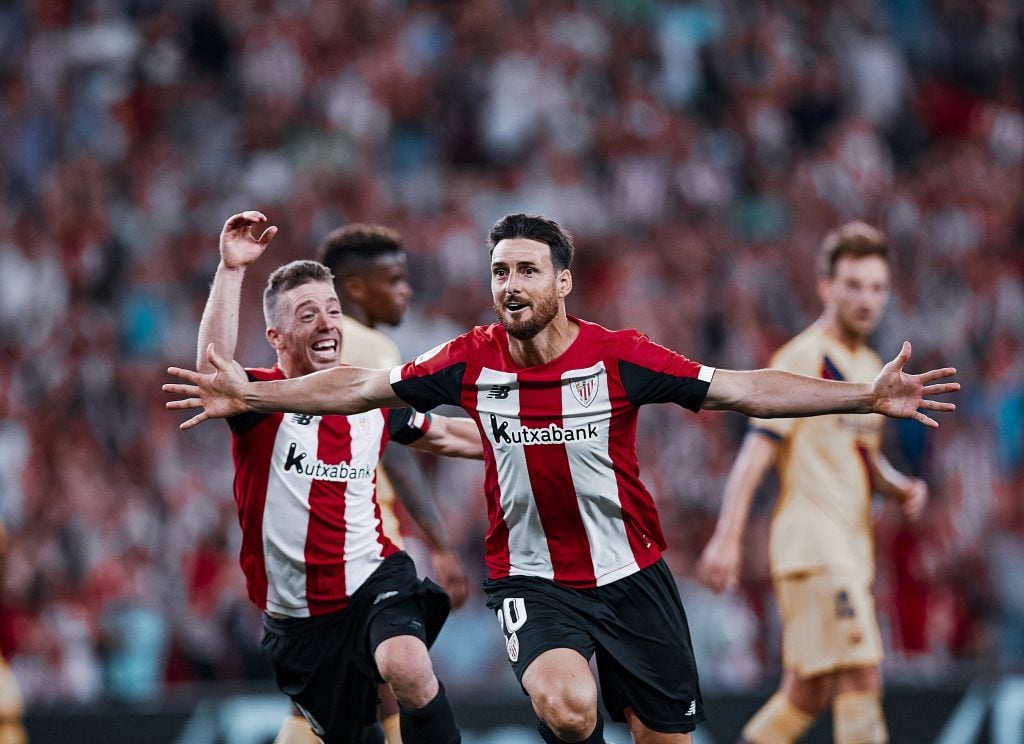 With 10 goals against Barça and 6 against Ter Stegen, a menace for culés but a joy for Spanish football has announced his retirement at the age of 39: Aritz Aduriz.

Matchday 1 of the 2019/20 La Liga season. 16 August 2019. San Mamés hosted Barcelona for the opening game of the new league campaign, only a week after the mythical striker Aritz Aduriz had announced that he would be hanging up his boots by the end of the course. There was still plenty of time to enjoy the goalscoring brilliance of an attacker that seemed eternal. However, injuries and age would make Aduriz less of a frequent starter than in his golden times. The Basque crowd, expectant to pay tribute to their veteran icon, waited anxiously as Aritz was left on the bench to face Barça, one of his favourite victims.

It seemed as if San Mamés wouldn’t celebrate a goal until the 38-year-old was on the pitch. So they waited. Minutes went by, but the moment was approaching. It was Aduriz’s time. 88th minute, and Garitano decided to introduce the number 20 for Iñaki Williams. While a predator replaced another one, the legs of Marc-André ter Stegen started to tremble as he saw his most feared, and most idolised, adversary prepare to encounter him one more time.

No one expected Aduriz to do anything incredible in the little minutes he had ahead, as the standing and loud ovation already seemed enough to justify the substitution. But Aritz, who has had his best years in his thirties, struck again. Roughly two minutes after being subbed on, Ander Capa delivered a high, long cross into the penalty area. Aduriz, with his back to goal as only the most instinctive centre-forwards can do, levitated above the ground to strike the ball while his body was horizontal in the air.

A moment that seemed eternal, but the next thing that happened was Ter Stegen diving in vain before collecting the ball in the back of the net for the sixth time in his career against the Spaniard. Lion Aduriz had delivered a blow once more, and San Mamés roared in front of such piece of art and ruthlessness from their immortal feline. When such ferocious animal is on the field, the tranquility of the scenery is just waiting for the hungry beast to catch his umpteenth pray.

❛ Sometimes football is so beautiful for such type of things. When you expect it the least, you see the ball coming and… ❜

Yet Ter Stegen, hero in most occasions, has had to be pray many times, particularly when Aduriz has been standing in front. In countless occasions the azulgrana shot-stopper has confessed that Aritz is the toughest striker he has ever faced. In Marc-André’s six seasons in Spain, El Zorro has scored six goals past the German. The latest overhead kick winner in the league is still fresh in the memory, while the three he scored at San Mamés in the 2015 Spanish Super Cup were some of Ter Stegen’s first bitter episodes with the culés. Having won everything in a historic second treble in the 2014/15, Barcelona’s title-winning streak came to an end once they encountered Aduriz’s Athletic. With a hat-trick in a 4–0 thrashing in the first leg, Los Leones got a big advantage ahead of the return fixture, where Aritz would score again, but this time with Bravo between the sticks.

❛ This is how the road ends for me – unforgettable and marvellous, from beginning to end. The doctors told me to go see the surgeon, sooner rather than later, to get a prosthetic to replace my hip and to try and go about my everyday life, as normally as possible. Unfortunately, my body has said enough ❜

Possibly Ter Stegen will be able to sleep a bit better now that he won’t have to face Aduriz anymore. “I’m glad he’s coming to the end of his amazing career because I won’t have to face him any more”, the Barça number 1 ironically said a few months ago. “One of the players who has done me the most harm in La Liga is Aduriz”. Aritz, who today has announced his definite retirement from football at the age of 39, will make Marc-André feel slightly more relieved now. But the Basque has handed some very valuable experience for the former Mönchengladbach youngster. And, above everything, some glorious years with goals and unpredictability that have made of Spanish football a safer space for unpredictable moments.

From rivals but not enemies, Gracias Aduriz!