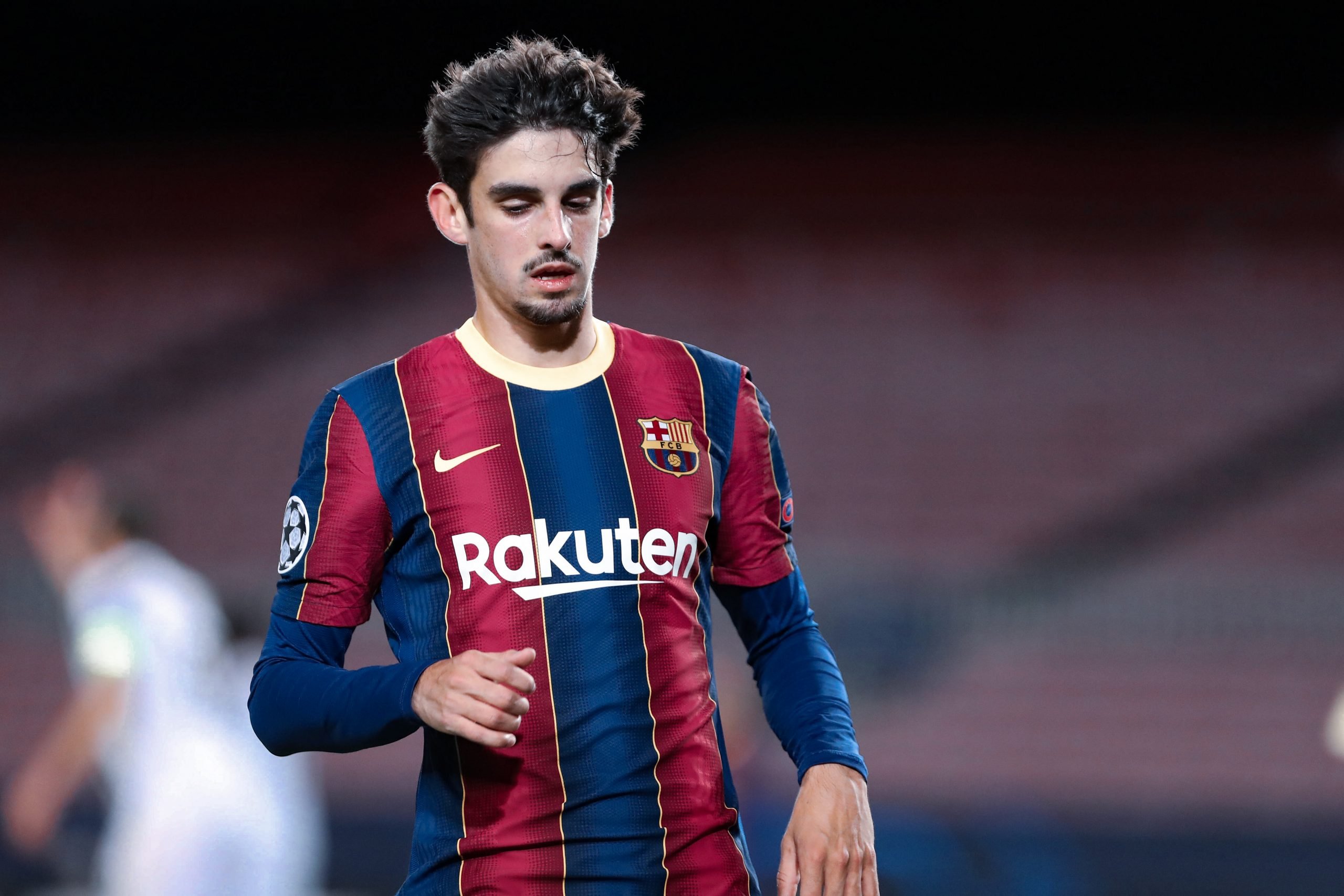 Francisco Trincao has not gotten off to a flying start at Barcelona. The Portuguese starlet has found himself amid immense competition for a starting spot in Ronald Koeman’s teamsheet. And so far, he has yet to show the quality which made Barcelona shell out €31 million to bring him to the Camp Nou from Braga.

The left-footed winger has had slight hitches so far in adjusting to life at Barça. This does not come as too big a surprise, considering he had only played 48 senior matches during his time in Portugal. For a player this raw, the step up to Barcelona is demanding and tricky. Maintaining confidence and fortitude is not an easy task, which has been quite apparent. But it is not all down to that. Several other factors could have made life difficult for Trincao at Barça.

Locking in assured game time at Barça is a big ask for any player, let alone a starting spot. Even more so, when the player comes from a foreign league without much experience to his name. Couple this with the recent crises Barcelona have gone through in these past few months, along with drastic changes in management and staff, and it all spells out a recipe for a rather unsuccessful stew.

The first important reason for Trincao’s stuttering start is the amount of sheer competition in attacking positions. Despite Ansu Fati’s lengthy injury layoff, Koeman has enough options to cause major selection headaches. And with the season’s schedule as gruelling as it is, rotation is necessary, making it even tougher for players to keep their sharpness intact.

Trincao had shown during his time at SC Braga, that he can be deployed anywhere across the frontline, however, his talents seem best utilized on the right-wing. This season, Barça have four other players who have started on the right — in Lionel Messi, a returning Ousmane Dembele and occasionally Antoine Griezmann and even young Pedri.

Should he play on the left, he has competition from Dembele and Pedri once again who are proving equally versatile. And more recently, Martin Braithwaite has also deputized on the left flank. The cycle of having to outperform these players to get more game time, but not being able to do so due to lack thereof has hindered the Portuguese winger.

The contrast in styles with Trincao at Barça currently, compared to his time in Portugal is very evident. By nature, he is very fluid. A player who loves locating spaces and exploiting them and creating chances through interplay with his teammates. His rhythm on the ball aids him further, as he is more than capable of taking on defenders.

All these traits were evident during his stint with Braga. An air of unpredictability and excitement arose every time Trincao received the ball. He showed directness with quick turns and bursts forward with the ball and vertical runs but also showed composure by linking up with his teammates to create more spaces or slowing play down and providing width.

From Trincao’s heatmap last season, it’s fairly conclusive that he played most games on the right-wing, and that maximized his output. At Braga, he was encouraged to invert and drift inside to link up with his teammates, but he offered much more. He made breaking runs through the centre as well as crosses from out wide, feigning to cut inside and then moving out, a move very similar to Ousmane Dembele.

The Portuguese showed glimpses of all these traits from a very early age, as he broke through to the Braga first team. His willingness to receive the ball in transition and move towards the goal is apparent since his days with the B team. He also didn’t hesitate to pull the trigger as soon as he found a decent shooting position.

Additionally, he would also keep bombing down the right flank and deliver crosses and through balls on either foot. Facilitated by his immense energy and spatial awareness, he also made intelligent runs in behind the defence.

There is one very prominent difference in Trincao at Barça with regards to his game. The lack of unpredictability. Every time he gets the ball, he seems to have only one objective — to cut inside. While this is one of his key strengths, it has made him extremely easy to neutralize.

His natural tendency to move into spaces is already limited due to the deeper defensive lines in La Liga. He cannot constantly hug the touchline since it does not allow the overlapping fullback much room and neither can he stay infield since there are already too many players occupying central areas. Due to this, he has not found himself in as many goalscoring or creating positions as he would like.

Thus, the lack of goal contributions. Another factor which is hampering his confidence and expressiveness. In his 18 games for the Blaugrana so far, he has managed only the one assist, a simple pass to Messi in the 4-0 win against Osasuna.

Koeman always seems keen on starting with a 4-2-3-1 setup but insists on using way too many similar profiles. Lining up with two or more players like Messi, Griezmann, and Coutinho is severely detrimental to a winger who likes to cut in. The aforementioned trio always prefers to stay central, and as Messi likes to drop deep and drive with the ball, Trincao’s role is highly restricted.

Add to this the strange periods of game time Koeman gives to Trincao and matters become worse. The 20-year-old is yet to start a game in La Liga, and as a substitute, he has played just more than a half of football. Merely 15-20 minute spells more often than not. Which, for a player trying to adapt to a new system, is rather comical.

Hence, there has not been much scope for him to adjust his style to match the defenders in Spain. Additionally, Koeman tinkering with the squad every time he has started in the Champions League means he has not had a way to get a read on his teammates’ styles either.

While at Braga, Trincao showed much more willingness with his actions on the ball. The statistics do not look all that great, but there is more to it than meets the eye. His pass completion rate of 78%, through ball success rate of 36% and long pass success rate of 39% don’t look all too glorious. However, they show how aggressively involved he was in the buildup. While his overall pass completion rate at Barcelona is higher with 81%, he is just not as involved.

At Barça, however, Trincao’s per 90 metrics are significantly more telling. He averages 18.2 touches per 90 — less than half of his tally of 38.4 at Braga. Since Barcelona’s central zones are so congested, he does not have enough runners to find with attempted through balls or long passes. The 20-year-old does not shoot anywhere near as often, either. He attempts 0.5 shots per game, which pales in comparison to his 1.4 shots per game at Braga.

So is there any light at the end of the tunnel for Trincao at Barça? Only time will tell. For starters, he has to notch his first goal. Sometimes that one crack can break the damn dam open. Barcelona is a club where players cannot afford to be shy. Much less someone as talented as Francisco Trincao.

With Ansu Fati still on the road to recovery, Trincao may yet have time to prove his value. But he has to make sure he capitalizes on every opportunity provided to him. Moreover, Ronald Koeman may need to alter his systems to get the best out of the Portuguese as well, even if it means temporarily. It is never a one-way exchange.

Trincao has received rather heavy critique due to his wavering form. But fans tend to forget that he is only 20, immensely talented but certainly unpolished. If he and Barcelona are to develop a harmonious coexistence, he needs a bit of time to start providing what he truly can. Culés have rightfully been very patient with Ousmane Dembele because his ability was bound to show after a point. The same patience must be afforded to Trincao who has not even played 20 games for the club yet.

If he’s constantly scrutinized and harshly treated before getting the chance to show his level under favourable conditions, neither he nor the club will benefit from it.