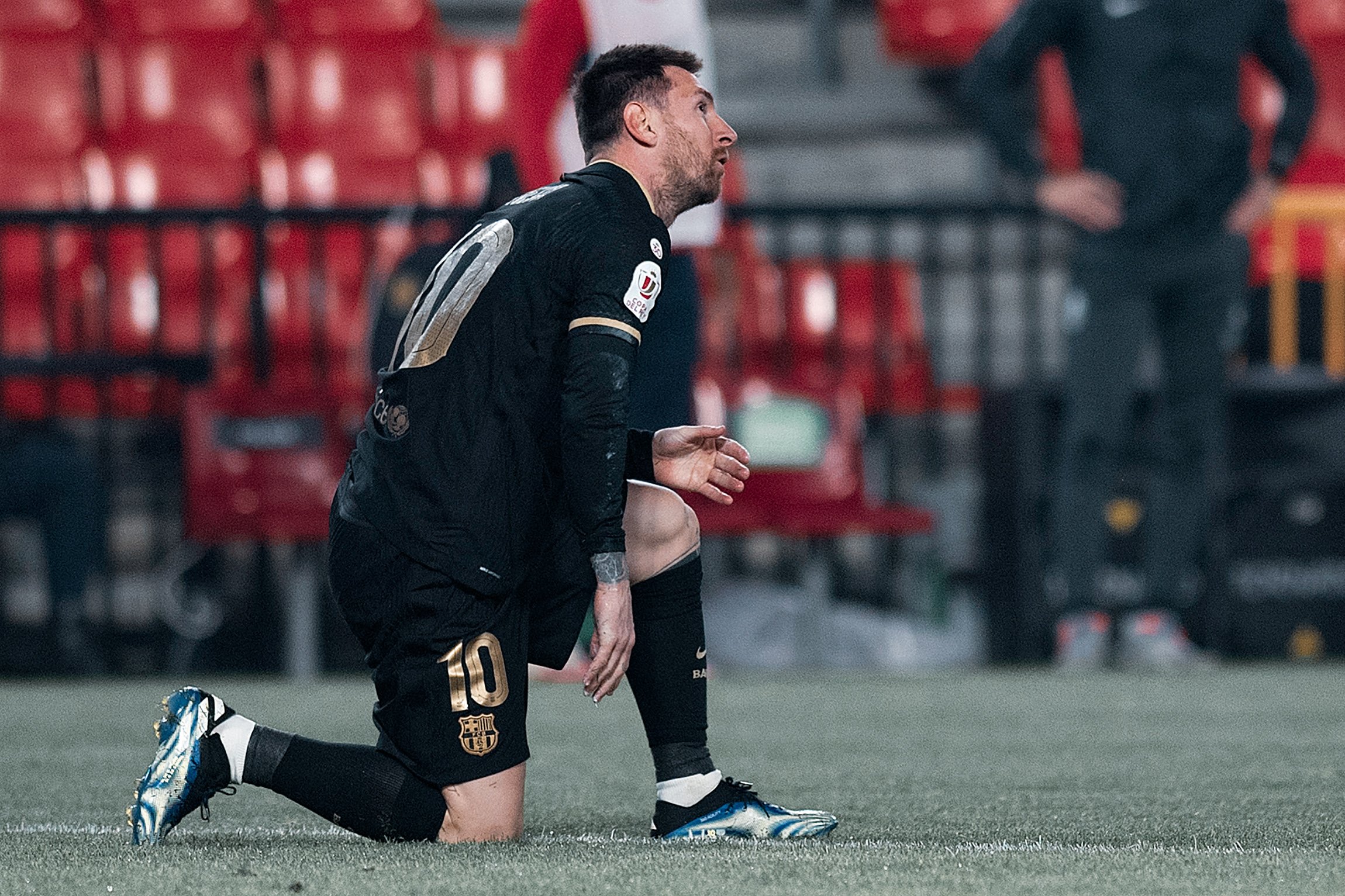 On the back of a 1-4 trouncing at home to Paris Saint Germain, Barcelona had the opportunity to extend their 7 game-winning run in the league to a phenomenal eight, and against probably the easiest of competition to do so.

After all, Cádiz were on the back of a four-game losing streak in La Liga, having won a meagre 5 points from a possible 33, and up against a team that had won 31 from their last 33. This was as perfect a game as they came, but, as has been a motif at the Catalan club in recent years, they crumbled under pressure.

Everything that could go wrong, did go wrong. The defence gave away two big chances, one of which came from a ludicrous and much too easily avoidable penalty two minutes from time. As for the forward line, despite having had eleven and a half chances more than their visitors to hit the back of the net, amassing a whopping 3.56xG, they could settle for only one goal, and this too from a penalty. Ronald Koeman had a mostly tolerable afternoon, but at this point, the complaints about the team make the ever-demanding fans sound like a broken record.

In this article, Barca Universal explores some events that have become all too common when the team faces minimal adversity, stretching from the managers in the dugouts, the pressure the collective falls over for in crucial moments and finally, individual mistakes which, like a bad rash, spread to all corners of the team continue to plague the club.

Barcelona’s last three managers, Ronald Koeman included, have each shown, and on plenty of occasions, certain character traits that, rather than improve the team, contribute to its inevitable downfall. What is most shocking is, despite being akin to water and oil in terms of their tactics, they each have an uncanny ability not only to fail to learn from each other but, more surprisingly, themselves.

Ernesto Valverde, Quique Setién, and Koeman have each shown a palpable level of a lack of tactical ingenuity whenever called upon. In one way or another, each one of them has taken the club farther and farther away from its roots, all while failing to replace them with anything sustainable enough to win points, or at the very least, make games enjoyable.

It comes as a shock that even in-game, whenever their set systems start to show fissures, neither one of them has consistently shown the most basic of requirements in a manager, this coming in their ability to rectify their errors.

In 2019, leading 3-0 against Liverpool, Barcelona needed just but a goal to gain a spot in the UEFA Champions League’s final. Rather than set his side up for an offensive tussle with the Merseyside club — who mind you were bereft of any real attacking talent —, the then manager deployed a controversial and rather defensive 4-4-2 formation, providing little to no width and with a clear disconnect between the midfield and the two up front.

Down by a just goal at half time, Valverde had the chance to add Malcom to attack the right flank given Andy Robertson had been taken off at halftime, but he opted not to. He had a chance to add Arthur Melo to improve ball circulation after conceding two in two minutes to Georginio Wijnaldum but instead decided to go for Nelson Semedo.

The sheer lack of order in the team, and his inability to react to reach the goals they scored, meant Barça would inevitably give up the aggregate lead and the tie as a whole. Impervious to criticism, he would continue to show this very same level of incompetence for the nine months that led up to his sacking.

Quique Setién did much of the same here too. Once admired for his Cruyffist tendencies, he fell apart under the unspoken power dynamics set in place by the heavyweights in the club, leading him to never make changes to his starting elevens regardless of how poorly an individual had played. Even when the game was crying for an intervention via a substitution, he, like Valverde, before him would cower in fear and take refuge in the dugouts, which for much of his tenure remained untouched.

Despite having three years worth of evidence on what not to do at Barça, Ronald Koeman continues to make the same exact mistakes as his predecessors. He at least makes rotations in the starting eleven every once in a while, but unless, of course, the team is in a comfortable winning position, he will wait until at least the 80th minute to effectuate any changes to the team’s shape, tactics, or personnel. Therefore, it comes as no surprise that almost every game that has seen Barca trail this season in La Liga has gone on to end as either a draw or a loss of all three points.

Against Paris, many fans observed the gaping holes left in between the defence at the halfway line and the poorly dispersed midfield and attack. This was at halftime, yet in the second period, he left it as it was rather than change up the team’s shape. The exact same mistakes occurred at home against Cádiz in both the first and second period and was only met with a change in the final minutes of the tie.

In La Liga, where the level is lower, managers can get away with a draw here and there, but in the Champions League, where every mistake is punished, they all falter, and to the surprise of no one. When push comes to shove, they all look clueless, lose their train of thought, and as has been the case in each of the last four years, the Blaugrana have lost and lost heavily to equal opposition.

It comes to reason that not every defeat is as a result of managerial or tactical mishaps. Sometimes, and as has been the case for many years now, tactical flaws have been compounded with some ghastly individual errors, some of which lead fans to question how it is that these players became professionals in the first place.

There are many games that can illustrate this, but none more so than Barcelona’s almighty collapse against the new sextuple winners, Bayern Munich. It is quite unjust that subsequent to such defeats, only the manager’s contract is cut short. Some of the mistakes made by the entirety of the team in that game were so blatantly unacceptable that at least half the team should’ve been sacked at the end.

A score of 4-1 against Paris, or 3-0 against AS Roma this year and in 2018 respectively could be attributed to a manager’s inability to take a firm hold of the game, but when it goes beyond five, it is imperative that the players, perhaps more than their manager, be put to question.

Despite the average age of the squad on that night being over 30 years of age, everyone on the team, from Lionel Messi upfront to Ter Stegen in goal, made rookie mistakes. Leading from the front, the Argentine couldn’t be bothered to press for the ball, despite his individual mistakes directly leading to a quarter of their goals.

Luis Suárez partnering him, made just eighteen passes, nine of which were from the centre circle at the start of one half and one for each of the eight goals that Ter Stegen, a man whose capacity to play under pressure, is being questioned more and more by the year, conceded.

The entirety of the team has this impeccable ability to collectively fall into pieces, with mentalities that shrink to the sub-atomic level when faced with the slightest of adversity. The usual suspects in defence, these coming in Jordi Alba, who almost singlehandedly won Liverpool the second leg at Anfield, Samuel Umtiti, whose career essentially came to an end after the 2018 world cup, Clément Lenglet, whose in-game reactions can be outpaced by a tortoise, are often the catalysts to the team’s failure.

Football is a team game, but individual errors often do have a profound impact on the collective. How is Barca supposed to be challenging for La Liga when their defence is the one with the most individual errors leading to a goal in the entire division.

How are clean sheets meant to be preserved when individuals like Clément Lenglet concede 3 penalties in the same campaign, each leading to a loss of points. It is borderline impossible to challenge for anything when half the time, in do or die situations, you have defenders that shoot themselves, and thus the team, in the foot.

But it’s not only the defence to be blamed. The attack and midfield, charged with finishing chances and creating an air of stability, respectively, do none of the like when called upon. Against the Bavarians, the midfield was essentially inexistent, with next to no pressing, and even when applied, none of it had any coordination or impact on the much superior German machine. Passing somehow from a trio or quadruple of players whose careers are built on just that, all inexplicably goes awry or loses all meaning at the slightest instance of pressure.

The forward line, as seen on innumerable occasions this campaign and during their European disasters, somehow collectively forgets how to find the back of the net. No one can be spared from this judgment, not even Messi.

Ousmane Dembélé had the chance to kill off the tie against Liverpool, but rather than blast the ball past Alisson in a 1v1 situation, he chipped it into his arms and did basically the same thing against Paris last in midweek when he wasted a chance to take the game to 2-0, only for the visitors to equalise within seconds. The same was the case as recently as yesterday against Cadiz, whereof 23 shots made, only one via a penalty found the back of the net.

Barcelona not only have to contend with managers who show complete ineptitude at understanding or implementing the one style of play asked if them, but also a team that, when needed to perform, has not the slightest idea how.

As Johan Cruyff once famously said, “football is a game of mistakes, and whoever makes the least mistakes wins.” When it comes to Barcelona, winning goes from something that should be a regular, weekly occurrence to a proverbial mountain crafted from the tiniest of anthills.

These errors span all the way from managers in the dugouts who, despite years of experience, keep making the same mistakes to the players on the pitch, who, through a lack of attention to detail, ridiculous mistakes and otherworldly missing, never cease to contribute to the demise of the team.