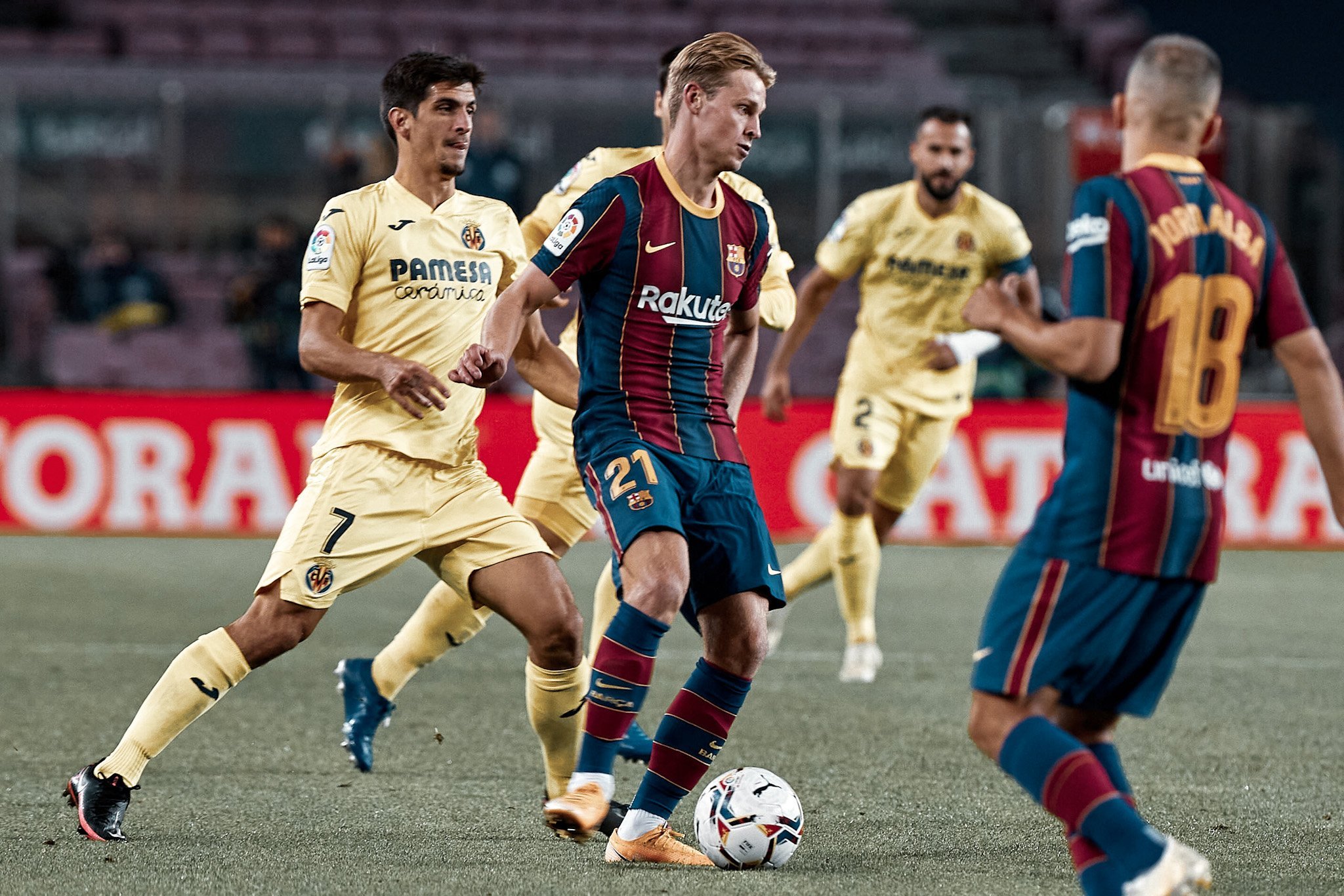 We are only three official matches into the campaign, but Barcelona has already produced a few moments of magic. Let’s go deeper into these moments – specifically the best passes from Barça – and look into how they transpired, as well as the numbers behind them.

We start off with the pass that created Barça’s first goal of the new season: Lenglet’s pre-assist to Jordi Alba, which went over the top of the Villarreal defense. With the Frenchman receiving the ball deep, Ansu Fati drifted centrally, drawing the opposition’s focus away from the left wing. However, bursting down that flank was Jordi Alba, whose pace was too much for Villarreal right back, Mario Gaspar.

Lenglet spotted the run and dropped in a beautifully-lofted pass ahead of the surging left back. As Alba retrieved the ball deep inside the Villarreal penalty area, he picked his head up and searched for one of his signature cutbacks. Arriving into the box was young Ansu Fati, who rocketed the ball into the back of the net with a first time finish.

With the pass, Lenglet bypassed nine Villarreal defenders and set the stage for Barça to open their account for the season. Additionally, the pass created an increase in expected possession value (EPV) by 4.01% – EPV measures the probability that the possession will end in a goal, in this case calculated based on ball location. So, Lenglet progressed the ball to an area where the likelihood of the team scoring was 4.01% greater than what it was at the location from which he played the pass. All in all, it was a crucial bit of play in order to break the deadlock, and further evidence of Lenglet’s brilliance in possession.

Sticking with the season-opener at the Camp Nou, we now have Frenkie de Jong’s excellent defense-splitting pass to Ansu Fati. With Barça already 4-0 up and building out from the back, Villarreal pressed high, bringing six players into their attacking third. As Neto played the ball out to Clément Lenglet, de Jong checked towards the left side of the pitch and found a massive pocket of space.

Lenglet picked the Dutchman out with another perfectly-weighted pass, which he let roll across his body so he could turn forward and scan the field. While this was happening, Ansu Fati had been making a hard run back towards his own goal, appearing to check in for a pass to his feet. Mario Gaspar followed Fati with a similar intensity, but as soon as de Jong was able to turn, it was the Barça winger who was ready to react quicker, as Fati spun away and surged forward into Villarreal territory.

In the vast open space that he had carved out, de Jong had all the time in the world to curve a brilliant ball through two defenders and into Fati’s path. With his weaker left foot, the youngster couldn’t pick out Antoine Griezmann in the center for a chance to add a fifth goal, but it was a brilliant passage of play nonetheless.

The through ball bypassed six defenders – Lenglet also deserves more credit for his ball into de Jong, which bypassed the first four – and increased the EPV by 2.37%. It was an exquisite display of movement, composure, and technique by de Jong, but he may have topped the pass in the very next match.

The Dutchman’s quality was on show once again for this play at the Estadio de Balaídos. With Barça getting forward on the counter attack, de Jong made his run out wide down the left flank, and was sent forward by Philippe Coutinho.

As he approached the Brazilian’s pass, de Jong spotted his target in the shape of Antoine Griezmann sprinting down the opposite side of the pitch. However, the two Celta center backs were dropping to make the angle very tight, and the pass seemed to be one that would be far easier for a lefty, which de Jong is not. Instead, the Dutchman played it first-time, on the run, with the outside of his right foot, so that it swerved around the two defenders and right into Griezmann’s stride.

Unfortunately, the Frenchman’s poor first touch took the ball right into a recovering Celta defender, and thus he failed to provide de Jong with the assist or even key pass which he very much deserved. It didn’t result in anything, and it technically only beat two defenders, but the quality of this pass cannot be overstated. Taking the ball from a largely unthreatening position out wide and putting it right into a massive danger zone saw the EPV increase by 4.83%. These kinds of plays are what make de Jong such an exciting talent, and hopefully we see many more of them over the course of the season.

Moving all the way to the back now to show some love to someone who usually doesn’t get much. After receiving very limited minutes last season, Neto has stepped in and started this new campaign in place of the injured Marc-André ter Stegen. While he may not be as talented as the German, Neto is still capable of making some great plays, including this ping to Ansu Fati.

As he received a back pass from Ronald Araújo, Neto faced heavy pressure from Celta, who were a man up after Lenglet’s red card. The Brazilian had just one touch to trap the ball, scan the field, and pick out his target, and he had to remain calm while doing so. Well, calm as you like, Neto launched the ball from just outside of his own six-yard box, up and over the right side of the Celta back line. It fell perfectly for Fati to run on to, and he took his first touch at least fifteen yards or so inside the opposition half.

Due to Fati receiving the ball and still being in a relatively wide area, far from goal, this pass did not increase the EPV as much as the others in this list. While an increase of 0.98% is brilliant for a keeper, that’s still only a fraction of what we have seen for the other passes. However, when adding the full context of the situation, it becomes more valuable.

The ball got Barça out of their own half and away from Celta’s heavy pressure, and into a position where the side could step, possess the ball with far more time and space, and look to launch an attack. Furthermore, this pass incredibly bypassed all ten of Celta’s outfield players, a truly remarkable feat.

The fifth and final pass for this list comes from Barça’s most recent showdown against Sevilla. While the match saw Barça drop their first points of the season and look largely flat and unentertaining for much of the ninety minutes, this play by the Uruguayan defender – like his overall performance – was certainly something to get excited about.

After receiving the ball deep in his own penalty area, Ronald Araújo showed his confidence, ability, and strength as he carried it forward. He actually bypassed three Sevilla defenders with this initial carry, but still faced heavy pressure. Despite a defender breathing down his neck, Araújo remained composed, and picked out an absolute peach of a pass to Ansu Fati.

The pass soared over the remaining seven defenders and dropped out of the sky onto Fati’s boot just outside of the Sevilla penalty area. The first touch was poor, though, and it sent Fati wide instead of towards goal. But that does nothing to discredit Araújo’s work. The combination of his pass – which increased the EPV by 3.54% – and his initial carry literally progressed the ball from box to box. It’s hard not to be impressed by Araújo’s potential.

We’ve looked at only a small sample size of passes and this is still very early days in the season, so there’s not many big conclusions that can be jumped to. However, there are two things in particular that stand out.

The first has to be the dynamism of Ansu Fati. He was the recipient of three of these passes – from Araújo, Neto, and de Jong – all of which were in behind the defence, and he even got up and scored after Lenglet’s ball to Alba. He possesses incredible quickness, and his movement is well beyond his years. These two attributes are invaluable for a Barça winger, as they allow the player to provide width, threat over the top, and far more space for their teammates. With these qualities and the performances he’s been producing, it’s very hard to see Fati losing his spot in this side.

The other major point that comes up in these passes – or doesn’t come up – is Lionel Messi. He was not involved in a single one of them, either as the passer or receiver. Looking further into the numbers shows more of this decreased involvement. So far this season, Messi is averaging only 0.16 expected assists per 90 minutes, which is behind Fati, Coutinho, and Busquets. Last season, he averaged 0.48 per 90, a tally that nobody else in the squad with at least 1,000 minutes played could reach even half of.

It may be only three games, but is this evidence of the side becoming less dependent on Messi’s creation? It’s not as if his creation has been poor – his 16 shot-creating actions lead the team by a mile, and his passes have actually created 2 own goals – but there are some promising signs in terms of players stepping up around him. If this can continue, and Messi can also get up to top form, the attack will be tough to stop.

Note: Expected assists measures the likelihood of the shots assisted by a player resulting in a goal, based on factors like the shot’s distance to goal, the shot angle, and the positioning of the goalkeeper. Shot-creating actions are the two offensive actions (pass, dribble, foul drawn) leading directly to a shot. Stats are from FB Reference.