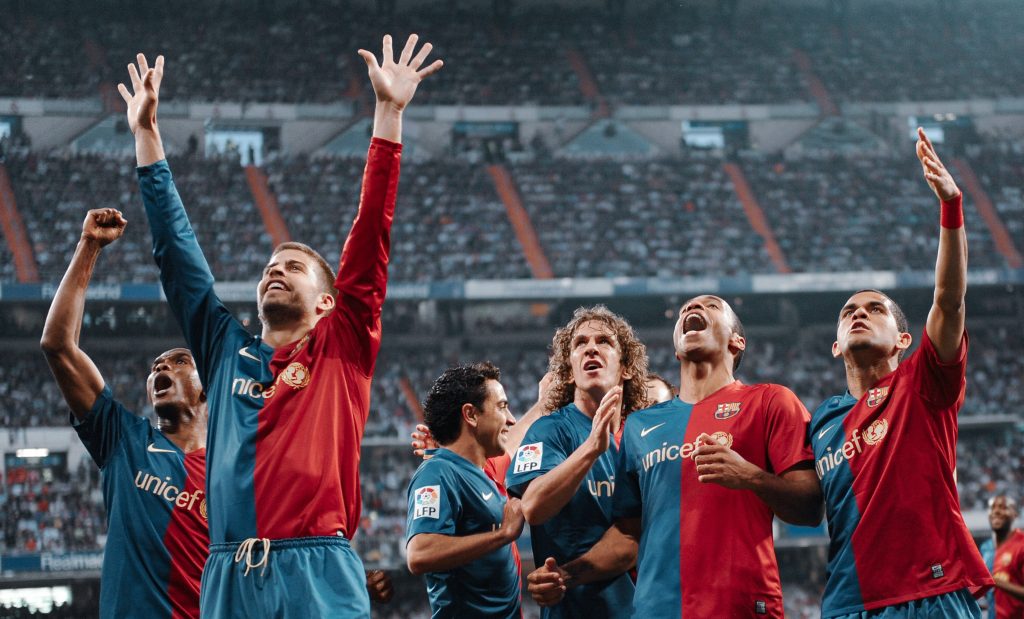 In 2009, Barcelona visited the Santiago Bernabéu and produced one of the club’s greatest performances with a 2–6 victory over Real Madrid, as explained in detail in this tactical analysis. Let’s go deeper into the statistics and analyse the match to see what made Barça so unstoppable that day.

Heading into the second Clásico of the 2008/09 season, on 2 May 2009, Barcelona were sitting four points ahead of Real Madrid at the top of the table, with both sides having played thirty-three matches. This meant that time was running out for Madrid’s title hopes, and they desperately needed Barça to drop points

With the Clásico being played at the Santiago Bernabéu, Los Blancos had their best possible chance to make that happen. However, as you all know by now, Barça were up to the challenge and produced a truly memorable display for the ages. These were the key aspects of the performance that allowed the blaugranas to pull off an incredible victory.

Note: All stats from StatsBomb data.

Dominance in possession and chances

In the typical fashion of a side led by Pep Guardiola, Barça completely dictated the tempo of the match. They had the ball much more than Real Madrid, and were far more efficient with it. This is reflected when comparing the match stats for the two sides.

With 210 more completed passes, as well as a higher pass completion rate, Barça were able to wear Madrid down by making them chase the ball. This meant that by the end of the match, the Real Madrid squad had applied pressure on the ball a combined 184 times, while Barcelona had just 115 total pressures.

With this conserved energy, Barça were able to be far more effective in the attack. The azulgranas had over three times more shots on target and expected goals than Madrid. Clearly, Barça were not just holding the ball, but they were also getting into better scoring positions, and doing it more often. This is shown further when looking at the locations of the shots and goals for both teams.

Each circle represents a shot, with the darker circles representing goals

While Madrid got a few decent shots from inside the penalty area – two of which were their goals – they were nothing compared to the volume of Barcelona’s. So, just how were Barça able to be so dominant?

Many remember this clash for the introduction of Lionel Messi as a false nine. Guardiola had come up with the idea of moving Messi to a central position while analysing Real Madrid in the build-up to the match. This is how Messi explained the role:

“He was going to put Samuel [Eto’o] and Thierry Henry on the outside, and I was going to play as the false centre-forward. I wasn’t going to stay there, but rather come out and join up with the central midfield. The idea was that Madrid’s centre backs would follow me out, and the two fast wingers that we had would go around the back”

This tactical adjustment is shown when examining the positions that Messi, Samuel Eto’o and Thierry Henry took up in the match. Here are heatmaps for the locations where they received passes:

As Messi talked about, he would take up central positions and drift back close to the center circle to pick up the ball from the midfield. On the left, Henry stayed extremely wide to give Messi space and options for a through ball. Finally, Eto’o provided the width on the right wing, before sliding over to the left after Henry was substituted off due to an injury. This balance of width and central presence – something which Barça’s current attack struggles with – gave Real Madrid’s defence nightmares.

This was especially on display for Thierry Henry’s two goals in the match. Both were assisted by through balls in behind the Madrid backline, with the first assist coming from a deep-lying Lionel Messi. Even for Barcelona’s sixth and final goal scored by Gerard Piqué, the attack was started with a Messi through ball to Eto’o out wide.

Messi in a central position, about to play a through ball to Henry for Barcelona’s first goal of the match

To make matters even worse for the madridistas, Lionel Messi and Thierry Henry were electric with their dribbling on the night. The two combined for 9 successful dribbles – 6 for Messi, 3 for Henry –, which gave Barcelona even more of an advantage, as the two forwards couldn’t be stopped one on one. Here’s where the successful dribbles of Messi and Henry occurred:

With Henry beating his defender down the left wing, and Messi doing so throughout the rest of the attacking third, the Madrid defence was constantly pulled out of position. It was clearly an incredible performance from the front three, Henry and Messi in particular, but the man of the match was probably in Barcelona’s midfield.

We all know Xavi Hernández is one of the greatest midfielders in the history of football, and this was one of his best performances. Every passage of play seemed to go through him, and there was no player on the pitch who had more impact on the match.

The Barça legend ended up leading all players in the match for attempted passes (105), completed passes (92), key passes (6), and assists (3). Take a look at the start and end locations of all of Xavi’s completions, with his key passes and assists highlighted:

Xavi’s completed passes in the match. Blue dot shows where he played the ball from, and each line travels to where it was received. Yellow lines show key passes, and red lines show assists

He was distributing the ball all over the pitch in a simple, but unpredictable fashion, which made his passes unstoppable. The best one of the match was probably Xavi’s long through ball for Thierry Henry’s second goal. You can see it on the pitch above, in the long red line coming from the centre circle, and here’s a better visualisation with Xavi about to play the ball:

The vision, intelligence and composure of Xavi were on display for this pass and throughout the whole match. He accounted for 17.6% of Barça’s total pass completions on the night, with the next closest player being Andrés Iniesta at 11.9%. On top of this, he supplied 50% of the team’s key passes, and assisted 50% of the team’s goals. This Xavi performance was truly something to behold.

Despite the two goals put in by Real Madrid, it was a strong defensive showing by Barça. After all, if a side attacks as much as the Catalans did, giving up only one open play goal is definitely acceptable.

As previously mentioned, Madrid were the team doing far more defending, with 210 fewer completed passes and 69 more defensive pressures. Notwithstanding, Barcelona made a total of 28 successful tackles and interceptions, while Madrid had just 21. So despite spending all that time chasing the ball, the home side performed significantly worse in terms of actually winning it back.

This shows just how much smarter and more efficient Barcelona were with their pressing. Here you can see the locations in which Barça pressed the most:

The noticeable hot spots are right around midfield in the centre of the pitch and on the right wing, as well as deeper into the left side of the defensive third. This seems to point towards Barça targeting the central and left sided players of Madrid with high pressing, while letting Los Blancos build down their right wing a bit more before stepping to win the ball.

It’s also clear that Barcelona’s pressing extended towards Real Madrid’s penalty area through the center of the pitch. This high central pressing was on display for Barça’s third goal of the match. With Madrid building out from the back, there were five Barcelona players in their half, closing down the space. When defensive midfielder Lassana Diarra received the ball, Xavi immediately stepped to him and put in a tackle.

From Xavi’s tackle, the ball fell right into the path of Messi who just had to carry the ball into the box and tap it past goalkeeper Iker Casillas. It was a brilliant example of Barça turning defense into attack with intense, intelligent pressing, something that has been lacking at the club in recent years.

In terms of individual defensive performances, the stats of three players stood out for Barça: Gerard Piqué, Dani Alves and Yaya Touré. They each made 5 successful tackles in the match, and there were two successful interceptions for Alves, along with one each for Touré and Piqué. That means that those three accounted for a combined 19 successful defensive actions, or around 68% of Barcelona’s total. Here are the locations where each of them performed those actions:

With a combination of these three winning the ball back defensively and the team’s solid collective pressing, Barça were able to fend off the Real Madrid attack for the majority of the match. Great sides always need a balance of attacking and defensive talent, and Barcelona had plenty of both.

What a brilliant team this was, and what a performance. No numbers or stats were needed to recognise the quality of this Barça side, but looking back on them makes the dominance even more impressive.

One of the contributing factors to this dominance was balance: balance of width and centrality, balance of possession and direct play to create chances, balance of La Masía graduates and the right signings. The list goes on and on, but all these factors together made this team close to unstoppable.

The quality of these past teams must be remembered and appreciated. It should be recognised that Pep Guardiola‘s Barça were possibly the greatest side to ever grace a football pitch. Nevertheless, while the greatness of that era may never be matched, the club has undoubtedly strayed far from the path it once followed. Hopefully improvements will be made to restore the correct balances within the club, and culés will be able to witness more performances like this in the future.

“Més que un club” is the saying that everyone knows, and for me it’s 100% accurate. Barça have given me so much over the years. Through all the highs, lows, triumphs, and heartbreaks, nothing can take away from the joy and entertainment I’ve received through watching this club play. Now, I hope that I can help spread these emotions with other supporters like me around the world.