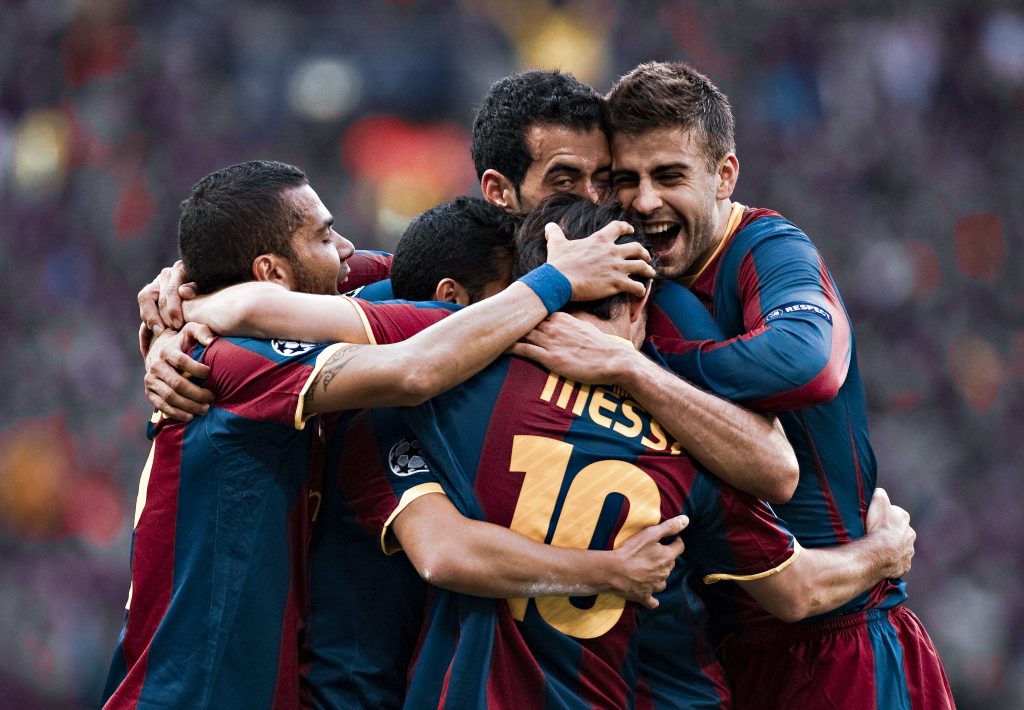 In May of 2011, Barcelona traveled to Wembley Stadium for the biggest match of the season. Against the champions of England, Barça rose to the occasion and produced one of the club’s most memorable victories. This is the tactical analysis on how Barça did it against Manchester United in the 2011 Champions League final.

With Barcelona knocking out Real Madrid in an El Clásico semi-final of the 2010/11 Champions League, and Manchester United breezing past Schalke 04 in their tie, the stage was set for a rematch of the 2009 final. There were legendary managers and players on both sides, and the two clubs had already won their domestic leagues that season. It was truly set up to be a remarkable event, and the pinnacle of the footballing world.

When it was all over, though, there was no doubt which side had been superior. Let’s go further into Barça’s play, and find the key aspects that created such an excellent performance.

Barcelona’s midfield on the night was made up of the legendary trio of Andrés Iniesta, Sergio Busquets and Xavi Hernández. The chemistry, intelligence, and technique possessed by each of them allowed Barça to completely dictate the tempo of the match. Here are the locations taken up by the trio to receive the ball:

Iniesta stayed in his traditional area, a bit advanced and to the left, where he would often find pockets of space to open up a passing lane. As the pivot, Busquets stayed central and was usually the deepest of the three. Looking at Xavi‘s positioning, though, you can see that he would pick the ball up mainly to the right side of the pitch when Barça were building out from the back. However, going further into the attacking half he would shift to a very central area.

The positioning of these three is perfectly highlighted just before Lionel Messi’s goal. As Barça had beaten the initial pressure and were looking to break down the United defense, Xavi pushed up and moved central. Iniesta stayed in his area to the left of Xavi, while Busquets stayed deeper.

With Xavi pushing up and in, Messi then dropped to become almost the right part of the midfield trio. In short, when Barça were building up, the midfield would have its traditional shape with Iniesta on the left and Xavi on the right just ahead of Busquets in the center. But as the ball advanced, Busquets would usually stay back, leaving the center of the trio open for Xavi to slot into, which then left the right interior space for Messi. Adjustments and fluctuations in positioning like this allowed Barcelona to dominate possession and wear down United.

The Red Devils could not figure out how to deal with this positional flexibility, and in the end, the numbers show just how dominant Barça’s midfield was. Iniesta, Busquets, and Xavi combined for 329 completed passes on the night, while Manchester United as a whole managed just 302. This was done with extreme efficiency as well, as the trio combined for a 93.2% pass completion rate. Even without mentioning that they supplied all three of Barça’s assists – one each – it’s clear how unstoppable this midfield was.

Messi at his best

While it may be impossible to choose one match as the best in the illustrious career of Lionel Messi, this one has to be a candidate. The Argentine was unplayable on the night. It was a performance that goes far beyond any words or numbers, but they can still paint some of the picture. To start, let’s look at the area Messi was positioned in for the match.

Messi was clearly in false nine mode, as he picked up the ball in very central positions. With Pedro Rodríguez and David Villa supplying the width in the front three, Leo had plenty of room to operate. He took full advantage of this space by constantly taking on United defenders, and he ended with an astonishing 13 successful dribbles. Here’s where those dribbles occured:

To put this tally of 13 in context, the whole Manchester United squad combined for the same number of dribble attempts as Messi (15), but they only completed 7. Out-dribbling the entire opposition is far from unheard of for Messi, but against a side of this caliber, with some legendary defenders and midfielders, it was a truly remarkable feat.

Looking at those locations also shows the centrality of Messi, with many being completed right through the spine of the pitch. Nonetheless, the most important and memorable of these dribbles has to be the one you see furthest on the right wing.

For this play, Messi did come out wide from his central position. When he got on the ball, Nani was the United player who closed him down. Let’s just say that if United’s defenders were having no luck stopping Messi, the Portuguese winger had absolutely no chance.

Messi drew Nani in, and then completely fooled him with a body feint to the left. This left Nani stumbling as the Argentinian burst to the right and took the ball into the box.

Then, after cutting inside of Patrice Evra, the ball bounced around and fell to Sergio Busquets. The Catalan laid the ball off to David Villa at the edge of the box, who supplied one of the all time great Champions League final finishes to give Barcelona a two goal lead.

That goal, along with so many more Barcelona attacks, began with one of many dynamic runs from the phenomenon that is Lionel Messi. On top of his dribbles, Leo finished the match with 4 key passes (passes assisting shots), 5 shots, and 1 incredible goal – which we’ll look further into.

We have discussed how Barça dictated the tempo of the match and progressed the ball through the midfield’s passing and Messi’s dribbling, but now we look at the end product of those moves. In total, Barcelona out-shot Manchester United 22 to 4. When examining the locations and expected goals of these shots, Barça’s dominance is even more clear.

Wayne Rooney scored with United’s only shot from inside the box, but after that the Red Devils were completely shut down. Barça on the other hand, racked up an abundance of shots from inside the United penalty area. The blaugranas best chances based on expected goals were actually missed from close range. Notwithstanding, the shots that did find the back of the net were of exceptional quality.

The first of these came from one of the unsung heroes of the Barça side: Pedro. Similar to the winger’s overall play, his goal may not have been the most spectacular or flashy, but it was just as important for the team. After receiving a pass from Xavi, Pedro still had much work to do to stay composed and slot his finish to the near post of Edwin van der Sar.

The Spaniard made it look easy in the end, despite Nemanja Vidić closing in on him, and despite the pressure of the game still being at 0–0. In a crucial moment, Pedro gave their much-desired lead.

Manchester United did respond well after conceding, and got their equalizer just seven minutes later through a Wayne Rooney strike. But once Barcelona calmed down again, it became clear that it was only a matter of time until they broke the deadlock a second time. That ended up occurring early on in the second half, with one of Lionel Messi’s best ever goals.

Pressure from Patrice Evra, another defender blocking the path to goal, and the massive frame of van der Sar could do nothing to stop this Messi thunderbolt. Barça had their lead back, and looked on their way to the trophy, but there was one more wonder-goal to cap it all off.

About fifteen minutes after the strike by Messi, David Villa clinched the victory with a finish of just as high quality. Following that Messi dribble down the right, Busquets teed up Villa for a shot from just outside the area. The composure, the technique, and the placement involved in the shot are a testament to the player Villa was.

All the boxes were ticked in Barcelona’s attacking performance on the night. The passing, the dribbling, and the finishing on display seemed to be unstoppable. However, the performance of the defense can’t be forgotten either.

The pair at the heart of Barça’s defense was Javier Mascherano and Gerard Piqué. While their impact on the match wasn’t as entertaining as the more advanced players, they played a crucial role in the victory. In terms of their ball playing, the duo easily dealt with Manchester United’s attempts to press, and they progressed the ball efficiently. These are the passes made by the two center backs, with their completions in white, and incompletions in red:

The two combined for 97 completions at an 84% completion rate, which allowed Barça to advance the ball and not lose it in dangerous areas. The defensive performance of the duo may have been even better, though.

We’ve discussed already how United managed only 1 shot from inside the box and 1 shot on target the whole match, and this was largely due to the play of Piqué and Mascherano. Both of them were extremely efficient when challenging to win the ball. Piqué attempted 4 tackles in the match, and all 4 were successful. Mascherano then chipped in with 2 successful tackles out of 3 attempts, as well as 2 successful interceptions out of 3 attempts.

In total, these two accounted for 8 out of Barcelona’s 13 successful ball wins, or 62%. The fact that they did so at an 80% success rate shows their intelligence and ability to read the game as well. Clearly, these two deserve a bit more praise for their efforts in almost completely silencing the Red Devils’ attack.

This Barcelona side are widely regarded as one of the best to ever grace a football pitch, and this match is seen by many as their most prestigious display. Both of those reputations are definitely deserved. The quality, dynamism, and chemistry on display across all areas of the pitch and all aspects of the game was truly something to behold.

There may never be a side like this again, but at the very least, we have to learn from them. The current Barcelona board, managers, players and fans have to recognise the things that made this team so successful. The spacing, positioning, fluidity, the chemistry and understanding of the system by La Masía graduates, these are all things that have to be better applied in the present day. While this may be challenging, this match is one example of the results when it all comes together.