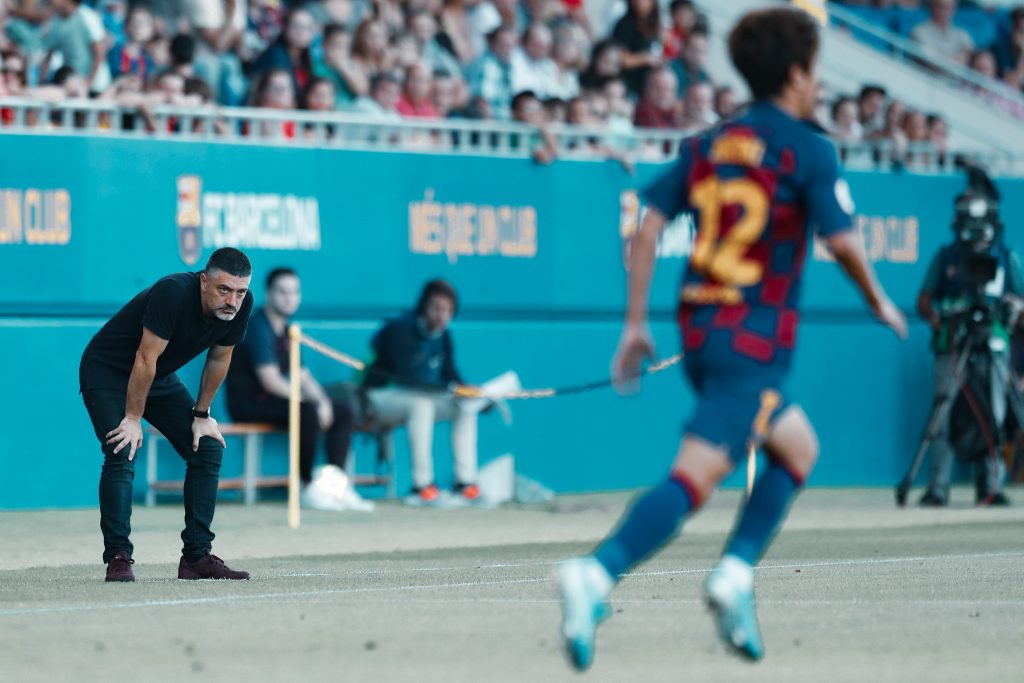 Barcelona announced on Tuesday the renewal of B coach Xavier García Pimienta, who will continue at the club until 2021 and with the option for an additional year. The experience, hard work and results of Pimienta have been meritorious. Excellent news for Barça to have him for longer.

There is no one more identified with Barça’s DNA than Francesc Xavier García Pimienta. Born in Barcelona in 1974, García Pimienta grew up in the football world since his childhood. At the age of 12, Pimi joined the lower categories of FC Barcelona, La Masía, two years before Johan Cruyff took over as the first team coach at Catalonia.

Pimienta’s time as a player was full of effort and of always following the same philosophy. As he progressed through the ranks of the academy, his hard work led to him reaching Barça B. Some time later, when he was 22 years old, he debuted in the senior team under manager Carles Rexach at Riazor, against Deportivo de la Coruña, on 26 May 1996. He did it as a winger. Xavier was part of the so-called Quinta del Mini, a bright generation from La Masía that, under the influence of Cruyff, included players such as Iván de la Peña, Albert Celades, Toni Velamazán and Roger García.

Unfortunately, Pimienta’s career as a blaugrana was synonymous with continuous loans to other clubs in the Second Divison B or Third Division. Until, in the summer of 1999, he finally left Barcelona and signed for CE L’Hospitalet, with whom he played for four seasons in Segunda B. García Pimienta’s last active campaign was the 2003/04, at EU Sant Andreu in the Third Division. With them, he recorded 22 games and scored three goals, before hanging up his boots at the early age of 29.

García Pimienta’s influence on Barça as a footballer was superficial, though, but Barcelona’s influence on Pimi was undoubtedly fruitful. Inspired by Cruyff, and following his ideals, Pimienta took advantage of his knowledge and instinct to start his coaching career in 2001, when he was still a player. He began in 2001, again at La Masía and as an assistant to Álex García at the Cadet A. In the 2002/03 season, the team won three titles – the Liga, Catalonia Cup and Spanish Championship – and was formed by nothing less than the likes of Lionel Messi, Cesc Fàbregas and Gerard Piqué.

After managing several teams at La Masía, García Pimienta spent two seasons as Barça B’s assistant coach from 2015 to 2017. At the beginning of the 2017/18 season, he was appointed as the Juvenil B’s manager, and soon after, as Juvenil A’s. Precisely with the latter they won the league and, most memorably, the UEFA Youth League in Nyon. Subsequently, he took over Barça B at the end of the 2017/18 term, after the dismissal of Gerard López.

Yesterday, more than two years later, FC Barcelona and Francesc Xavier García Pimienta reached an agreement for his renewal as the Barça B coach until 30 June 2021, with the possibility of extending it for a further year. The protocolary acts for the contract signature, with the presence of the responsible of youth football Xavier Vilajoana, will take place over the next few days. This extension undeniably is excellent news for Barcelona, and which will be of great importance for the future of club.

García Pimienta, with the B team, has had to overcome many difficulties and challenges, but the evolution the side and its talents have experienced in the past two seasons and a half has been commendable. Let’s analyse how the team is doing this course, as well as Pimienta’s future as a coach.

The dubious management of the current board affected the start and continuity of Barça B’s season. The injuries in the first team forced García Pimienta to not be able to rely on Ansu Fati, who was directly promoted from the Juvenil A, and Carles Pérez. Also, the likes of Riqui Puig, Álex Collado, Ronald Araújo and Iñaki Peña had been earning several call-ups too. This, it must be said, was excellent news for La Masía, as its young products getting opportunities in the senior side is always something positive.

Nevertheless, the incongruous sales of Carles Pérez and Abel Ruiz in January, along with the injury of Hiroki Abe, left Pimienta even more depleted of options. All this was a hard obstacle for the coach, who had to adapt to the situation. Fortunately, he adapted like a genius in doing impeccable work.

After an inconsistent start to the campaign, Pimienta’s team was able to climb positions in the Segunda División B. However, in March, the COVID–19 pandemic reached the football world, postponing most competitions, including Barça B’s. Fortunately, the great record of 49 points, three wins, ten draws and five defeats in 28 games had established Barcelona B in the second position of the table. Thus, this allowed them to qualify for the the play-offs for promotion to the Segunda Divisón A.

García Pimienta’s next challenge will be the first round of these play-offs. Valladolid Promesas, fourth in Group 2, will be their first rivals in the express play-off for promotion to the Segunda, which will be played in neutral grounds in Malaga. This encounter was determined in the draw that took place last Thursday at the Espigón de Levante in Puerto Banús. All ties will include a single leg and will be behind closed doors. Barça B’s meeting with Valladolid B will be held on Sunday 19 July at the Ciudad de Málaga Stadium at a time that is yet to be confirmed.

Is García Pimienta ready for the first team, or will he continue with Barça B?

Barcelona has recently been in chaos. A time bomb can explode at any moment, leaving enormous consequences. Real Madrid is leading La Liga, Barcelona has been dropping points along the way, the transfer of Arthur Melo, the dissatisfaction of fans with president Josep Maria Bartomeu, and the rumours of the possible dismissal of Quique Setién before the end of the season. Too much trouble to handle.

The latter rumour involves García Pimienta. In the event of Setién’s departure, before the end of the season or at the end of it, there is the possibility of Pimienta being named the next coach of Barcelona. Or, at least, he would be one of the main candidates to replace Quique if the board does not manage to convince Xavi Hernández.

“I see myself ready for the first team”

Without a doubt, García Pimienta is the most prepared and knowledgeable man available for this position. He has done an amazing job at La Masía and is perfect for developing the young talents. However, aside from him being ready, there are also doubts about how La Masía would be handled without him, or about whether he would have enough character to handle the senior team’s big stars.

In any case, García Pimienta certainly deserves a chance, so why not? Although Quique Setién also deserves to start a new season to properly introduce his methods, it is the future what will have the answer. At the moment, though, García Pimienta must be congratulated on his achievements, and wished all the luck in his future challenges that, for the club’s good, should always be linked to Barça.

• Late substitutions: Is Quique Setién crumbling under the pressure?