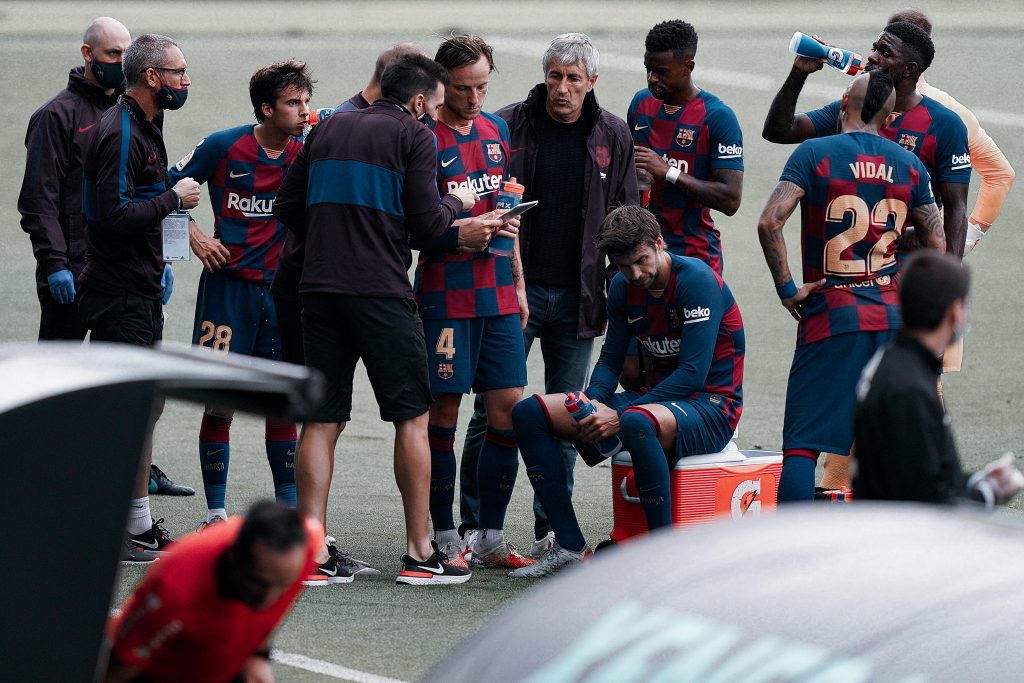 Quique Setién’s recent line-ups have not convinced the culés whatsoever. It is time Barcelona leave the old guard and dressing room politics behind and trust in youth again.

FC Barcelona are the most political club in world football. This gargantuan side from the northeast of Spain is one of the most successful in Spanish history, but politics always led it. During the Franco regime, Barcelona were the club of the resistance, with the Camp Nou being bombed in 1938 due to the institution’s political views. Now, they are still politically led. For example, they still have the Senyera on their badge, to show which side the culés stand on concerning the separation of Catalonia.

However, far from actual politics, the Catalans are still the most political club in the world. The elections, mandates and ruling of the club make it as though the club has its little society, where people from all parts of the world can associate. Between players and managers, debates surrounding politics and how the coach should manage his squad is always a hot topic.

Coach Pep Guardiola wasn’t the friendliest of men, especially with players he did not like, such as Yaya Touré and Samuel Eto’o, but he knew how to grasp the attention of his players when he wanted to. Luis Enrique had this type of charisma too, and he never backed down when he had clear ideas, but he came at a wrong time, where the politics of the club got messed up. His predecessor, Gerardo Tata Martino, suffered a lot during the Sandro Rosell days, the same man that managed to suck the love for Barcelona out Pep Guardiola’s system.

After Luis Enrique succumbed to the pressure, Ernesto Valverde succeeded him, but something was off. No palpitating press conferences, no hunger, no nothing. Valverde seemed to be a robot whenever he coached the team, and sometimes looked as if he picked the team because of the name behind the shirt and not the form on the pitch.

Of course, el Txingurri got results. Winning two La Liga titles is no small feat. But he also had his failures with squads that shouldn’t have been on the pitch. The best example could be Philippe Coutinho. The Brazilian spent one year eating up minutes other players could have profited from by playing like a ghost, showing once or twice in a full campaign.

Quique Setién
in his presentation as a Barça manager

With Valverde’s sacking bringing Quique Setién to Barcelona, culés all over the world thought all this favouritism would change. To be fair to the fans, Quique sold everyone dreams in his first press conferences by saying that he would pick teams on merit and not because of reputation. Well, he hasn’t done that since coming.

In his first games, he showed some character by subbing on youngsters Riqui Puig against Granada or Álex Collado at Valencia’s Mestalla. The loss at Mestalla was a tough one to take, and Setién changed something that day. He reverted to Valverde’s way of picking players, and Riqui got limited minutes while Collado is yet to see the pitch since that 2–0 loss to Valencia in February. Supporters would see ageing and tired stars get underserved game time.

After quarantine, Barcelona fans saw Ronald Araújo in the line-up in Mallorca and thought that the former Real Betis manager took the time to figure in those three months without football. Luis Suárez got a cameo in that game but looked as if he wasn’t going to start a week later on Seville. Setién said that the Uruguayan striker wasn’t fit enough to play the whole 90, but that’s precisely what Suárez did at the Ramón Sánchez Pizjuán. Despite more than poor performances in the league prior to the Celta game, Suárez got the nod every time, eating up the minutes of Ansu Fati, Martin Braithwaite and Antoine Griezmann to an extent.

Now, after yesterday’s 2–2 draw at Balaídos, culés were left wondering why didn’t Araújo start in front of Umtiti. The Uruguayan defender had a stellar performance two weeks ago and seeing Samuel Umtiti, who sacrificed his knee for the World Cup in 2018, start ahead of him was a little irreverent by Setién, a man who never holds anything back when talking.

A debate is growing at the Camp Nou

Many people are starting to believe the younger players have deserved a place in the squad over the veterans, but it seems like these old stars do not want to sit on the bench for too long. How long can a team get impressive results with old and tired legs when they have younger blood through their ranks? Why did Riqui Puig have to put on a superhero suit against Athletic Club to deserve a start in Vigo? Don’t these old heads know how to keep fit?

These questions have emerged, and rightfully so. Playing the old guard every match, with this hectic schedule, is suicidal. Yes, Gerard Piqué, Luis Suárez, Arturo Vidal or obviously Lionel Messi are world-class stars. Still, they are all over 32 years old now; it is not sustainable to keep them playing their whole life, especially when kids like Puig at 20 and Fati at 17 are loving life in their city and look as though they are ready to take over.

“I’m not equivocal when it comes to assessing players from the academy. I’ll give the youngsters a chance when I can count on them to win games”

Riqui, Ansu, Aleñá, Araújo or Collado have to put on so many brilliant performances to get the call once. Still, Samuel Umtiti, Vidal or Suárez just have to make a tackle, score or defend well during a game to get unlimited game time. It’s a far cry from Quique’s first words when he became the blaugrana coach, and this blindness leaves fans perplex on a day to day basis. This whole situation is the reason why Eric García is enjoying life in Manchester when Barcelona actively search for Piqué’s replacement, for example, or why many other hot prospects have been leaving La Masía in recent years too.

Of course, the team cannot rely on kids to guide them to titles, but they cannot rely solely on old and experienced players, sometimes younger is better. Barcelona will be second in the league if Real Madrid win or draw against Espanyol, and the culés need to find a solution to their problems quickly. Trusting in youth is the way to go.