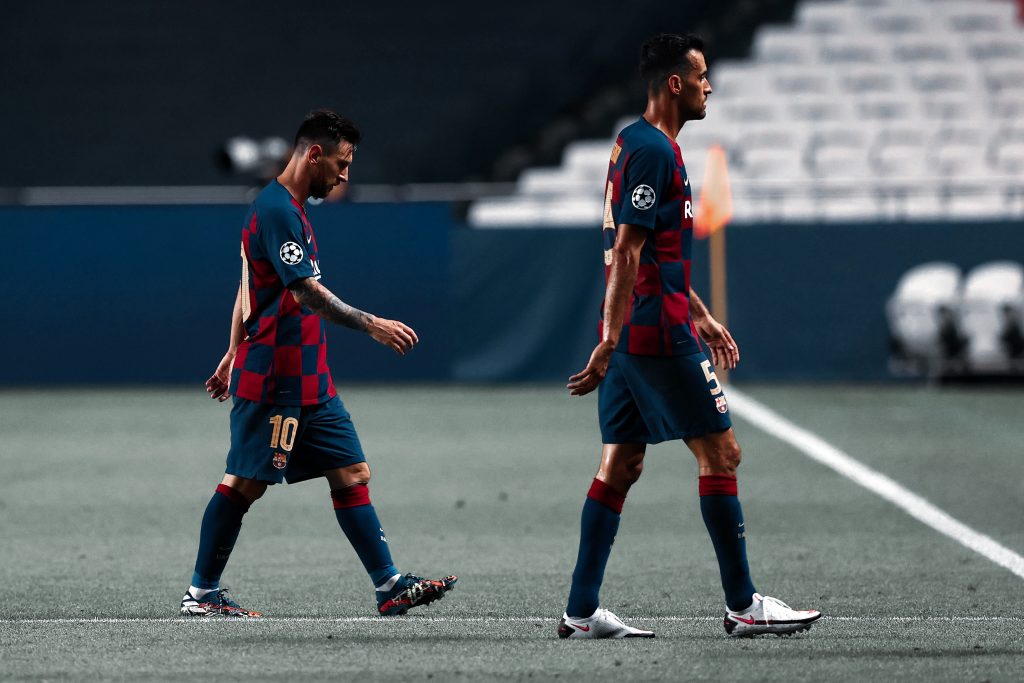 The lack of selflessness and cohesion has led Barça to disaster, but their lack of leadership has also been very evident in the most recent and painful defeats.

“We still have some unfinished business in the Champions League –– more than anything –– because of the way we were knocked out of the competition”. That is what Lionel Messi said in August 2018 after the Joan Gamper Trophy match between Barça and Boca Juniors. Fast forward two years, “we have reached rock bottom” from a visibly upset Gerard Piqué expressed after Barcelona’s shameful loss against Bayern Munich.

How can a team belonging to one of the most legendary clubs ever, including the best player to ever play the game, after spending more than €1 billion in the last six years, still lose and lose in such a shameful way after conceding eight goals? The reasons are plenty, but there is something that no tactic or technical advancement can fix: the lack of character this team has shown.

For Barcelona, the Champions League was a priority this season. After winning La Liga four times in five seasons, the significance of being Spanish kings might have faded slightly for the blaugranas. Similarly, the dominance they have exhibited in the Copa del Rey might have diminished the importance of the trophy in the squad. However, Barcelona were very hungry for the coveted Champions League. Since the 2014/15 season, the Spanish side has been unable to win the trophy.

Apart from this, the fact that eternal rivals Real Madrid won the competition thrice in a row just made the Catalans hungrier for this special victory. That’s why Messi’s words in August 2018 were so significant. A god-like figure in Barcelona, yet the Argentine genius seldom speaks publicly and almost never this passionately. The culés hung onto Messi’s words, everyone hoped for a Champions League in the last two seasons, or at least an indication that it could soon if not immediately return to Barcelona. That’s why this loss against Bayern Munich was much worse for the club than people all over the world think.

Now, Barça are in a state of chaos after the loss –– even more so than what has been the recent norm. Two managers have been sacked this season, technical director Éric Abidal has been sacked, the fans have completely turned against the current board and worst of all, it no longer seems impossible that Messi may leave. The loss has shaken the club to its core, but it has affected the fans incredibly as well.

People who spend their life supporting this club, people whose lives have always revolved around football and those who cling to the current Barcelona squad to replicate even a small portion of the golden days they grew up seeing, all of them had to watch as the eleven players in claret and blue conceded eight goals and they had to watch as their captain, the best player they have ever seen, helplessly looked on, almost as much a spectator as them.

Barcelona’s problem leading to the loss isn’t just the rigidity solely, neither is it only the lack of directness or the sluggish play they have exhibited. It is a problem at the psychological level. The players look as if they are afraid of the Champions League and as if they don’t possess the character that winners do.

As the match against the Bavarians went on, there came a point around six goals in when the Barça players were all still and static. Nobody was even making the crucial runs, nobody was hungry for the ball and looking to create. Nobody was telling their teammates not to lose hope or to keep trying. Even the manager was standing with his arms crossed, looking rightfully worried. This lack of character was further emphasised when the team apart from Barça B midfielder Monchu departed from the back entrance of the training facilities to avoid the fans.

Messi is the kind of leader who leads by example. But when his magical performances fail, he may not be the best captain. Gerard Piqué does try but he is not enough alone. Sergio Busquets and Sergi Roberto don’t have that fiery spirit that Barcelona’s captains need. Barça need a person like Carles Puyol. Not because of his superb defending or great ball-playing ability, but because of his character.

Can anybody even imagine Puyol standing still the way the entire team did when they were down by five or six goals? Does it seem like Puyol would leave from the backdoor to avoid the fans? The blaugranas desperately need a leader like Carles Puyol. Even against Liverpool or Roma, Barcelona seemed like a team without character towards the end. The players needed a player who can lead them into battle the way their old captains did.

“Does he want to spend his time left in that shirt given the performances and the way the squad is looking at the moment in comparison to other teams around Europe. Has he got the time to sit there and wait?”

These problems with character are the most dangerous. Even with the best players in the world, if you have 11 players who are scared of taking risks and who keep remembering their past mistakes, it won’t work out. This dismantling of Barcelona by Bayern raises further questions. The most worrying one is: could this defeat be something that along with the terrible administration tips over Messi towards leaving the club? Will this specific squad even have the belief that they can win the Champions League? After the current loss, who is going to stop Barcelona from spiraling out of control? It seems like Barça will have to make every decision perfectly now to avoid becoming fallen giants.